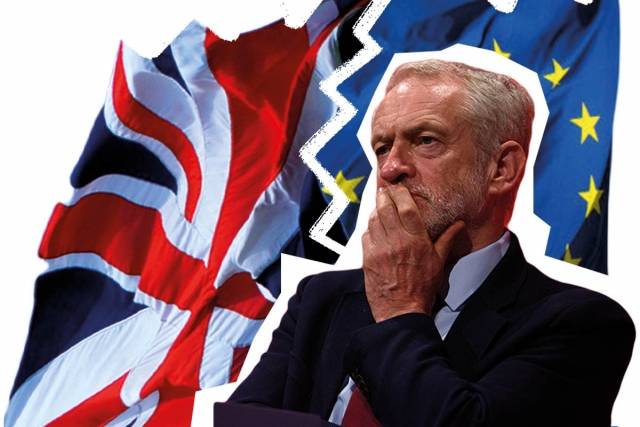 With the triggering of Article 50 and an upcoming general election to be fought primarily over the issue of Brexit, there has been much debate about Labour’s position on this key question and how it and the wider labour movement should respond to the Tories’ Brexit plan.

In a public announcement yesterday, Sir Keir Starmer, the shadow Brexit secretary, attempted to shed some light on this question. Following a series of uncomfortable contortions and fudges by Starmer, however, many voters will be left none the wiser than they were at the start.

Accepting the Brexit vote, ruling out a second referendum, and acknowledging the need to leave the single market and restrict the free movement of people, Starmer was left with only a handful of nuanced promises to differentiate Labour’s plan from May’s hard Brexit commitment.

For example, environmental protections and workers’ rights will be kept; EU citizens currently living in Britain will be guaranteed continued residency; and the possibility of staying in the tariff-free customs union would be left “on the table”. Meanwhile, a Labour government, Starmer announced, would seek a transitional agreement to ensure that Britain does not crash out of Europe, and would “guarantee that parliament has a truly meaningful vote on the final Brexit deal”.

But as Iain Watson, the BBC’s political correspondent, commented, “some in the audience were privately worried that the differences with the Conservatives were too subtle”. As with Ed Miliband’s “Tory-lite” programme of austerity in 2015, many workers - seeing little difference between the Tories and Labour - will plump for the real deal and vote for the more resolute leader when it comes to Brexit: Theresa May.

The only way forward for Corbyn and Labour is to draw a clear line in the sand and fight this election on the basis of a bold alternative of socialist policies.

Between a rock and a hard place

All agree that Labour currently finds itself in extreme difficulty. In the current environment, where either a disastrous Tory Brexit or a “soft” alternative dictated by the needs of the City of London are the only options being served up by capitalism, Corbyn and the rest of the Left leaders are finding themselves squeezed out.

Representing both staunchly pro-Leave and pro-Remain constituencies and under pressure from all sides, the Labour Party has awkwardly shifted its position between that of the Tories and the Lib-Dems, and at times attempted to combine the two approaches.

On this basis Corbyn has nothing to win and everything to lose. Supporters of hard Brexit will consider May’s position to be “stronger” and therefore preferable, while voters who support Remain, particularly in Labour’s more middle class constituencies, will consider Corbyn’s position an unacceptable concession to Brexit.

If Labour is to succeed, it must have a position which is independent of both the Tories and their Lib-Dem counterparts. But for any programme to be truly independent, it must base itself squarely and solely on the interests of the working class. A genuine socialist programme must be the starting point for any consideration of the various challenges posed by Brexit.

British big business seeks access to the single market in order to sell their goods and services and boost their profits. This is the reason why the Blairites and the Tory Remainers, who faithfully represent the needs of the capitalists, make continued access to the single market the fundamental pillar of their programme in relation to Europe. “Labour should be fighting for Britain to stay in the single market,” Chuka Umunna, a leading Blairite rebel, has sternly stated, “not turning a blind eye to its advantages.”

It is on this question of the single market, however, that the contradictions facing the Labour leadership are most clear. Rather than fighting for a bold socialist alternative, Corbyn and the other Left leaders have unfortunately tangled themselves in knots regarding the capitalist European single market.

This was demonstrated by the position put forward in yesterday’s Labour Brexit plan announcement. On the one hand, Starmer asserted that “retaining the benefits of the single market and the customs union are our priority”; on the other, the shadow Brexit secretary acknowledged that leaving the EU would also mean leaving the single market.

Considering that only membership of the single market and customs union can “retain the benefits” that these pillars of the EU have to offer, this suggests that if Labour were to abide by its own test it would likely vote against anything short of a miraculous deal. But at the same time, as Starmer explained, Labour would not be prepared to see Britain crash out of Europe without a deal. And so the contradictions pile up for Labour from the start.

Access to a capitalist market is no panacea for the problems facing the working class, such as unemployment, zero-hour contracts, low pay, the lack of housing, extortionate rents, or the collapse of the NHS and social care. Neither can any capitalist trade deal solve these problems. If Labour is to pose a meaningful alternative to Tory Brexit, it must provide an urgent solution to these fundamental issues.

We need a clean break from both May’s Brexiteers and the Lib-Dem Remainers, with a demand to “take back control” of the real powers in society - the banks and monopolies - so that we can implement a socialist plan of production and provide a real solution to the issues of jobs, housing, and public services.

An important feature of the debate over Brexit is the question of workers’ rights. The government will use its newfound legislative freedom to tear up workers’ rights, regardless of May’s false promises. Indeed, Tory MPs John Wittingdale and Michael Gove have already advised Britain’s bosses that they should examine “the opportunities which may exist [as a result of Brexit] to reduce the burden on business”.

Starmer, recognising the Tories’ desire to turn Brexit into a bonfire of workers’ rights, emphasised yesterday that Labour would “make sure that all EU-derived laws – including workplace laws, consumer rights and environmental protections – are fully protected without qualifications, limitations or sunset clauses.” 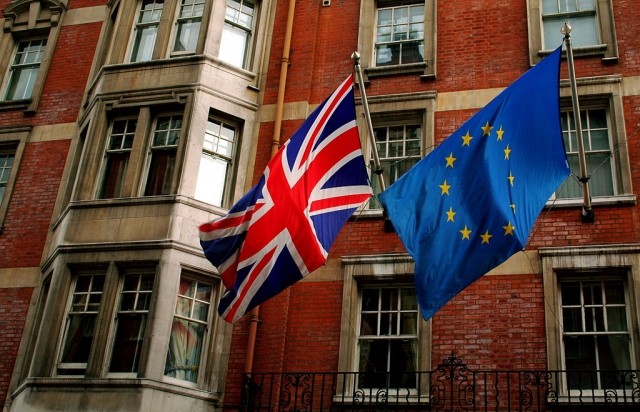 Such promises from Starmer and Labour are to be applauded. The question arising, however, is how the labour movement can realise these promises in practice. As Karl Marx once stated, when the working class is disorganised it is nothing more than raw material for exploitation. We can see the truth of this statement playing out before our eyes in Tory Britain.

The fact is that workers in Britain have already seen a wholesale attack against their rights over the past period, despite the so-called “protection” of the EU and its courts. Indeed, as a capitalist bloc, the EU cannot offer a defence of workers’ rights, as the case of Brussels-and-Frankfurt-imposed austerity in Greece and other countries show.

For example, a report by the ONS, published in 2014 stated that the number of so-called “self-employed” workers (in reality those working in the most precarious conditions) reached its highest level “since records began”: 4.6 million people, or 15% of the total workforce. Likewise, the number of workers on zero-hours contracts, rose to almost 1 million at the beginning of this year.

As has been widely reported, the conditions in workplaces which rely on these super-exploitative contracts hark back to the “dark Satanic Mills” of the industrial revolution, with one Sports Direct worker reportedly giving birth in her workplace toilet because she feared she would effectively be sacked if she went to the hospital.

Even those workers who have ‘normal’ employment contracts have suffered attacks on their rights. In 2012, the Tories (and Lib-Dems) increased the qualifying period for unfair dismissal claims to two years, meaning that employers could in effect sack employees at will. In 2015, a survey conducted by the TUC warned of a return to “Burnout Britain” as almost 3.5 million people in Britain worked longer than 48 hours a week, the maximum allowed under the European Working Time Directive.

If that isn’t enough, in 2013, the Tory-Liberal coalition introduced non-recoverable Employment Tribunal fees, meaning that those workers whose rights had been infringed would have to gamble up to £1,200 for the privilege of bringing their case to court. In January this year, a government review reported that the number of cases being brought to Tribunal fell by a staggering 70%. All of these outrages occurred (and are occurring) under the jurisdiction of the EU’s courts. The result is the Dickensian conditions we see today.

The British labour movement must fight against the attacks on workers threatened by Brexit, beginning with the fight to recover all that has been lost.

The trade union leaders must begin a united, militant campaign to shut down exploitative practices across the UK and organise workers in the most casualised industries. For too long, workers in precarious industries have been left to the tender mercies of unscrupulous bosses. The unions should boldly go to these workplaces, organise the workers (who are already beginning to organise themselves in inspiring fashion, as in the case of the Deliveroo drivers) and prepare their forces to act in solidarity with all workers under attack, even if this means breaking the law.

The Labour Party should carry this fight into parliament, campaigning alongside the unions to repeal all anti-trade union legislation, ban zero-hours contracts, abolish Employment Tribunal fees and bring an end to sham self-employment.

Faced with such mass opposition, including mass co-ordinated strike action, May - even if she wins the election in June - will be forced to think twice about any legal attacks she makes in parliament.

In addition to the question of workers’ rights, the question of immigration has been a prominent feature of the Brexit debate. Decades of stagnating or falling wages, the shortage of housing stock, and failing public services have given rise to deep anxieties and concerns in the working class, which have been unscrupulously used to whip up divisions and added grist to the mill for bigots and charlatans like Nigel Farage who sow distrust and xenophobia everywhere. Seeking to capitalise on this in true Tory fashion, May has made it clear that “controlling immigration” is a priority for the government during its negotiations with Brussels.

Whilst promising to protect EU citizens currently residing in Britain, however, Starmer’s announcement yesterday offered little difference to the Tories on this question, with the shadow Brexit secretary stating that the Labour leadership “recognise that immigration rules will have to change as we exit the EU”. As with Miliband’s 2015 general election commitment to cuts with a kinder face, we now have controls on immigration...but with a kinder face.

Instead of pandering to the Tories’ calls for controls on immigration, the Labour leaders should be offering a real solution to the scandals of falling wages, insecurity, housing shortages, unemployment, etc.

But that means to challenge the capitalist system head on. It means taking over the banks and big monopolies that dominate the economy and working out a democratic socialist plan of production. All nationalised industries should be run under democratic workers’ control and management.

Such a bold programme would mean jobs for all; a living wage for everyone; the building of a million per houses a year; a 32-hour working week, with no loss of pay; retirement at 55 on a decent pension; and a massive rise in living standards. Such a programme, eliminating all scarcities, will cut the ground from beneath the racists and xenophobes.

Of course, the capitalists in Britain and elsewhere would attempt to sabotage such a programme from day one. Therefore, this struggle must be joined with that of the workers throughout the rest of Europe. 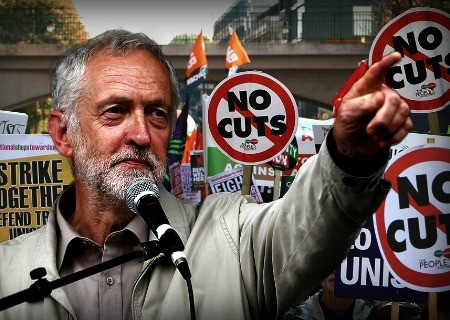 Only in this way can Corbyn and Labour hope to win this upcoming election, stop the horrors of a Tory-led Brexit, and provide a genuine alternative for workers, the youth and the poor.