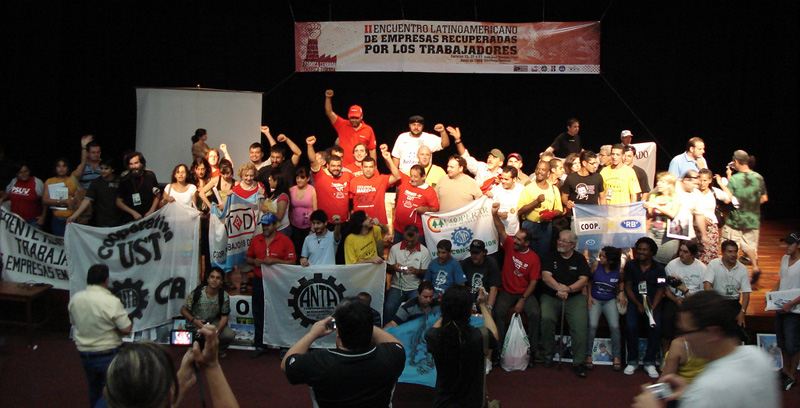 This resolution was passed at the 2nd Latin American Gathering of Workers in Occupied Factories in Caracas, on June 25-27.

The 2nd Latin American Gathering of Workers in Occupied Factories wishes to express our support to the revolutionary movement of the Iranian masses against the Islamic Republic, and particularly to the movement of Iranian workers for their democratic rights and economic demands, while rejecting at the same time any imperialist interference.

The images of brutal repression against the youth and workers of Iran and the realisation that in Iran a young student or a worker can go to jail for the simple act of organising a strike, creating a trade union or demonstrating against the state or the bosses, has caused a massive outrage against the Iranian government on the part of workers and youth all over the world. Several counter-revolutionary intellectuals and the mass media at the service of imperialism, conscious of this, are attempting – with the cynicism and demagogy which characterise them – to identify Venezuela with Iran, and an honest anti-imperialist and revolutionary president like Chávez with Ahmadinejad. This Gathering rejects these allegations.

Like in 1979, Ahmadinejad has used anti-imperialist and pro-poor rhetoric, in an attempt to win support from the masses. But let’s have a look at what the real conditions of the Iranian people are under his presidency. First of all, in Venezuela, the Bolivarian revolution has unleashed a wave of trade union organisation and militant struggle on part of the workers. President Chávez has called on the workers to occupy abandoned factories and to run them under workers’ control. In Iran the workers have no right to organise or to strike and if they break these laws they face the most brutal repression. In the case of the Tehran bus drivers, when 3,000 of them attempted to organise a union, the company replied with mass sackings, and the police attacked the trade union leaders, including the general secretary Osanloo, whose tongue the police thugs attempted to cut off.

For all these reasons, we make an appeal to workers all over Latin America to support actions in solidarity with the Iranian workers and people who have risen against the capitalist government of Ahmadinejad, and to help clarify the confusion that the media is trying to sow about this movement of the oppressed masses and the workers in Iran.

See also: Report on the Second Latin American Meeting of Worker-Recovered Factories: "Our solidarity is permanent"