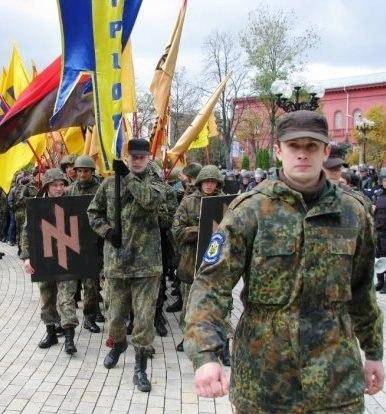 The last few weeks have seen a wave of political killings in Ukraine. All the deaths have been of high profile figures associated with opposition to the current Kiev government. The two most recent killings, one of a former Party of Regions MP and the other of a journalist and author, coincided with the victims’ details being published on a website called The Peacekeeper shortly before their deaths.

This website, which has the support of Anton Geraschenko, a top advisor to Ukraine’s interior minister who encouraged his Facebook followers to send in information about “suspected terrorists and separatists” to the site, claims to be a database with information on “pro-Russian terrorists, separatists, mercenaries, war criminals, and murderers”.

Within hours of each other on 16 and 17 April, Oleg Kalashnikov, a former MP with ties to Yanukovich, and Oles Buzyna, a journalist who had appeared on Russian talk shows recently, were murdered. According to political expert Volodomyr Fesenko, a group claiming to be the Ukrainian Insurgent Army sent him an email addressed to the Opposition Bloc, claiming responsibility for the murders. Fesenko quoted the letter as saying “We are unleashing a ruthless insurgency against the anti-Ukrainian regime of traitors and Moscow's lackeys. From now on, we will only speak to them using the language of weapons, all the way to their elimination.”

This claim by the neo-nazi Ukrainian Insurgent Army comes shortly after they have been legitimised by the Ukrainian parliament, in the same breath as banning all Communist symbols and propaganda and glorifying the nazi collaborators in WWII. Far right elements in Ukraine have also recently received a boost from the appointment of Dimitry Yarosh, leader of the fascist Right Sector, to Advisor to the Chief of the General Staff of the Armed Forces in Ukraine. President Poroshenko’s reliance on fascist elements to silence opposition to his regime is increasing.

The final interview given by Buzyna before his murder is revealing. In it he says “I support the idea that relations between Russia and the Ukraine should become most comfortable and friendly [because] the ‘real’ Ukraine is in large measure dependent on economic ties with Russia”. He goes on to say “There was a coup d’état. After that, it was legalized, they did everything, anything they wanted, to make it look decent...The fact that there was a coup is hugely the fault of Yanukovich, who failed to perform his duties as President”. He also describes the country as being “governed by thieves from within” and concludes by saying that the government is “shelling civilians in towns instead of fighting terrorists… That’s the thing. My position is inconvenient to the current authorities in Ukraine”. One week after criticising the government in this way, Buzyna was dead.

These two most recent murders have been preceded by a spate of so-called suicides, all involving opposition figures. On February 28, Mikhail Chechetov, a former MP for the Party of Regions, reportedly jumped from the window of his 17th-floor apartment in Kiev. On March 9, Stanislav Melnik, also a former member of parliament with the Party of Regions and the manager of several businesses in Donetsk, was found dead in his apartment near Kiev. And finally, on March 12, Oleksandr Peklushenko, another former MP, was found in his house in Zaporizhzhya, in southeastern Ukraine, dead of a gunshot wound.

The Kiev authorities have claimed that many of these deaths are suicides. Regarding Buzyna and Kalashnikov the government has suggested that this could be the work of Moscow attempting a provocation by killing off opposition figures. This seems far-fetched to say the least, as Buzyna said in his final interview: “When the country is governed by thieves from within, it is very easy to blame Putin. Whatever happens—Putin is to blame.” In the context of a consolidation of fascist positions in the government and in law, as well as the breathing space afforded by the fragile ceasefire agreement, it appears that Kiev is making the most of this opportunity to unleash its far right thugs against its opponents.

Meanwhile US troops have begun training soldiers of the Ukrainian National Guard, while the US state department has hypocritically claimed that Russia is violating the terms of the Minsk agreement by massing weapons in prohibited zones and carrying out training exercises with rebel forces. Although the ceasefire appears to be holding in the main, there has been fighting breaking out at certain flashpoints, particularly near the key port of Mariupol.

Poroshenko, under pressure from the far right Ukrainian nationalists, will not be able to reconcile fascist support for his government with a separatist state in the east of the country. This will put the ceasefire under more and more pressure the longer it continues, but Poroshenko recognises the potential for general discontent, caused by continued war in the east, to spread widely among ordinary western Ukrainians. Thus he is cementing his position by eliminating figures around which opposition to his regime could coalesce, thereby paving the way for a renewed assault on the eastern republics.