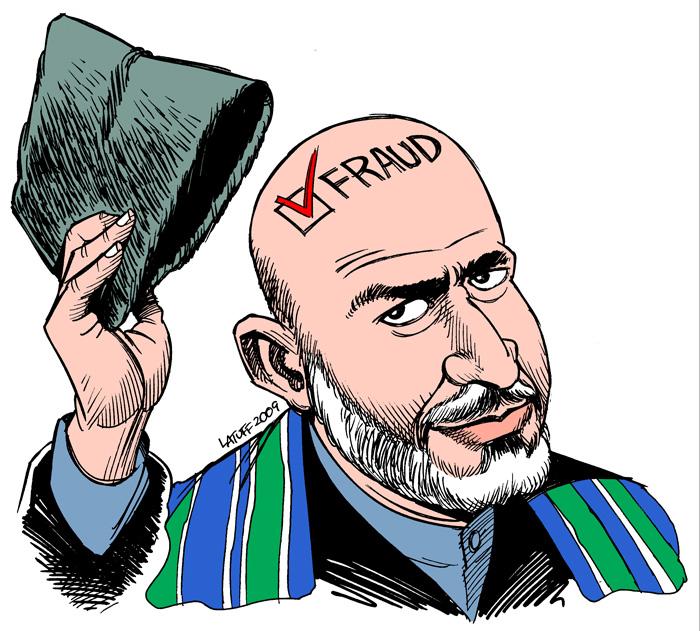 After eight years of war in Afghanistan, the inability of Western imperialism to quell the insurgency has entered into a period of crisis. Cracks and divisions within the central government are becoming more and more critical as the military and political situation becomes ever more unstable. Major conflicts within Afghanistan’s Western-backed ruling clique were first brought to a head in August during the presidential elections. The accusations of fraud have left Karzai’s grip on power extremely strained and have left Karzai wondering whether the NATO mission is more hindrance than help.

After eight years of war in Afghanistan, the inability of Western imperialism to quell the insurgency has entered into a period of crisis. Cracks and divisions within the central government are becoming more and more critical as the military and political situation becomes ever more unstable.

Major conflicts within Afghanistan’s Western-backed ruling clique were first brought to a head in August during the presidential elections. Massive fraud led to President Hamid Karzai’s closest challenger, former Foreign Minister Abdullah Abdullah, boycotting the run-off election, allowing Karzai to be installed into a disputed second term. However, the accusations of fraud have left Karzai’s grip on power extremely strained. Western imperialism’s failure to stabilize Afghanistan has been translated into a deep mistrust of Karzai and a desire to diffuse the power he wields as president (which is considerable). On the other side, Karzai has begun to view the NATO mission as more of a hindrance to his authority and continues to rely ever more heavily on his warlord base of support. As well, he is making increasing overtures toward Iran and the Taliban itself.

Since the invasion in 2001, we have said that the war in Afghanistan was an unwinnable one:

“Despite the public self-congratulations, the Americans are still blundering around in the dark, groping for a way out. But no way out presents itself. Yet again, we see how the Americans have thought nothing out to the end. They imagined that once they had pushed the Taliban out of Kabul, the problem would be solved. But this is not at all the case. The fall of Kabul has taken place in a manner not of the Americans' choosing and even less to their liking. They see that the Alliance leaders are already installing themselves in the capital, and, once this occurs, it will not be easy to dislodge them. Washington does not trust the Alliance. They fear that, now the common enemy is removed, the "united front" will break up into its constituent parts. This is very likely. The result will be chaos and civil war.” (Alan Woods, “Afghanistan After the Fall of Kabul: Is the War Over? ,” 15 Nov. 2001)

These perspectives have been completely validated by events and are now reaching critical mass. The fraudulent elections last August were the straw the broke the camel’s back for the “united” central government. At the time we wrote:

“Afghanistan is entering a period of acute crisis that could put the final nail in the coffin of the imperialist intervention there. Contradictions in the military and political situation have been building beneath the surface for years. The inability of NATO to defeat the Taliban is a direct reflection of the corruption, nepotism, and incompetence of the Karzai regime” (Julian Benson, “The Afghan Elections: Imperialist Adventure Continues to Weaken,” 3 Sep. 2009)

But what exactly are the “constituent parts,” and how are they reflected in the Afghan political situation and what role are they playing in events?

The Karzai regime has always relied on the various warlords and regional strongmen as its main base of support. Through a system of cronyism and appointments, Karzai has placed many of these allies in key positions in the provinces, ministries, and in Parliament. The West was all too happy to support these thugs as long as they, in turn, supported Western imperialism. However, as the war progresses and NATO’s victory appears less and less likely, many of these elements are moving towards conciliation with the Taliban (and subsequently, towards the Iranian sphere of influence) and away from the interests of Western imperialism. Karzai himself has directly reflected this. As one commentator with the British bourgeois paper The Telegraph put it:

“On both of my recent visits to Kabul, senior NATO officers have privately expressed their deepening concern about Mr Karzai's personal dealings with the Taliban—which, I'm told, now take place on an almost daily basis. For the head of a government that is committed to a process of political reconciliation, establishing a dialogue with the Taliban makes perfectly good sense. But Mr Karzai's refusal to discuss the precise nature of his contacts with the insurgents has led some Western officials to conclude that the Afghan president has an altogether different agenda: that of encouraging the Taliban to continue their attacks on NATO. That was certainly the view of one American general I met, who was convinced that Mr Karzai was backing the Taliban.” (Con Coughlin, “Hamid Karzai is making some pretty unpleasant friends,” 2 Apr. 2010)

Karzai sees where the war is taking him and is desperate to avoid the consequences of being tied to NATO’s sinking ship. Having concluded that NATO will not be able to defeat the insurgency he is hoping to come to a compromise peace with the Taliban in order to, he believes, protect his own power. Not surprisingly, Washington is very displeased by this.

The Battle over the State

The rift between Karzai and the West, and between the various factions within the government itself, has been building under the surface for a long time, but the election fraud in August has acted as a catalyst to bring it more and more to the surface. The battle over the Elections Complaints Commission (ECC) has been at the centre of the controversy.

The ECC, which is currently made up of five members, three of which are appointed by the UN, is the body that oversees Afghan elections. The ECC was responsible for disqualifying over one million votes during last year’s presidential elections that forced Karzai into an embarrassing run-off election. Karzai’s influence was further hurt when his opponent pulled out of the race citing fears of further fraud. Karzai is no democrat, but neither are the imperialists. The West was quite happy having warlords running the country so long as they did what they were told, but now that Karzai’s clique is viewed as less than reliable, the imperialists have suddenly become absolutely exacting in their review of Afghan democracy. This was a direct challenge to Karzai’s power.

In February, during the Afghan parliament’s winter recess, Karzai responded by unilaterally decreeing that he had the authority to reappoint all five members of the ECC with his own choices, and to the exclusion of foreigners. This enraged the imperialist camp.

The Obama administration reacted by cancelling a planned trip by Karzai to Washington, which seems to be intended to publicly embarrass the Afghan president. In reply, Karzai hastily arranged a state visit for Iranian president Ahmadinejad to visit Kabul. Karzai’s response is telling of which direction he is moving politically. The Seattle Times describes the situation like this:

“Last month, Karzai had been expected to visit the White House, but U.S. officials told The New York Times he was disinvited over his stance on the election panel. Incensed, Karzai extended an invitation of his own — to Mahmoud Ahmadinejad, the Iranian president, who flew to Kabul and delivered a fiery anti-American speech inside Afghanistan's presidential palace.” (Seattle Times, “U.S. Turns up heat and Karzai smolders,” 5 Apr. 2010)

In addition to reaching out to the Taliban, Karzai has also been making increasing overtures towards the Iranian regime. Karzai has had two official meetings with the Iranian dictator in the last month, both of which were far more publicized than Obama’s recent trip to Kabul (which was so secretive, Karzai didn’t find out about it until an hour before the US president landed). Karzai knows that he cannot survive without international backing, and is attempting to balance between rival powers to secure his position.

This combined with a deteriorating security situation, has given the West an increasing sense that things are nearing a breaking point. The Western imperialists recently mobilized their diplomatic corps to whip up the Opposition in Afghanistan’s parliament. They even suggested a change to the constitution so as to add the position of “Prime Minister” in order to diffuse the president’s power. It is amazing how active the imperialists are in changing Afghan law when it is a question of their own power in the country. Where was this concern for fair and democratic government when their then-loyal puppet Karzai was passing laws that legalized the rape of women?

On the 31st of March, the lower house of the Afghan parliament overwhelmingly passed a resolution that rejected Karzai’s decree on the take-over of the ECC, saying that he did not have the authority to do so. The next day Karzai, at a public address, lashed out at the West saying, “There was fraud in presidential and provincial council elections—no doubt that there was a very widespread fraud, very widespread. But Afghans did not do this fraud. The foreigners did this fraud.”

He went on to say that such actions by foreigners, interfering in domestic affairs, have the risk of NATO being seen as “invaders,” and the insurgency becoming “a national resistance.”

Though he downplayed his remarks in the face of outrage amongst Western governments, he did not retract them. Two days later, the Afghanistan upper house (1/3 of which is appointed by Karzai) vetoed the lower house’s resolution, thus restoring the president’s authority to reappoint the ECC, which will be overseeing the all important parliamentary elections later this year.

The Karzai regime did not just suddenly become tyrannical and corrupt; it has been like this since it was put into power by Western bayonets in 2001. However, it is only recently that the imperialist camp started to whip up opposition to the regime due to these factors. This is not just a coincidence. There is a real possibility that Karzai, and many in his clique, have lost faith in NATO’s ability to win this war and are drifting closer and closer towards the Taliban. This is a direct reflection of the bloody quagmire that Afghanistan has become for Western forces. The failure to progress militarily is, as we have said on many occasions, a direct reflection of the inability of capitalism to progress Afghanistan politically and economically.

Imperialism and the Taliban are two sides of the same coin. One is the military imposition of finance capital; the other is its twisted and reactionary offspring. Karzai is caught in the middle, trying to balance between the two sides. The tight rope he is walking may well turn into his noose. The fact is that all the fracturing and conflict between these various groups are representative of the inability of capitalism to provide anyway forward for regular Afghans other than endless war and grinding poverty.

Only the unity of the Afghan people with their comrades in Pakistan, Iran, and the Arab states into a Socialist Federation of the Middle East and Asia can provide a way forward. Only the pooling of resources and labour, under a democratic plan of production, can give the Afghan people employment, infrastructure, literacy, medical treatment, and other necessities so that they can, once and for all, end their country’s tragic history of foreign oppression and build a new, free and socialist Afghanistan.