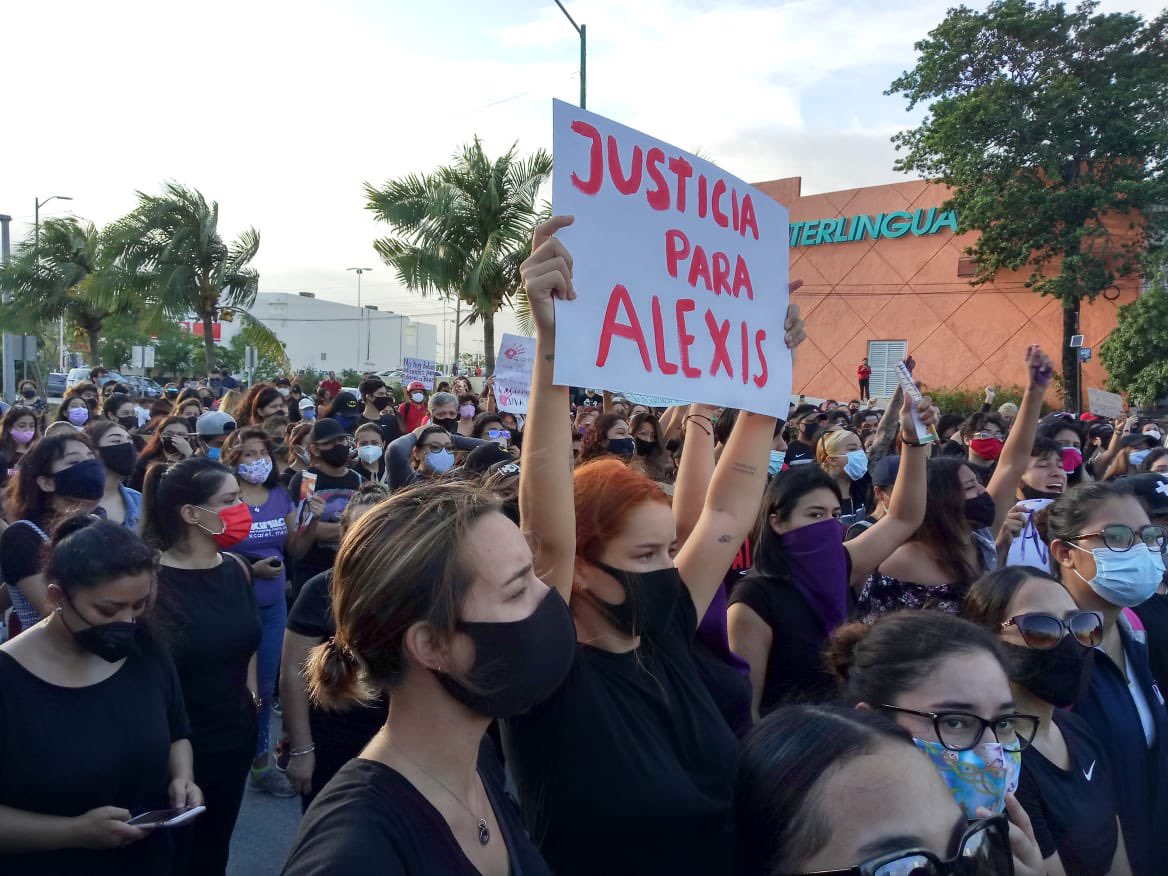 In the evening of Friday 7 November, 20-year-old Bianca Alejandrina, known to friends as Alexis, did not return home after she had gone out to sell electronic cigarettes in the suburbs of Cancún, in Quintana Roo, southeast Mexico. On Sunday, her dead body was found. She had been quartered. Her remains had been put in plastic bags. Thousands of youths took to their streets of Cancún and other cities to protest against this brutal murder.

Alexis was a young woman full of life, joy, and ingenuity. She loved to sing, dance, and design tattoos. Alexis was a close friend of comrades from the Mexican section of the International Marxist Tendency, La Izquierda Socialista, in Cancún. She was committed to the liberation of women and to the struggle for a better world. Only a few months ago, she posted this indictment of sexist violence:

“Where does the fragility of a woman’s body begin and where does it end in the society we live in? What drives someone to think they can divest us of our bodies and our souls with the indifference with which one grabs a pebble from the ground? Is that what we are? Lifeless objects, bereft of the will to feel, think, or dream? Do you think you are entitled to deny us our dreams just so you can make some money or have pleasure? Do we deserve to end in a dumpster or a ditch? Are our lives worth a couple of dollars? Do we amount to a pile of dead meat? Explain to me then, why is it that we are kidnapped, abused, raped, killed and bereaved of our souls for the sake of your self-importance, lust, and thirst for power? No one will deny me the right to stare at the sky every morning, no one will stop my skin from being caressed lovingly and with consent, no one will steal my dreams, or make me sigh other than in joy and pleasure. I’d rather die than let you wretches murder me.” 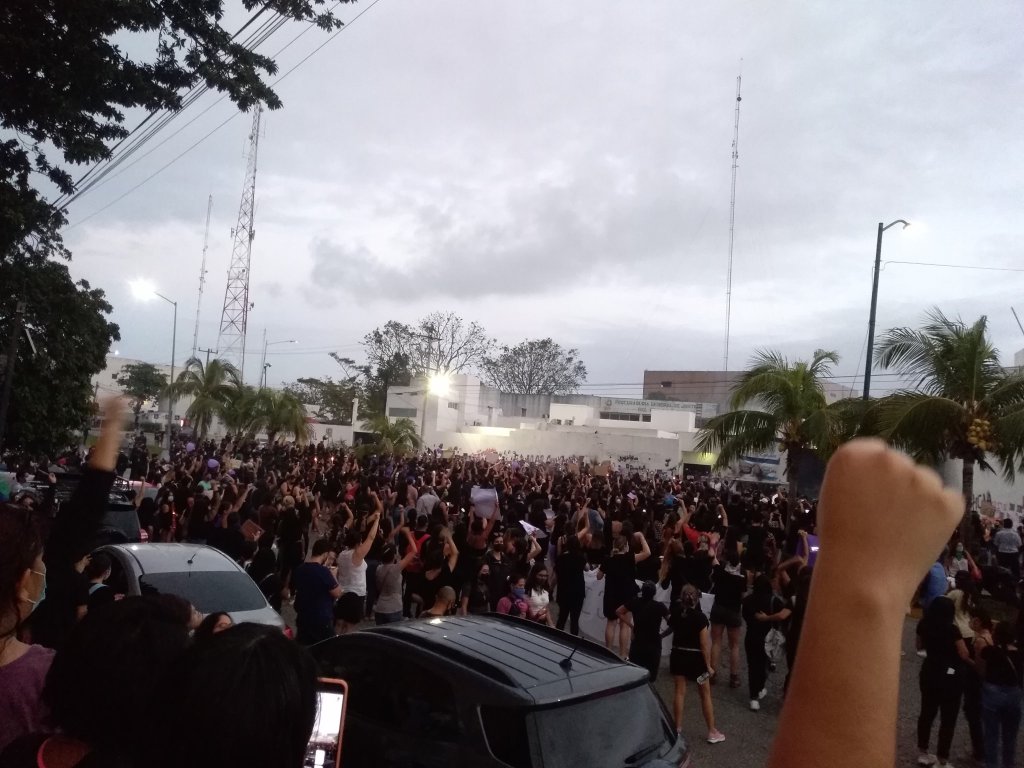 The heinous murder of Alexis is one among countless such crimes perpetrated every day against women in Mexico. Some of these murders are connected to organised crime, others to domestic violence. In most cases (as many as 97 percent), owing to the authorities’ inaction, the culprits are not found. As of yet, we do not know who murdered Alexis. On average, 10 women are murdered every day in the country. This trend has worsened in recent years. Femicides have increased by 145 percent in six years. The pandemic and the lockdown have aggravated the problem as women are often trapped at home with their aggressors. Femicides are the most brutal expression of the daily abuse, harassment and humiliation Mexican women face.

This blight does not fall from the skies. It stems from the decomposition of Mexican capitalist society. The crooked, parasitic Mexican bourgeoisie is tied hand and foot to the rapacious whims of US imperialism and is incapable of developing the country’s productive forces. For the sake of its profits, it condemns millions of workers, peasants, and urban poor to lives of misery, precariousness, and nerve-wracking insecurity. The youth is denied its dreams and teeters on the brink of lumpenisation and demoralisation. Organised crime festers under these conditions and complements the “legal” earnings of Mexican capitalism through drug, weapons, and human trafficking; blackmail, and abductions. The Mexican state apparatus is called to defend this rotten state of affairs. Its moral calibre reflects the nature of its social function. It is corrupt to the bone and in the payroll of the capitalists and the drug lords. The Washington-sponsored “war on drugs” launched by president Felipe Calderón in 2006 did little to curb drug trafficking, but intensified violence by deploying the army throughout the country. The state cannot protect working-class women. At best, it is apathetic and impotent in the face of femicides. At worst, it is in cahoots with the murderers, especially when they are connected to the drug cartels.

This is a breeding ground for violence of all sorts – above all sexist violence. Abuses are widespread across society, but working-class and peasant women bear the brunt of the atrocities. Alexis herself was a precarious street vendor, forced into the informal economy by the crisis. This is a dangerous endeavour as peddlers often have to walk or use public transport to cover long distances day and night.

The youth fights back

Already on Friday, brigades of volunteers, friends, and family set out to find Alexis. Reactionaries and male chauvinists attempted to slander her on social media and blame her own behaviour for her disappearance. A powerful countercampaign was launched. When news of her gruesome murder was disclosed, protests were called throughout the region of Quintana Roo. A rally was also called in the capital by the IMT and other left-wing, women’s and workers’ organisations. Mexico has seen large marches against sexist violence in recent years. The 8 March demonstration in Mexico City gathered crowds of 80,000. Although the pandemic subdued these protests, in recent weeks there were attempts to kick-start new mobilisations. In September, feminists occupied the National Commission for Human Rights in the capital. In October, there were large protests in the small town of Huajuapan, in the southern region of Oaxaca, against the spike in abductions of women. The murder of Alexis unleashed all the pent-up anger that had been building.

Thousands of people took to the streets of Cancún on Monday. After the official march came to an end, groups of youths headed to the regional prosecutors’ offices and set fire to the entrance. The local and state police responded with brutal repression, firing their weapons with live ammunition to disperse the crowds. Several people were beaten and arrested. A journalist was injured by police gunfire. This scandalous attack reveals the nature of the bourgeois state. It is indifferent and lethargic when it comes to combatting sexist violence. But it cracks down in full force against the youth when it comes out to fight for its rights and its safety. Police followed orders from the regional government, headed by traditional bourgeois parties PAN and PRD. These reactionary parties are pitted against the left-wing government of López Obrador and attempt to compromise and destabilise it through violence and intimidation from their regional power bases. In June, similar scenes took place in Jalisco, where local, right-wing authorities meted out brutal repression against the protests that followed the murder by police of worker Giovanni López.

However, we cannot let López Obrador and his party, Morena, off the hook. The mayor of Cancún, Mara Lezama, belongs to Morena. She protested against the repression but did nothing to stop it. Some local officials have been discharged, but there is much to be done. Such is largely the attitude of the national government too. It laments femicides and police brutality, but in practice, it does little of substance to tackle these problems. They also fudge the demand for the legalisation of abortion, which remains inaccessible in most of the country. The government’s barrage of protocols and codes of ethics fall flat before the brutality of life in Mexico. Indeed, there is little López Obrador can do insofar as he accepts the capitalist system and bourgeois legality. The hike in femicides in recent years is a consequence of the decomposition of Mexican capitalism, aggravated by the so-called “war on drugs”, which, in turn, is bound up with imperialist domination. Still, López Obrador believes he can marshal the state apparatus for progressive ends. Yet the state is not neutral – it is an instrument for the defence of privilege and injustice. Bridled by the straightjacket of private property and the bourgeois state, López Obrador is incapable of resolving this problem. He rubs salt into the wound through his empty promises and demagoguery. If Morena truly wants to combat sexist violence, it must employ revolutionary methods.

The lack of revolutionary leadership and the impotence of the official left around Morena fuels ultra-leftist attitudes. Groups of ultra-lefts and provocateurs were active among the crowds in Cancún. They were also present in the aforementioned occupation of the National Commission of Human Rights, where radical, separatist feminists took control of the movement. Their sectarian and authoritarian methods helped dissipate much of the sympathy the occupation initially awakened. Yet this is only part of the equation.

Young people rightly abhor the murder of their sisters. The situation has become unbearable. They will not be satisfied with peaceful, routine marches. Their rage must find an outlet. It is understandable and, indeed, positive, that they seek to vent their anger against the state and its rotten institutions. Rioting is looked upon with sympathy, or at least with passive tolerance, by growing numbers of people. We share the rage and celebrate the radical fighting mood. The problem, however, is that unorganised outbursts of violence by groups of radicalised youths, confined to this or that region, run the risk of pushing other social sectors away and narrowing the movement’s base of support. Thus, the fighting vanguard of the youth may end up isolated and crushed by the state. They must arm themselves with a plan of struggle and a socialist programme, and actively seek to draw the broad masses of the people into the fray. Above all, they must appeal to the organised working class to throw its formidable weight behind the movement. The weapons for such a task are mass, democratic assemblies and brigades for agitation in neighbourhoods and workplaces. Democratic assemblies must be coordinated nationally through committees of struggle. They must protect themselves by organising self-defence units accountable to the assemblies. Thus, spontaneous and desperate acts of violent protest will turn into the mass revolutionary action of the working people. The unforgiving fury of women, the youth, the workers, the peasants, will fall like a sledgehammer on the heads of the oppressors. The sexist murderers and abusers will pay dearly for their crimes. So will their political, institutional and intellectual accomplices. The revenge of our class, ultimately, will be carried out through the overthrow of their rotten system.