Jura Soyfer, a political activist, cabaret artist, journalist and author in Vienna in the 1930s, would have turned 100 years of age on 8th December this year. In his poems, articles, and plays, Soyfer spoke up for a better world and encouraged the working class to remember its strength and to stand up against fascism and National Socialism. 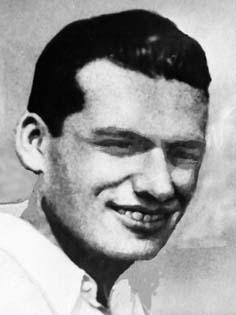 Jura SoyferThe time that Soyfer lived through has been described as a period of immense political and social instability, which had an influence on the whole of the 20th century, and Soyfer shared in the struggles, hopes, and illusions of a generation that grew up without optimism during economic crisis, mass unemployment and the looming danger of war.

Jura Soyfer was born on 8th December 1912 in Kharkov (Ukraine). His father was a Jewish industrialist and in the course of the Russian Revolution his family fled to Vienna in 1923.

From 1930 onwards, Soyfer regularly published poems and articles in the "Arbeiter-Zeitung", the central organ of the Austrian social democrats established by Victor Adler in 1889.

The political situation in Austria worsened on a daily basis. To understand the further developments it is necessary to get a clear picture of the events and circumstances in detail.

1931 saw the bankruptcy of the Austrian bank Credit-Anstalt; the economic crisis reached Austria and the Social Democrats refused to form a coalition government with the "Christlichsoziale" (a major conservative political party in the crown lands of Austria-Hungary and in the First Republic of Austria, from 1891 to 1934; a predecessor of the contemporary Austrian People's Party) and instead remained in opposition.

The changes in the law and domestic policy, the sharpening of class antagonism, and the conflicts in national and international politics led Jura Soyfer to believe without doubt that the crisis of capitalism was going to result in a world war. In numerous publications he warned of the danger of a world war and fascism and called for active resistance.

Jura yearned to see for himself what was actually happening in Germany and he agreed to go there for a few weeks as a correspondent with the editor in chief of the "Arbeiter-Zeitung". In 1932 he got to see the last summer of the Weimarer Republik (established in 1919 in Germany to replace the imperial form of government), gaining a "close-up" of National Socialism in the process, and he was astonished by Hitler's brutality. In particular, Soyfer criticised the inability of the party leadership of the left parties in Germany and was astonished to see that the revolutionary working class - with its willingness to fight - had no party to fight for its demands.

Soyfer’s coverage of that journey, as well as his articles and poems from the years 1931-1934, show continuous attempts to arouse the Austrian working class; to make them aware of the danger of Fascism and National Socialism.

The events in Germany from 1933 (i.e. the coming to power of Hitler and the inactivity of the workers’ movement due to the silence from working class leadership) cast a dangerous shadow on Austria. There were reports of concentration camps for opponents of the regime. All this resulted in growing uncertainty for SDAP (Sozialdemokratische Arbeiterpartei; Social Democratic party of Austria), which were not able to agree on the correct way of reacting and instead decided to just keep an eye on the events.

At the same time, the conflict between the Social Democratic Party and the "Christlichsozialen" escalated. From January 1932 until February 1934, the number of armed clashes between National Socialists and Austromarxists increased. With the inactivity of the parliament - the main stage for political agitation of the SDAP - the rise of an authoritarian regime, with Dollfuß at the top, became possible on 4th March 1933 and further attacks on the already-weakened workers’ movements occured. In May 1933, the "Republikanische Schutzbund" (Republican Protection League; a paramilitary organization established in 1923 by the Austrian Social Democratic party to secure power in the face of rising political radicalization after World War I) was dissolved. The worst blow for the workers party was the Civil War in February 1934, also known as the February Uprising, which took place between 12 February and 16 February 1934, and which saw the defeat of the socialist forces.

Jura Soyfer tried with great effort to capture the events of the 1930s in his novel "So starb eine Partei". Here he criticised his party in a way that would not be possible in the "Arbeiter-Zeitung", analyzing the failure of the social democrats. The work is a detailed study of the party's politics, its organizational structure, and its functionality and ideology; it is considered one of the best works that describe the conflicts of this time.

Soyfer criticised the estrangement of the party from rank and file party members, the bureaucratisation of the party leadership, and the danger of confrontation with fascist tendencies. The novel is partly lost, like a third of his work, and what is left is a fragment that gives a good insight into the dynamics of the political situation at that time.

After the events of 1934 Soyfer turned away from the SDAP. In the Communist Party, which was illegal since 1933, Soyfer worked for the Press Department as a contact man for foreign journalists. During these activities, he met the English writer and journalist John Lehmann, who published some of Soyfer’s texts in the London literary magazine “New Writing”. These publications are an important source for reconstructing Soyfer’s complete work.

Jura Soyfer continued his work in various left oriented newspapers in Vienna and made his debut in 1935 at the political cabaret “ABC Theatre”. As one of three members of the Communist Party, Jura Soyfer had differences with the director of “ABC Theatre”, but since his plays were a huge box office success they let him work freely, and he became the main writer of the most critical, most revolutionary cabaret in Vienna.

In 1936, his first centerpiece “Der Weltuntergang” (“The End of the World”) received its premiere. 1936-37 saw the debut performance of “Der Lechner Edi schaut ins Paradies” (“Journey to Paradise”) and, in the magazine "Literatur am Naschmarkt", "Astoria" was published. “Der treueste Bürger Bagdads” (“The most loyal citizen of Baghdad”), “Vineta” and “Broadway- Melodie” followed in the season of 1937-38.

“The indictment was based on Soyfers connections to known Communists, the seized documents and his activities in the cabaret.” It is also stated that his Communist attitude clearly emerged from the plays he wrote.

After a three-month prison sentence, Soyfer was released from custody on 17th February 1938 as part of a general amnesty for all “political prisoners”.

It was particularly bad for him that the novel, which he had worked on for years, had been seized in the raids by the police. Contrary to the advice of his friends he had not made a complete copy of the manuscript.

After his release from prison, he was faced with a difficult personal decision to either give up his job (as an intellectual journalist and political author) or to emigrate. Given the foreseeable future, there was no alternative to emigration for him since he was already known to the police as a resistance fighter, a rebellious cabaret author, a Jew and a communist.

On 13th March 1938, Jura Soyfer and Hugo Ebner were arrested when trying to cross the Austrian border into Switzerland and were transported to Feldkirch (Vorarlberg).

Jura Soyfer was extremely eager to get to know a new world, and he wanted to know exactly what a concentration camp looked like in order to authentically describe it later. He says: “The Nazis want to crush everything human within us.” If this journalist and writer had survived, his work on the concentration camps would have been an important contribution to the pathology of barbarism. In September 1938 he was transferred to Buchenwald.

All contemporary witnesses agree on one thing: Jura Soyfer lost neither his courage nor his irony; he always retained his warmth and cheered up his demoralised comrades.

After the “November progroms”, the camp was overcrowded and there was an outbreak of typhoid. Soyfer and Hoffenberg were forced to do the “Revierdienst”, wrapping dead bodies in blankets and taking them into a shed outside of the camp gate, so that the bodies could be transported for incineration.

The sanitary conditions in the camp were disastrous and Jura Soyfer also contracted typhoif. It is a twist of fate that on the day of his admission to the infirmary he also received his discharge papers and a visa to enter the United States. The comrades did everything they could to help him, but a later case of pneumonia turned out to be his death sentence. On 16th February 1939, Soyfer died. It is our duty to ensure that his death wasn’t for nothing; it is our duty to keep his legacy alive.