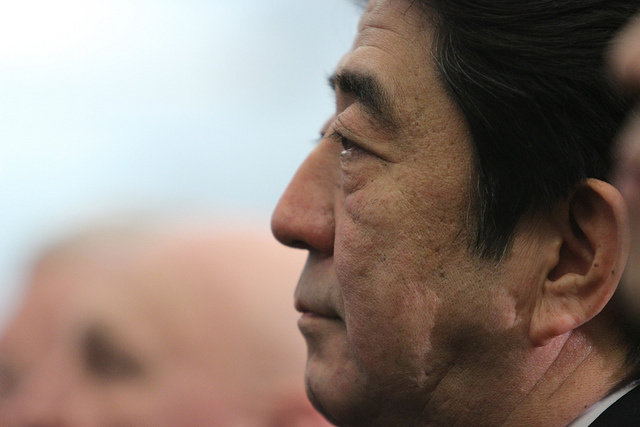 While the mainstream media remains silent about the recent political developments in Tokyo, the more serious press, which serves as a bulletin for the capitalist class internationally, describes a real political earthquake taking place in Japan.

On Monday, September 25th the Prime Minister, Mr. Shinzo Abe announced at a press conference that he would be calling a snap election during the extraordinary Diet session on Thursday. Mr. Abe, while doubling as the leader of his Liberal Democratic Party, had been pressured by the main opposition parties, the Democratic Party and the Japanese Communist Party to call the extraordinary session amid scandals concerning his open favouritism and nepotism.

The official announcement yesterday of a snap election for October 22nd and the dissolution of the Lower House and the belligerent speech  that Mr. Abe delivered to LDP members seem to indicate that he is trying to turn the tables and strengthen his position by playing the nationalist card on the back of growing tensions between North Korea and Japan.

In February of this year, the fortunes of this man who was considered to be the strongest player in Japanese politics started to crumble before everyone's eyes. The national media reported that none other than Mrs. Akie Abe, the PM’s wife, not only had some shady connections with the Moritomo Gakuen private nursery, but had also been its honorary principal.

Now, why is this link to Moritomo Gakuen so important? To understand why it became such a huge scandal, one needs to look into the background of that private nursery. Moritomo Gakuen is a private education institution, which promotes reactionary nationalism, reminiscent of the pre-war militarist period. Little children, aged 3 to 5, are taught to bow in front of imperial portraits, sing the national anthem every morning and go for field trips to the military bases. They are even forced to memorise the pre-war educational oath of allegiance, banned by the US occupation for its promotion of absolute loyalty to the emperor.

The official director of the Moritomo Gakuen was Mr. Yasunori Kagoike. That gentleman is also the leader of the Osaka branch of Nippon Kaigi - a reactionary, right-wing organisation that actively infiltrates Japanese politics and has quite a few members in Mr. Abe’s cabinet. Nippon Kaigi has some extremely reactionary views, including a firm belief that Imperial Japan had “liberated” East Asian countries from colonialism during WWII. The Prime Minister is also a member of the group.

Mr. Kagoike, to build his school of ultra-reactionary indoctrination, had bought a 8,770 sq metre plot of land from the government for a mere 134m yen - 14% of the official value, as reported by the Japanese Finance Ministry. As the scandal unfolded, local officials became keener to talk, and soon Abe’s personal involvement in Moritomo Gakuen became clear to all.

In the end, it was Mr. Kagoike himself that confirmed all the behind the scenes corruption. Under oath and in front of a parliamentary committee, he not only agreed that there was political influence behind the “discount” on the land, but he also disclosed that he had received an envelope from Mrs. Abe, containing 1m yen with a message “Please, that’s from Shinzo Abe”.

As every day passed, the popularity of the PM waned. At the end of July, quietly and swiftly, Mr. Kagoike was arrested along with his wife. That did not help much, as yet another scandal concerning Abe’s cronyism had emerged.

A former vice-minister of the Ministry of Education had disclosed in a press conference, that there was active pressure on the officials to approve the project of a veterinary school, proposed by a good friend of Mr. Abe, Kotaro Kake. This scandal, while relatively smaller than the previous one, had been revealed when the previous one was still fresh in the memory of the public. It was obvious now that Mr. Abe had been lying, is lying and will be lying in the future. And while there is nothing new in all this when it comes to bourgeois politicians, they usually do a better job of hiding it. The media nicknamed the PM “a dead man walking”.

The opposition parties had been calling for an extraordinary session of the diet for months, with Abe’s popularity in shatters, hoping to undermine him even more and oust him from power. The ruling bloc of Abe’s LDP and the Komeito party ignored these demands, even though they have been lawfully obliged to hold the session according to Article 53 of the Japanese constitution which says:

“The Cabinet may determine to convoke extraordinary sessions of the Diet. When a quarter or more of the total members of either House makes the demand, the Cabinet must determine on such convocation.”

Of course, as we know, bourgeois law is only applied as long as it serves the interests of the capitalists. This is why the LDP agreed to hold the extraordinary session now, with the main opposition party, the Democratic Party, on the verge of a split and with Abe’s popularity resurging, following the North Korean rocket incidents.

However, the long awaited session was cut short after announcing the decision to dissolve the Lower House and hold snap elections on October 22nd. Abe’s bid to hold onto power was clearly emboldened by the divisions in the main opposition party and by the North Korean threat.

The LDP’s pet policy is the change of Article 9 of the Constitution which was enforced by the US occupation after the war:

“Aspiring sincerely to an international peace based on justice and order, the Japanese people forever renounce war as a sovereign right of the nation and the threat or use of force as means of settling international disputes.

“In order to accomplish the aim of the preceding paragraph, land, sea, and air forces, as well as other war potential, will never be maintained. The right of belligerency of the state will not be recognized.”

Perhaps not surprisingly, Nippon Kaigi is one of the fiercest opponents of Article 9, and wishes to reinstate full-fledged military power, as a “counter-balance” to other powers in the region. Having said that, Japan does have its own “army”, only it is not called as such. Japan’s Self-Defence Force is one of the most modern and advanced military forces on the planet. Reactionaries, nostalgic of the past military might of Japan, however, want to make it even stronger, and restore their right to enforce Japanese imperialist interests by means of war.

North Korea’s desperate measures to whip up fears over their nuclear arsenal are playing into the hands of the right-wing establishment in Japan. Abe wants to strengthen his position, posing as a “strong leader” that the country needs in “dangerous times”. Constitutional change will probably be one of the main points of the election campaign. The public will be steered into discussions on national security, while the real problems of Japan will remain untouched.

A stagnating economy, growing inequality, enormous hidden homelessness, exploitation of cheap labour from other Asian countries and insecure part-time employment or unemployment, all of these very real issues will be consequently buried under tons of media reports on North Korean rockets and the “imminent danger” to “national security”.

Mr. Abe’s announcement has already provoked a dramatic change in the Japanese political landscape. Suddenly the whole simmering process of growing instability is being accelerated. Yuriko Koike, the Governor of Tokyo and Abe’s former political ally, had already challenged the LDP last year by winning the election to Governor in Tokyo. Over the past period she enjoyed rising personal popularity by distancing herself more and more from the premier.

Abe’s gamble pushed her to overcome her hesitations and launch a rival conservative party, denominated the Party of Hope. Ms. Koike is attacking Mr. Abe for his record on the economy, the management of the crisis with North Korea and in general his opaque dealings revealed by the recent scandals. By attacking the Premier, Ms. Koike is also trying to tap into the rising discontent towards the vested interests of the establishment embodied in the Premier.

Immediately after Ms. Koike’s new party was announced, the main opposition party’s Lower House representatives unanimously decided to disband the dwindling DP’s Lower House caucus and to apply individually for a ticket in the Party of Hope’s election list.

It is not clear yet how many of these former DP MPs Ms. Keiko, who has excluded standing herself and has just a few days to prepare her new party’s election campaign, will allow into the list. However, it is clear that while Mr. Abe’s victory in the October 22nd election is likely, his coalition may lose the two-thirds majority in the Lower House. His attempt to hold onto power could therefore backfire and make the whole situation more unstable.

The choice at the ballot box for Japanese workers and youth is going to be more or less fictitious, between two variations of right-wing conservative bourgeois parties. Whether it will be the LDP or (extremely unlikely) the Party of Hope to win the election it will make no major difference in terms of the social and economic policies they will implement.

It is important to note that the main opposition force based on the workers’ movement, the Japanese Communist Party, has so far been unable to take advantage of the crisis of the bourgeois political system and grow significantly on the back of the rising discontent.

Nevertheless, the significance of the October 22nd election and of the present instability is making the crisis of Japanese capitalism more and more visible for millions of Japanese workers and youth, despite the smokescreen raised by Abe in order not to deal with the real problems facing the Japanese people.

A result above the expectations for Ms. Keiko’s new party could unleash a violent internal struggle within the LDP with unpredictable consequences.

The decades-long economic stagnation, the burden of extremely high National debt levels (over 250 percent of the GDP in 2016 - by far the highest in the advanced capitalist countries), the prospect of increasing general world instability and a new international economic downturn are eroding the stability of Japanese capitalism.

The present political crisis in Japan has the potential of escalating into a much deeper crisis of the entire bourgeois political system, a crisis of the regime which will shake the consciousness of millions of Japanese workers and youth with revolutionary consequences for the future.