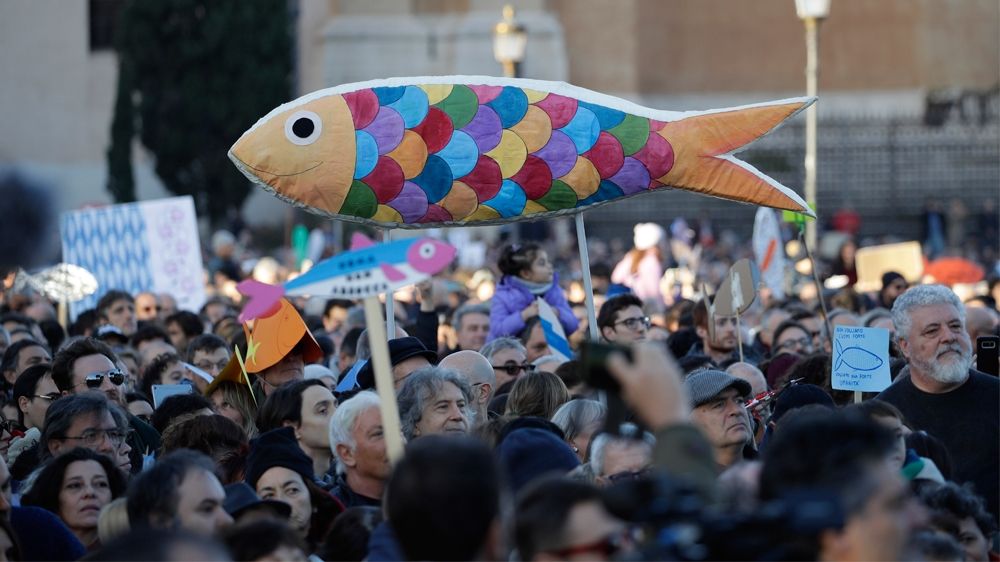 The "sardines" took to the squares of Emilia in big numbers, and in the wake of their success, became a national movement in a matter of days. The first mobilisation was triggered in the capital of Bologna on 14 November, due to the presence of Salvini, who is doing a rally tour of the region with an eye on the 26 January elections.

About 15,000 people showed up in Piazza Maggiore, responding to the call of the "sardines", while that same evening a procession made up of 2-3,000, mostly young people, was stopped by the riot police while trying to go to Paladozza, where the head of the League was speaking.

The successful demonstration in Bologna was quickly replicated in the other towns in Emilia, then extended to other squares, especially in the big cities: Palermo, Milan, Naples, Genoa, concluding with a demonstration on 14 December in Piazza San Giovanni, in Rome.

This movement does not define itself in class terms, it does not say whose interests it wants to defend, but it appeals to values, virtues and sentiments: anti-racism, solidarity, peace, etc.

The composition of protesters in the squares is therefore heterogeneous. The dominant part is formed by the electorate of the PD and its satellites. There are also sectors of young people who have come out because this movement was the simplest way to demonstrate against racism and the reactionary demagoguery of Salvini. Moreover, anti-fascist and anti-racist demonstrations have not been lacking in recent years, and it is no coincidence that some of the places with the biggest demonstrations (such as Genoa and Bologna) had already seen important and combative mobilisations. 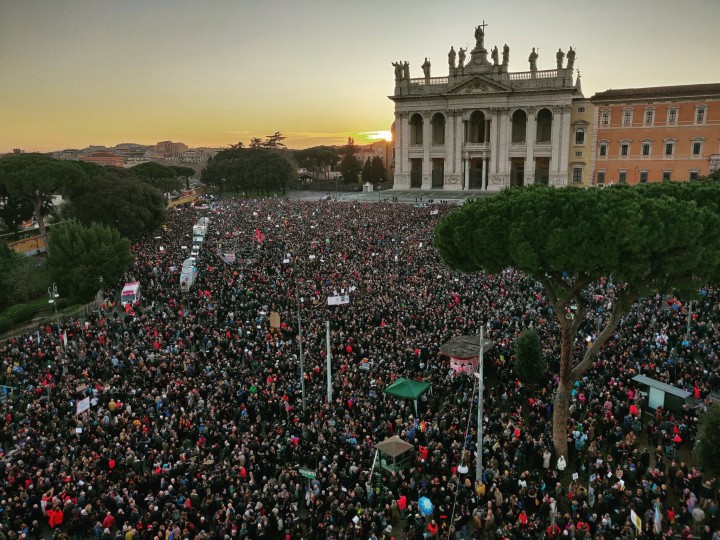 This is a large movement with a heterogenous composition, but the stultifying PD apparatus at its head. Its 'manifesto' is very confused, but lots of young people are taking part to protest Salvini's racism / Image: fair use

The heterogeneous composition of the movement is also demonstrated by the good reception that our activists received almost everywhere. The apolitical character insisted upon by the ringleaders of the movement does not therefore represent its entirety. A report from our comrades at the Parma event stated:

"Although the climate was imbued with this spirit of ‘anything but Salvini’, among the young people with whom we discussed we have not seen the slightest evidence of ostracism and hostility towards political symbols and materials, instead curiosity and willingness for political discussion.”

We have heard similar reports coming from the squares of Piacenza, Reggio Emilia and many others.

However, it would be wrong to see in this movement the expression of something new developing that is in search of definition. Rather, the ringleaders have set themselves the goal of recreating a "centre-left square", or a "piazza of the PD". The refusal to allow flags simply arises from the fact that their own flag has very little credibility.

The manifesto of the sardines: an empty void

The manifesto launched on the web with the signatures of "6,000 sardines" stands as a monument to absolute emptiness. The manifesto argues against unspecified "populists", who spread hatred and lies on the web (very true). And just to stand out from "populism" it defines itself as the voice of "normal people, of all ages: we love our homes and our families, we try to engage ourselves in our work, in volunteering, in sport, in leisure. We are passionate about helping others, when and how we can. We love fun things: beauty, non-violence (verbal and physical), creativity, listening."

The political naivety of the promoters, however, is very questionable. There would be nothing wrong with these sentiments, except for the political positions hiding behind this deafening rhetoric of "civil society".

Mattia Santori, for example, was in the past a supporter of the Renzi government's policy on energy and infrastructure. He published articles praising the notorious Sblocca Italia decree (a sweeping agenda of privatisation, deregulation and plunder of natural resources), criticising, if anything, insufficient decision-making over this policy; and was among the signatories of an appeal against the referendum on oil drilling (which failed due to lack of quorum).

The promoter of the movement in Florence, Bernard Dika, had been among the so-called millennials chosen by Renzi to be included in the leadership of the PD when he was the secretary. His enlightened television interventions are widely available online, in which he lashed out against quota 100, and weaved in praises of Minniti (whose tenure as Minister of the Interior under the PD was marked by a brutal anti-migrant policy), explaining that his immigration policy could stop the League if only it had been applied more decisively. Dika then stepped aside "to avoid exploitation", but he has changed very little.

Unsurprisingly, with this background in Turin, the sardines also include members of the "madamines", who led the Yes Tav demonstrations last year, which saw an unholy alliance in the streets between the PD, Forza Italia and the League.

The flanking of the PD

Some have compared the sardines to the movement of the "girotondi" of the early 2000s. But that movement, while drawing on the same rhetoric of "civil society", "rules" and "legality", at least had the merit of criticising head-on the leaders of the centre-left of that time. The tirade of Nanni Moretti against the "bureaucracy", while a petrified Piero Fassino stood on the stage behind him, gave voice to the anger of the "people of the left" against their leaders, who as a result of five years in government (under Prodi, D'Alema and Amato) delivered an electoral victory to Berlusconi on a silver platter.

Today, by contrast, the leaders of the sardines not only do not have a word of criticism for the Democratic Party, but instead call on people to support them in the elections, starting from the regional elections of Emilia Romagna on 26 January.

The manifesto in this regard is all too clear:

"We still believe in politics and politicians with a capital P. There are those who make mistakes, and those who think of their own personal interest after thinking of everyone else’s. Only a few remain, but they are there. And we will come back to give them courage, by saying thank you."

Who are these "politicians with a capital P"? Santori explains:

"We have said that we feel we are representatives of the centre-left here are made up of various souls: the civic, the PD, the progressive left. We are lucky, but we know that elsewhere in Italy things are different. Will I go to Piazza Maggiore on 7 December for the Bonaccini meeting? I personally will, as I imagine many young people who want to get an idea of and understand what is happening. But we have no dogmas or statutes. Everyone will do what they believe”.

A few days later, there was an announcement of an official meeting between the sardines and Bonaccini.

Even the secretary of the CGIL Landini expressed his support for the sardines for having reported "the democratic emergency". The commitment of the Democratic Party and the CGIL apparatus is evident and growing in the organisation of the mobilisations.

How do we fight against Salvini?

However, precisely because so many people took part in the demonstrations that certainly do not identify with this renewed passion for the Democratic Party, our criticism must not be limited to anecdotes. The question then is: how did the League gather support? And how can we really defeat it?

The promoters of the sardines blame social media and ignorance, which makes the dull populace fall into the trap of demagogy. We still hear sardines figurehead Mattia Santori declaring:

"I remember that, in Italy, the consensus in Italy is not synonymous with quality. After all, we are back from 20 years of Berlusconi. Everything depends on how you build consensus and on what basis. Salvini plays dirty and the Facebook question is huge: an uncontrolled social network and at the moment in the hands of a political force with only a single thought."

The refrain of the "20 years of Berlusconi" just makes us laugh. Even those who are (relatively) young, like Santori, can consult Google and discover that, from 1994 to 2018, the Democratic Party and its predecessors have ruled for about 15 years; the other forces to the left of the PD for 5; the League 11; and Forza Italy 12. 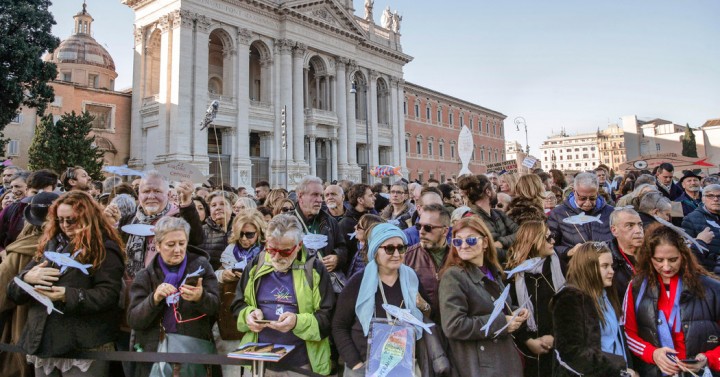 We will begin to really fight Salvini when the struggle in Italy is clarified into a class struggle / Image: fair use

The idea that the ignorant people voting for the League first became ignorant as a result of Berlusconi's TV stations, and then League social media strategist Morisi's misinformation campaigns, can only be believed by those who know nothing about what has happened in this country (or around the world) in these past decades.

The Jobs Act, the Fornero law, precarious work, privatisation, destruction of public assets, participation in imperialist wars, austerity, speculation and environmental devastation... the centre-left bears responsibility for these policies as much as the right, and in some cases even more. These policies have always been defended above by the need to remain in Europe.

As for the alleged "control" of Facebook by "a political force", we are beyond the realm of the ridiculous. Facebook, as it turns out, is not owned by Salvini, but a billionaire with well-known democratic leanings, who answers to the name of Mark Zuckerberg.

The question of what propaganda and communication control exists today in Italy, while the Fiat bosses have just bought the Gedi publishing group (covering Espresso, Repubblica, 13 local newspapers, various radios including Deejay, etc.) is an interesting theme, but certainly we will not see an end to the chatter of reactionary and racist "fake news".

The fight against racism and against Salvini will be won on the day that a clear class conflict breaks out in our country, sweeping away all artificial and superficial divisions (ethnic, religious, generational, etc.) by putting the class struggle, that of the exploited against the exploiters, at the forefront.

A word about "hate"

But in general, the rhetoric against "hatred" is a pillar of sardine propaganda and beyond. This should be demystified. Who hates whom? And why? Is all hatred equal?

We do not expect the sardine promoters to have a complete political programme, but at least to know where they stand when opposing interests clash in the real world. For example, in Bolivia, there was a bloody coup, and the attempt to resist this by the masses is still ongoing. Should we support this resistance, or perhaps because the deposed president Morales was a bit "populist", should we wash our hands of the whole thing?

And do the workers at Whirlpool or Ilva, the workers who lose their jobs at Auchan or Unicredit, not have the duty to fight with all their strength against the bosses who destroy their lives?

In Taranto (where the local environment has been blighted by Europe’s largest steel plant), to questions about the Ilva, Santori would have replied "it is not up to us to make proposals on environmental issues. We are too young and we are not a political movement." But not taking a stand means only endorsing what is already happening.

Let us borrow the words of a poet and comrade, who puts it better than us:

Or, the way it was sung a century ago: "peace among the oppressed, war against the oppressors!"