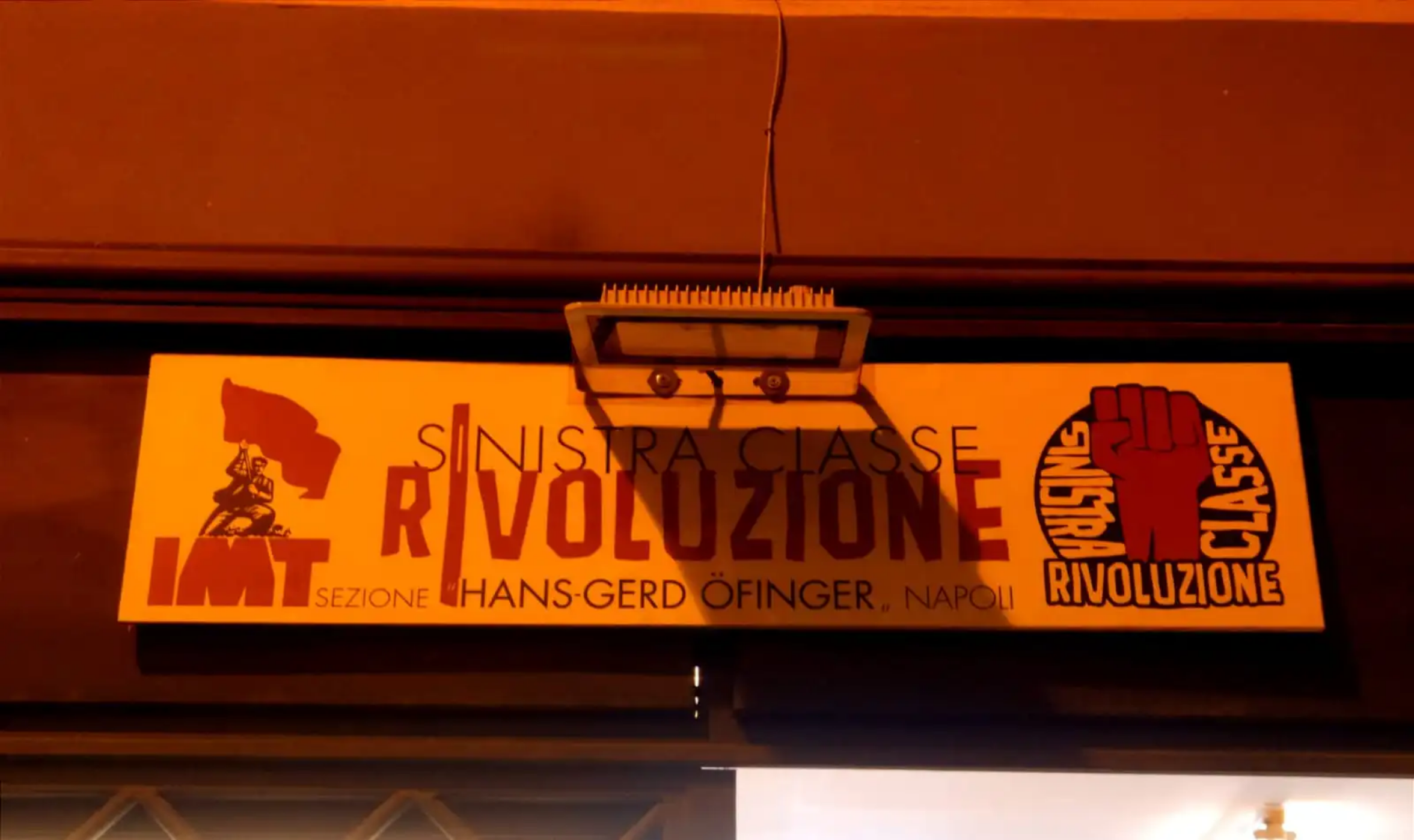 Turning off a little street in the heart of the historic centre of Naples, you will find a sign: Sinistra classe rivoluzione, sezione Hans – Gerd Öfinger (“Left-wing class and revolution, Hans-Gerd Öfinger branch”). On 6 October, a rainy afternoon that announced the beginning of autumn, the sign was unveiled to an audience of around 70 people. Gathered together, they bore witness to a new beginning.

Our office has been open for three years to anyone looking for revolutionary ideas and methods to orientate themselves in an increasingly chaotic and barbaric world. This is a space for those who are committed to transforming these ideas into a force capable of changing this world for the better. It is a place for those engaged in a conscious and tenacious fight for this goal.

Forced into our homes when the pandemic broke out in March 2020, and then jolted around in a baffling state of re-openings and additional lockdowns, we found ourselves in a newfound state of hardship, and faced with a serious challenge: keeping our office.

The pandemic did not stop our daily work for a single moment, which was moved online for some time. We knew we had to prepare to return to face-to-face activity, which would require more energy and determination than ever before. The first thing we said to ourselves was: “an exceptional moment requires commitment to doing an exceptional job”.

A testament to our efforts

An online fundraising drive allowed us to achieve results above our expectations. In just a few months, we collected over 4,000 euros from our comrades and supporters. This outcome is the fruit of the work done before and during the pandemic, based on rigorous discussion and a constant search for new recruits to the cause of Marxism.

With the funds raised, we decided to strengthen and improve the office. And so, the comrades became graphic designers, painters, masons, fitters. The result of this effort is a more beautiful and more welcoming space.

Yesterday we re-inaugurated our headquarters after three years. We presented the new space, first and foremost, to those who have directly contributed to making this happen, either financially or by taking part in the renovation work. But there were also new faces, young and very young people whom we met later. For them, the doors of our headquarters opened for the first time. They were joined by special guests.

The Naples section dedicated its offices to comrade Hans-Gerd Öfinger, founder of the German section of the International Marxist Tendency. Hans left us abruptly last March, after battling against the virus that has profoundly impacted the entire world.

Hans's wife and daughter, comrades in life and struggle, and a group of IMT members from the German and Austrian sections (which Hans also helped to build) wanted to be there to thank us, to remember Hans and wish the Neapolitan section all the best in its future endeavours. 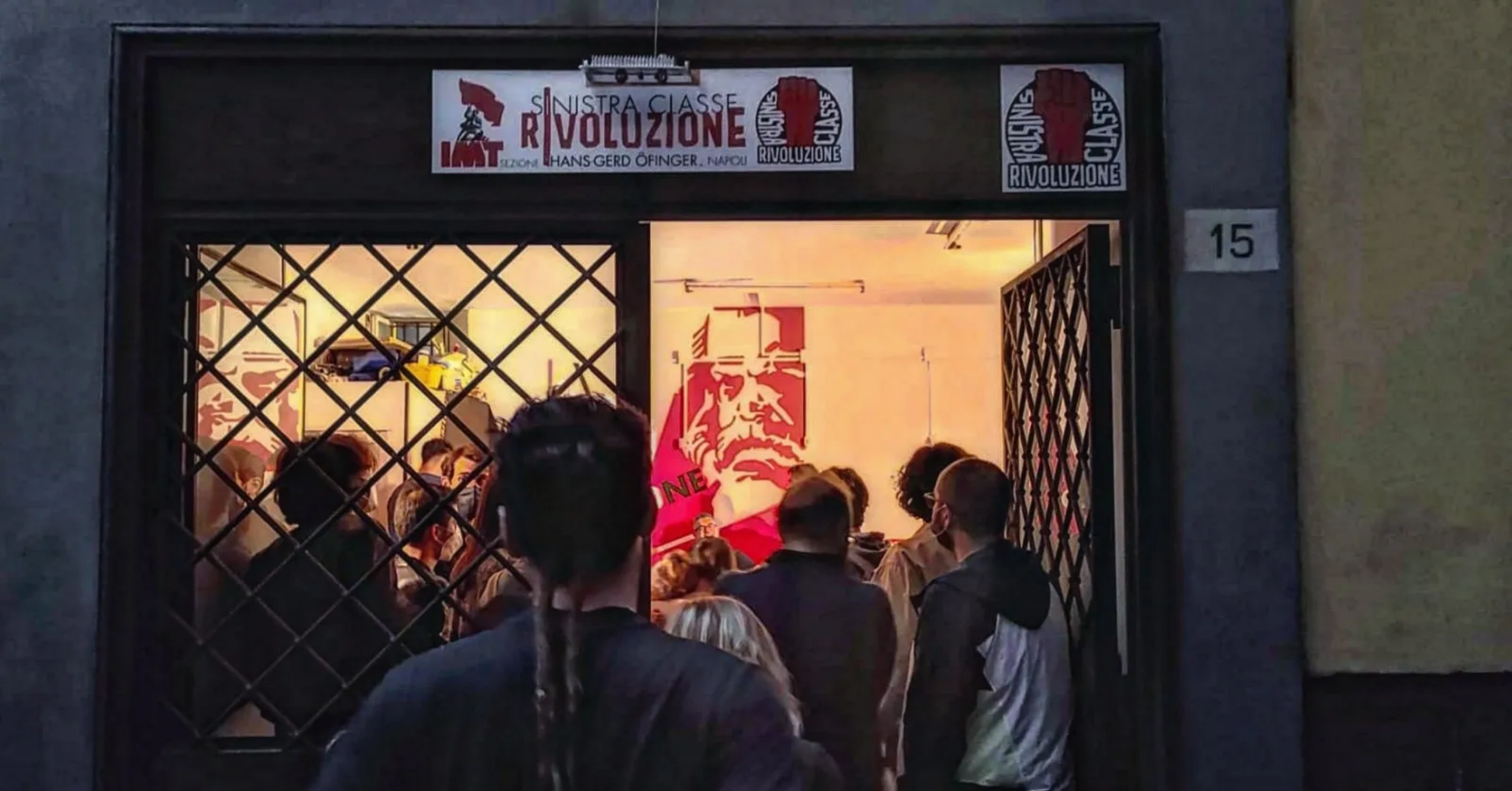 Hans's family has decided to make an important financial contribution both to the Neapolitan office and to the entire Italian section, which is committed to opening further offices throughout Italy.

In an epoch in which political offices are closing, Sinistra classe rivoluzione is moving against the stream, convinced that there is a need for spaces in which to discuss politics and organise our struggle.

Antonio Erpice, from the Naples section, provided a brief portrait of Hans. This contained only a few of the most essential features, which were sufficient to arouse the audience’s affection, and the will to carry on the fight.

Antonio spoke of a “comrade with unlimited curiosity for what was happening in other countries and for comrades from all sections”. A comrade who, at international meetings, helped us to understand the deeper processes taking place among the German workers and in their real conditions of life: shattering “the myth of Germany", which also plays a large part in political rhetoric on the southern side of the Alps.

He called on us to take as an example a comrade who fought in a difficult period, in which the forces of the left were diminishing or disappearing, and the revolutionary forces were left in pieces.

This was the period following the fall of the Berlin Wall, a challenge that did not cause Hans to step backwards, but saw him march straight ahead on his revolutionary path, surrounded by new comrades in the struggle, and guided by an untiring faith in the future.

Antonio concluded his speech with a wish that young people in Naples hear the name of Hans and bring him to life through their words and deeds, by spreading the ideas to which he dedicated himself. The name emblazoned above our headquarters has returned from a long journey, and will bring us new people willing to follow Hans’ example.

Hans's wife, Maria Clara, concurred with Antonio’s portrait, and offered additional memories of her own. She recalled Lenin's words that Hans liked to quote: “a good revolutionary must be a good listener”. Hans had enormous knowledge of the Italian and international labour movement, listened to each comrade with attention, and held them back after the meetings to question them about the conditions of the working class in their country. 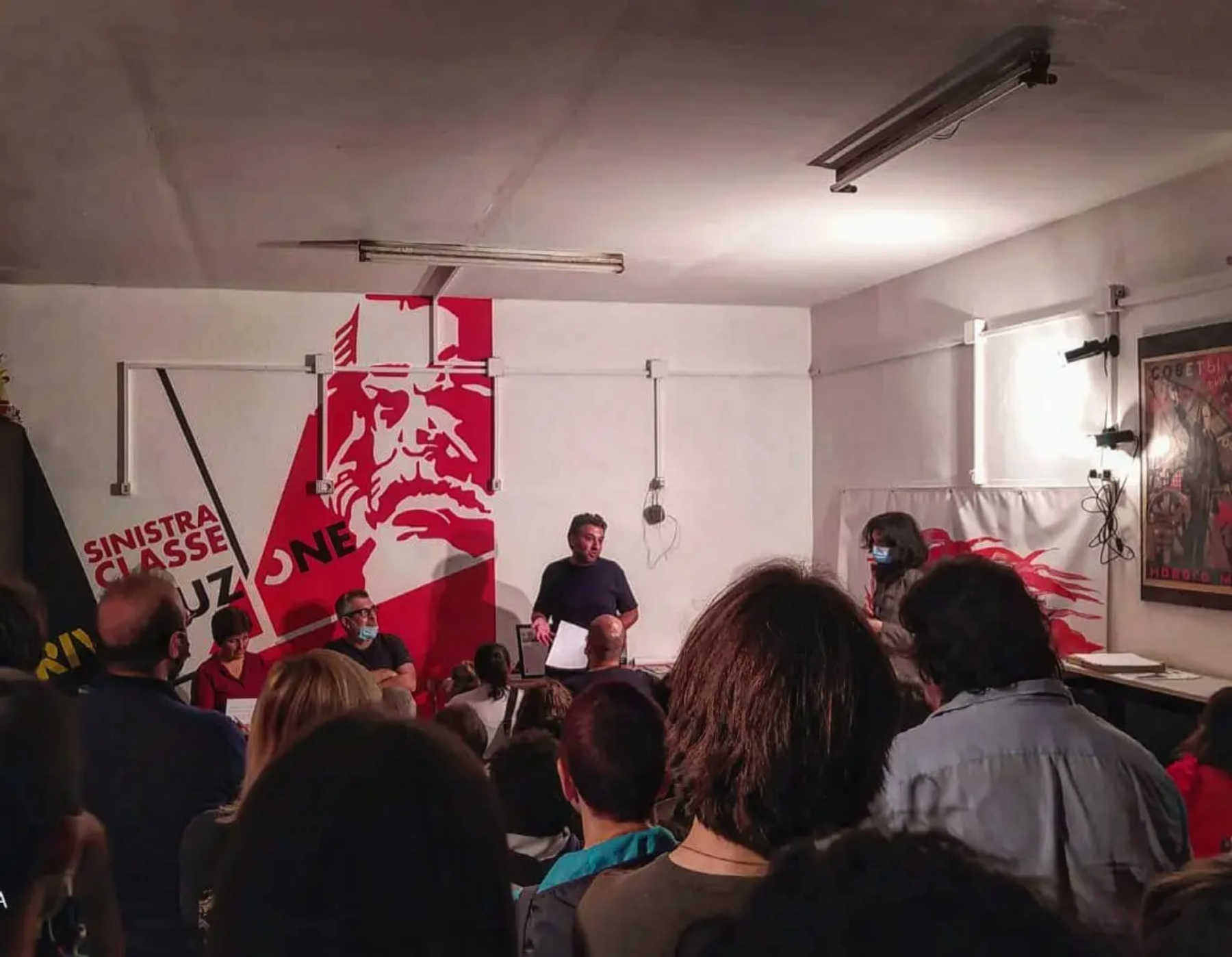 Hans was an optimist, attentive to everyone: a strong man who was able to find the balance between a life of struggle and a life of love, between political commitment and family.

Rosa, Hans's daughter, thanked the Neapolitan comrades and brought us the warm greetings of the German section, which Hans and Maria Clara and Rosa have both helped to strengthen and grow.

Alessandro Giardiello, from the National Executive of Sinistra classe rivoluzione, recalled the words of Ted Grant, the founder of the International Marxist Tendency, who said that “when certain ideas get into your blood they never abandon you", and that “a Marxist must always look at the world from the point of view of the working class”.

The two phrases became guiding principles in Hans's life, and we strive to make them our own, because they also describe every comrade who consciously dedicates their lives to the revolutionary struggle.

Alessandro recalled Hans's great loyalty to the international Marxist Tendency, but also his tenacity in defending a position, even going so far as to clash with top leaders, if convinced of his rightness. He added that every communist must know how to do this. 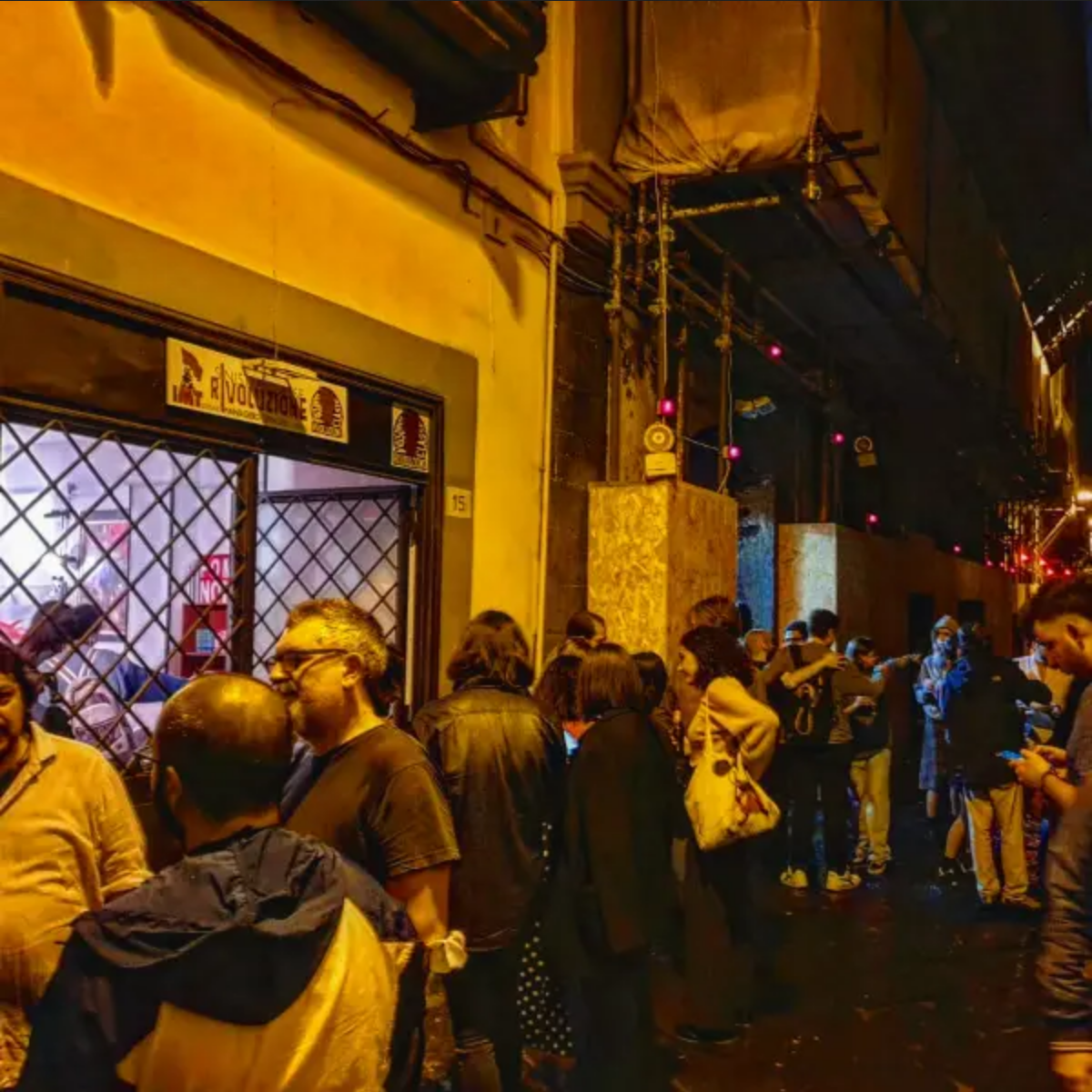 Hans’ life was dedicated to revolutionary politics, and set an example for all of us as members of the IMT.

He told us about Hans's attention to the Italian and Neapolitan sections. At every opportunity he sought a discussion with our fellow workers from the Fiat factory in Pomigliano, asking them about their working conditions, the climate among the workers and the perspectives for the work among them.

After the speeches, an excellent dinner helped to pass the rest of the evening. There was a lively atmosphere, warmed by the enthusiasm for the work still to be done. We distributed copies of our newspaper, Rivoluzione, pamphlets and magazines on the history of the labour movement and on other issues at the centre of the current political debate, addressed from a clearly Marxist point of view.

As we closed the office doors to go home for the evening, we came to think: “we definitely need a bigger space!” And Maria Clara's words rang in our ears: “Hans did not live long enough to see socialism, but we carry on his work. The struggle continues!”