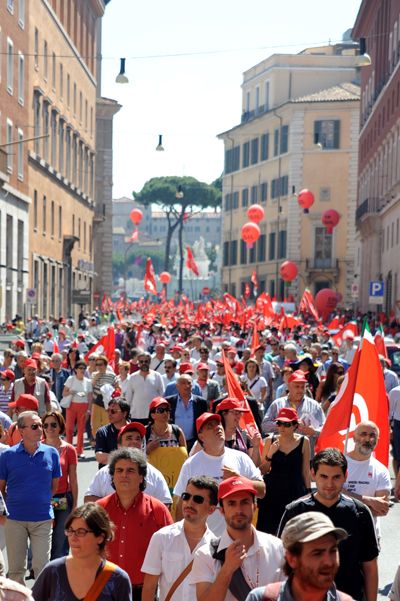 In response to Berlusconi’s severe public spending cuts the CGIL, Italy’s main trade union confederation called a 4-hour general strike last week. The response was massive with one million workers on the streets of Italy’s cities. A very militant mood could be felt on all the rallies with particular attention on the lead being given by the FIAT workers at the Pomigliano plant near Naples.

The deputy general secretary of the CGIL, Susanna Camusso, said that one million on the streets all over Italy was “Beyond expectations…” She went on to warn the government that people are beginning to realize that the latest austerity package offers no future for them. Workers on the demonstrations demanded that Prime Minister Silvio Berlusconi withdraw his proposals to freeze wages in the public-sector. Berlusconi is also introducing draconian cuts in local government funding, which the workers are opposed to.

Among the demands of the workers were also the following: stop sackings, defend jobs, for a system of benefits to defend workers losing jobs, measures to defend casual workers and immigrants. The strike was also in defence of article 18 of the Labour Statute, a law governing labour relations which is under attack from the Berlusconi government.

What has provoked such a huge reaction of the Italian working class is the €24 billion package of cuts recently announced by the Berlusconi government. This includes a 10% budget cut across government departments. This came as a shock to many, as for some time Berlusconi had been boasting that Italy was not in the same situation as Greece. Apparently Italy’s finances were in a “better shape”.

On the surface that would seem to be the case. Italy has not suffered a bursting of a housing bubble, like Spain. Its banking sector is more regulated, and thus it did not go through the same level of financial crisis as many other major capitalist economies. Italy's current budget deficit stands at 5.3 percent of GDP, low compared to Greece or even Britain. However, to base oneself on this would be superficial, to say the least. Italy’s national debt stands at more than 100 percent of GDP and is considered high risk, in fact one of the highest in Europe.

The fact is that Italian debt was already high long before the present international crisis erupted, and the bourgeois had been pushing for stringent cuts. Many serious bourgeois commentators were complaining that the Berlusconi was not doing enough to get debt down. Now reality has caught up with the government and it is being pressurized by Italian and international capital to move seriously on this front. Capital markets were not fooled by any of Berlusconi’s rhetoric and they placed Italy together with high-risk euro zone countries like Greece, Spain and Portugal. The result is the latest package of cuts. 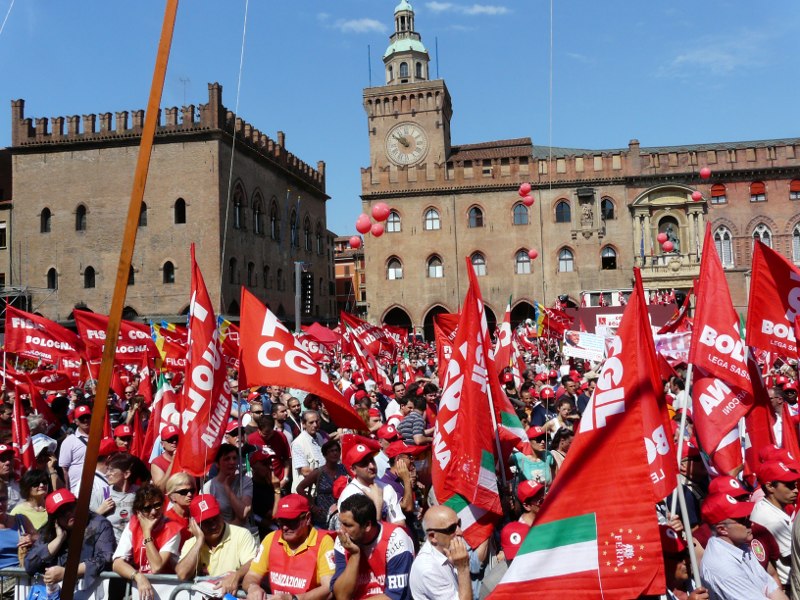 Demonstration in Bologna. Photo by CGIL. But Italian workers are not too keen on being made the scapegoat of the crisis that is not of their making. "We say no to this budget. It is wrong, unjust, it stunts growth, it does not kick-start production, it doesn't touch the rich, and it punishes workers," said Fulvio Mammoni, a member of the national secretariat of the CGIL, to the thousands of protesters gathered in Naples. Guglielmo Epifani, general secretary of the CGIL, said in his speech at the Padua rally, “The country is in shreds. The workers are suffering; unemployment is rising, especially in the industrialized areas. And the government does nothing.” These words reflect an even angrier mood among the rank and file members of the CGIL and the working class as a whole.

This is a sharp turn in the language of the CGIL leaders, who until recently were trying to stick to the policy of “dialogue”. This drift towards very moderate positions on the part of the CGIL leaders had led to conflict with the metalworkers’ section of the CGIL, the FIOM, which in recent times has been pushed more and more to the left. The fact that the CGIL leaders called Friday’s general strike on their own, without the backing of the other two main trade union federations, the CISL and UIL, is an indication of the pressure that is being brought to bear on the main trade union federation.

This has provoked an angry response from CISL general secretary, Raffaele Bonanni, who called on Epifani to “control his sick child, the FIOM, which is sucking him into a whirlpool.” The CISL and UIL leaders fear that the CGIL can begin to give expression to the real anger that has developed among the millions of Italian workers who are suffering the effects of the present crisis. They would like to maintain a cosy relationship with the government and the bosses, as no doubt the CGIL leaders would also like. But that is not possible, as the crisis of capitalism is polarising the situation.

This process began inside the FIOM, the CGIL metalworkers’ union. The leadership of the FIOM has been moving leftwards for some time, and this had brought it into conflict with the main CGIL leadership, so much so that at one point there was even talk that the two organisations might separate. The bosses were also pushing to isolate the FIOM. However, the fact remains that it is by far the most representative union in the metal industry. And now reality is beginning to impose itself.

A very militant mood has emerged at the FIAT plant in Pomigliano, near Naples in the south. In fact, during Friday’s demonstrations any reference to the Pomigliano FIAT workers was met with huge applause, and whenever sections of the FIOM went past they were met with huge cheering, an indication that the workers all over Italy are looking for examples of militant class struggle. There were hundreds, if not thousands of banners, in support of the Pomigliano workers on all the rallies. Workers were also wearing t-shirts supporting the campaign of solidarity with the Pomigliano FIAT workers. [We will provide a more detailed report from the Italian Marxists of Falcemartello on what is happening at Pomigliano in the coming days. It is already available in Italian.]

A national campaign has been launched in support of the Pomigliano FIAT workers, promoted by the PRC (Partito della Rifondazione Comunista, Communist Party) branch in the factory. The Marxists of the PRC and many local party federations are supporting and promoting the campaign, as are many Young Communists. The Pomigliano FIOM has organized for July 1st a national assembly of FIAT workers and shop stewards from the South of Italy, which promises to be a huge event. It is an indication of the growing will to organize and fight back on the part of the Italian working class. And once again this is being spearheaded by the metalworkers, historically the vanguard of the Italian working class.

While this is happening in Italy, in France last week we saw a huge strike movement against the government’s plans to cuts pensions and raise the retirement age from 60 to 62. Across the country 200 rallies were held and two million protesters took part.

Together with what we have already seen in Greece, Portugal, Spain, Denmark, Ireland and other countries, we see the beginning of a European-wide movement of the working class. Initially the deep recession had a dampening effect on strike activity. In fact, in many countries, after an already historically low level of strike activity, there was an even sharper fall in 2009. Now, however, millions of workers across Europe are beginning to realise that this is no temporary crisis that will go away soon. They only have one option and that is to fight back.