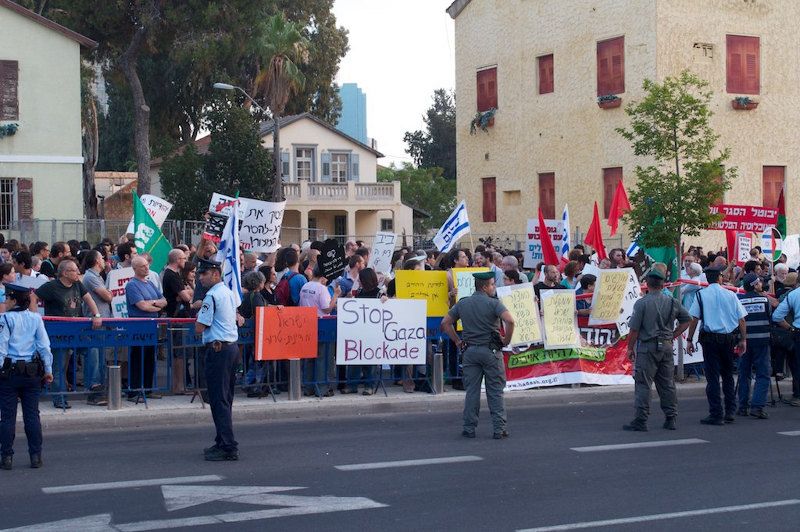 The barbaric Israeli Defence Force attack on the aid flotilla trying to break the embargo on Gaza is a clear indication of the growing crisis within Israeli society. The old ideology that held together Israeli society, Labour Zionism, has broken down, as capitalism in this small country can no longer guarantee the Jewish workers the basic social reforms of the past.

The Israeli ‘Defence’ Force’s recent barbaric attack on the civilian aid flotilla bound for Gaza has sparked angry protests around the world, and drawn sharp criticism even from Israel’s allies, like Turkey. There has been no meaningful diplomatic progress with the Arab world for more than a decade and a half, and successive Israeli governments pursue policies that threaten to plunge the region into war. Many Jews and Israelis hope that the latest horrors are simply the policies of a ‘bad government’ which can be replaced at the next election, but is it that simple?

The latest crisis began – as is now common knowledge when Israeli commandos boarded a civilian convoy bound for the impoverished Gaza strip, opened fire and killed several activists. Since Operation Cast Lead, Israel's barbaric assault on Gaza in 2008-9, the Israeli state has maintained a suffocating embargo on the territory, barring everything from certain foodstuffs to building materials. It was this blockade that the flotilla was trying to run, and Israel's response (boarding the ships in international waters) amounted to an act of piracy. 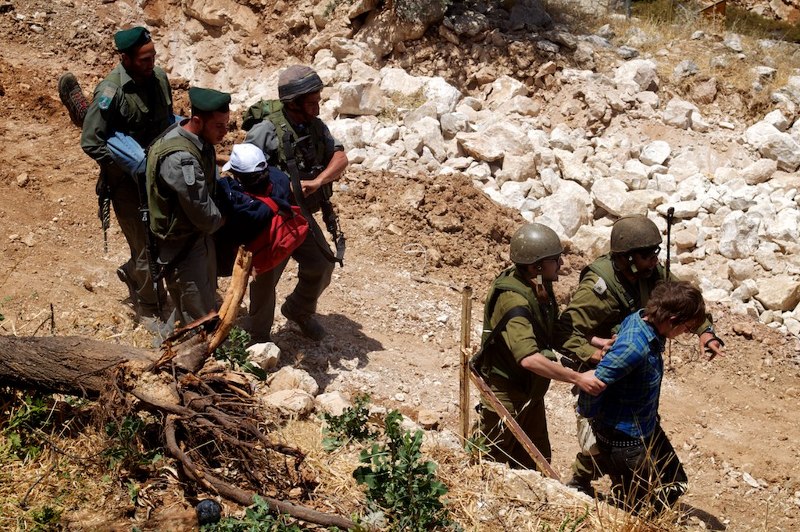 Protests against wall building met with military force. Photo by photos from zion. The people of Gaza suffer terribly, subject to the Israeli embargo. They are governed by a repressive Hamas regime known for throwing its political opponents off the tops of buildings. By firing rockets at Israeli civilians in poor working-class towns like Sderot, Hamas gave the Israeli state the excuse it needed to further repress the Palestinians. Originally financed by Israel to destabilise and divide the Palestinian resistance, Hamas offers no way out for the Palestinian people.

Labour Zionism and the founding of Israel

The roots of this present crisis lie in contradictions that have been building up within Israeli society for decades. As the State of Israel was being founded in 1948, the dominant political force amongst the Jewish settlers in Palestine was ‘Labour Zionism’, a cross-class alliance between Jewish businesses, cooperatives and the nascent labour movement. In the name of ‘state-building’, the Histadrut (Israeli trade union federation) had an important role in securing jobs for Jewish settlers at the expense of the Arabs who were either living in Palestine at the time, or who were attracted by the economic growth brought by the new Jewish enterprises. This alliance between unions and businesses was really what defined the early State of Israel, whose largest employers were the state and the Histadrut itself. This alliance was bound to break down.

Labour Zionism was supposed to provide full employment and a decent standard of living for Jews. However, it was riven with contradictions from the start and was bound to break down. On the one hand, state-building required discriminating against Arabs in the sphere of employment in favour of Jews. On the other hand, Arab workers and peasants were used to a much lower standard of living than European and American Jewish immigrants, which by the logic of capitalism made them more attractive employees. Part of the solution was to encourage Mizrahim (Jews of Middle-Eastern origin) to immigrate to the country – their living standards were lower still than those of the Arabs, meaning they provided ideal Jewish cheap labour.

The Labour Zionist model ‘worked’ to an extent against the backdrop of the post-war economic boom, but was thrown into crisis by the slump in the 1970s, with runaway inflation reaching over 400%. In 1977, the Israeli Labour Party, which had ruled uninterruptedly since 1948, was voted out of power and replaced by the Likud, who promoted a more traditional capitalist programme. In the 1980s, a savage programme of cuts and privatisations dismantled the state sector and buried Labour Zionism for good. Mass casualisation of labour weakened the Histadrut and wrecked living standards for working-class Israeli Jews.

The cross-class alliance on which the Zionist project was based has fallen apart. Modern-day Israel implements the same neoliberal economic policies as the rest of the capitalist world, forcing Jewish workers and pensioners below the poverty line. The Labour Party has collapsed with the ideology of Labour Zionism, existing now as a handful of MKs (Israeli MPs), who prop-up whatever right-wing administration is in power. Israeli society is disintegrating, unable to provide an acceptable standard of living even for Jews.

Since the 1950s, Israel has been seen as a strategic asset by US imperialism, particularly during the Cold War. Israel was involved in two costly wars with its neighbours, in 1967 and 1973. The threat of a ‘united front’ by the Arab world against Israel persuaded the Israeli ruling class to pursue a policy of seeking diplomatic engagement with certain Muslim countries which exploited divisions within the Arab/Muslim world. Israel’s good relations with Turkey and Iran before the revolution in 1979, and the peace treaties with Egypt and Jordan, were the results of a policy that sought to secure a divided Arab/Muslim world incapable of mounting another united war against Israel. However, this policy is now dead, not as a result of 'one bad government', but because of the deep-rooted crisis within Israeli society itself. 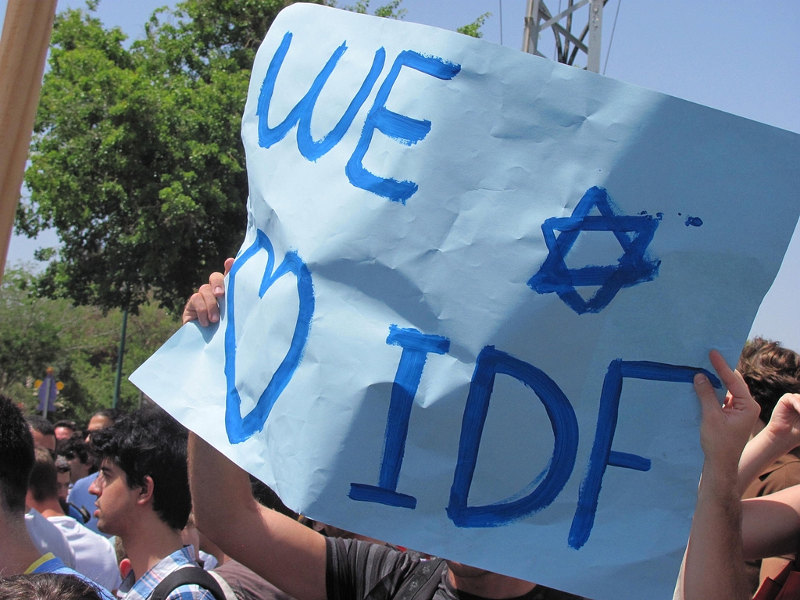 Right-wing supporters of the IDF, protesting in Tel Aviv. Photo by Lilachd. The basis of Israel as a ’national’ home for the Jewish people is further undermined by an economic system that creates mass Jewish unemployment whilst using east-Asian migrant workers as cheap labour. (These migrants are treated abominably, subject to appalling conditions such as deportation.) This challenges the reason for the existence of Israel – what is the purpose of yet another neoliberal state which impoverishes its citizens?

Since the mid 1990s, Israel has stumbled from one crisis to another. Israel’s actions with regards to the flotilla cannot be written off as incompetence or stupidity – they are a deliberate provocation, to an ally, no less (Turkey). Operation Cast Lead, Israel’s violent incursion into Gaza, and the 2006 invasion of Southern Lebanon must also be seen in this context. The state and government have lost legitimacy in the eyes of Israeli workers. Electoral turnout has collapsed, corruption scandals engulfing several prime-ministers, and a sex-scandal involving a former president, have further damaged the prestige of the state.

This is all a serious problem for a state whose economy is based on handouts from the US and Jewish charities based in the Jewish Diaspora. Israel’s increasing militarism is beginning to threaten the interests of US imperialism, and for how long will wealthy European and American Jews continue to throw money at a state which is in no meaningful way a ‘refuge for the Jews’?

The concept of a national home for the Jewish people, based on the cross-class ideology of Labour Zionism, was always completely utopian. As history has shown, such an entity cannot exist within the context of world capitalism. The collapse of Labour Zionism and its political party, Labour, has left a vacuum on the left. Israeli workers now have no political representation, even in the distorted form of Labour Zionism.

This process has had an effect on Israeli workers. In 2006, the Israeli Communist Party (ICP) did remarkably well in the Tel Aviv mayoral and municipal elections, coming second in both. Despite its limitations (as a completely reformist party), it nonetheless poses the question of Israel becoming a ‘state for all its citizens’, rather than a ‘Jewish state’.

The ICP lead a campaign to defend working-class neighbourhoods in Tel Aviv, which were threatened with demolition to make way for luxury skyscrapers. What is desperately needed is a movement that links rampant Israeli capitalism with permanent war and the national oppression of the Palestinian people as common threats to the whole working class. The Zionist project has become a nightmare for Israeli workers, delivering poverty and war. Their true allies are the downtrodden Palestinian masses.

In the end, the only way out is a united struggle of the Palestinian and Israeli workers and poor, for national rights, jobs, pensions, and a good standard of living for all. Allied with the masses of Egypt, Iran and all oppressed peoples, the Israeli and Palestinian masses will play their part in the struggle against imperialism in the Middle East, which is the struggle for socialism.