Details
Dekel Avshalom in Israel
28 May 2008

Israel & Palestine
Share
Tweet
Israel has recently renewed "peace" talks with Syria. The problem is that on the crucial question of the return of the Golan Heights to Syria, Israel cannot afford to grant this demand and Asad cannot sign an agreement without such a concession. That explains the lack of enthusiasm of the Israeli masses.

Israel has recently renewed "peace" talks with Syria. The problem is that on the crucial question of the return of the Golan Heights to Syria, Israel cannot afford to grant this demand and Asad cannot sign an agreement without such a concession. That explains the lack of enthusiasm of the Israeli masses. 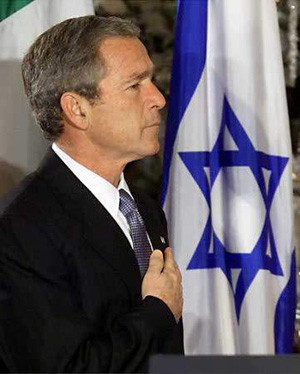 At any other time, the events that gripped Israel over the past month should have been viewed by Israeli people with great importance: just this month US president George W. Bush made a (second) historical visit to Israel. During that visit, he made unprecedented statements of support for Israel, unheard of by an American president. Usually, American presidents try somewhat to conceal their support for the Zionist regime in order to mitigate Arab resentment toward the US. But not this time: in one of his speeches Bush went as far as saying that the Israeli population is not just 7-million strong, but 307-million strong, implying that the Israeli nation and the American nation are one and the same. Another historical event has been the renewing of Israel's peace talks with Syria. These talks came to a standstill about 10 years ago during the Barak administration.

These two events were widely covered by the Israeli media, but received a very lukewarm attention from the public. For example, only a handful in Israel gave any attention to the extravagant proclamations of everlasting friendship uttered by George W. Bush. They all know that this president, isolated and hated in his own country, about to reach the end of one of the most shameful (if not the most shameful) terms of a US president, does not really represent anything regarding the future of US-Israel relations. His words are empty and his visit is meaningless to any Israeli, except the unfortunate ones who got stuck for hours in traffic because of all the roads closed by Israeli police during the visit.

As for the renewing of the "peace" talks, it appears to most Israelis as a curious coincidence that the talks were made public only a few days after yet another major corruption scandal had been revealed involving Israeli Prime Minister Ehud Olmert. The media had no choice but to stop covering the Olmert corruption case, and to start dealing with the renewal of the peace talks. Olmert himself announced that "now is not the time for interrogations" - using the "peace" talks as a pretext to create public pressure on the police and legal adviser.

Olmert seems to believe that what helped his predecessor and mentor Ariel Sharon to maintain power despite heavy corruption allegations, may also help him: when Sharon introduced the "disengagement" plan to withdraw Israel's military and civilian presence in the Gaza strip, it partly eased the media pressure and even may have caused the legal adviser to eventually close the case. It is known that the Israeli media and judiciary system are supportive of territorial compromise with the Arabs. It is against their interests to disrupt the constituency of a Prime Minister that is moving in that direction.

Can the "peace" talks achieve anything?

Syria's demands for peace are minimal: that Israel should return the Golan Heights which it occupied during the 1967 war. However, in the current conditions, no Israeli government could ever return the Golan to Syria. The Israelis are reluctant to trust any Arab leadership enough to give away these territories. No government could assemble a coalition wide enough to support such a move. The Syrian government, on the other hand, could not remain stable for long if it signed a peace agreement with hated Israel without even getting back what it lost in the 1967 war. This contradiction is what lies behind the inability of the two sides to sign a peace agreement. In the recent year, Israel has tried to solve this contradiction in the only way it knows - by force.

In the past year, the Israeli army has carried out two major infiltrations across Syria's borders. The first was to assassinate Imad Mughniyah, the Hezbollah chief of staff on Syrian soil. The second infiltration was several months ago, when Israeli planes bombed an isolated building in Syria, claiming it was a "nuclear facility". Israel recently published extremely dubious pictures which allegedly "prove" that this building was indeed a nuclear facility. Although this "evidence" - pictures of nuclear devices that could have been taken anywhere - raised more questions than answers, they were immediately acknowledged by the American government as proving that the Syrians were actually constructing a nuclear facility. Although the true intentions and thoughts of Israel's ruling class are not clear to us, it is safe to conclude that this aggressive behaviour and belligerent announcements were intended to provoke Syria into war with Israel, the thinking being that after Syria loses such a war, it would be possible to drag it to the negotiation table at its weakest moment.

To the bitter disappointment of the Israeli ruling class and army bureaucracy, despite their predictions, Syria has not retaliated yet to Israel's aggression. But Olmert could not play the waiting game any longer. With mounting corruption charges, a weakening coalition and being the most unpopular Prime Minister in Israel's history, the time had come to make a move.

The Syrians were happy to respond. They know full well that the road to Washington goes through Israel. Syria is eager to remove itself from the list of the "axis of evil" states, and start enjoying the economic benefits that come with complying with imperialist demands. 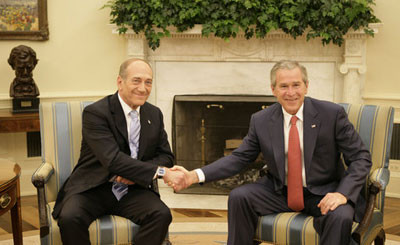 However, the people longing for peace shouldn't raise their hopes up to high. The peace talks are just a media spin of the Olmert entourage. They could not achieve anything because the contradiction between the two countries remains: Olmert cannot return the Golan Heights to Syria, and Asad cannot sign any peace agreement without that condition being met. Israel also cannot force Syria into signing such an agreement. Syria still has all of its trump cards: its army is intact and fully armed with missiles, and the connections with Hezbollah and Iran, which Syria uses to pressure Israel into peace talks, are not yet broken.

What lies in the future for both countries is anything but peace. This is why the news of the peace talks was received in Israel with such apathy. It is much more reasonable to assume that Israel will find a way to start a new regional war in an attempt to weaken Syria and force it to abandon its demand for the return of the territories stolen from it.

As for the Israeli masses, we can hardly blame them for being so pessimistic. Watching for decades the reactionary and bourgeois leaderships unable to resolve their conflicts, which escalated to the tragic consequences of the bourgeois "peace" agreement between Israel and the Palestinian leaderships, they have lost trust in the Arab leaders and in their own. Unfortunately, because there is no genuine mass workers' alternative, the Israeli right-wing elements are capitalizing on this tendency of despair and apathy and gaining politically from it. But this can only push the contradictions further. With the absence of truly proletarian and internationalist alternative, isolated from the workers' movement in the rest of the Middle East, the Israeli masses are forced to be content with bourgeois politics and its consequences: war, corruption, terror and exploitation.