As once more the never ending “peace” talks continue between the Palestinians, the US, and Israel, third generation Palestinians still keep the keys of long demolished Palestinian homes in what is now the State of Israel. From this is it not obvious that the Palestinians will never accept any agreement that will not include their right of return to the land of their forebears. 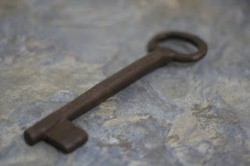 Whether Mahmoud Abbas in his suit knows this I don't know, but the people he represents do. Above the entrance of there villages is a key of the old type that those who have been in Israel for decades knew very well. That symbol is the true ambition of the Palestinian people, whether they be in the West Bank or the numerous refugee camps in Jordan, ruined Syria, or Lebanon.

The key is a very simple one, in fact so simple that when I first came to Israel in the 1970s most Israelis did not bother to lock their doors, because in the Labour-run Israel there was nothing to steal. Nearly everyone had the same.

This all changed when the right-wing capitalist Likud party, under the former terrorist Menachem Begin, came to power. Planeloads of US dollars were imported to the country, along with consumer goods, that those Israelis who were able to go abroad had seen, were now available to everyone, and the banks were very eager to lend money to the people to buy them. Now people were locking their doors.

However, as in all societies, not all were able to acquire these new shiny goods. So inevitably theft became a very serious problem. Not only were the keys inadequate, but the doors were flimsy and easy to smash open. So the “Pladelet”, meaning steel door, came on the market. The door when locked had bars that would lock into recesses in the door frame, much as in a safe. The key was computerized.

Inevitably in that period hyperinflation took hold; prices were marked in US dollars, wages reached into the millions of Shekels. Israel, like Thatcher in the UK, Reagan in the US, had been following the capitalist Guru Milton Friedman. Yes Israel had changed from a country where quite a highly developed form of welfare state had ruled, where most people had jobs and debt was not rampant, to just another carbon copy undisguised capitalist state, such as can be found all over our planet.

There was, however, one difference, one very important difference: Israel was (and to some extent still is) a country at war. It is still at war with the people it displaced 65 years ago in what it calls its “War of Independence”, and the Palestinians call the Nakba, “Day of the Catastrophe”. Those same Palestinians keep the old key and its story that is handed down to them from generation to generation, with the dream of returning to their homeland. The people of Israel also have their dream, the dream of living in peace.

These dreams will only ever reach their fulfilment when not only this part of the world, but the whole of the planet will realize that only under an equal system of coordinated planning, where all have a roof over their heads, enough food for their families, decent education, and work that is fulfilling the needs of all and using the abilities of all. Only under socialism can this be achieved. Then there will be no need for keys.