Israel & Palestine
Share
Tweet
Since Nir Barkat was elected mayor of Jerusalem last November, a sharp increase has been noted in the destruction of homes in East Jerusalem. He has ordered the destruction of 34 homes and plans to demolish 90 more. The international labour movement must condemn these barbaric acts.

Since Nir Barkat was elected to the mayor's office in Jerusalem last November, a sharp increase has been noted in the destruction of homes in East Jerusalem. During his short time in office, he has ordered the destruction of 34 homes. There are also plans to demolish 90 more houses in the Silwan neighborhood in order to build a public park in their place. 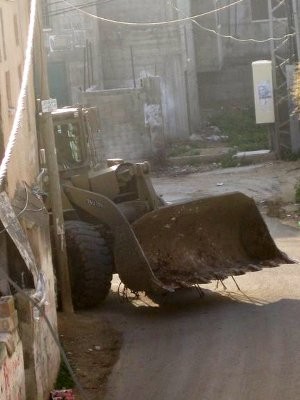 Demolition of homes in East Jerusalem has increased sharply over the last few months and PLO is incapable of organising effective resistance against it. Photo by ISM Palestine.

These acts of cruelty have not gone unchallenged. Last month, the PLO leadership in the West Bank surrendered to the pressure from the masses and called for a general strike throughout the West Bank. The strike was carried out in spite of severe difficulties endemic to a captive society. A boycott on Israeli products, for instance, is exceedingly difficult when the Zionist occupation makes Palestinian production nearly impossible. During the strike, the Palestinians inside the West Bank showed impressive solidarity. But the impression was that it was not enough. Nineteen year old student Sireen Barghouti said in an interview to the Palestine News Network: "We need to do more, we need to push our government to do more and every Palestinian should try their best to replace Israeli products with Palestinian ones."

But eventually, more was not done by the PLO bureaucracy, ending with the ultimate failure of the strike. The PLO failed, in particular, to mobilize the Palestinians with Israeli citizenship, which are now radicalized by the fresh memories of the recent Gaza massacre. Instead of taking advantage of that opportunity to unite the Palestinian masses, divided by Zionism into citizens and non-citizens, the PLO made the strike a West Bank only affair, which was hardly felt at all by Israeli capitalism.

The impoverished Palestinian workers, who are heavily dependent on the consumption of Israeli commodities could not maintain the strike on their own for much longer, and in any event, have relatively marginal importance for Israeli capitalism. By contrast, the Palestinians with Israeli citizenship are much more vital to Israeli capitalism as industrial workers and consumers. By not applying the strike call to them, the strike was betrayed and failed.

The policies carried out by the mayor which are “legal” and even encouraged by Zionist law, show that there is no end to Zionist ferociousness as long as it is left unchallenged by the masses. The Zionists claim that the houses have been built "illegally", quoting the fact that the authorities have consistently refused to give permits for their construction. What an utter injustice! The Palestinians need to build homes, and yet the Zionist state authorities, built through the taking of Palestinian land by force in the past, have the cheek to declare these houses “illegal”. The international labour movement must put pressure on the Israeli authorities and support all the progressive forces from within Palestine/Israel to stop this insanity. Hands off East Jerusalem! Let the Palestinian people live in the homes they have built!