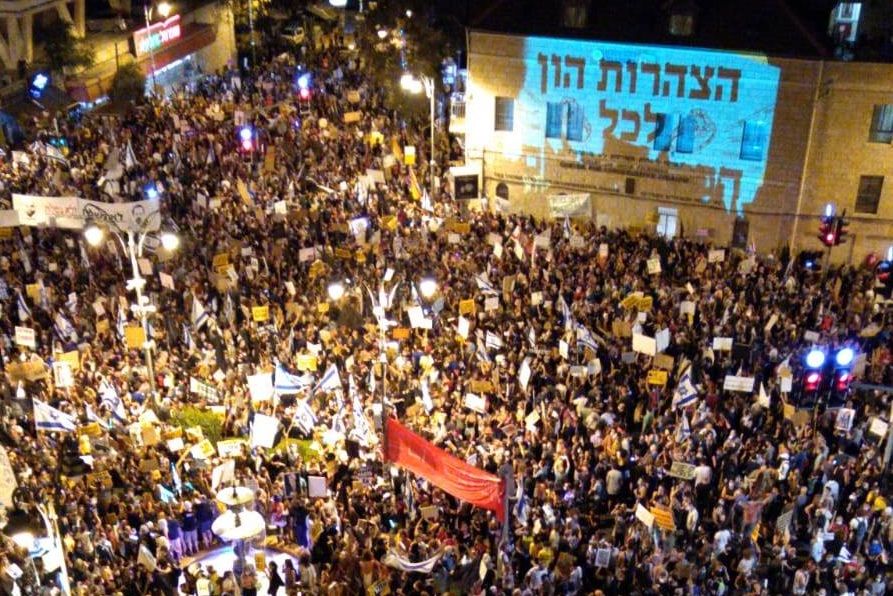 Starting on 14 July, Bastille day, protests by thousands of Israeli youth and workers have been shaking the Israeli regime. While with every new demonstration, more anti-Netanyahu protesters joined (the last one was attended by 10,000-15,000). Far-right counter protests could only mobilise between five and 500 people. Here, we publish a report by one of our supporters from Jerusalem which we received a week ago, followed by an analysis by Franz Rieger.

Over the past week, there have been several protests throughout Israel against Netanyahu’s dictatorship and his neglect of the citizens; before, after, and especially during the COVID pandemic.

I have attended two of the protests. The first one began on the night of 14 July, Bastille Day, and carried on way past midnight. Among the protestors, it was called the “Bibistille”. To my knowledge, it was the largest protest Jerusalem has ever seen, possibly in all of its history. Thousands of people stormed through the city centre, many being blasted off the roads by water cannons used by the Israeli police to try and contain the protestors. The police also used horses to try and scatter crowds of protesters, trampling them and pushing them back into the road from the pavement, where they would be blasted by water cannons again. It was like a war zone. At times, the protestors held a street, blocking it off from the police using their own barriers, shielding from their water cannons behind large signs stating “NO TO DICTATORSHIP”. Fires were started in bins. Revolution was in the air. Red flags were flown by members of Banki [The Communist Youth] and other revolutionary comrades.

The second protest I attended was on the night of 16 July. Although nowhere near as big as the “Bibistille” protest, it was still very successful. Banki Tel Aviv joined Banki Jerusalem in flying many very large red flags and completely colouring the protest with revolutionary red. The police had contained the protest to the street where Netanyahu’s residence is located, but had blocked off access just in front of the residence with barriers. On the other side, behind another set of barriers, were no more than five Netanyahu supporters, holding Israeli and Likud [Netanyahu’s party] flags. Overwhelmed with the intensity of the opposing protestors with their immense noise and vigorous waving of huge red flags, they quickly dropped their flags and fell silent. A few clashes between police and protestors broke out, all of which met with furious opposition from the protestors, and rhyming Hebrew chants meaning: “Officer, officer, who do you protect”? (שוטר, שוטר, על מי אתה שומר?)”

This is crazy! This really is the largest ever anti-Netanyahu protest in Jerusalem. Hard to substantiate how representative group is but its growing in numbers+people are fed up w/gov corruption. Netanyahu is becoming a liability-never saw days like this.
pic.twitter.com/Yi4Ga9GM6B

Analysis: the politics of division

Class struggle is beginning to break through the surface in Israel. In the past period, many Israelis, especially the “well-educated”, “center-left” intellectuals, were very quick to assure you that the Israeli masses would never rise up over class issues, and Benjamin Netanyahu would stay in power forever. The Israeli-Palestinian conflict and the “security issue” (i.e. the fearmongering of the right-wing government about Iran) would determine Israeli politics and the consciousness of the masses forever, they claimed. These people insisted that in Israel things were just different than in the rest of the world. The “security situation”, as well as “religion being just way more important here than in Europe” would prevent any outbreak of the class struggle and with it any possibility of uniting Jews and Palestinians along class lines. With this they tried to justify their inaction and support for the Zionist regime.

Many of these seemingly “left” liberals even embraced the idea of the Israeli population being divided into different “tribes” with different interests, which was put forward by Israel’s president Reuven Rivlin in a speech in 2016. He claimed that Israeli politics wasn’t determined by left and right, but by different “tribes”: different identity groups (secular, national-religious, ultra-orthodox and Arab). This is a policy of the ruling class aimed at dividing the Israeli working class, denying the existence or at least the importance of class distinctions and strengthening religious and ethnic sectarianism.

In the last two weeks, the Israeli working class and youth have proven these cynical and pessimistic “left” liberals wrong. While 10,000 Israelis are out on the streets, protesting against Netanyahu and the effects of the economic crisis, Netanyahu was unable to distract anyone with his loudly announced annexation plans.

Like in all other countries, the COVID-19 pandemic sharpened all the injustices and contradictions of capitalist society. Cuts and austerity in the health care sector, low wages, high rent and cost of living, domestic violence and the fragile economic situation – all these problems have been amplified tenfold by the pandemic. In Israel, one million workers were sacked after the beginning of the pandemic. The unemployment statistics climbed to 27 percent in May, then its publication was stopped. Experts estimate that now a fifth of the workforce is out of work. The Israeli state airline El Al sacked 70 percent of its employees at the beginning of the crisis, many of them young workers who have just finished their service in the army.

But the pandemic only amplified the contradictions that existed before. Capitalism is a system of the exploitation of the working majority by a small minority of capitalists. As Marx pointed out, “the accumulation of wealth at one pole is, therefore, at the same time accumulation of misery, agony of toil slavery, ignorance, brutality, mental degradation, at the opposite pole”. In order to keep the exploited and oppressed majority in check, the ruling class depends on a “divide and rule” strategy, consisting of racism and religious and ethnic discrimination. The Israeli ruling class has perfected this method, internally and externally. Externally by driving a wedge between the Jewish and Arab working class of the region with the occupation and annexation of Palestinian land and the Palestinian people. Internally, by dividing the Israeli masses along all possible ethnic, cultural and religious lines.

In an article by the Israeli Haaretz newspaper, two young protesters were asked whether they think that the protests will bring down Netanyahu and his government. They both express their doubts, saying that Netanyahu will probably stop the protests by “just throwing money at them” (i.e. making financial concessions to the working class). Theoretically that might very well be true. The only problem is: Netanyahu has no money to throw around!

The COVID-19 pandemic triggered the biggest capitalist crisis yet. The economic damage done in years and months in 1929 and 2008 was done in a few weeks in 2020. The crisis was building up under the surface for years. Low interest rates and high credit, the means by which the capitalists tried to get the economy going after the crisis of 2008, became the cause for a new crisis. This crisis could have been triggered by anything: the escalation of the trade war with China, a crisis in the middle east or a particularly stupid tweet by Donald Trump. But the causes for this crisis lie in capitalism itself: the anarchy of production for profit and overproduction. The crisis can only be solved with the overthrow of capitalism!

In times of capitalist crisis, the ruling class must save money, cut wages, jobs and social services. As a consequence, meaningful social reforms are impossible. In this period of crisis, there is no possibility for an improvement of the living standards of the masses under capitalism. Even if Netanyahu wants, he cannot calm the working class by granting them concessions. The only way to improve the economic situation of the working class is the abolition of capitalism, the expropriation of the banks and big corporations and a democratically planned, socialist economy!

Fight for “democracy” or for socialism?

Currently the protest movement focuses on Netanyahu, his corruption, his connections with big capital, his personal ambitions - and rightfully so. But Netanyahu and his scandals are only the rotten expression of a rotten capitalist system. If he were to be replaced by another bourgeois politician, nothing would change. The Arab Spring is a striking example of that. The Egyptian people brought down five presidents, but the banks and corporations are still in the hands of the capitalists and imperialists and so none of the problems that led to the revolution in 2011 have been solved.

The bourgeois liberals are happy to scream and shout at Netanyahu and criticise him in the harshest terms. They are afraid that he provokes the working class and youth with his aggressive right-wing rhetoric, his open racism and his self-absorbed short-sightedness. They want to replace Netanyahu with a more “democratic”, “respectable” bourgeois politician, in order to save the capitalist system. This is Haaretz’s and Kachol Lavan’s criticism of Netanyahu. They criticise Netanyahu for attacking democracy. But even the most perfect bourgeois democracy is only a democracy of and for the rich. Its only purpose is to ensure the influence of big capital and to keep the working class in check. Marxists, therefore, must make clear that, along with Netanyahu, we must overthrow the whole capitalist system. This can only be done by the working class and youth of the whole region, armed with a socialist programme. We therefore shouldn’t raise the rather vague slogan of “democracy”, which is also Benny Gantz’ slogan, but the slogan of “socialism!” and working class unity.

“A people that oppresses another people cannot emancipate themselves. The power that is needed to oppress the others always turns against itself ... “

This quote by Friedrich Engels, one of the founders of Marxism, sums up the situation in Israel-Palestine perfectly. While the protests are growing, Israeli state repression, in normal times mainly directed against the Palestinians, turns against the Jewish-Israeli working class. Uri Misgav writes on Haaretz.com:

“The police […] deploy exaggerated forces against the demonstrators. The men are armed with guns, some are on horseback. They contain the protest with restraint and without difficulty, until the moment when the commander in the field decides to mix it up. Then come the thugs from the Border Police and Yasam special forces, who got their training in the occupied territories. They push, hit, knock down and drag the protesters, make unnecessary arrests and invent stories about ‘assaulting a policeman.’”

Angry Israelis take to the streets of #Jerusalem to protest the Government dealing with the #coronavirus and the financial crisis it created. 🎥@rosenfeld_oren pic.twitter.com/J9idVBIz44

The border police and especially the Yasam special forces have mainly been used to intimidate, oppress, brutalise and kill Palestinians in the occupied territories, for example last year in the annexed village of Isawiya. Now, while unemployment is skyrocketing and the class struggle begins to escalate inside Israel, the Israeli state uses them against the Jewish-Israeli working class. The Israeli state does not exist to “protect” all Jews from terrorism or antisemitism. It exists to protect the Israeli capitalists from the Israeli und Palestinian working class and the oppressed masses of the region. While Palestinians are the ones who suffer most under the occupation, the occupation is an attack also on the Jewish-Israeli working class.

The Israeli state is founded on the lie that Jewish workers and Jewish capitalists have the same interests. This is not true. The only way forward for the Israeli working class is to fight together with the Palestinian working class and the oppressed masses of the whole region for the socialist transformation of society. Down with capitalism and imperialism! Forward to the socialist federation of Israel-Palestine, and the whole Middle East!