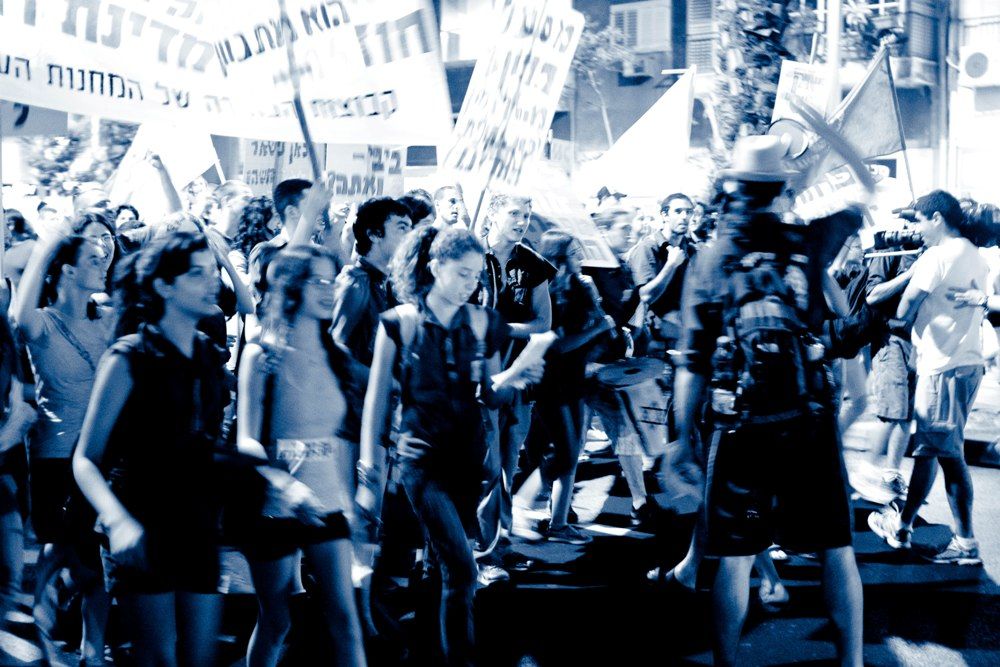 On Saturday 3rd September, the Israeli masses unequivocally announced that they would not allow themselves to be sidetracked and divided by the ruling class’ old trick of divide and rule, nor would they allow their movement to run out of steam in the summer heat, as half a million came out onto the streets to demand social justice and revolution.

There were 300,000 alone out in Tel Aviv. 50,000 participated in Jerusalem, which was twice the number seen in previous demos this summer. The protesters in this most ancient of cities chanted “The answer to privatization – revolution”. There were also 40,000 marching in Haifa, displaying a sea of red flags. Countless other cities had their own demonstrations which consistently broke records and exceeded the expectations of local organisers.

By all accounts, this massive event has smashed through the stale crust of Israeli politics and forced the ruling class, trembling, to pay attention to the real problems of the Israeli masses, Arab and Jewish. Correspondents there are flabbergasted that this many people could be brought out on a demo not related directly to questions of “security”. In truth, Israeli society has been changing under the surface for decades, and the extreme economic uncertainty and inequality (the highest in the developed world after the USA) that this has produced has now found its expression, with epoch changing implications.

This new movement is part of the developing global response to more than thirty years of naked capitalist counter-reforms that have led to declining living standards for the working class the world over, from Israel to New Zealand. For decades this process was partially hidden by increases in working hours and particularly in personal debt, maintaining the illusion of “middle class lifestyles” for workers. Capitalism’s historic crisis, of which there is no end in sight, spells the end of this fiction and it is for this reason that commentators are confused by the apparently “middle class” nature of this movement in Israel. Capitalism cannot maintain middle class living standards for the working class, as John Gray has pointed out for the BBC (The Revolution of Capitalism).

That is why this movement in Israel was not sidetracked by the recent spout of violence in Southern Israel. Millions of Israelis (the movement has 90% public support according to opinion polls) can no longer afford to pay the rent or the bills and so must move to defend their living conditions.

The Guardian interviewed one such typical “middle class” Israeli, so middle class she has to be subsidised by her parents. “Under a home-made banner saying ‘Walk like an Egyptian’, Ruti Hertz, 34, a journalist, said that until this summer people had been privately ashamed of their inability to make ends meet. ‘Each person was lonely in their situation, thinking it's my own problem.’ That had changed with the protests.”

She said that she and her teacher husband, Roi, were living on the same income as when they met 10 years ago. “We don't ask for much, just to be able to finish the month without taking from our parents.”

According to a report by the Taub Center for Social Policy Studies in Israel, housing in Israel is more expensive in terms of work than in 174 out of 175 large American cities. 7.7 years of work are required to purchase an apartment in Israel, as compared with 6.8 years in Australia, 5.7 years in New Zealand, 5.1 years in the UK, 3.7 years in Ireland, 3.7 years in Canada and 3 years in the US. Milk, cheese and egg prices in Israel were 6% higher than the OECD average in 2005, and 44% higher three years later (2008). In the automobile market, the numbers are even more dramatic: car prices were 46% higher than the OECD average in 2005 and 70% higher in 2008.

Where now for the movement?

Mass movements need to keep on moving forward, making one conquest after another. There is no doubt that the greatest conquest for the movement so far has been the raising of consciousness of millions of Israeli workers and youth. They have now seen their own power, and many cannot help but to draw conclusions that completely cut across the racist perspective fostered by the ruling class.

Some have complained that the movement has not immediately set itself the task of ending the Zionist policy of occupation also. But movements involving millions of people do not conform to the ideals of this or that activist group, but to the deepest and most pressing material needs and contradictions of the masses. What we must understand is that the basis of the Zionist policy of occupying Palestine is the acquiescence of the Israeli masses and their entrusting the Zionist state and the imperialist capitalist system it represents to ‘defend’ the living conditions of the Israeli working class. Thus the mass scale mobilisation of millions against this government which is precisely attacking living conditions is the first step to the liberation both of the Jewish and Arab working class.

As regards the interrelation of rising housing costs and the privatisation of social services, with the violent and wasteful expenditure on the military and settlements, the movement is beginning to draw the right conclusions. On Saturday there were banners in Tel Aviv proclaiming “social justice = leave the settlements”. The settlements alone cost $1bn per year.

The Israeli political columnist Nahum Barnea was quoted by Reuters saying “They [Israeli workers] saw... the flow of money into parasitic sectors, the distorted priorities of preferring building in settlements to fixing what is wrong in society and the rapid enrichment of those close to the seat of power”.

Protester Shahin Nasser told Haaretz, “Today we are changing the rules of the game. No more coexistence based on hummus and fava beans. What is happening here is true coexistence, when Arabs and Jews march together shoulder to shoulder calling for social justice and peace. We've had it.” Marwan Barghouti, a jailed leader of Tanzim-Fatah, has called for a million strong mass scale peaceful protest of Palestinians on September 20th when the UN discusses the two-state “solution”.

Although we do not support a two-state solution, since there can never be an independent Palestinian state under capitalism, such a vast and peaceful march would threaten to go beyond this narrow and infeasible goal by coalescing with the mass movement in Israel. The conditions for a united struggle of Jews and Arabs against the quagmire of Zionism and capitalism are being laid by this movement. This new consciousness for the Israeli masses is indeed a great conquest.

The government of Netanyahu has attempted to confuse and derail the movement by setting up a committee to “look into” the issue, which will take it a month. All the while hundreds of thousands continue to demand that their problems be solved. Netanyahu has already stated that most of these demands will not be met, so no one expects anything serious from this committee.

However, make no mistake, Netanyahu’s government is tottering, and with 90% support rates and record breaking demonstrations, it can be brought down. But what would it be replaced with?

The moderate leader of the protest movement, national student union chairman Iztik Shmuli, openly advocates only tinkering with the system (he is pro-business) in order to achieve “balance between Israel's destructive economy and a humane economy.” But he is naturally vague on the details of how this would be achieved, which results in a dangerous lack of leadership since he has no clear programme to take the movement forward.

On the other hand, Daphni Leef, recognised as kick starting the movement, openly associates the problems with the capitalist system and calls for a change of the whole social system. She gets a big response from the crowds when she makes these points, showing the burning desire and understanding of the need for a different kind of society.

Nevertheless, it is necessary to understand how to get there. Can house prices be brought down and social services invested in by cutting spending on the military and settlements? At best, this could only achieve a small and temporary respite to the vast problems of global capitalism which are engulfing tiny Israel.

Furthermore, what will be politically necessary to win this struggle against the government? Why, after all, are house prices going up, why does Netanyahu, like all the other leaders around the world, insist on privatisation and fiscal austerity? Why has Netanyahu just this last week armed those who live in the settlements, his base of support?

The answer to these questions lies in understanding the crisis of the capitalist system and the  political crisis this engenders. Netanyahu cannot simply pump money into public housing and social services because he is a representative of the bourgeoisie, which in these times can only make profits through parasitically speculating on property and privatised assets. He cannot withdraw subsidies from settlements because he relies upon that narrow layer for his political support, hence the fact that he has armed them.

Daphni Leef and the other leaders of this magnificent movement need to show clear leadership and take the movement forward. There is a limit to what endless marches and camp-sites can achieve in the face of an intransigent bourgeois regime. What is necessary is to utilise the mood that has brought hundreds of thousands to their feet by calling a general strike, which would transform the situation in the Israeli working class. If their demands are still not met, they should call an indefinite general strike. There is nothing to be afraid of with such a mass base of support. The Palestinians and Arab Israelis should be mobilised to participate as this too is in their interests. That would be a mortal blow to the regime.

Such determination and militancy exists, and will be needed, because ultimately there is no solution to the problems of Jewish and Arab people under capitalism, which has only offered 64 years of war.