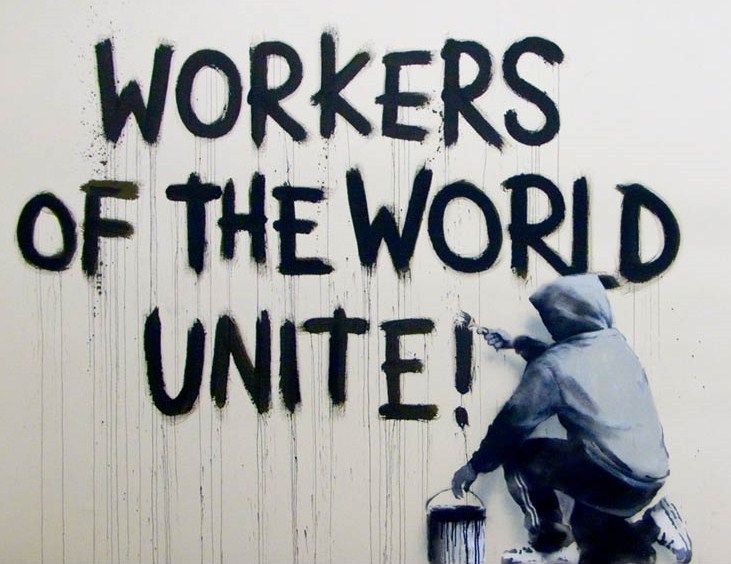 Muslims in France were the first "collateral victims" of the killings of last January 7-9 in Paris. Anti-muslim propaganda has been a constant theme in the media and in the political discourse in France. Of course by attacking the Muslims they really mean Africans who are the real objective of their attacks. But since the January events, media sensationalism and racist acts have skyrocketed. These constant attacks against one section of the workers of our country must be challenged by the entire labour movement.

Since the Attacks, a flood of anti-Muslim propaganda has been pouring out. Through its media and politicians, the ruling class insidiously insinuates - or directly states, in the case of the National Front - that Islam and its adherents are the cause of most of the ills of society. France's Muslims are challenged to demonstrate their allegiance to the nation. This was the case on television when Philippe Val - the former director of Charlie Hebdo, since then appointed director of France Inter (a major french public radio station) by Sarkozy - required Muslims to "distance themselves from terrorists and formalize their commitment to the French nation and the secular republic." Whether or not the tone is "friendly" or aggressive, in all cases Muslims are made to appear as potential "enemies from within".

At the same time — and as a consequence of this racist propaganda — racist attacks against Muslims have skyrocketed. The Collective Against Islamophobia in France (CCIF), in its annual "assessment" released on February 11th, identified 764 Islamophobic acts (discrimination, assaults, desecration of Muslim areas...) in 2014, a 10.6% increase since 2013. Worse still, in the month following the attacks in January, the collective recorded a 70% jump in Islamophobic incidents in comparison within the same period in 2014. On January 14th, in Vaucluse, a 48-year-old Moroccan man was killed by 17 stab wounds inflicted by a neighbour for no apparent reason. As for discrimination, 4 out of 5 "Muslim" women, whether veiled or not, have been subject to discrimination, occurring mostly in public institutions (public education, town halls, prefectures, commissariats). This demonstrates the growth of state racism, which has assumed alarming proportions since the killings.

Hypocrisy of the national union

In actual fact, Islamophobic racism is much more prevalent than the numbers suggest, which appears to be almost invisible in the mainstream media. These facts do not seem to worry the politicians - on the contrary. Their silence regarding the "anti-Muslim" words and deeds reveal the hypocrisy and emptiness of the slogan "national unity". There can be no unity of the whole population in a society divided into antagonistic social classes. Like its predecessors, this "socialist" government is at the service of the French ruling class, as evidenced by their policy of austerity. To "save the country" from the capitalist crisis, they implement budgetary cuts, privatisation of public services, freezing of salaries and pensions, and direct and indirect tax rises. All these sacrifices are expected to be made by the working classes and not the capitalists, who are pampered with fiscal exemptions without any obligations. "National union" therefore serves as a cover for class politics.

As much as this national unity is a farce, at the same time it is used as a powerful racist tool, promoted by the mainstream media, with the aim of dividing workers along religious lines. On the Europe 1 channel, the right-wing journalist Philippe Tesson perfectly summarised the current ideological offensive: "the problem in this country is the muslims!" The "problem" in France is therefore no longer the crisis, unemployment, austerity - or those responsible for all this: the capitalists and the government. This hypocrisy revealed itself strongly in the recent debates around the Macron Law. Valls and his Minister of Economy have appealed to the "climate" of national unity to put pressure on the "troublemakers" within the Socialist Party in order to justify this new offensive against workers' rights. National unity and the attacks against Muslims are only two sides of the same campaign of diversion in the service of the ruling class.

Reactions among the youth

Since the attacks, racist propaganda has focused on the condemnation of that sector of the youth, particularly in the suburbs, who expressed a rejection of the slogan "je suis Charlie". The Ministry of National Education has identified at least 200 cases of opposition to the minute of silence on the 8th of January. The forms of protest were varied, one individual shouted "Allah is great", another expressed his support for the terrorists, but most of them simply "did not feel solidarity with Charlie". The condemnation of the hypocrisy of an unequal republic and of French imperialism was the motive behind these reactions: "why a minute of silence for these victims in particular?"

It did not take long for the repression to start. Under pressure from the education authorities, disciplinary councils and expulsions were organised to remind the many protesters that the state does not take the "values of the Republic" lightly. In 40 cases, the teachers and the management of institutions reported students directly to the police or judicial authorities. The climate of repression reached grotesque levels when an 8-year-old child in Nice was reported to the police by the management of his school: he had uttered the words "solidarity with the terrorists". For the media, and for a majority of politicians both right and "left-wing", these reactions of young people were another opportunity to point a finger at the working class neighbourhoods where "the enemy within" is hiding. The media says these young people at best do not adhere to the values of the Republic, and at worst constitute a real terrorist threat.

What explains these reactions on the part of young people, particularly Muslims, whose families often originate from the Maghreb or Sub-Saharan Africa? The ruling class was quick to respond: it is a "lack of education". The Minister of Education, Najat Vallaud-Belkacem, has promised teams of educators to better educate students and teachers in secularism and strengthen civic and (completely new) moral education. This moral approach to the question is very common among politicians, as this superficial "progressive" image comes very cheap.

It is deplorable that the leadership of the French Communist Party (PCF) and the Left Front (Front de Gauche) haven't dissociated themselves from this approach. Pointing the finger and saying that the most exploited layers of the population need education is ridiculous and insulting. The root causes of a lack of adherence to abstract "values" of the Republic are to be found in social reality. Whenever did "freedom and equality" become a reality for these people? The neighbourhoods where the majority of young Muslims live have the highest rates of poverty and unemployment. They often live in unhealthy housing, and the youth are deprived of a future.  Added to this is the constant discrimination they face in education and in their search for housing and employment. There is also police harassment. The "blunders" of the police remain largely unpunished by the justice system, which is hard on petty crimes, but lets loose the big fraudsters such as Cahuzac, Bettencourt, etc. Over the years, no government has done anything about this worsening situation. What "education" might make us "love" a Republic that tolerates and organises such amount of inequality and oppression?

The permanent racist campaign against "the Muslim problem" has without doubt convinced many young Muslims that they have nothing positive to expect of the Republic. In 10 years, two laws were passed against the veil and the burqa, which were in reality aimed against Muslims through "debates" and "reports" in the media. In this context, the caricatures of Charlie Hebdo - not only of Mohammed, but of muslims in general - were seen as a part of this campaign. Whether are were aware or not of the left tradition of "Charlie", some young people have made a connection between this newspaper and the openly racist political forces such as the National Front. This should give pause to those on the left who claimed loudly their abstract right - regardless of the context - to criticise religion. Of course, we do not question this right. But the massive exploitation of the Charlie Hebdo cartoons by the bourgeoisie was far from surprising. In the concrete context we have just described, this was just a "left" cover for the racist campaign that has been going on for years.

What should our attitude be?

Racist attacks against a part of the working class must not be tolerated by the labour movement. What is to be done?

1) Denounce and expose the racist campaign of the bourgeoisie as an attempt at diversion. We must defend the unity of our class - irrespective of religion, ethnicity, etc. - against the capitalist system and its bourgeois Republic.

2) Mobilise the labour movement against attacks aimed at Muslims. It is inconceivable to leave this important task to the very same state which, through its police and judicial system, oppresses Muslims on a daily basis.

3) Denounce attempts to justify the interventions of French imperialism as a “fight against terrorism.”

4) Reject, within the labour movement, all forms of abstract "anti-religious" political activism.   Certainly, Marxists are not religious. They defend a scientific and materialist explanation of the world and, in fact, of religion itself. But precisely for this reason, they do not have a dogmatic approach towards religious workers, who have to mobilise - alongside their non-religious comrades - in the common fight against capitalism. As Lenin explained in 1905: “But under no circumstances ought we to fall into the error of posing the religious question in an abstract, idealistic fashion, as an ‘intellectual’ question unconnected with the class struggle, as is not infrequently done by the radical-democrats from among the bourgeoisie. It would be stupid to think that, in a society based on the endless oppression and coarsening of the worker masses, religious prejudices could be dispelled purely by propaganda methods. It would be bourgeois narrow-mindedness to forget that the yoke of religion that weighs upon mankind is merely a product and reflection of the economic yoke within society. No number of pamphlets and no amount of preaching can enlighten the proletariat, if it is not enlightened by its own struggle against the dark forces of capitalism. Unity in this really revolutionary struggle of the oppressed class for the creation of a paradise on earth is more important to us than unity of proletarian opinion on paradise in heaven.”

5) Reject “national unity” - the reactionary motto of the ruling class - and their alleged “Republican values”, which are supposed to cement it. Explain that capitalism is incompatible with genuine liberty, equality and brotherhood.

6) Mobilise all the workers, whatever their origin, religion, etc., against the corrupt capitalist Republic. For a socialist Republic as part of a world socialist federation!