Ireland
Share
Tweet
After displaying a high level of militancy and determination, the Waterford workers have ended their occupation after the union leaders brokered a deal with the owners of the company. This is a bitter blow for the workers, but it also highlights the need to struggle within the unions for a fighting leadership.

After seven weeks of occupation UNITE the union representing the Waterford Crystal workers have done a deal with KPS, the American company that has bought out part of the company's assets. The decision is a bitter blow to the workers, many of whom feel that the company was holding a gun to their heads, the issue being the threat to withdraw €10 million of pension payments. As the Irish Times explains: 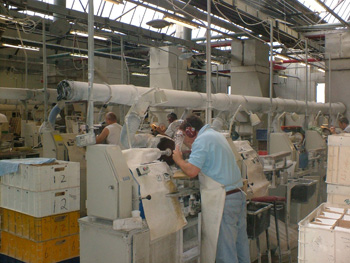 "Some huddled in groups discussing the day's events, others quietly took down posters; the rest said their farewells to each other.

"The Gallery showrooms attached to the Waterford Crystal plant at Kilbarry had been, more or less, a home to its occupants over seven weeks. Under other circumstances, such as saving all 480 jobs at the plant and solving the complicated pension issue, the end of the occupation would have been celebrated. This was not the case yesterday.

"Crystal blowers Billy Kelly, Nicky Hayes and Willie Dwyer were devastated. ‘It's very sad and it's a bitter pill to swallow,' said Mr Kelly, who has worked at the plant for 30 years. ‘The Government didn't come on board with this whatsoever, we were on our own. The gun was put to our head... We had no choice, the union's back was against the wall."

"Hayes, who has 28 years' service with the company, spoke of the plant as a tourist attraction. ‘There was 300,000 people coming through here each year, they had to eat somewhere, they had to drink somewhere for the few days they were here,' he said. ‘The reason they came to Waterford was because of Waterford Crystal,' he added.

" ‘We're off the tourist trail and we'd often bring up and [let] them blow a glass and they were just absolutely amazed; they just couldn't believe it. We got loads of letters from people around the world, and photographs'."

There's no immediate prospect of manufacturing starting up again at the plant, although there are rumours of a group of local businessmen being in discussions. The company name and tradition are worth a fortune in and of themselves. The fact is though that only the nationalisation of the factory under workers' control and management could have saved the plant, the future of which will otherwise be completely in the thrall of "market forces".

The Waterford workers have been a beacon to workers in Ireland and internationally. Their struggle is an indication of the strength and determination of the Irish working class. It is very hard to win a defensive struggle in a deep recession or a slump if the trade union leaders are not prepared to spread the struggle and coordinate all sectors into one national struggle. The Waterford workers were at the front of the monster demonstration in Dublin in February, a clear indication of the fact that they had widespread among the Irish working class. Had the union fought for the clear demand of the nationalisation of the company the outcome of this occupation could have been very different. If the government could nationalise AIB, then why not nationalise Waterford? That would have been a victory that would have transformed the political situation in Ireland and far beyond.

The experience of Waterford is one more lesson for the Irish workers. The crisis we are facing is a severe one, and it requires a generalised fightback. For this what is required is a militant, fighting trade union leadership that is prepared to mobilise the full force of the Irish working class. Waterford will not be the last fight. It is in fact only one of the opening shots in a much wider and long term battle.