Ireland
Share
Tweet
Union after union has been balloting its members over strike action and the message from the rank and file is clear. SIPTU, the teachers, the nurses, the TEEU are all coming out; in IMPACT, the biggest public sector union 65% voted favour and even in UNITE where there is a big private sector presence the votes are on a knife edge. The conditions are all there to transform March 30 into a full-fledged one-day general strike, if the trade union leaders were prepared to make such a call.

If anyone had suggested a few years ago, that Ireland would be facing a deep recession, that Waterford Crystal would be occupied, that Labour would be ahead of Fianna Fáil in the polls and that we would be more or less on the brink of a one day general strike, they would have been told to go and put some water in the glass to help wash down the whiskey. The whole place was booming, houses popping up everywhere, more motorways than spaghetti junction and thousands of people returning home from abroad to join the boom. 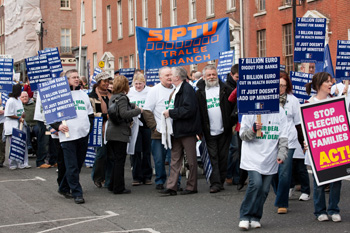 Transform March 30 into a one-day general strike! Photo by infomatique on flickr.

Now, that seems like another age. Unemployment is racing towards 400,000 and despite all the bailouts and even formal nationalisations of the banks the economy is spiralling out of control. Tax revenues fell by 24% in the year to January. The economy is expected to contract by 5% this year and Cowen and Lenihan are preparing a budget that will strip public services to the bone. That combined with the pension levy is an indication that the absolute priority of the Fianna Fáil is to place the burden of the crisis entirely onto the shoulders of working people and their families.

The boom years saw a huge increase in inward investment into the country; the Irish economy is intimately tied into the British economy as well as US capitalism. But this has a flip side. Ireland is also tied into the Euro zone, which means that currency fluctuations between the UK pound and the Euro have a significant effect on the economy. The fall in the value of the pound means that Irish exports are more expensive and therefore less competitive. The increase in the cost of diesel in the past period also served to increase the cost of exporting Irish foodstuffs. Ireland is relatively remote from the rest of the Euro zone and the bourgeois are already talking about the high cost Irish economy, Ireland's credit rating has been on the slide throughout the recent period even compared to the general crisis.

All this adds up to a big bill, that the Irish bourgeois have absolutely no intention of paying. That is what's behind the decision of the government and the bosses to pull out of the national agreement on wages. But there is one fundamental problem with that, the Irish working class has been enormously strengthened in the past period. Unemployment was relatively low and people have far more to defend and fight for than they've ever had in the past. This is the key factor in the current situation. The working class is undefeated and the unions are intact. As we have explained recently the leaders of ICTU and its affiliated unions are under enormous pressure. 200,000 people marched through Dublin on the 21st February and the votes that are coming in from the various unions balloting for strike action on March 30th are massively in favour of action.

Ireland is very different to what it was like even in the relatively recent past. There have been big social changes as well. But the key is this, the Irish Bourgeois is very weak, dominated by imperialism and faced with a working class that is beginning to stand up to its full height.

We pointed out recently that the run up to the March 30th strikes is a bit like a poker game, David Begg and the other union leaders would love an agreement they can sell to the members. At the time of writing the bosses are asking for talks and it is possible that the trade union leaders will see this as an opportunity to walk into the negotiations with a big mandate from the membership.

At the same time however, Cowen and the bourgeois won't want to give an inch unless they absolutely have to. The government are in a serious hole, they have to make the workers pay for the crisis, but they can't afford to let the movement run out of control. The whole of Europe is ringing with workers' anger and in many ways Ireland is the sick man.

This anger is beginning to be channelled through the Labour Party as well. The Labour Party poll ratings are going through the roof and despite the best endeavours of Eamon Gilmore to get the strikes called off and for the bosses to "talk to the unions" it is possible that the workers' movement could begin to force the Labour Party ranks to the left. The agenda for this year's party conference includes a clear demand for the nationalisation of the banks under public control and scrutiny. The anger of the workers will no doubt be reflected in the conference to one extent or another.

Monday March 30th could potentially represent a huge demonstration of worker's anger. Hundreds of thousands would be on strike and on the streets. Essentially it could represent a one-day general strike. What does that mean? Nothing would move, the government would be suspended in mid air, not only in Dublin, Cork and Limerick, but Galway, Waterford, Athlone, Wexford and in every little town. The ballot results are coming in thick and fast. SIPTU, the teachers, the nurses, the TEEU are all coming out. The vote in IMPACT, the biggest public sector union is 65% in favour and the executive are meeting to decide what leeway they have in respect of a union rule that requires a two-thirds majority. Even in UNITE where there is a big private sector presence the votes are on a knife edge. Even if the trade union leaders back off from a direct confrontation the size of the votes is an indication of the mood within the working class.

A one-day general strike demonstrates the power of the working class, and it gives people a clear picture of what they can achieve collectively in struggle. It is no surprise that James Connolly saw the organisation of the working class into the trade unions and the Labour Party as crucial to the transformation of society in Ireland. What is needed is a programme that offers a way out of the crisis.

Many Irish workers will be beginning to draw political conclusions from the crisis. The most important job for all of the genuine Irish Marxists is to come together to lay the foundation for a force that can begin to challenge for the leadership of the workers' movement. With a clear-sighted Marxist leadership the power of the Irish working class would sweep all before it.