Ireland
Share
Tweet
The Irish economy is facing a serious downturn, with bank after bank facing crisis and unemployment shooting up. The government insists on bailing out the banks with public money desperately trying to stave off a recession. But they cannot escape the inescapable.

While the Irish economy is expected to contract by 5 percent in 2009, which makes it the second worst recession within the EU after Latvia, the number of unemployed, which has reached 300,000 (8.3 per cent), is expected to reach as high as 400,000 (or around 11 per cent) by the end of this year1. So far the response of the Irish government consists in introducing €2bn budget cuts that would come from wage cuts for workers in the public sector and a reduction of services provided by the state. 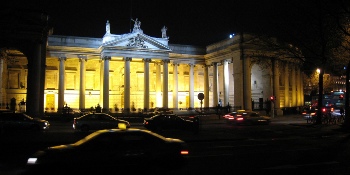 The government has spent billions of pounds on recapitalising the ailing Irish banks. Photo by Pat+ on Flickr.

On the other hand, the Irish financial system is breaking down and the government has already nationalised the Anglo Irish Bank. The two main Irish Financial institutions, Bank of Ireland (BoI) and Allied Irish Banks (AIB), are also facing shortages of capital and the government has decided to recapitalise them with €6bn. That is much more than their combined market value, which last Saturday, 24 January, stood just above €1bn. Their nationalisation, for the moment, is ruled out.

The crisis of the Irish banks, however, has no end in sight. Since the market value of Irish bank shares reached a peak value of €59.44bn in February 2007, nearly two years later their market value stands at €1,65bn2. Years of speculation, artificial extension of the Irish economic boom by means of easy credit, and huge profits ended abruptly at the end of September last year when the top executives of the Irish banks informed the government that they didn't have capital to face their liabilities.

The Dáil approved on the 4th October last year the Credit Institutions (Financial Support) Bill 2008 in order to guarantee with €400bn the liabilities of AIB, Bank of Ireland, Anglo Irish Bank, Irish Life & Permanent, Irish Nationwide and EBS building society. Later the guarantee was expanded to €500bn to cover some foreign banks operating in Ireland.

The crisis of the Irish credit system just followed the crash of the Irish housing market3 which triggered a generalised fall in retail sales and the money supply, and a sharp increase in the number of the unemployed.

In that situation and since the budget deficit keeps increasing as revenue decreases the government plans to cut €2bn in government spending while BoI and AIB are going about to get €6bn. The banks have been decisive in the degree that the crisis has reached and for nearly two decades made huge profits. But while they get bailed out the workers must bear the sacrifices ahead. That is clear from the words of the Taoiseach (Prime Minister), Brian Cowen:

“Those who are in employment [not just those who lost their jobs], whether in the private or the public sector, will also share the burden. A particular responsibility lies on those who have benefited most from the rapid growth of the economy over recent years, whether as investors, self-employed or employees. They are being asked to show solidarity with those who are less well off.”4

Apart from a reference to investors and self-employed, in passing, it is clear that those who will have to show “solidarity” are the workers “whether in the private or the public sector”. But solidarity with whom? With the rich? Mr. Cowen also tells us that the workers were the main beneficiaries of the past economic boom! 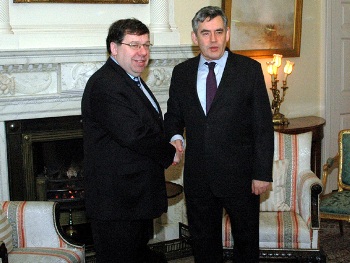 Brian Cohen asks workers to 'share the burden' of the crisis. Photo by Downing Street.

Economic figures, however, reveal a very different picture. Bosses based in Ireland during the economic boom were making much more profits than bosses in any other EU economy. For example, while in Ireland profits per employee stood as an average of €45,800 in 2005, the average figure for the EU-15 was only €29,500. For the UK, it was €22,500 according to the EU’s KLEMS database5. Net profits at enterprise level increased between 2000 and 2005 at more than twice the rate of wages. Net profits per employee increased three times the rate of cost per employee. On the other hand, Irish wages are 25 per cent lower than the top ten EU average wages while consumer prices are among the highest in the EU. If that wasn’t enough, Irish employers pay one of the lowest rates of employers’ social security contributions in the EU (PRSI), 10.7 per cent while the UK employers pay 12.8 percent and German employers 20.8 per cent. On top of that, corporation rates are the lowest in the EU, 12.5 percent6.

The economic boom in Ireland has brought about a huge transfer of wealth from the workers to the bosses. The wage share of national income has gone down from 71.2 to 54 per cent between the periods 1980-1990 and 2001-2007. Therefore, it is clear that workers were not the main beneficiaries of the past economic boom, but they will have to sacrifice themselves even more. That is all that capitalism can offer to the workers.

The €2bn in cuts are going to come mainly from pay cuts for workers in the public sector and for increases in the contribution of workers to their pension schemes. IBEC, the employers group, has already let us know that further pay increases agreed in the last partnership deal will have to be deferred, at least one more year, and that the minimum wage cannot be increased. That means that workers in the private sector also will have to show “solidarity” with the wealthy.

The strategy of government and employers, according to John Fitzgerald (ESRI)7, should be, in the medium term, to lower wage rates in order to “substantially improve competitiveness as “the key to the restoration of full employment”, after restoring “order to the domestic banking system”. They don't say a word about how employers and speculators are going to show their “solidarity.

The role of the banks

The banks have played a major role in the present crisis by increasing its magnitude. The Irish economic boom that started in the early 1990s came to an end in 2001 in the productive sectors of the economy. Capitals then shifted to more profitable sectors such as construction. Easy credit allowed a housing bubble to grow out of proportion.8

The Credit Institutions (Financial Support) Bill 2008 didn't solve anything. If anything, it has only postponed the collapse of the Irish financial system that should have taken place between September and October 2008. At present, banks are lacking capital. Private investors are not interested in injecting capital. The Anglo Irish Bank, shrouded in fraud and full of bad debts, has been the worst affected by this lack of capital and the government decided to nationalise it in order to save speculators, developers and big businessmen, chief clients of Anglo Irish Bank. That nationalisation in its present form, then, means mainly passing bad debts to taxpayers.

After the government has taken the risk of guaranteeing banks liabilities for over €400bn, it does not make sense to leave the banks in private hands, particularly when the total market value of the Irish financial system is below €2b. Recapitalisation of the banks on the back of taxpayers without their nationalisation is another way of postponing the final crisis of the banks, taking all the risks but none of the benefits. After the huge profits they made during the past decade and the frauds in which they have been involved, banks should be nationalised without any compensation.

The economists and politicians of the establishment are divided on whether to nationalise or recapitalise, according to which version of capitalism is argued. Larry Summers, Obama’s economic advisor, has said that if banks are nationalised “the focus isn’t going to be on the needs of banks... it’s going to be on the needs of the economy for credit”. The Irish Times9 has offered the latter statement in a series on the financial crisis as an argument against nationalisation, because it is argued that easy credit created the crisis. It is monetarism versus Keynesianism.

Most crises actually manifest themselves first as credit or financial crises, which is only how they look in appearance. Underneath the appearance lie crises of overproduction and disequilibrium between production and distribution. Credit normally allows for the expansion of production increasing the dimension of economic crises when these take place. But it doesn’t mean that “easy” credit solely can account for economic crises. According to Marx, “what appears as a crisis on the money market in actual fact expresses anomalies in the production and reproduction process itself.”10

Yet, it is interesting to notice that the argument against nationalisation above is still so consistent with the same monetarist practices which have led us to an increasing gap between rich and poor, and, ultimately to economic disaster. The arguments in favour of nationalisation coming from the establishment, on the other hand, are based on desperate attempts to save the system and with it, the fortunes made by a few during the economic boom. Either way, the government and their advisors just follow the logic of production for profits, rather than in order to satisfy social needs, which has become a dead end for society as a whole.

The role of credit in supporting and creating economic activity cannot be underestimated. A recovery plan for the economy demands first of all the nationalisation of all the Irish banks. However, the nationalisation of the Irish banks cannot just serve to rescue bankers, developers and other speculators by assuming their billions in bad debts. Under public control and the democratic scrutiny of workers, credit would be allocated primarily to those economic activities aimed at creating jobs and improving labour and living standards for all.

The defence of jobs, equally, would require the nationalisation of the companies that cannot guarantee jobs, labour standards and wages. A way out of this crisis that would benefit workers and the majority of society, rather than the rich minority, demands measures very different to those proposed by the economists and politicians of the establishment.