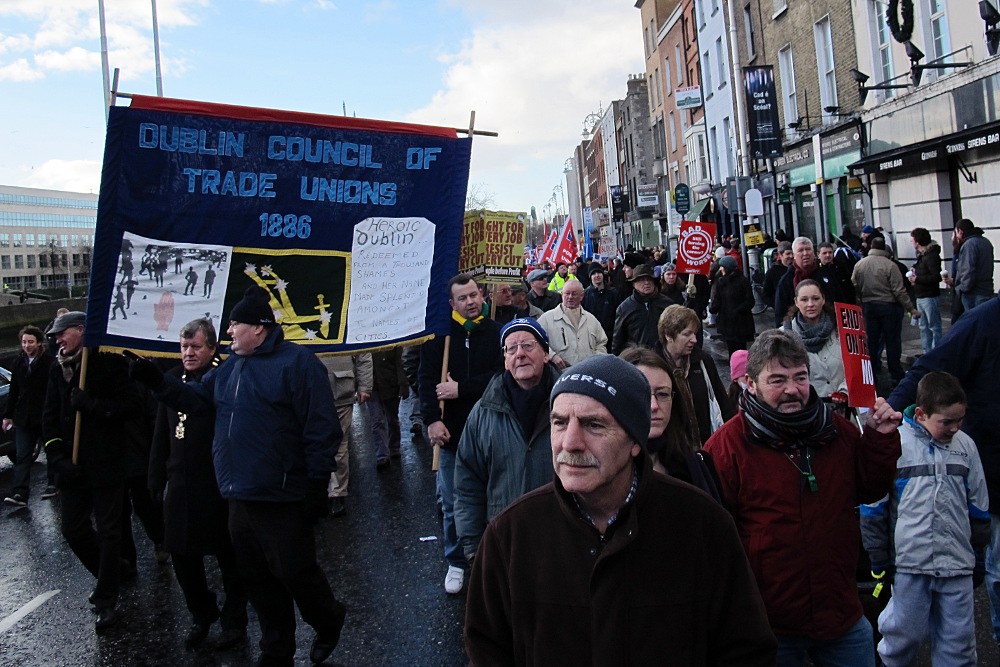 100,000 marched from Wood Quay to the GPO today in protest against the austerity measures outlined in the four year plan despite the cold wintery weather. A few even demonstrated in a curagh on the Liffey – the workers navy has arrived. Meanwhile the government are behind closed doors discussing the bailout package with the officials.

The contradiction between the reasons for the crisis and the government’s so called solution is stark. On the one hand the bankers and the speculators – the so called risk takers, put us here, but the risk has been transferred onto the very people least able to take any more “risk”. The minimum wage is to be cut by €1 per hour which amounts to an 11.56% cut. It’s the sort of situation that people write songs about, which is convenient as Christie Moore himself was on hand.

There were dozens of trade union banners from SIPTU, Impact, INTO, TEEU and TUI among others and many home made placards in evidence also. It is clear that the political crisis has put the class struggle back on the agenda. The demonstrations against the pension levy in February last year and the demonstration on November 6th 2009 were of similar size, but this time the mood is different. The government is on the retreat and the stakes have been raised massively because of the intervention of the EU and the IMF.

Cowen and Lenihan have nowhere to hide, the by-election on Thursday illustrates that. Now, 95 years after the Easter Rising the choice of the GPO as the rallying point for the demonstration illustrates the anger in the state over the government being forced to go begging to Europe for a bailout. In an ex-colonial country like Ireland the memory of foreign rule runs deep.

But the crisis in Ireland is a crisis of Capitalism and it falls most heavily on the working class. That’s why there are big demonstrations like this, and that’s why the FF and the Greens are going to get banjaxed in the forthcoming election. But central to the struggle against the austerity and the cuts has to be the trade union movement and particularly its leadership. Whilst the trade union leaders made some important speeches today, what they do tomorrow is the important thing. 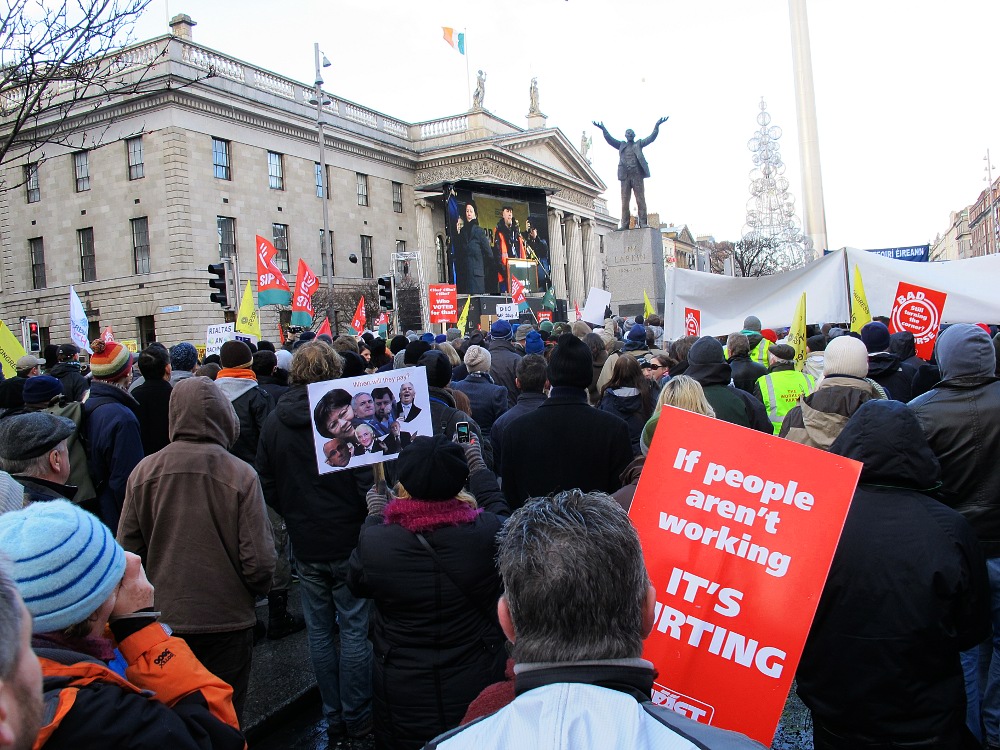 Photo: lusciousblopster The cuts outlined in the four year plan will re-emerge in the budget. The trade union leaders have a huge responsibility to defend the public services and their members. The days of the Celtic Tiger have long passed now. The idea that somehow “Social Partnership” can resolve the problem has been shown to be an illusion. Everytime the trade union leaders and the government have entered talks they’ve collapsed because of the scale of the crisis. Now the Croke Park Deal is under threat although the government has tried to avoid a direct conflict for now, no doubt for fear of the reaction to further wage cuts. The government intends to “fully implement” the deal, which means attacks on services and workers conditions. The four year plan includes cuts in wages for new entrants into the public sector. This is an attack on the Deal via the back door. But it’s also an attack on young people, at a time when emigration is on the rise and unemployment is over 400,000.

The movement has to campaign to defeat the cuts and drive the government out of office. The demonstration today shows the extent of worker’s anger. But the next step should be to galvanise the movement against the cuts into a 24 hour general strike encompassing private and public sector workers together. As the placards said today Fianna Failed. Now’s the time to drive them out.