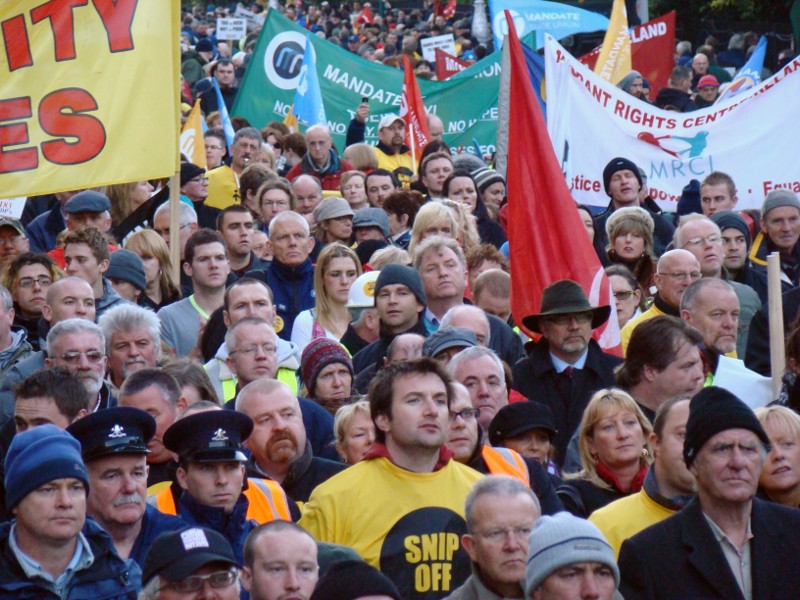 The Croke Park deal has been pushed through by the ICTU leaders. On the surface, the policy of “social partnership” would appear to have won out. But this is based on the idea that such a deal will lay the ground for an end to further attacks. Nothing could be further from the truth.

The results of the SIPTU and IMPACT ballots recently led to the Croke Park deal eventually being pushed through by the ICTU leaders, aided and abetted by the whole of the bought and paid for press and with the full support of the bourgeois. After all, the whole of official bourgeois society was united around one thing: the Irish working class, if not to blame directly for the crisis, are going to have to foot the bill.

On the surface, the policy of “social partnership” would appear to have won out in the face of a determined Fianna Fáil/Green Party coalition who hadn’t been “convinced” by the deal offered in December. But it doesn’t take a great deal of political analysis to uncover the contradictions in Irish society which mean that this deal is rather less than it might appear on the surface and potentially a divisive and dangerous weapon that the ruling class will delight in beating us with over the next four years.

There is a clear desire among workers for stability and for an end to the threat of wage cuts and job losses. Ultimately this is the reason why the deal was accepted. But with the experience of budget after emergency budget, levies and more levies and the constant threat to workers and their families it is quite clear that the level of trust in Cowen and Lenihan is at an all time low. We have explained on several occasions that only militant action could stop the assault on the public sector:

“…there is truly ‘nowhere else to go’. The only way to stop the bosses’ onslaught is through coordinated national industrial action. If we give the bosses an inch they’ll take a mile and a country mile at that. Social partnership in a huge boom is an easy game; the bosses can afford to offer a few scraps to the workers. But under conditions of deep slump and crisis all bets are off.

“To rely on the old methods from the Celtic Tiger days is very short sighted. The bosses won’t make any concessions unless they absolutely have to do so. Relying on social partnership will be like firing a pea shooter against a tank. We know that weakness invites aggression. Just look what Thatcher did in Britain in the 1980s. The British trade union leaders held up the white flag and the Tories saw it as a sign of weakness.” (Fightback: Ireland: class struggle on the rise as the slump deepens)

This agreement is built on sand and, more to the case, shifting sands. The background internationally to events in Ireland is the deep crisis in the eurozone. The general strikes in Greece, Italy and Spain and the rest of the continent are a reflection of the political conclusions being drawn by the working class. There have been huge demonstrations and massive shifts of opinion in Ireland, huge votes in favour of strike action and even what was essentially a public sector general strike. The whole of the last two years has been dominated by huge instability.

As we explained recently:

“As such the goal posts could be moved at any stage and it is quite likely that the Coalition will be back for more. The gloves are off, the FF and Green Party ministers know that they are going to be ditched at the next election. They have a job to do on behalf of the bourgeois; make the workers pay for the crisis. This is a one sided Civil war against the trade union movement and the working class. In these circumstances the role of the trade union leadership has to be to put forward an intransigent class position. This crisis is of the bosses’ making. The government will no doubt claim as will their counterparts in Greece, Spain, Portugal and Britain, that there is no alternative. But any policy that attacks working people has to be opposed, and more effectively than the trade union leaders have done so far.” (The Croke Park Deal; weakness invites aggression – unions must defend jobs and services, 8/6/2010)

The experience of the policy of “social partnership” has been that sooner or later the illusions of the trade union leaders have been wrecked either on the basis that the government have shown Begg and McLoone the door as they did with the two week unpaid leave proposal in December, or the pressure has built up from below and forced the trade union leaders to organise demonstrations and actions, and in many cases against their better judgement.

Trotsky pointed out in the Transitional Programme written in 1938 that the trade union and labour leaders represented the most conservative layer in society. Again in 1940 he explained that no matter what, they would try and reach an agreement – any agreement - with even the most reactionary government. He explained further that under conditions of crisis these agreements will always fall down on the basis of pressure from the bosses or the workers. Those words ring very true today.

It’s likely that the smaller unions in the public sector will be forced to fall in line with the decision on Croke Park. Unite has done so recently. But the problems will emerge quickly once the Government tries to introduce the “reforms”. The objective difficulty however will be the “Deal”, which will be wheeled out whenever the opportunity allows. In that sense the Deal will become far less a shield to defend the members and far more a means for the government and the unions to police the members.

It’s quite likely that the deal will be faced by widespread opposition. But unless the government blunders into an all out confrontation with the public sector unions, it’s possible that the industrial mood might be dampened down for a period. Having said all that, Ireland is a small country with a limited internal market and a huge reliance on trade. If the eurozone goes into meltdown then all bets are off and it will become increasingly evident that the deal and “social partnership” isn’t worth the paper it’s written on.

So what about the working class, does the deal mean that social peace will break out? Far from it, the Croke Park deal will be a green light to the private sector employers who will see it as a defeat for the working class. While the bourgeois economists are suggesting that Ireland is out of recession, the fact is that the hangover from the slump still has a long way to go.

The evidence from the opinion polls indicates that the workers are starting to look toward the political front. This is no surprise, after all if the industrial front is blocked, then the workers will look for a way out in another direction. As we have explained elsewhere in Fightback the Labour Party is the main beneficiary of this process. Despite Eamon Gilmore’s prevarication and lack of a clear programme Labour is high in the polls. Increasingly, the anger of ordinary workers will begin to influence the party. But that process will be far more marked within the trade unions.

Thousands of workers have been drawn into activity over the last two years and many are drawing political conclusions. The role of the Marxists will be to engage with the most far sighted and militant sections of the youth and the working class and begin to lay the basis for a genuine Marxist tendency among the youth and in the unions and also within the Labour Party itself.