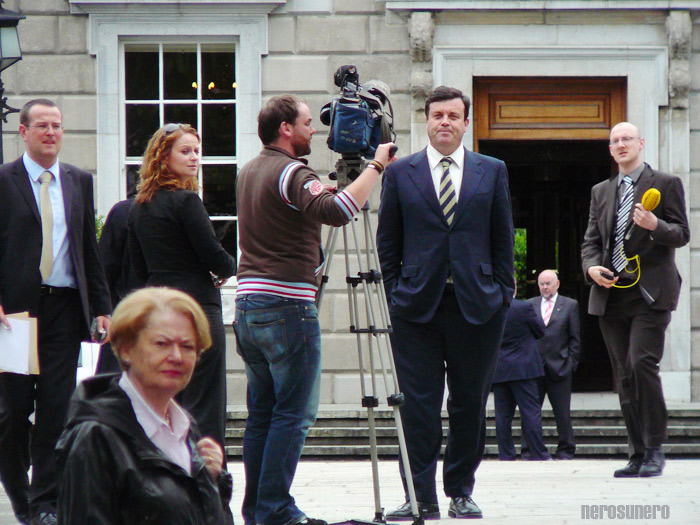 The last few days have seen a flurry of activity, the AIB bill has been presented, the polls show Labour miles ahead of both Fianna Fáil and Fine Gael. The economy is faltering and there is a four year budget plan on the way, although it is unlikely to be delivered to Leinster House via a cement lorry. But what are the prospects for the main parties and how do the trade union struggles over the last two years fit into the equation?

It’s been a bad week for Brian Lenihan, whether it was the announcement of the cost of the AIB bailout, Bill Clinton’s remarks that Ireland was toast, or chimp noises and shouts of “dive dive” courtesy of Citicorps. But that could be all about to change. Or at least that’s what the Great Irish School of Wishful Thinking would have us all believe.

It must be obvious to most people by now that Brian Cowen is in deep political trouble. He’s been under the spotlight for appearing to be the worse for wear on Good Morning Ireland, he has been told to clean his act up also. But perhaps the biggest problem for An Taoiseach is that 61% of the electorate want him to resign this side of the next general election. There is a good reason for this. As Bill Clinton famously remarked “It’s the economy, Stupid”. Just on cue the Finance Minister is preparing a four year budget plan, which can only mean more cuts, tax rises and misery.

The soldiers of destiny?

But who would stride forward to take up the leadership of the Soldiers of Destiny? Well, there seems to be only one candidate. Mr Brian Lenihan will pull a workable four year plan out of his hat, smite his foes and lead the party to office once again. For us, that seems like a very long odds bet. After all, while Brian Cowen has experience himself as a Finance Minister, the architect of the government’s economic policies and the pension levy, the cuts in pay, the emergency budgets, the slash and burn tactics of the past two years is none other than Mr Brian Lenihan. He is also well versed in the strategy of Wishful Thinking, as evidenced by his claims that the Irish economy was in fine shape a couple of weeks ago.

While Brian Cowen has quite rightly become unpopular because of the government’s programme and more recently he has come under the microscope personally, perhaps the explanation as to why Brian Lenihan is being touted as a new leader for Fianna Fáil is more to do with his not being Brian Cowen, than anything more substantial. We would argue that the opprobrium in which the government is held is going to be a far more important issue when it comes to the next election than which individual is leading the party.

With that in mind however, the government majority in the Dáil is so thin that the ousting of Cowen might in itself provoke a crisis that could bring down the coalition. Certainly holding off on the by-elections for as long as possible is a symptom of the extent of the problems that the coalition faces.

Labour’s rise in the polls

The economic and social perspectives for Ireland have been covered in a number of articles we have written recently, but suffice it to say, the state is in dire trouble. There is huge unemployment, emigration, an ongoing banking crisis and a faltering economy that is at risk of going back into recession. All this against a background of huge instability within the euro zone, the threat of a double dip recession on a world scale, stagnation in world trade and austerity measures and cuts in public spending that could last a generation.

As a rule the party in power loses support in a recession while in a boom they benefit from the emollient effect of economic growth. But, while the economy is decisive in the final analysis, there are all manner of social and political factors that determine the political development of the state. It seems that Fianna Fáil and the Greens are dead meat, but it would be wrong to assume that they will merely implode.

The most important factor in the situation at the present time is the role of the leadership of the Trade Unions and the Labour Party. There is a real significance in the fall of support for Enda Kenny and Fine Gael over the past few months. The tendency of the Fine Gael during the crisis has been to swing to the right. They have no real differences on the fundamental issues with Fianna Fáil. This is why they are reduced to making cheap remarks about Cowen appearing drunk on Good Morning Ireland.

The reasons why Labour is in the lead in the polls are many. Within the opposition Eamon Gilmore is faring far better than Enda Kenny, which explains the recent Fine Gael crisis. But there is far more to it than that. It is important to look at the development of the movement of the working class over the past two years as the background to the current situation. The Irish working class was forced into action because of the deep economic crisis and the attacks from the Fianna Fáil/Green Coalition. Hundreds of thousands marched through Dublin in February and again in November. There was a huge public sector strike at the end of last year and a whole flood of smaller demonstrations and strikes.

Throughout that time however the key strategy of David Begg and Peter McLoone was to find some sort of deal, any deal with the government. But, as we have pointed out throughout, there was an enormous gulf between what was possible during the Celtic Tiger years and what is possible in a slump. In basing themselves on an illusory perspective of social partnership, the trade union leaders attempted to rest on the movement of the public sector workers in particular, as a bargaining tool with the government. But as we explained at the time any deal that they came up with would be full of holes. Under the current economic conditions any deal would come under pressure from both the working class and the state.

That is precisely the experience of the debacle in December when the government showed the trade union leaders the door when they offered two weeks unpaid leave to offset the cuts. The Croke Park Deal, which we opposed in advance, was forced through ICTU despite being voted down by many unions. While many workers would have breathed a sigh of relief that there was a promise of no pay cuts for four years, this is at a tremendous cost.

Already the moratorium on pay cuts is under pressure and it is possible that there will be new attacks on it next May, when a review clause kicks in. But on the other hand the implementation of cuts, redeployments and reorganisations across the public sector has already generated opposition which will become more and more prevalent over time. But the signing of the deal certainly had an impact on the movement for a period. We predicted that a lull in the class struggle might follow the agreement.

Under conditions of crisis and where the movement of the working class is blocked on the industrial front, there is a tendency for workers to begin to move onto the political front. Although it has become fashionable on the left in Ireland to deny the possibility of the development of a left wing within the Labour Party, it is quite likely that the pressure on the Party will begin to see some differentiation on the basis of pressure from below.

The Irish Times reported recently that some 650 people joined Labour in September. Gilmore’s programme will need to be tested in practice before its limits become evident to the mass of workers. However, at a certain stage a left will develop. As Leon Trotsky explained, “It is wrong to mistake the first month of pregnancy for the ninth, but it is far worse to deny the act of conception in the first place”. The growth of support for Labour in the polls, particularly in Dublin and in terms of membership, is a sign of the shift going on among the mass of working people. It is important also to remember that Labour’s traditional third place in the polls means that in many areas workers have voted tactically in the past, this isn’t as much of an issue with Labour in front in the polls. So Labour’s support outside of Dublin will also tend to rise.

But the prospect of a Labour led coalition has certainly provoked some concern within the ruling class. We have reported recently on the attempt to cut Labour’s links with the unions. The bourgeois understand that a Labour led coalition would come under pressure from the working class. It would be in a very contradictory situation. Fine Gael would hold the balance of power and it would inevitably be a government of crisis. Under these conditions there would be a sharp differentiation within the party.

While one or two individuals like Joe Higgins standing outside the party might gain some support, the mass of workers will look towards Labour to solve their problems. The task for Marxists within the Labour Party and the trade unions will be to explain that these problems are the product of the senile decay of capitalism. That’s why we stand for the nationalisation of the banks and the big industries under democratic workers’ control and management as part of the socialist transformation of society.