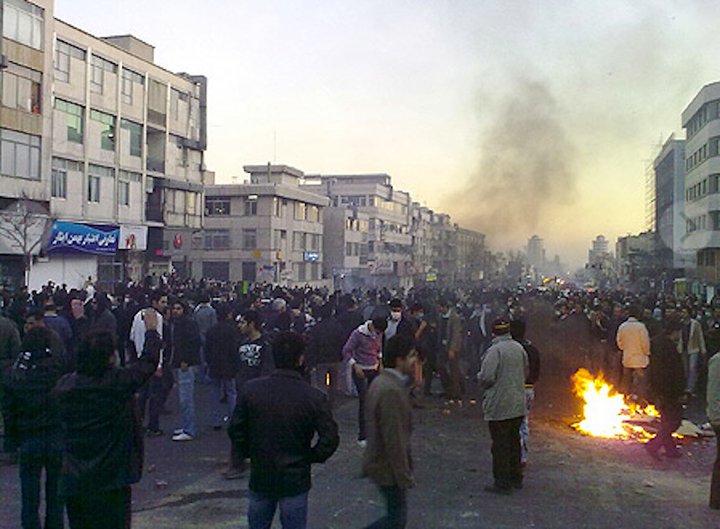 After almost a year of lull, the revolutionary movement that started after the presidential elections of 2009 seems to be resurfacing. This was displayed on Monday, February 14, when hundreds of thousands all over Iran poured out onto the streets responding to a call made by Reformist leaders MirhosseinMousavi and Mehdi Karroubi.

Because of the severe media blackout it has been difficult to put an exact figure on numbers participating in the marches. While the most cautious put the count at tens of thousands in Tehran, most reports from the city put the figure at hundreds of thousands.

“It appears that up to 350,000 people turned out on the streets of Tehran for the 25 Bahman protests. The reason so many people came out was the relative restraint shown by the security forces and the fact that mobile phones worked till 4pm – once the first few thousand people showed up, they were able to inform many others that the anti-riot cops and Basijis were not, in general, acting as viciously as had widely been feared.

“The Basijis mostly refrained from violently engaging with the protesters. I did see two people beaten to a pulp – one by Intel Ministry officers, the second by Sepah, the Islamic Revolutionary Guard Corps. Overall, people worked hard to stop beatings by the regime forces. Once in a while, the anti-riot police would try to disperse the crowd by firing tear gas.

“Traversing the city both by foot and on the rapid transit buses, crowds could be seen everywhere. Several thousand people walked from Imam Hossein Square toward Enghelab Square. This is the first time ever such a large crowd came from that direction – Imam Hossein Square is in the middle of a working class area. After being dispersed, the crowd walked peacefully on the sidewalks of Enghelab Avenue and some of the parallel roads.

“Following a lull for the Green Movement that lasted over a year, Monday's march has reinvigorated things tremendously. People were smiling in joy for the first time in a long while. Likewise, many Basijis and NAJA (state police) officers looked positively confused and crestfallen.”

Demonstrations were also reported in Mahshad, Isfahan, Arak, Shiraz, Rasht and many others, but it is still Tehran that is the centre of activities bringing hundreds of thousands out, while demonstrations in other cities probably never materialized to more than a few thousand.

The link between the Egyptian- and Tunisian revolutions and Iran was clear in many slogans chanted on the streets. In the last few weeks millions of eyes were on the revolutionary events in Tunisia and Egypt. This undoubtedly had a radicalising effect on the mass of people and especially the youth who formed the bulk of the demonstrations.

The increased radicalisation is visible in all reports from the demonstration. In the hundreds of reports and video clips published online, one rarely finds slogans that were not directed at overthrowing the supreme leader Khamenei. Common chants on the streets included:

“Khamenei should know this time he will be toppled” 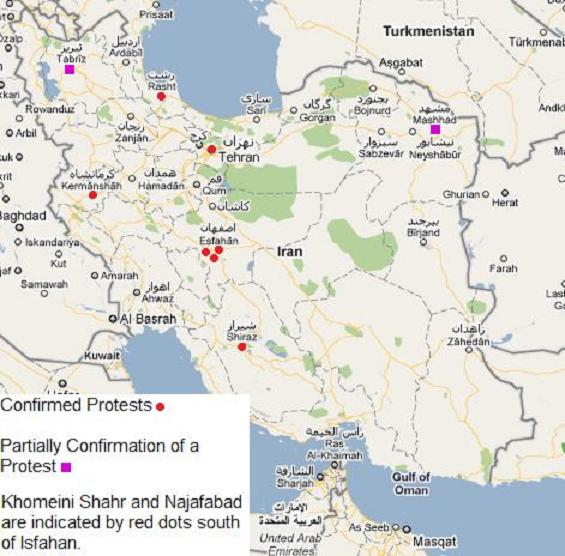 Map of protests It was clear that, the majority of people on the demonstration – which was called by Mousavi – were not there to support his neo-liberal policies or his call for “reforms” to simply change the face of the president. Contrary to what many on the left, and even some so-called Marxists believe, the youth on the streets were there to follow in the footsteps of the Tunisian and Egyptian people, and topple their dictator, that is the Supreme Leader – the embodiment of the Islamic Republic.

It is no accident that the march is happening at this particular juncture. After the impressive movement of 2009, the masses where left disoriented mainly because the only available leadership, Mirhossein Mousavi and co., refused to call for the overthrow of the regime. Their alternative was that of writing resolutions and open letters and at most calling for one day demonstrations. In fact they went so far as to heavily criticize the brave youth who on the day of Ashura (December 27, 2009) had taken on the armed forces and were calling for the fall of Khamenei on the streets of Tehran.

However, by showing which methods work and which don’t, the Arab masses have practically put Mousavi in a corner and exposed his methods as being worthless for achieving anything. At the same time the revolutionary upheaval in the Arab world has focussed the movement in Iran on what is most important of all: the fall of the dictator [read: regime].

Is there a revival of the movement?

The demonstration on the 14th was very significant and gave a glimpse of the deep contradictions that have piled up beneath the surface of Iranian society. Not only is the democratic problem far from solved, but living standards are falling at lightning speed.

As we have reported earlier, the regime has cut state subsidies for all basic goods such as flour. As a result, the price of flour has risen by forty times, petrol between four and seven times, gas five times and electricity and water by three times and bread four times. At the same time, frustration is rising on the streets. A 36 year old worker, displaying the mood in the class, told The Financial Times: “I swear these rich people have not even noticed the rise in prices of food and petrol or they don’t care about our sufferings because they can still patrol streets in their luxurious cars.” Along with the first layers to take part in the protests, now new and broader layers are being affected and are pushing for a revival of the revolutionary movement that started in 2009.

Although the demonstration on Monday, only mobilised the youth – the vanguard of the movement – and not the broader layers of the masses, it was still very large. At the same time the mood was much more radical, even for the standards of the vanguard. This situation is in many ways similar to Students Day – December 7, 2009 – when the Iranian youth filled the streets in a very tense and radicalised atmosphere. As we now know, this was a sign of what was to come on Ashura, where the people of Tehran staged an uprising and took power in several areas.

Whether this latest development will mirror that of last year will be seen in the next days and weeks. All the forces are pushing for a revival of the movement, but the top leadership is fighting against this with all its forces.

Apparently Mr.Mousavi has issued a statement congratulating the movement after February 14th, but congratulations won’t solve anything! People don’t risk their lives to be congratulated and asked to go back home. On the “25 Bahman” Facebook site, which was behind the call for a demonstration, several people were complaining about why there were no plans for further demonstrations. This new site, using the name “26 Bahman” to underline the need to continue the struggle, has quickly gathered several thousand members.

After the events in the Arab world it could not be clearer: One day demonstrations alone do not work! What is needed is a sustained campaign. A date must be set and announced for a first demonstration. In the run up to this, organizing committees must be set up in all the neighbourhoods and factories to broaden participation and also to organize defence. What we should also take on board is the enormous role the working class can play when they enter the arena with strike action. Thus the committees must also be used to prepare the ground for a general strike.

The movement also needs to be armed with a programme. On the one side there should be a clear stance on the need for democracy, freedom of speech, freedom for political prisoners and an end to despotism, etc. But the programme should also address the needs of the millions of people who are now being pushed into poverty by the neo-liberal policies of the regime. Demands for higher wages and reinstatement of the subsidies can draw in and activate layers that where hitherto unrepresented – especially the workers who can play a key role.

Mousavi was forced by the events in the Arab world to call the movement out again, but now he is trying to get it to withdraw as quickly as possible. Whether he will succeed or not this time round we do not know. However, what this demonstration clearly shows is that revolution is still vibrant, just below the very thin surface of society. It is merely waiting for an opportunity to erupt once again. The youth of Iran should be confident that if they develop a clear programme for change and prepare a serious plan for a sustained struggle, the masses of Iran will follow and the days of the regime will be numbered.