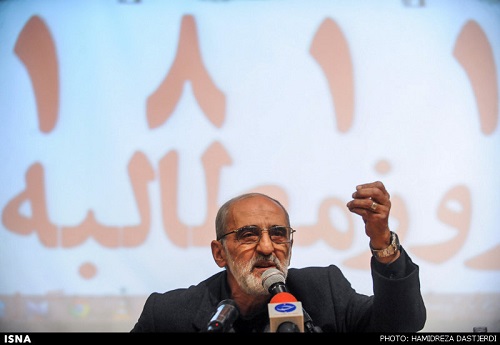 Hossein Shariatmadari, the powerful editor of the Iranian right-wing daily Keyhan, was disrupted time and time again as he tried to speak at Tehran University on 13 December. The hundreds of students gathered in the call would interrupt him with slogans such as "Leave, interrogator!", "Keyhan, Israel congratulations on your unity", "Death to reaction" "Shame on you, liar, leave the university". This open defiance of the students clearly shook Shariatmadari, who as a close confidant of Ayatollah Khamenei is one of the most reactionary voices of the regime.

A few days earlier on ‘Student day’ ( The anniversary of the death of 3 pro-democracy students killed in 1953 by the Pahlavi regime) Shariatmadari, along with several other conservatives were not allowed to speak at the universities as they traditionally have. Obviously, they complained that the government was sabotaging them, but the real reason was that the appearance of these hated people on university grounds was seen as a threat to stability. 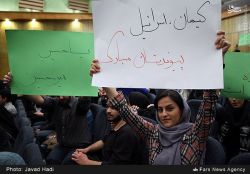 Sign to the right reads: "Keyhan, Israel - congratulations on your alliance"

sign to the left reads: "Ya Hossein, MirHossein"Even president Rouhani's appearance was moved to a small campus and steps were taken to control the students. Nevertheless, Rouhani's speech was interrupted several times by chants calling for the freeing of Mirhossen Mousavi, Mehdi Karroubi  and their spouses (all of who have been placed in house arrest after the revolutionary movement of 2009) as well as chants demanding that Rouhani fulfil the promises he gave when he was elected. Rouhani, who is a more intelligent representative of the ruling clique than Shariatmadari, attempted to appease the students by reiterating that he is still dedicated to fulfil his election promises.

sign to the left reads: "Dictatorship is temorary"All of these events are signs that the honeymoon period between Rouhani and the youth is coming to an end and that the youth are beginning to express themselves more and more boldly. The regime on the other hand is revealing its weakness in that it is forced to allow this. The lid cannot be kept on any more and they need to relieve the pressures and give some - at least cosmetic - concessions to the masses. In this context it is interesting that the above events were surprisingly honestly reported by the regime media. The regime is trying to appease the youth, but how long can this last? Hollow promises and concessions will have an effect, but that will not last forever.