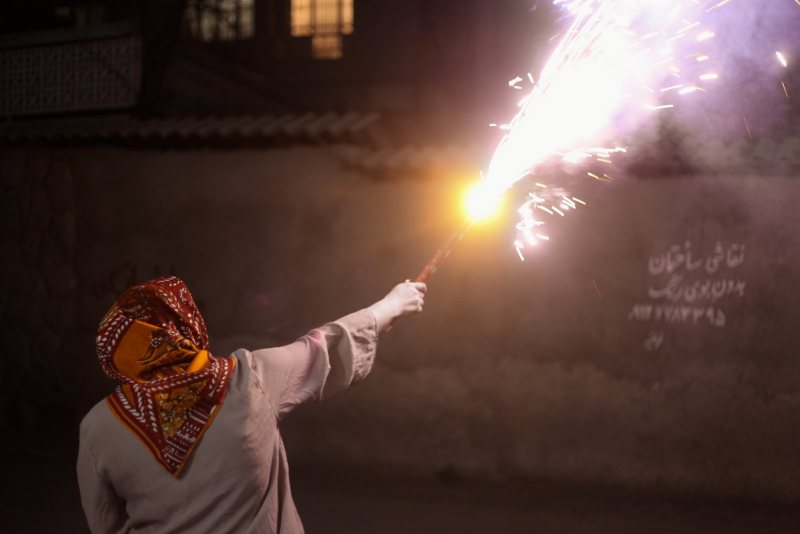 The first day of spring marks the beginning of the Iranian New Year, which is celebrated with bonfires, fireworks and dancing in the streets. This year, however, there was something new in the celebrations. The masses used the celebrations to express openly their hatred of the Islamic regime, in spite of attempt by the police to stop this.

Chaharshanbe Soori (also known as the Iranian Fire Festival) is one of the oldest, most revered traditions of Iranians. It takes place on the last Wednesday of every Iranian year (Iranian year begins when the spring begins, usually on March 21). On this day every year, thousands of Iranians come out and build fires in open spaces and jump over them.

This tradition has always been fiercely opposed by the Islamic Republic, not only because the regime tries to impose its own Islamic ideology on society but also to prevent such mass gatherings from taking place. This opposition on the part of the regime has, however, failed to stop hundreds of thousands of Iranians from coming out every year.

And further to the usual tradition of making fires and all kinds of firework displays and toys, dancing, celebrations and the breaking down of the normally accepted barriers between the male and female population has also been added to Chaharshanbe Soori in recent years. In the last few years we have seen that on this particular night, the government has no control over anything.

The author of this article can recall numerous occasions when an entire neighbourhood, filled with masses of people, has become a scene of music and dancing, with women shedding their Hijab (the Islamic veil which is compulsory in Iran) and dancing with young men. And whenever the police and Basij forces came to attempt to put a stop to all this, they were driven back and sent home by the people. So we were not exaggerating when we said that Chaharshanbe Soori, the day when people control the streets for a single night, could become a “dress-rehearsal for revolution”.

This year, however, Chaharshanbe Soori took place in a different atmosphere compared to previous years. It happened within the context of a massive revolution that started nine months ago and which has totally shaken Iranian society and the Islamic Republic to its foundations. But we should also add that it came in the immediate aftermath of the oppressive and reactionary atmosphere that the Islamic Republic had tried to put in place after 22 Bahman (the February protests on the anniversary of the 1979 revolution). That explains why they did their best to stop a revolutionary Chahrshanbe Soori from taking place.

It seems that the Islamic dinosaurs that are ruling over Iran have yet to understand that one could not force a revolutionary people to stay at home with stupid intimidations. They started their usual intimidating measures. The police starting issuing warnings, the sales of fireworks were banned and finally Mr. Dictator himself (Khamenei, the “Supreme Leader”) came on the scene and issued a fatwa (Islamic verdict or ruling) that the 3000-year tradition of Chaharshanbe Soori is void and of no value, both from a religious point of view and rationally(!).

Everybody understood that this was a direct threat against people coming out. What Mr. Dictator had failed to understand was that if his intimidations really amounted to anything, the revolutionary movement would never have started in Iran last year in the aftermath of the rigged elections, as he was the one who warned the people about coming out in his Friday sermon.

Not surprisingly, the people did not give a damn about the Dictator’s Fatwa. It ended up so badly for the regime that the police were forced to retreat and limit themselves to simply issuing a declaration asking people to celebrate Chaharshanbe Soori, yes, but “Please only do so in front of your houses”!

Chaharshanbe Soori 2010 went on to become an important day in the history of the new Iranian revolution. Hundreds of thousands came out to give a political colour to this day. Neighbourhoods all over Tehran, Tabriz, Mashhad, Sanandaj, Shiraz, Isfahan, Ahvaz, Abadan, Rasht, Babolsar, Karaj, Khoramabad, Borojerd, Hamedan, Ilam, Oromiyeh, Bookan, Sardasht, Shahin Shahr, Najaf Abad and a lot of other cities were filled with people of all ages.

The people not only took part in a massive, euphoric festival of music and dancing (which is itself considered an evil by the Islamic Republic), but also shouted political slogans like “Death to the Dictator” and “Release Political Prisoners”. They also had a new material for their fires this year, pictures of Khamenei, the great dictator, which were burned in huge numbers.

Many activists and advanced layers within the movement may have been hoping for the new Iranian Year to start without an Islamic Republic in power or for Chaharshanbe Soori to be a day like Ashoora, a day of direct conflict and battle of the people against the regime. They may have been disappointed. But we must understand the particular moment, keep up morale, see the perspectives and look forward.

It is true that the regime may have imposed a temporary setback and retreat on the movement (compared to the militant days of struggle like December 26). But the revolution lives on, the movement is alive and this is not hard to see. We have repeatedly said that Iran will never be the same again – after the events in June last year and things cannot go back to the situation before summer 2009.

Could anyone, for instance, have predicted a year ago that in Chahrshanbe Soori 2010 thousands would be burning pictures of Khamenei and shouting “Death to the Dictator”? Chahrshanbe Soori 2010 was indeed one of “Dictator-burning”. People did not have the opportunity for a revolutionary offensive against the government, but they confirmed on the eve of the New Year their strong intention to fight this regime and bring it down.

Perspectives for the New Year

The Iranian year of 1389 (2010-2011) started with massive hope and determination that the regime should fall. It is customary for thousands of Iranians who sit around their Haft sin tables at the moment of the New Year (the moment of the equinox, counted to its exact second) and make wishes about what they would like for the New Year. Naturally getting rid of the Islamic republic is the wish many of us have made every year, but this year this wish is a lot closer to becoming granted. Millions started their new year with this wish in mind and this time it comes with a determination to make it happen.

The Islamic Republic is besieged by a massive revolution that is counting its days. If the opposition had any genuine alternative and was one that was chosen by the people, it could determine the very death hour of the Islamic regime. Lack of leadership and organization in the current revolutionary movement is what has led people to use this or that day of significance to come onto the streets. This is the biggest current weakness of our movement and that is why the Islamic Republic is still breathing.

The best way to outline our perspectives is perhaps to look at those of the regime. The Supreme Dictator Khamenei declared the New Year’s Day to be a day of “Doubling efforts, doubling work”. This means they admit that they have to double their efforts to crush the revolution and, as they are keen to say themselves, “Put out the conspiracy”.

Of course, by “doubling work” they are referring to the economy which is in a dead-end and is one of the most fundamental root causes of the current revolution. And here we see what force the Dictator fears the most. It is the real force that does all the “work”, the same force that Mousavi has also been forced to recognise as a danger. It is the same force that serious bourgeois commentators warn about today: the working class and the working masses, that force that without which society could not function for a single day!

The working class must put itself at the head of society and become leader of the people’s movement. It should bring onto the scene all its massive might. What is required is a general strike, the classic tool of the working class in struggle. This would sign the death knell of the Islamic Republic. “For a General Strike to Overthrow the Islamic Republic and the formation of a Revolutionary Constituent Assembly!” This should top the slogan of Iranian communists and Marxists.

We have no doubt that the revolutionary movement will rise again in the New Year. Important and decisive days lie ahead. The year of 1388 (2009-2010) will be remembered as the year when the revolution began; a year of heroism of the Iranian people who fought tooth and nail against the Islamic Republic and its goons and mercenaries, the year of great martyrs of our revolutionary movement, the Year of Neda, Sohrab, Ashkan, Taraneh. This coming year, 1389, will be a year to continue the revolution and take important steps toward the final triumph.

The Iranian masses have shown that there is no limit to the sacrifices they are prepared to make. It is the duty of us Marxists and Communists to gather our forces and strengthen them, actively intervene in the current movement and finally work for the realization of a working class leadership over the current movement, which is the only way it can triumph.