This year’s presidential race in Iran was dramatically shaken this week by the news that Ali Akbar Hashemi Rafsanjani had announced his candidacy. Although Rafsanjani has fallen out of favour with the regime in recent years, it is quite possible that his bid could be successful. 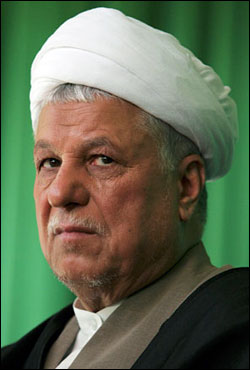 Ali Akbar Hashemi-RafsanjaniRafsanjani, who previously served as President from 1989 to 1997 and also unsuccessfully ran in the 2005 election, was not expected to run in this year’s race. One reason is age: if elected he would easily be the Islamic Republic’s oldest ever president, at 78. In addition, and perhaps more significantly, he has fallen out of favour with the leaders of the regime and all-powerful Supreme Leader Ali Khamenei. This goes back to 2005 when, after having lost the election to Ahmadinejad, he made allegations of electoral fraud. Relations were further soured in the aftermath of the 2009 election when Khamenei accused Rafsanjani of endorsing and helping the Green Movement and barred him from delivering Friday prayers sermons before later arresting two of his children. For the last few years, Rafsanjani, for so long an institution in the regime, has appeared to decline in importance to the point of obscurity, confirmed by him losing his position as chairman of the Assembly of Experts, a body that has the constitutional power to depose the Supreme Leader.

However, he has a realistic chance to become Iran’s next President. It is unlikely that the ageing Rafsanjani – who could seemingly enjoy a happy retirement from public service and sit on his billions – would run for the post if he did not believe this to be the case. This is especially so given that he said he would not enter the race if he did not have Khamenei’s blessing. After all, he is by far the most well-known candidate and many perceive he has the experience at a time when it is needed to reverse the country’s economic crisis within the capitalist system.

Rafsanjani is one of the most prominent capitalists in Iran. His fortune officially is estimated to be worth approximately $1.1 billion – although the real figure is much higher - making him easily one of the country’s richest men. Much of this has been attained through corruption and state-owned industry, especially oil. . In addition, the Azad University, by far the largest private university in the world and with assets worth more than 250 billion dollars, was established by his making. As President he espoused a free market policy of privatisation and even agreed with structural adjustment measures proposed by the World Bank and IMF.

It is undeniable that in a field of reactionary clerics and loyalists, Rafsanjani is considered by some to be a pro-reform candidate of the election. This is confirmed by former President Mohammed Khatami’s endorsement. Rafsanjani pursued a foreign policy of normalisation of relations with Europe and America during his presidential tenure. Finally, he has made several comments in recent years calling for tolerance and freedom of expression. Therefore, he will probably be the favourite for those looking for a figure who they perceive is standing in opposition to both Khamenei and Ahmadinejad, in much the same way Mousavi was in 2009.

However this should not hide the fact that ultimately, Rafsanjani is one of the most loyal and central figures of the Islamic regime. Rafsanjani was one of the key members of the clique that assumed power in 1979, and was appointed by Khomeini as the de facto chief of the Iranian military through the 1980s war with Iraq. His presidency, amongst other things, was marked by many instances of severe repression of workers and youth, such as the infamous “chain murders” where hundreds of dissidents and intellectuals were assassinated between 1988 and 1998.

Throughout his long period of service he has been a loyal spokesman for the regime, even when not President; for example, in 1999 he praised the government’s repression in crushing student protests. Most significantly, before 2005 he had enjoyed an extremely fruitful relationship with Khamenei, and was instrumental in the latter’s ascendancy to the position of Supreme Leader in 1989.

Moreover, the regime could well need Rafsanjani to help ensure its own survival. Khamenei now has little genuine social basis and his legitimacy has been battered by the events in aftermath of the 2009 election as well as by the growing economic crisis. Rafsanjani offers a chance to reach out to wider sections of society in a safe way that would be unlikely to see a repeat of the Green Movement. Furthermore, at a time when sanctions are crippling the currency, Khamenei might look to Rafsanjani’s experience in negotiations with the West to ease the situation and prevent an eruption of mass protest.

Khamenei has shown himself to be a pragmatist before. The demands of circumstances mean that he is not in a position to excessively flaunt his power. It is therefore conceivable that he will forgive Rafsanjani for recent comments and actions, seeing it as a necessary evil to secure self-preservation.