Since the mass demonstration organised by the opposition on Monday, a tense mood has gripped the streets of Tehran. The youth has been mobilised and great pressure has been mounting for the opposition to take further action. This has led to the call from an umbrella organization of the Reformist parties to stage a demonstration on Sunday, February 20, in memory of the two protestors who were killed on the demonstration last Monday. This could tip the scales and fully revive the revolutionary mass movement of 2009. 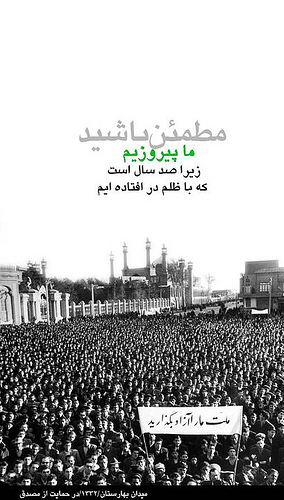 "Be confident - We will be victorious" The shockwaves from the Arab revolution have broken the fragile "calm" on the surface of Iranian society over the last year. The marvellous movement of the Arab masses has exposed the impotence of the methods of Iranian “opposition” leaders Mirhossein Mousavi and Mehdi Karroubi’s of writing resolutions and open letters as a means of pushing for change. That is why these gentlemen were forced to call a demonstration last Monday in support of the Egyptian and Tunisian revolutions.

From the beginning all forces knew that this was not going to be any normal demonstration. What was at stake was not the Tunisian or Egyptian revolutions, but the future of the Iranian revolution itself. The regime, while underestimating the strength of the movement, was hoping for a low turnout so it could use it as an excuse to isolate and crush the movement. The youth on the other hand were hoping to use the momentum to reopen the period of revolutionary struggle.

On the day of the demonstration hundreds of thousands defied the threat of a heavy clampdown and came out on the streets. In a matter of hours everything was changed. No one could believe what they saw. Hamid Farrokhnia, a labour journalist reporting from the demonstration captured the mood when he wrote: “People were smiling in joy for the first time in a long while. Likewise, many Basijis and NAJA (state police) officers looked positively confused and crestfallen.”

A wait-and-see mood in Tehran

The success of the demonstration came as a shock for everyone! The Financial Times rightly described it as “far exceeding all expectations”. The regime was completely taken aback while the youth were overtaken by a sense of nervous relief. Many couldn’t believe that the movement still had the strength to gather hundreds of thousands.

Many people were pushing for the new demonstrations on Monday and Tuesday, but no one called one. A nervous and tense atmosphere spread throughout Tehran. Like two giants about to engage in fierce struggle the revolution and counter-revolution were eying each other up, watching every single move the other made.

The masses were pushing for further action because they understood that retreat was not an option, but they were not sure of how, when, and where it should be or who would call it. The regime, humiliated and scared, did not know how to act. It tried spreading terror, by staging a demonstration in parliament, where parliamentarians demanded the execution of Mousavi and Karroubi. At the same time they arrested hundreds of honest and revolutionary youth and also many leaders of the Reformist parties. But all their threats and terror didn’t amount to much in the end.

The masses had sensed blood and they kept pushing for action, although still no-one called it. The uncertain nervous mood was also present at the funeral ceremony of one of the demonstrators, Sane Jaleh, who was killed during the February 14 demonstration. The state, fearing that the demonstration could turn into a mass rally, tried to sow confusion by spreading the idea that Sane (a devoted Green activist) was in fact a staunch supporter of the regime and that his funeral should therefore be attended by regime supporters.

Thus a strange scene met the participants at the funeral where Basijis and opposition supporters tried to attend the ceremony. But even though the state mobilized massively it was still disoriented. This was very clear from the following report:

“I was there [at Saneh Jaleh's funeral service]. There were two or three thousand Basijis, and our group was about a 100 or 200 maximum. They trampled on Saneh's blood. They did nothing but engage in insults at his service. They got into fights amongst themselves three or four times about what to do with the kids (to beat them or not, to let them go or not)…” (Tehran bureau)

In the end most anti-government demonstrators were not let in and many were beaten up, but again the regime was not able to decisively push back the youth who were still pressing forward in the understanding that it was vital to use the momentum and to go on to the offensive.

This drive has now forced the leaders of the reformist organizations to call for demonstrations all over Iran on Sunday, February 20, to honour the two martyrs of the February 14 demonstration. This demonstration, if successful, will be the straw that tips the scales and fully revives the revolutionary movement of the Iranian masses.

Once again on the question of the leadership

The fact that the reformist organizations have called the demonstrations shows the immense pressure that is mounting from below. However, even when all the people of Iran are in support of it, to merely announce a demonstration is not going to guarantee its success.

In revolutions, as in wars, a good leadership is imperative to realize the potential of one’s troops. A general that only calls for attack and does not have a plan for how, when and where to attack is useless. We have already seen that the so-called leaders of the green movement do not do anything to ensure the success of the demonstrations that they call. This was displayed most vividly on the anniversary of the elections last June, when Mousavi and Karroubi, a few days prior to the demonstration called it off after months of preparations. The result was that the vanguard of the movement, the most dedicated elements, were isolated on the streets without the protection of the masses and thus put in great danger of being killed.

Again on Quds Day, these people issued a call for all the masses to come onto the streets, although it was clear by then that only the vanguard would be coming out. But even last monday it was clear to all that there was no plan for assuring demonstrations big enough to consolidate the movement and to minimize casualties.

This time the movement is in a very critical condition. There is a constant shifting between nervous doubt caused by state propaganda on the one hand and optimism on the other based on their own experiences, as people await the next step. This means that all means must be used to ensure that momentum is not lost. And because the top reformists will not do this it is the duty of the youth to take up the task.

There is a need for a concrete plan on how to mobilize a mass of people big enough to sustain the pressure of the armed forces. A campaign must be waged in all the neighbourhoods where organizing committees must be set up. Also clear demands and slogans must be formulated, such as the overthrow of the regime, freedom of speech, the release of all political prisoners, higher wages and reinstatement of the subsidies on basic goods. Also it is of utmost importance to spread the movement to the factories and workshops and prepare for a general strike.

The next days are going to be critical and there is no time to waste! All the forces of the revolution must be vigilant and engage in tireless mobilization and organisation. We must not waste this great opportunity to revive the revolutionary movement in all the neighbourhoods, factories and universities.

Iranian society is moving quickly towards a boiling point and the masses are ready to move. Once that happens, nothing will be able to stop them. The Iranian regime is a vicious animal, but it is running low on reserves. Once the movement begins to move and drags all layers of society behind it, the regime will collapse like a house without any support pillars.

[NOTE: After these lines were written it became clear that Mirhossein Mousavi and his wife are missing. They might very well be in the hands of the security forces. This action though will be only worsen things for the regime who will be met with even more fury and thirst for revenge by the masses, who understand that this is not an attack against Mousavi as a person, but against the movement of the people. If Mousavi is hurt it could whip up a mass movement that would cause the downfall of the regime.]