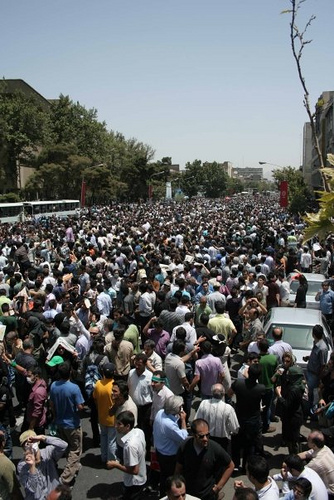 Last week we witnessed a public spectacle in Iran, which revealed the resilience of the mass movement, but most importantly it brought out into the open the serious divisions at the top of the regime, the precursor of an even deeper crisis. What is required now is for the working class to step in as a force that can lead the whole movement and bring down the regime.

On Friday another nail was put in the coffin of the Islamic Republic when prominent cleric Rafsanjani's public criticism of the regime's dealing with the elections sparked another massive protest on the streets of Tehran.

Ayatollah Rafsanjani, former president of Iran, came out in public with his views on the elections on Friday. Although his sympathies for the opposition were known before, his public statement in favour of the opposition sparked massive protests. The streets of Iran that had been quiet for a week, once more came alive with hundreds of thousands of protesters.

Rafsanjani's speech, although correctly interpreted as being pro-reform, hardly contained any radical demands. He did call for political prisoners to be released and questioned the results. Yet, it was a far cry from the demands that are being put forward by the rank-and-file of the movement. “Death to the dictator”, which has become one of the popular slogans of the students and workers on the streets of Teheran, leaves little room for Khamenei to continue as a leader.

The whole speech of Rafsanjani was directed towards the leaders of the Islamic Republic:

The unity he is talking about is clearly the unity of the state bureaucracy, the political and economical elite in which Rafsanjani plays a central role. His own wealth and status is in jeopardy. The hard-liners were already moving against him before the election. His support for Mousavi has only deepened their dislike of him. Rafsanjani is fighting for his survival and it seems best served by continuing to support the efforts of the opposition.

Unlike the masses of youth and workers that are protesting on the streets, however, Rafsanjani's interests are completely tied up with the Islamic Republic that he is desperately trying to save. His message to the clerical/political establishment is: reform or you will be crushed. He argues that protests should be allowed, in order for people to continue to face the-choice-that-is-no-choice between the “hard-liners” and the “reformists”.

“If we violate the law, then there will be no boundaries left. We should raise our issues in the context of the law and find solutions for them within the framework of the law. We should accept whatever the law says and if there are some people who have problems with some laws, they should wait until those laws are corrected.” 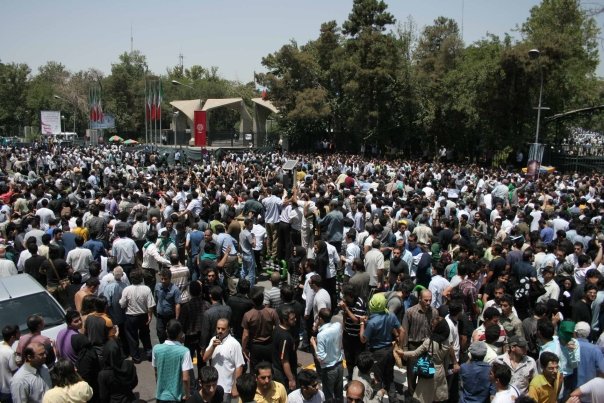 Demonstration in Tehran, July 17. Photo by .faramarz Rafsanjani's message to the rank-and-file of the opposition is to remain within the legal framework of the Islamic Republic. He asks the workers and youth to respect the legal apparatus that protects the basiji and tortures and imprisons trade unionists and protesters. Almost every single demonstration since the election has been illegal and the basiji and the police have made it abundantly clear on whose side the law is. Yet, it is clear that Rafsanjani wants to preserve, not overthrow the Islamic Republic.

Khatami echoes the sentiment of Rafsanjani, in his call for a referendum on the elections:

“I state openly that reliance upon the people's vote and the staging of a legal referendum is the only way for the system to emerge from the current crisis.”

Khamanei on Monday put out a rather different statement:

“The political elite should maintain great vigilance because they currently face a significant challenge; their failure to rise to this challenge will lead to their collapse.”

Khamanei's message is: reform and you will be crushed. He also warned that disturbing security is “the biggest vice” - a reference to the revolutionary potential of the movement. Thus, the impasse of the Islamic Republic continues. Yet, the ground appears to be shifting towards the reformers.

Repression did not lead to the crushing of the protests. Rather the brutality which the peaceful protests encountered heightened the anger of the people. The protests were smaller but they became more bitter and the determination of the protesters to stand and fight the security forces grew. 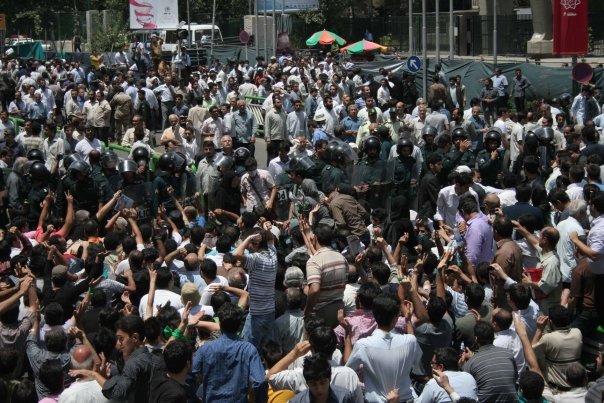 Demonstration in Tehran, July 17. Photo by .faramarz Twelve days ago we wrote:

“The numbers were not as big as they were a few weeks ago. But the most striking feature of this movement is that is happening at all. After all the brutal repression, the savage beatings, the shooting and arrests, the fact that thousands of people are prepared to come out and protest tells us something very significant: that people are beginning to lose their fear.” (Iran: The defiance continues)

On Monday last week, a wave of strikes broke out in Kurdistan with widespread protests, particularly in Saqez. This was at least the second such movement in the Kurdish areas.

The masses, far from being deterred by the repression are increasingly openly showing their defiance. They are losing their fear of the repressive apparatus of the state. This is the background to what happened last Friday.

The rift in the ruling elite grows with the confidence of the masses. The failure of repression has strengthened the reformist wing, allowing a prominent reformer, Rafsanjani, to hold Friday prayers. The Assembly of Qom Seminary Scholars and Researchers also came out against the government last week. This further emboldens the masses, who, rightly, see the days of the regime as being numbered. 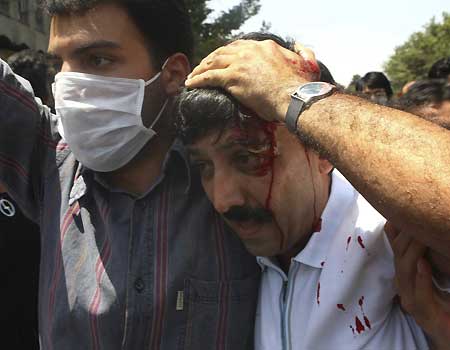 Injured protester outside of Tehran University, July 17. Photo by .faramarz The people came out on Friday en masse. Emboldened by Rafsanjani's speech, they proceeded to once again take over the streets of Teheran and send the basiji and police running. For a while it even seemed as though the state television channel might be taken over as protesters moved towards the building undeterred by the security forces. Reports came in during Friday of police refusing to fight the protesters and disobeying orders. 36 army officers, including two generals, were arrested in the morning before Rafsanjani's sermon because they had planned to attend the sermon in uniform – showing the discontent with the regime that is brewing within the ranks of the army itself. For a long time, the weakness of the regime has been obvious in its use of the basiji instead of the army or the police to do the dirty work. Even the Revolutionary Guard seems to be unreliable and have been used selectively.

The reformers have now been given a new lease on life. They could topple the regime but they are hesitating and are unwilling to take the final step. That is because they are part and parcel of this same regime. Their main concern is to hold back the movement, control it, and channel it.

The logic of the situation is the same as that which existed in 1979. The entry of the workers onto the arena would transform the situation and it would be the death knell for the regime. Yet, the reformists cling to the Islamic Republic, unwilling to break with it. Instead they try one peculiar protest tactic after another: the latest is to use massive amounts of electricity in order to cause black-outs – a sort of inverse consumer boycott. Clearly, this will lead nowhere and is a step backwards.

Now, the opposition is demanding a referendum on the elections. This is not what is required. In any case, how can anyone guarantee that such a referendum would be more democratic than the recent elections? It would be a step backward even from the point of view of previous demands for new elections. It is clearly being raised as a means of channelling the movement and bringing it back under control. 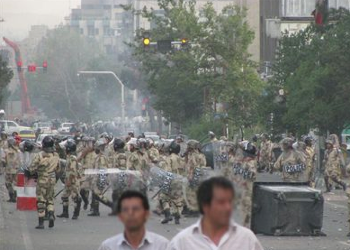 Security forces at the demonstration on July 21. Photo by .faramarz This Tuesday, on the anniversary of the July 21, 1952 Pro-Mossadeq uprising, when 15,000 protesters marched through Tehran, it was reported that the mainly women demonstrators chanted slogans in favour of Mossadegh, the former president that was overthrown by the CIA in 1953 when he attempted to nationalize the oil. So much for the movement being a CIA coup! This clearly shows in what direction the movement is going.

What is required is a decisive intervention of the working class. The workers must now take the lead and organise discussions that would lead to the calling of a general strike. In the Kurdish areas of Iran strikes have already taken place. Such strikes need to spread to the whole of Iran and build up towards a general strike. Such a movement would finish the regime. What brought down the hated Shah regime was in fact the mass mobilisation of the working class. Once the workers moved the regime was finished.

So far, as an organised force, the workers have not intervened. The workers must come forward with their demands on such issues as payment of all unpaid wages, jobs, trade union rights, etc., but also on the democratic demands of the movement. They should put themselves at the head of the movement with democratic demands, including the demand for the calling of a revolutionary constituent assembly, while at the same time organising their own clandestine workers’ committees. These would eventually lead to the revival of the shoras (workers' action committees or soviets), which we saw in the late 1970s. Only this will finally bring to an end the hated regime of the mullahs.

Down with Ahmadinejad and Khamenei!

Videos (all from Friday 17th)

Tear gas fired into the crowd