On countless occasions since June 2009, we have seen the potential power of the Iranian people, with numerous protests that have brought hundreds of thousands onto the streets of Tehran and other cities across the country. The pinnacle of the movement so far was the two-day long protest during Ashura in late December 2009, when millions directly challenged the power of the state, occupying police stations and taking control of central areas of the capital. At this point it looked like the Iranian regime was on the verge of collapse.

In the absence of any leadership to provide a revolutionary strategy, however, the movement has died down. For many months, thousands of people had put their lives at risk by being active on the streets. But because they perceived that their efforts were having little effect, and came at the price of blood, they saw no point in continuing. Thus, we find ourselves looking at an apparent lull in the Iranian revolution.

This apparent lull, however, presents the opportunity for workers and youths to build the necessary means by which the workers’ movement can combine with the Green Movement. We should encourage the creation of study groups, whereby workers and youth can draw the lessons from the ideas of Marxism. We should also at this time aim towards building a network of workers’ committees, capable of organising a uniformed general strike. 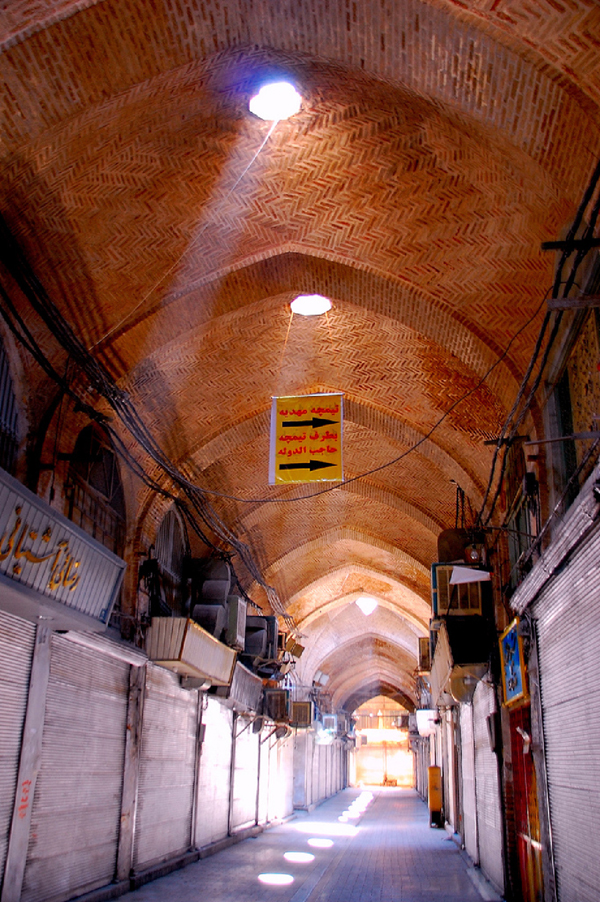 That the state could crumble faced with such an event is made clear by the Tehran Bazaar strike that took place in July. The bazaaris closed their shops for two weeks because of the state’s plan to increase sales tax by 70%. Similar strikes spread to the bazaars of Hamedan, Tabriz and Isfahan soon after. The Tehran bazaar contributes to a third of Iran’s whole retail sector, and so consequently the state was left with no option but to succumb to the bazaaris’ demands. Significantly, even when the state proposed to lower the increase in sales tax to 15%, the strike continued. The fact that this should come just two years after the only other Bazaar strike since the 1979 revolution suggests there is a growing consciousness that the government is on its knees and cannot afford to suffer more economic turmoil. The Tehran Bazaar has always been thought of as stronghold of political and social conservatism, and was crucial in the 1979 revolution; thus the latest developments are hugely significant.

We cannot expect the country’s bazaars to lead the Iranian revolution. The regime can still draw on the support from senior bazaaris. And after all, the bazaaris are small, individual shop owners, representing a section of the Iranian petit-bourgeoisie. To be truly successful, the Iranian revolution must be based upon a movement of the workers and youth. However, the revolution must win over the support of a decisive layer of the middle-classes also, and the bazaaris can play an important role as a catalyst to a wider movement. However, the main significance of the recent strike lays not so much in what it reveals about the Bazaar’s capabilities, but in how it exposes the government’s weakness. It has highlighted why mass strike action at this point in time is much easier to organise. Two reasons explain why the regime is currently so frail: its power struggle, and the economy.

Since the election fraud last year, a clear rift has developed between ‘Supreme Leader’ Khamenei and President Ahmadinejad. This has revealed itself in a series of instances where one of either has made decisions against the will of the other. For example, last year Khamenei vetoed the President’s appointment of Esfandiar Rahim Mashaei as Vice-President, which was met with a letter of defiance from Ahmadinejad. Similarly, Ahmadinejad sacked the hard-line Minister of Intelligence Ejei, who was reporting to Khamenei without the President’s permission. Countless other manoeuvres have occurred, displaying a clear divide between the hard-line clerics within the government, and the President with the Revolutionary Guards. But perhaps the most telling evidence of this deepening rift can be found in two recent developments seen last week.

One of these occurred when Ahmadinejad and the cabinet met with Khamenei. Ahmadinejad presented a list of his government’s ‘achievements’, all of which were firmly rebuked by the Supreme Leader – something that is without precedent.

Last week also saw Ahmadinejad’s attempt to take control of diplomacy by appointing four ‘special representatives’ from his cabinet, representing four different international regions, effectively bypassing Khamenei and the Foreign Ministry. Consequently, 120 hardliners wrote a letter to the President, condemning the move as unconstitutional and accusing him of being against the Islamic regime, demanding he reverse the decision. The fact that Ahmadinejad left the University of Tehran immediately after his speech on Quds day – a day dedicated to the people of Palestine – and did not stay for the prayers led by hardliner Ahmad Khatami only goes to support the argument that he truly does oppose the established theocracy.

This power struggle can only help the Green Movement, because a lack of unity at the top means both factions are attempting to win the support of the people to varying degrees, minimising counter-revolutionary repression. It means it is the perfect opportunity to engage in building the means by which the revolution can progress.

Moreover, the current economic situation means that the country is a breeding ground for mass strike action. Iran was in recession even before the global economic crisis. The annual GDP growth rate is too low to keep up with the number of new labour force entrants each year. Inflation is as high as 30%. Due to large numbers of imports in the last five years, factories across the country are facing shutdowns and bankruptcy, contributing to an official unemployment rate of 15%. Compounding all of this is the decision to cut state subsidies. This all means there is a ripe mood for industrial action.

Mass strikes at this time would destroy the regime, particularly as anything between 50 to 80% of the economy is state-owned, meaning that most opposition would be directed not at individual employers, but at the state itself. A general strike in late 1978 was the decisive element in the collapse of the Shah’s regime, and the same would apply today.

The government succumbed to the Tehran Bazaar’s demands, and yet the Bazaar’s contribution to the economy pales in comparison to the importance of oil. The oil and gas industries constitute 60% of the Iranian economy. It was the oil strike in 1978 that dealt the largest blow to the Shah’s government, costing $50 million a day. So although we should work towards a general strike, concentrating on building opposition within the National Iranian Oil Company (NIOC) should be the top priority.

The regime is conscious of the importance of the NIOC, and so there is high security at all oil industry sites. But industrial action within the oil industry is not impossible, as shown by events in October 2000. Plans to privatise the National Iranian Drilling Company (NIDC), a subsidiary of the NIOC, were met with strike action by the NIDC workers. The reliance of the state on the oil industry is underlined by the fact that the state scrapped plans for privatisation just a few months later, and opened an inquiry into the planned privatisations of 20 other NIOC subsidiaries! Industrial action has been seen before in the oil industry, and it must be seen again!

Now is the time to build up revolutionary consciousness within the workplaces – something that the Green Movement has lacked hitherto. We must work towards creating strike committees across the country, so that a general strike can be organised. There are already the existing trade unions like the Vahed bus drivers and Haft Tapeh Sugar Cane workers, as well as existing labour committees within the Cooperation Council of Labour Organisations and Activists. But we must all learn from the mistakes of 1979, when the shoras (workers’ committees) were not connected into a wider network, serving only individual workplaces. Consequently, workers did not take control of the state, only of their separate factories temporarily.

There needs to be a network of workers’ committees to ensure that the Iranian revolution results in a healthy workers’ state, and is not hijacked by a counter-revolutionary leadership, as happened in 1979 when the theocracy took power after a mass movement of the working class had brought down the regime of the Shah. This was able to happen because of the power vacuum that was left behind when the Tudeh (Communist) Party had shown itself to be unwilling to provide any leadership. All of this further emphasises the need for a revolutionary leadership to the current movement.

The revolution in Iran seems to be in a lull. But that is part of the nature of revolution. Revolutions are not one-act dramas. In any revolutionary movement there will be periods of ebb and periods of flow. And whilst people are not out on the streets and there is apparent calm, organising the necessary means by which the workers movement combines with the Green Movement is more possible. Once this happens, the regime will certainly draw its last breath!