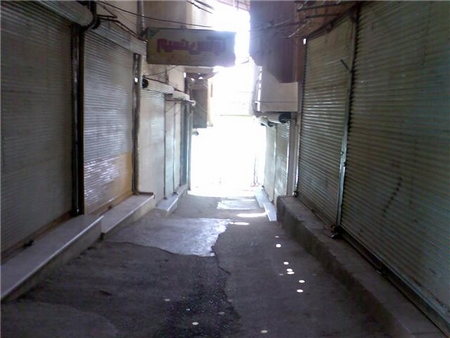 As we reported earlier several Kurdish based leftist organisations called for a general strike in Iranian Kurdistan on May 13 to protest the sudden execution of 5 Kurdish labour activists. The executions, as a part of a general wave of oppression by the Tehran regime, was clearly intended to use the temporary lull in the mass movement to intimidate the Iranian masses and get the upper hand in the revolutionary struggles that have been developing the since last June. But as seen many times before in times of revolution, the whip of the counter-revolution can serve to arouse the masses more than pushing them back.

This is exactly what happened in Kurdistan on May 13. New York Times reports:

Iranian Kurds staged one of their largest strikes in recent years, closing shops and bazaars in nearly all Sunni Kurdish cities and towns in western Iran to protest the executions of five people, including four Kurdish activists, on Sunday, according to opposition Web sites and witnesses.

The strike was the largest in Kurdish areas since 2005, when another Kurdish activist was shot and killed by security forces.

Many analysts and opposition figures interpreted the executions on Sunday as a warning that the government would not tolerate protests next month on the election’s first anniversary.

The government said the five people who had been executed had been found guilty of carrying out fatal bomb attacks.

Nearly all the shops were closed in Sanandaj, the capital of Kurdistan Province, said a witness who spoke on the condition of anonymity for fear of being arrested. “The city is deserted,” he said. “People have stayed home and the entire bazaar is closed.”

The shops and bazaars in several other Kurdish cities, including Bukan, Oshnavieh and Marivan, were also closed, an opposition Web site, Jaras, reported. Pictures and videos posted on Web sites appeared to support those claims.

Clashes with security forces in several towns were reported, but those accounts could not be independently confirmed.

“This is the first time in the past 30 years that we see such a solidarity between the Kurds and people in other parts of the country,” said a Kurdish activist, Saman Rasoulpour, who left Iran and is in Sweden."

The proud people of Kurdistan with long traditions of struggle staged an impressive act of mass defiance for 24 hours.

The strike also shows a glimpse of the ferment brewing in not only the masses in Tehran, but also the national minorities - the Arabs, Afghans, Bbaloochis etc. - who are all living under massive oppression. The oppressed nationalities and the "green" movement are natural allies - the unity of these are a prerequisite for the victory of all against the military dictatorship.

The success of the general strike (or actually all-out strike as it was called) lies in the fact that it took place without the regime being able to do anything about it. Although the Kurdish areas are thinly populated, the strike was a setback for the regime. Instead of intimidating the people the regime was humiliated in front of the whole nation.

This is a very significant development. Behind the fog of appearance of calm new eruptions are being prepared on a higher level than anything we have witnessed in the past year. The strike and its success is proof for hundreds of thousands that it is possible to organize a general strike. If this happens, the days of the regime will be numbered. At the same time, it would completely change the situation bringing the mighty working class to the forefront of the movement just like in -79 when the Shah was toppled on the basis of the general strike.

The task now must be to prepare for such an action. Committees/shoras must be set up in every neighbourhood, and factory preparing for a national general strike. For the general strike to be as effective and powerful as possible there has to be a clear program consisting of demands such as freeing of all political prisoners, no more executions, equal rights for men and women, a living wage, end of all temporary/blank contracts and of course the complete right for self-determination of all oppressed nationalities.

But it is also necessary to clearly express that these demands can only be achieved if they are a part of the struggle for complete overthrow of the regime, who is not in a position to give any concessions, and the convening of a revolutionary constituent assembly.

On this basis the general strike would draw in the vast mass of Iranian society, who are all in some way suppressed by the totalitarian regime. If this happens the days of the rule of the privileged are close to giving way to the days of mass rule.