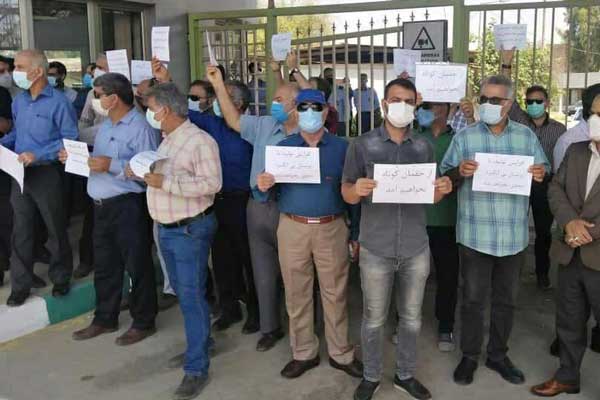 Protests and strikes are now spreading across every sector of the economy in Iran. There have been at least 100 strikes and protests over the course of the past few months. While not yet on the scale that we have seen in the recent past, pensioners and workers receiving social security have also held weekly protests across the country.

These protests were organised with the support of independent trade unions, with whom protestors issued common demands and statements. There exists an enormous potential to unify the movement, after years of strikes and protests across the country.

Most recently, on 15 May, pensioners and workers on social security held protests in every major city, including: Teheran, Tabriz, Isfahan, Kermanshah, Shousha, Khorramabad and Shiraz. The protesters are demanding that pensions and grants be raised in line with inflation, as guaranteed by the regime’s own legislation. But the protests – ongoing since December – and have been ignored, or else met with violence and arrests by the regime. This has further politicised the slogans being raised in the last two weeks, including, “All imprisoned workers must be released!” and, “We will not vote anymore, we hear only lies!” in reference to upcoming presidential elections.

These protests have become a focal point for the independent trade unions who have brought their own demands for a raise in the minimum wage, and overall wages, in line with inflation. On 1 May, international workers’ day, protests were held nationwide by independent workers’ organisations and pensioners’ organisations. The organisers issued a common statement, laying the blame for the social crisis and the COVID-19 pandemic at the door of capitalism itself. The statement further explains that, “In Iran, the solution lies in the class struggle, as it does in every part of the world,” and that, “the liberation of the working class will only by possible at the hands of the workers themselves!” It went on to explain that the current situation in Iran demands the “formation of our own independent organisations, free from capital’s agents and their deceptive and criminal plans in defence of capitalism.”

Such advanced conclusions are the result of months of strike action and protests, and potentially pose an enormous threat to the regime-led workers’ organisations.

The victory of Haft Tappeh and the struggle for workers’ control

On 8 May, following years of strikes and protests, the Haft Tappeh Sugar plantation was renationalised. This is an enormous victory for the working class. Without a doubt, this victory will imbue the entire Iranian working class with confidence. For years, the independent trade union of Haft Tappeh has been at the forefront of the class struggle, calling upon all Iranian workers to unite around its own struggle, whilst supporting strikes and protests across Iran. This was precisely the key to their success. They based themselves on the strength of the Iranian working class. They never placed themselves at the whim of the capitalist criminals, or of the agents of the regime in the form of the Islamic workers’ organisations.

While this is an enormous victory, the Haft Tappeh union explained that their struggle to realise their main demand continues: “[For] Haft Tappeh Company to be put under the supervision of the Workers’ Council”. The state sector is treated like private property with rampant nepotism and corruption. The workers of Haft Tappeh aren’t alone in the struggle against privatisations and corruption within the state sector. Oil workers, railway workers, and automobile workers, among others, are also engaged in such struggles.

For example, the government was forced to renationalise Transverse (the largest railway construction and maintenance company in Iran), which employs 7,000 workers, following strikes in November and the exposure of the blatant corruption of its previous owner. Nevertheless, even after renationalisation, workers continue to go months without pay, while sporadic strikes and protests continue. Meanwhile, the state hasn’t even appointed a board of directors or a CEO, with rumours flying that they intend to reprivatise the company.

It is clear that whether companies are private or public, the same parasitic capitalist class remains in power. Their only interest is self-enrichment through thievery and exploitation, a price the Iranian working class are made to bear. The Haft Tappeh union’s demand for workers’ control shows a way forward and must become universal.

Iran: a crisis without end 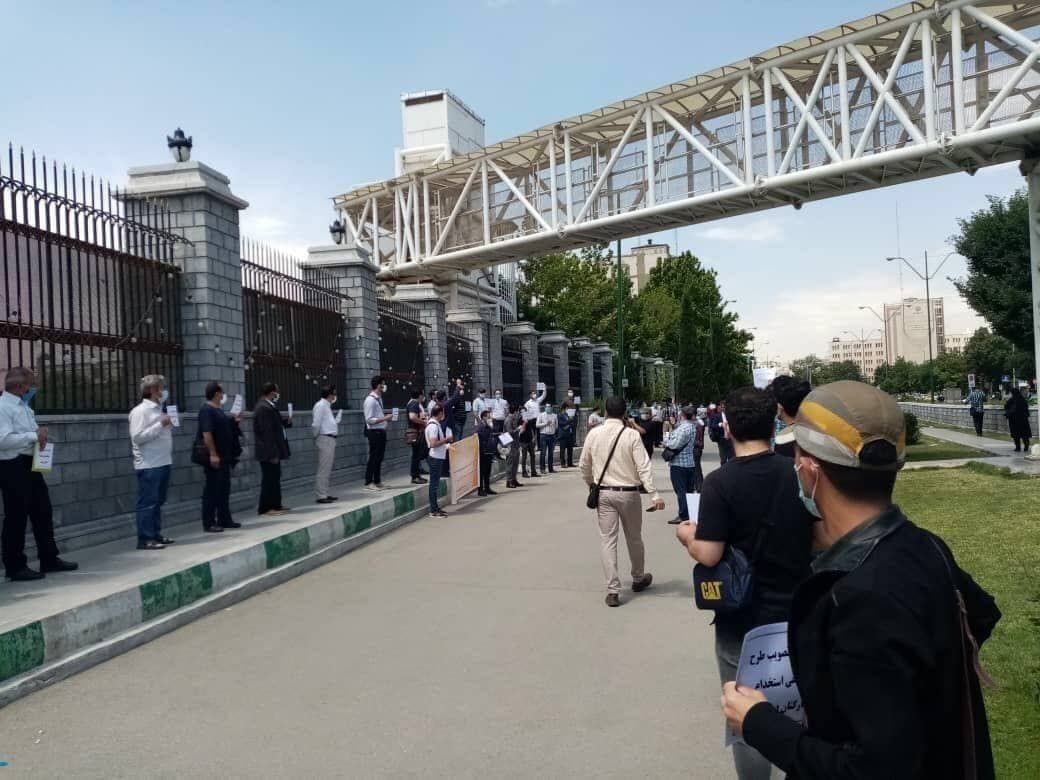 Social protest and strikes are rampant across Iran. The regime is rightly terrified / Image: irankargar

President Rouhani in his 20 March new year speech, showed how completely out of touch he is with reality. He talked of an ongoing economic recovery and of investments from the empty national development fund. Yet, on the contrary, there is no economic recovery in sight. Rather, Iran faces its deepest social crisis in living memory. Inflation was 50% in April, the highest figure in 75 years. Officially unemployment is 12.2 percent but in reality it is at least double that figure. The regime itself admits that 80 percent of the population lives in poverty. Meat consumption has fallen by 50 percent. In the last year the price of rice has increased 150%! There are even reports of the poorest buying bread in instalments.

The COVID-19 pandemic has also sharpened the social crisis. In April, new lockdowns were announced as Iran faced its fourth wave. Healthcare workers were completely overwhelmed, and they continue their protests, on a smaller scale, for full-time contracts, payment of wages in arrear, more staff, and more equipment. Surrounded by death on a daily basis, worked to the bone for meagre wages, and faced with a government that has completely ignored them for months, a few nurses have actually committed suicide in protest!

Bazaaris and street vendors have been forced to close without any government support under the threat of the destruction of their shops and goods should they remain open. Instead of aid, the government has increased their rents, sparking protests. Three million workers have become unemployed since the new lockdown.

Government aid, which exists in the form of subsidies and price controls, is completely inadequate. There are constant reports of kilometre-long queues for scarce essentials like subsidised chicken. And yet, farmers and workers report that warehouses are full. There is no lack of food, only a lack of food that workers can afford. The capitalists are happy for the masses to inch closer and closer to starvation if it means massive profits on the black market. Small scale producers and bazaaris, on the contrary, even with subsidies, are unable to keep up with increased costs and they face economic ruins.

The regime, having nearly depleted the country’s foreign currency reserves, including the national development fund, is now facing massive inflation. They cannot continue printing money for even these limited social programmes. This inevitably means confrontation with the masses. President Rouhani, in his May Day speech, spoke of the need to, “increase economic capacity many times over, but not by investing in factories and equipment, by increasing work shifts,” and to, “reduce domestic consumption and increase exports.” In other words, he spoke of the need to increase the exploitation of the Iranian working class. This means a continuation of attacks on workers. Already, the price of bread is being deregulated in order to allow corrupt governors the freedom to set prices. This will only throw petrol on the burning anger of the masses. It has the potential to trigger more strikes, protests, and even an uprising.

For an independent labour movement!

The deep economic crisis of Iranian capitalism and growing class struggle have plunged the entire Islamic Republic into a deep crisis. The regime is rightly terrified, especially as the June presidential election approaches. Last year, the regime had already seen its worst turnout for a parliamentary election in its history.

Besides outright repression, it is also mobilising forces such as its paramilitary Basij organisation, and its agents in the state unions and Islamic workers’ organisations to act as a fifth column inside the workers’ movement. These groups have demagogically supported many of the recent strikes and struggles, in order to derail them and to confine them within the limits of the present system. While, on the one hand, formally supporting the struggles, these elements have also openly defended the employers and the regime, and have even cooperated with security forces against the strikers. 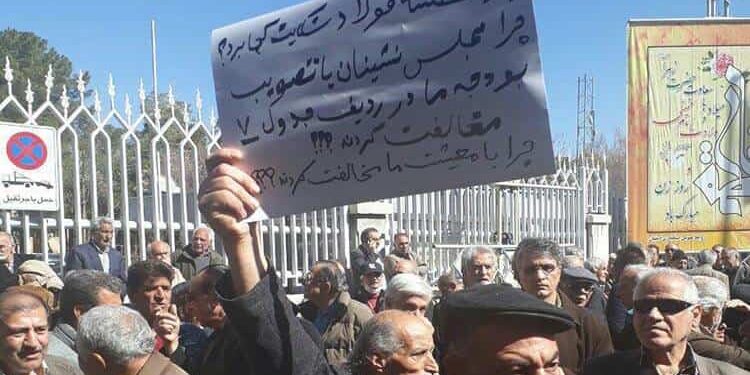 The deep economic crisis of Iranian capitalism and growing class struggle have plunged the entire Islamic Republic into a deep crisis / Image: irankargar

In the oil sector, these provocateurs played a pivotal role in bringing a recent national strike to an end, by promoting the hollow promises of the regime within the strike and thereby sowing confusion. They hijacked the strike and called on strikes to put aside militant action and instead resort to official appeals to parliament. While their shenanigans might disorient the movement in the short run, they are also radicalising the movement and raise class consciousness amongst the workers.

Inspired by the workers of Haft Tappeh, every month of this year so far, there have been unofficial calls for a new national strike by informal oil workers; one of the most militant groups among the strikes and protests of oil workers. In March they had a clear message for the leaders of the state unions: “Our response to Asalan Amini (a prominent member of the state union) is that we have the experience of Haft Tappeh sugarcane [workers] and that we take our decisions collectively and in [workers’] councils. We believe that any such decisions from above the worker’s head to be presumptuous and therefore declare it to be invalid”. This amounts to a declaration of war on the leadership of the Workers’ House – the national state-controlled union.

A national, class-independent movement is developing. This must be strengthened with a programme of political and economic demands, which can galvanise a national movement of all workers, youth and poor. At the centre of this programme must be the slogan, “Bread, freedom and councils,” which has been a popular demand in the past period and which echoes, along with many other demands, the traditions of the 1979 revolution which are today being revived.

Furthermore, the independent workers’ movement should raise the demand for the right to strike and protest, the reversal of all austerity of the past periods, living wages and pensions that increase according to inflation. Political demands should be included such as the renationalisation of all privatised companies under workers’ control, and the introduction of such control throughout the state-owned economy. Facing the immediate tasks of the COVID-19 pandemic, the demand must be raised for the full nationalisation of the healthcare sector under workers’ control, along with all related industries.

Such a programme would gain a broad echo in Iranian society: among the workers, students and the middle class. It would link the myriad of isolated struggles of workers, the middle class, students and farmers, which are erupting daily, into a formidable national movement capable of bringing the hated Islamic Republic to its knees, and opening a new period in the history of Iran.