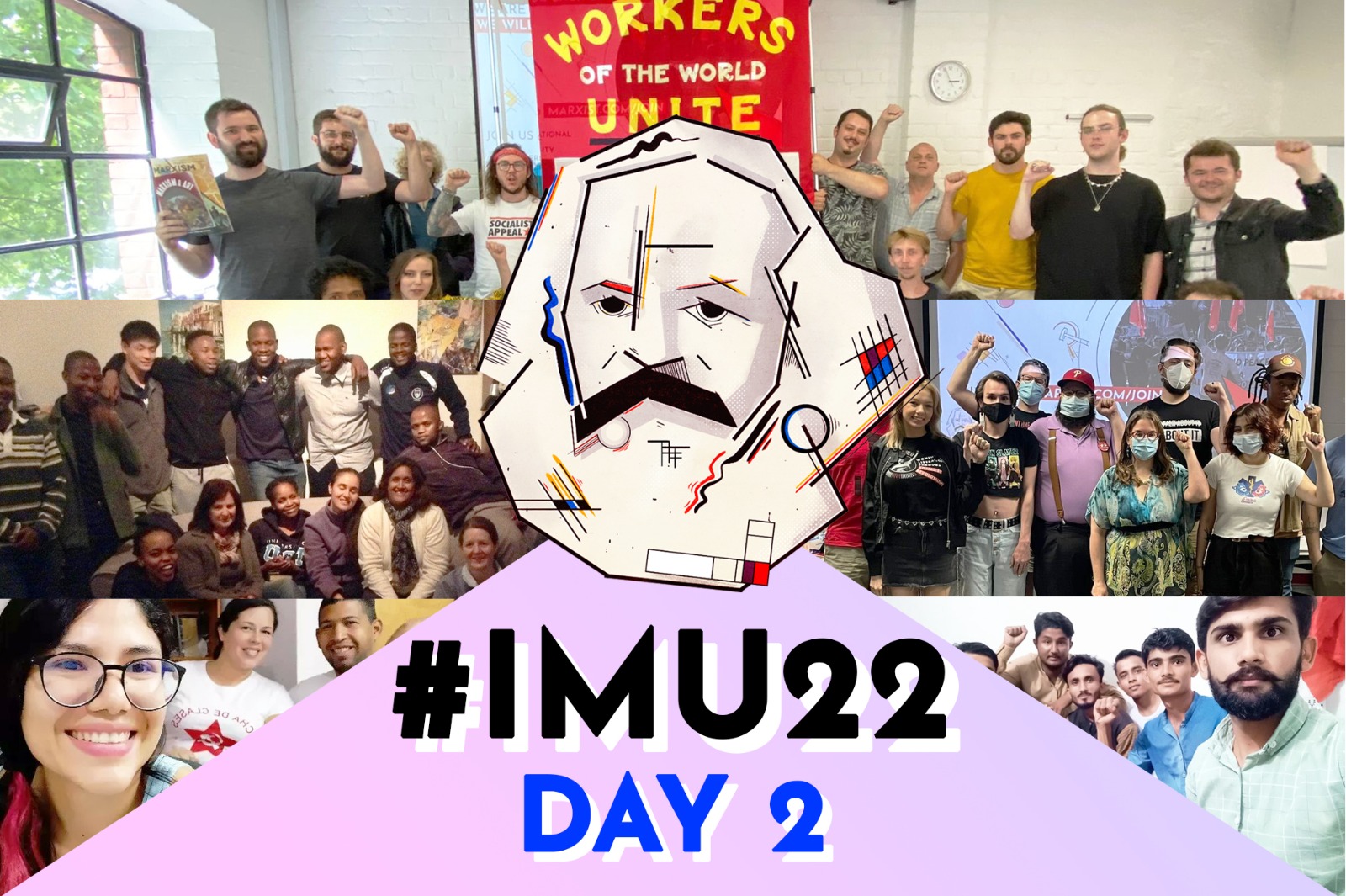 As the second day of the International Marxist University (#IMU22) draws to a close, we can look back on four fantastic sessions on art, the Enlightenment, historical materialism and economics. It was a day packed with the richest Marxist discussion to be found anywhere in the world.

With registrations continuing to rack up by the hour, many people around the world clearly agree with our assessment!

We are now on over 7,000 registrations and rising, with numerous comrades sharing images of watch parties, their favourite quotes, and reflections on the day using the hashtag #IMU22 – which, in true internationalist spirit, has created an online community for IMU attendees.

‘In a revolution the working class suddenly become aware they have been kept in ignorance & develop a burning desire to know. This is the essence of revolution’

Comrades of Pakistan have tuned in to attend the second day of #IMU22 from #Multan, #Bahawalpur, #Islamabad to #Kashmir, #KPK, #Balochistan, and so many more places! pic.twitter.com/fhCYZoL4WJ

Comrades were clearly inspired by Alan’s opening talk on Marxism and Art, sharing many of their favourite moments on social media. As Marxists, we are not merely interested in the barest means of life. We are fighting on all fronts – economically, politically and culturally – to win the working class a better existence.

"We are fighting to build a paradise in this world. Nothing more, nothing less." Alan Woods #IMU2022

As Alan explained: “Real art is revolutionary, by its very nature." And though it is often painted as a luxury, a frivolous extra, it is in fact inseparable from the development of humanity. In fact, it can be said that "art expresses what it is to be human.”

Unfortunately, we have become used to experiencing art in a debased, vapid state in the period of capitalism’s senile decay. In Alan’s words:

“Capitalism gives the public what it thinks they should have: a steady diet of rubbish with a minimum of politics and culture. A diet tailored to the purposes of the bosses and bankers. It’s the modern equivalent of bread and circuses. Without much bread.”

Interventions from comrades around the world reinforced the point that art is inseparable from revolutionary struggle. As John McInally, from Britain, pointed out:

“Revolution is not for Marxists simply a matter of political and economic transformation – it is more than that. It must be about unleashing, and freeing from restraint, the potential of every human being.”

We then had three more talks later in the afternoon: ‘The labour theory of value: the origins of Marxist economics’, introduced by Rob Sewell; ‘The enlightenment and the struggle for rational thought’, introduced by Yola Kipcak; and ‘How Marx made history: the development of historical materialism’, introduced by Jack Halinski-Fitzpatrick.

In his session, Rob explained that profit comes from the surplus labour of the working class. From this flows all the conclusions of Marxist economics.

But the foundation stone of Marx’s analysis, the labour theory of value, was first developed by the bourgeois economists Adam Smith and David Ricardo, back when capitalism still had a progressive element in developing the forces of production.

Nowadays, however, to have any scientific understanding of capitalism is incredibly dangerous to the ruling class. It would show nothing less than the fact that exploited workers are denied the full fruits of their labour.

Therefore, as Rob said: “The task of [bourgeois] economics today is to pull the wool over the eyes of the working class.” Today, the severe crisis of capitalism is helping to tear the wool off – exposing before the working class the true rottenness of this economic system.

But don’t take it from us! As James Kilby pointed out in his intervention, Amazon boss Jeff Bezos owned up to the real source of his vast wealth, when he embarked on his infamous trip to space last summer. He said: “I want to thank every Amazon employee and every Amazon customer because you guys paid for all of this.”

This is a realisation dawning on millions, laying the basis for a revolutionary shift in consciousness, which – combined with leadership grounded in Marxist theory – will facilitate the revolutionary struggle to end capitalism for good.

For bourgeois historians, human history is nothing but a series of unconnected events: ‘one damn thing after another!’ Marxism, on the other hand, aims to show how class struggle is the driving force pushing humanity from one mode of production to the next.

“It's when there's a clash between the relations of production and the further development of the mode of production – that's when society goes into crisis and you see a period of revolution and counter-revolution.”

This stands fully opposed to the idealist conception of history, which explains everything as a product of ‘great men’. Here we begin to see how the three pillars of Marxism, in philosophy, history and economics, are fundamentally intertwined. “Marxism explains that great individuals are only great because of the social forces that they are able to represent.”

Finally, in the session, 'The Enlightenment and the Struggle for Rational Thought', Yola Kipcak of Der Funke, the Austrian section of the International Marxist Tendency, took us on a tour of the revolutionary ideas of the Enlightenment.

In their day, the ascending capitalist class drove the Enlightenment. It was a revolutionary class. But today their system is decaying, and in proportion as with this decay, they have turned their back on the pursuit of truth and on the great thinkers that they produced in their revolutionary youth.

Yola explained how the ideological defenders of capitalism "openly deny that there is such a thing as truth, objective reality and laws that can be discovered. With this, they also openly attack the age of enlightenment."

We, however, are clear that we stand on the shoulders of giants: “Marxism is the true heir of these courageous and revolutionary thinkers.”