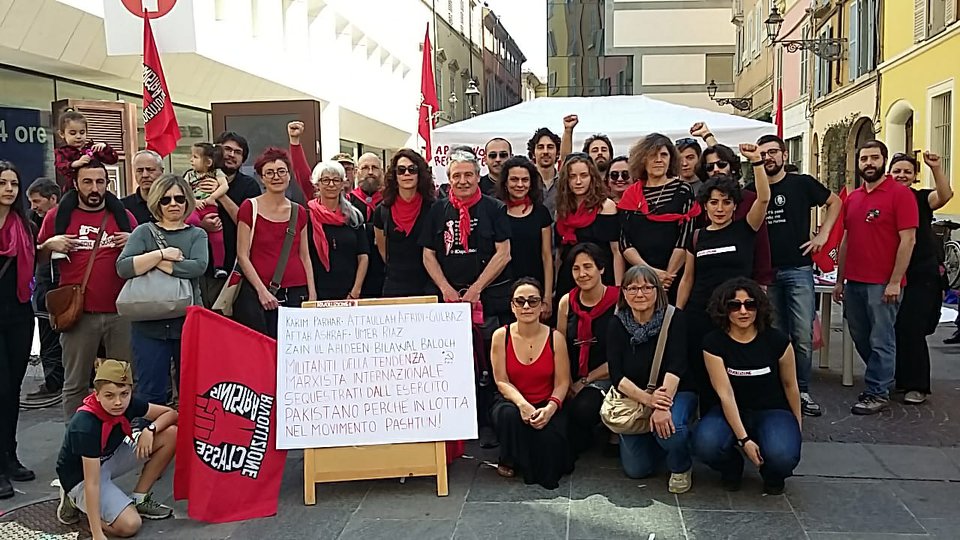 The international campaign demanding the release of our comrades, who were abducted by the Rangers in Karachi on 22 April, continues to build. There have been demonstrations at Pakistani embassies all over the world, and our official petition has acquired thousands of signatories, including from some prominent figures from the political left and trade union movement. Here, we provide an update on the solidarity campaign's latest activities.

We received a solidarity message from the teachers' union APP. Additionally, comrades from Esquerda Marxista in Brazil picketed the Pakistani embassy in Rio de Janeiro, demanding the immediate release of the abductees in Karachi: 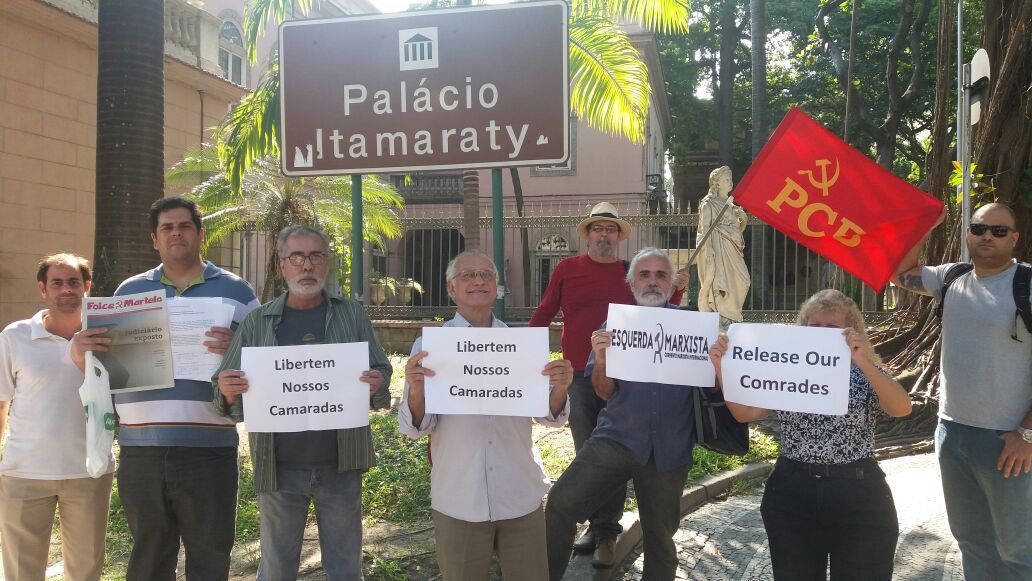 Socialist Revolution, the Marxists in the USA, protested the Pakistani consulate in New York City. They also sent in solidarity photos from Oakland, California; Ames, Iowa and Boulder, Colorado: 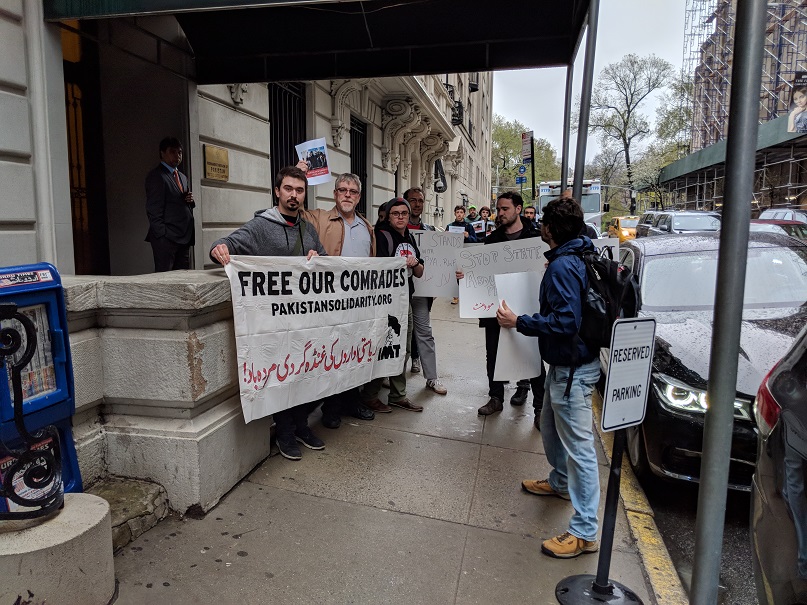 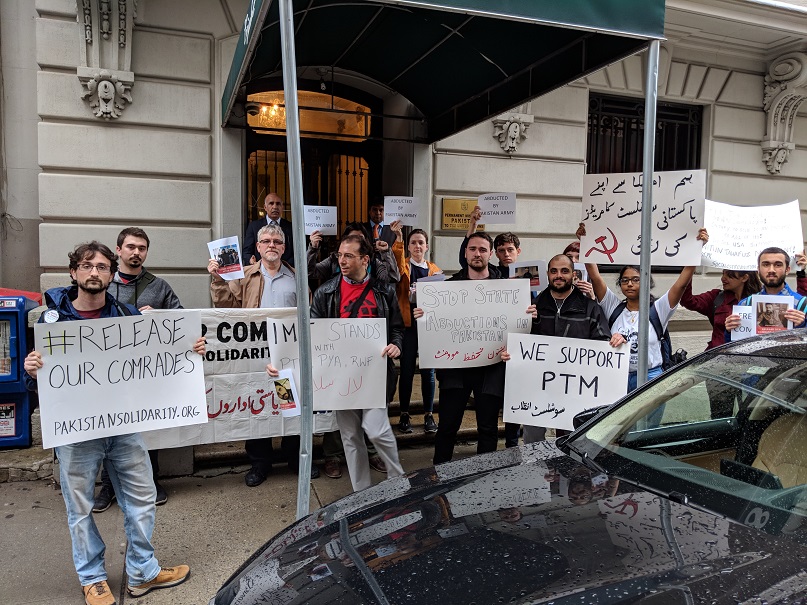 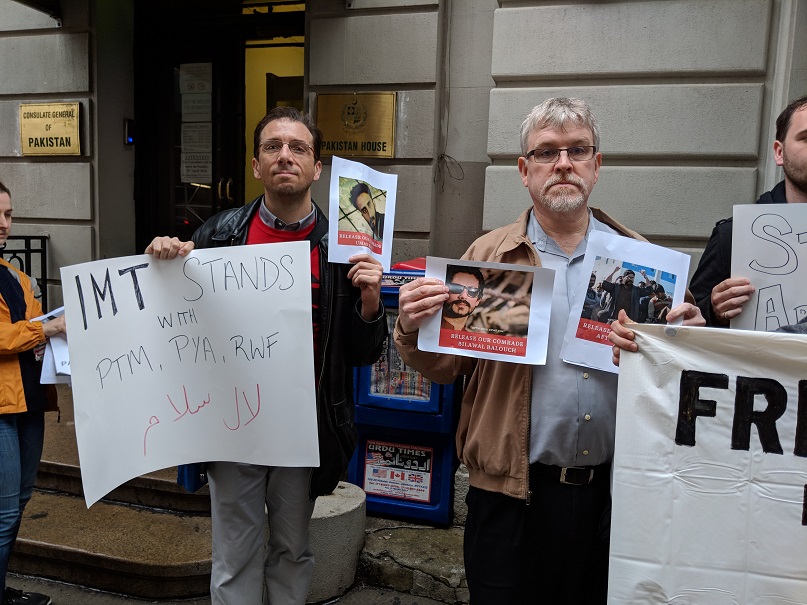 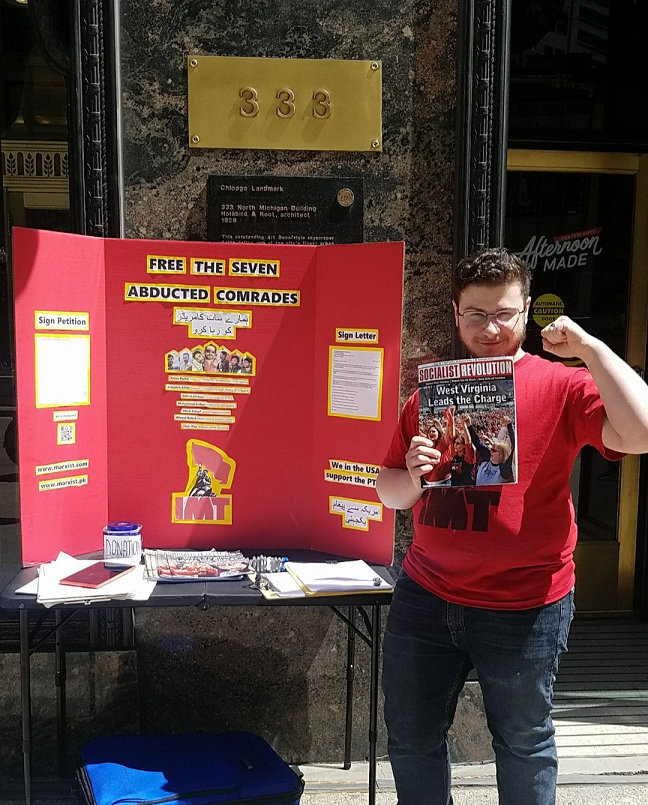 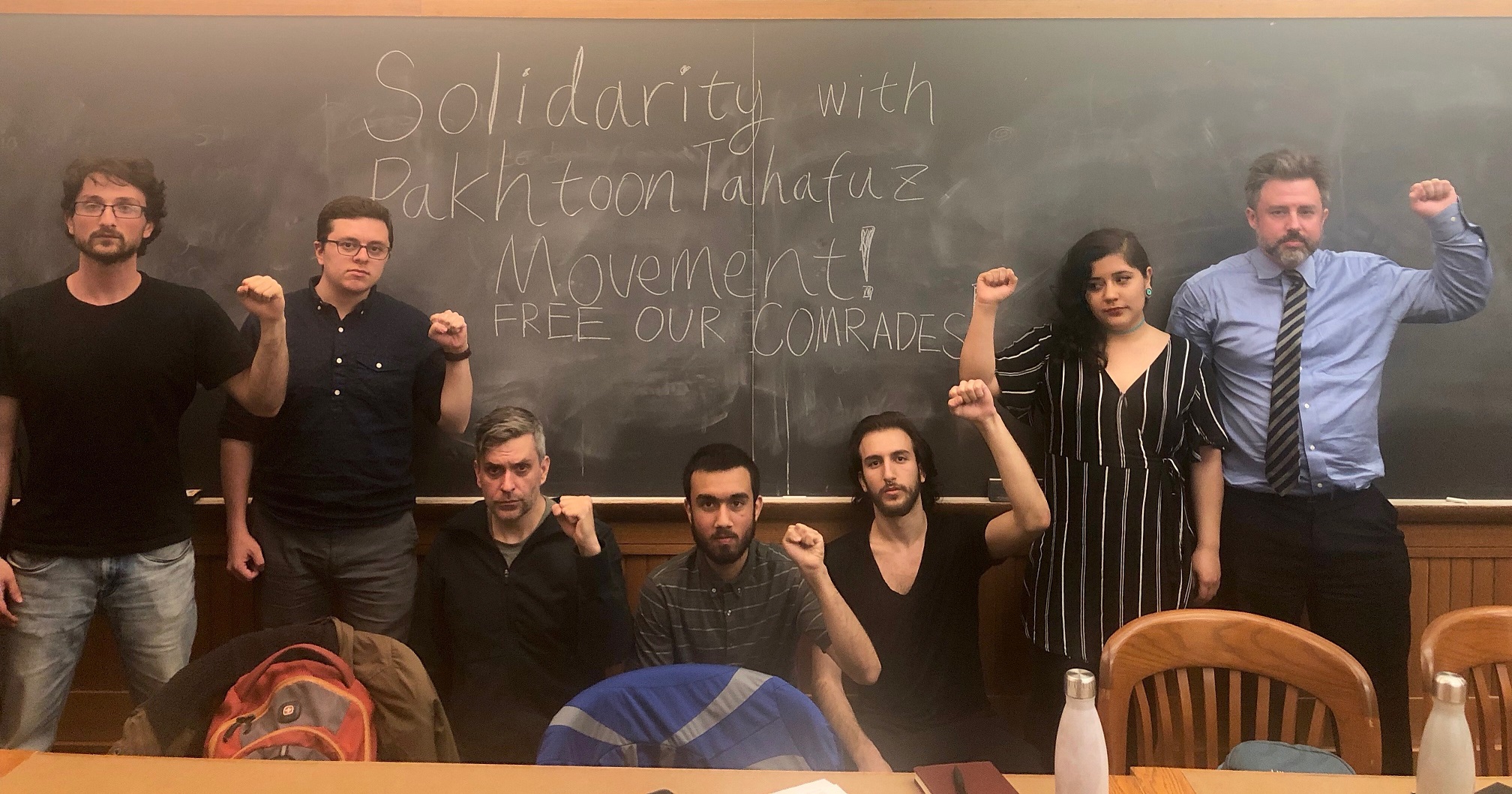 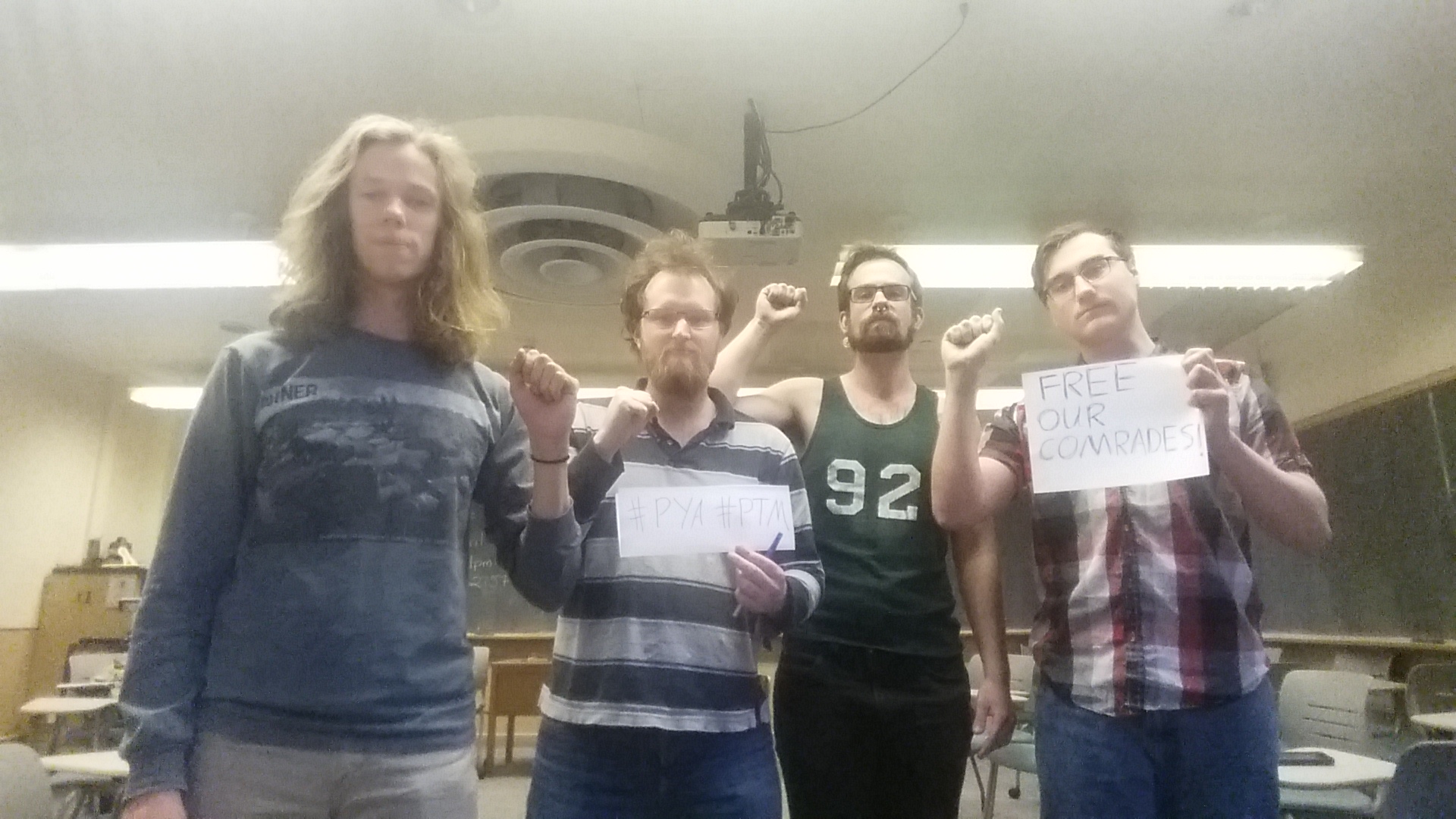 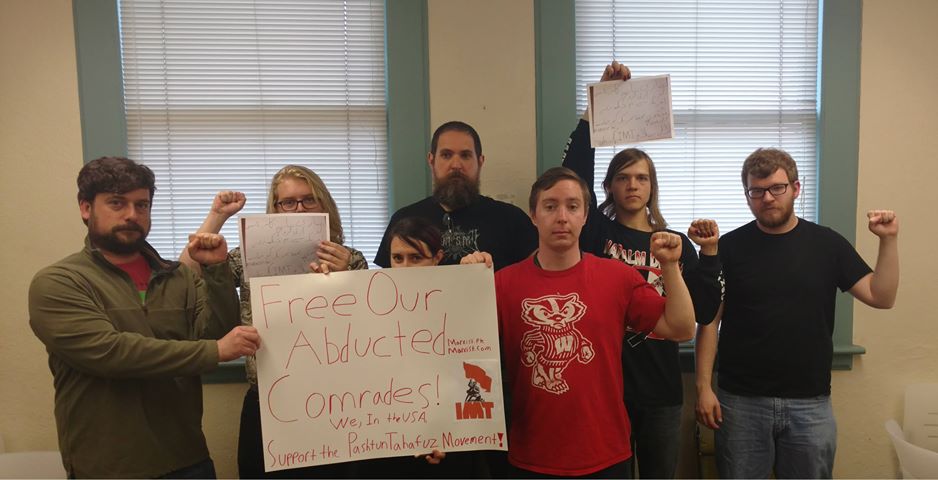 A solidarity motion was also passed, and photograph taken, by the Paterson DSA branch in New Jersey: 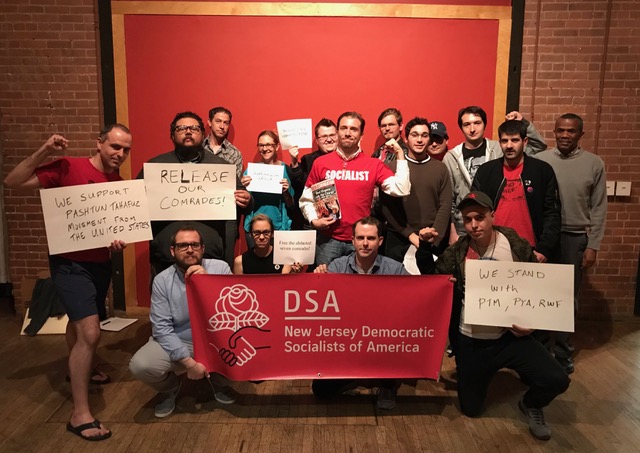 Comrades staged a demonstration in front of the Pakistan Consulate in Chicago in solidarity with the Pashtun Tahafuz Movement and demanding the immediate release of the seven abducted comrades. They created and distributed a leaflet explaining the situation and printed a letter with our demands to the Consul General in Chicago, with a space for supporters to sign.

A Caracas branch of Lucha de Clases sent a solidarity photograph for the abducted comrades: 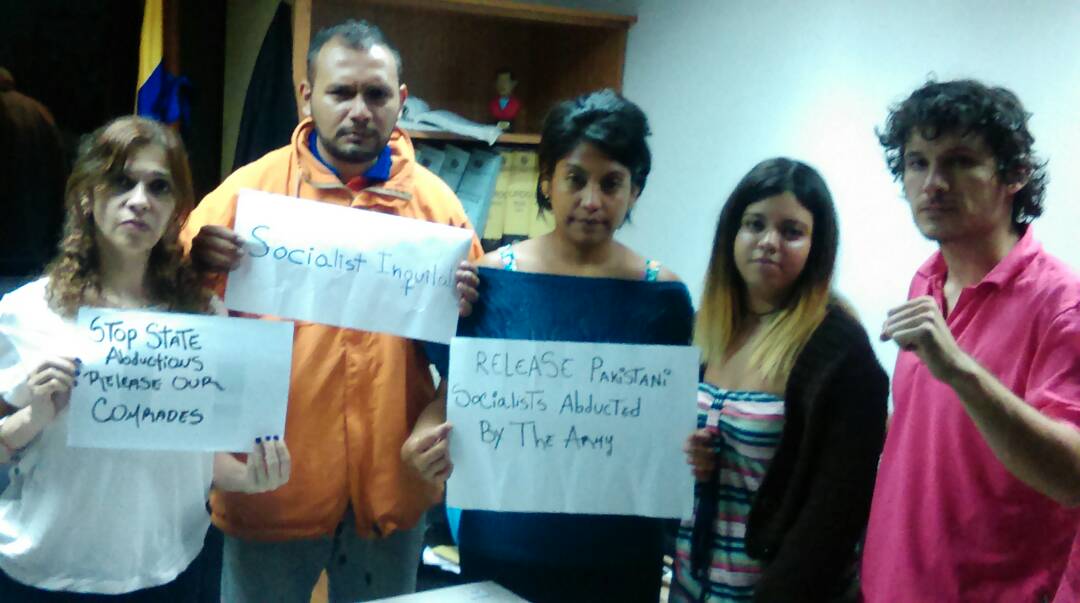 In Mexico, the following left-wing and labour organisations signed our petition:

Students at the National Polytechnic Institute in Mexico sent their solidarity to the arrested Pakistani comrades, as did the well-known, left-wing writer and activist, Paco Ignacio Taibo II: 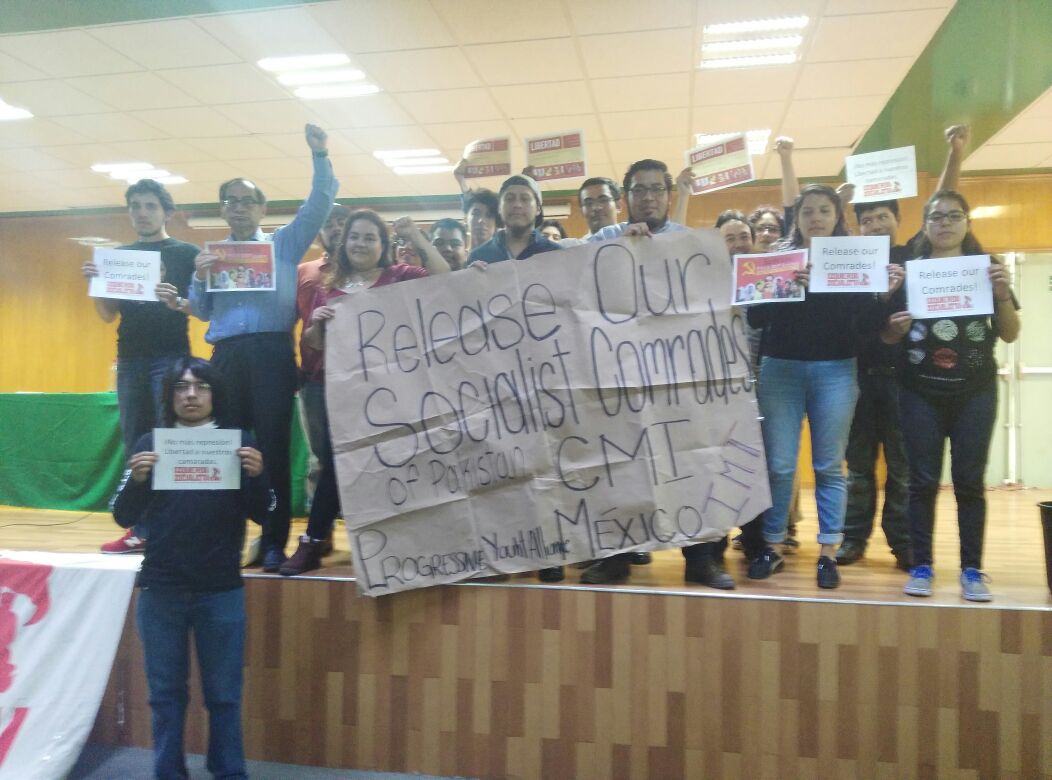 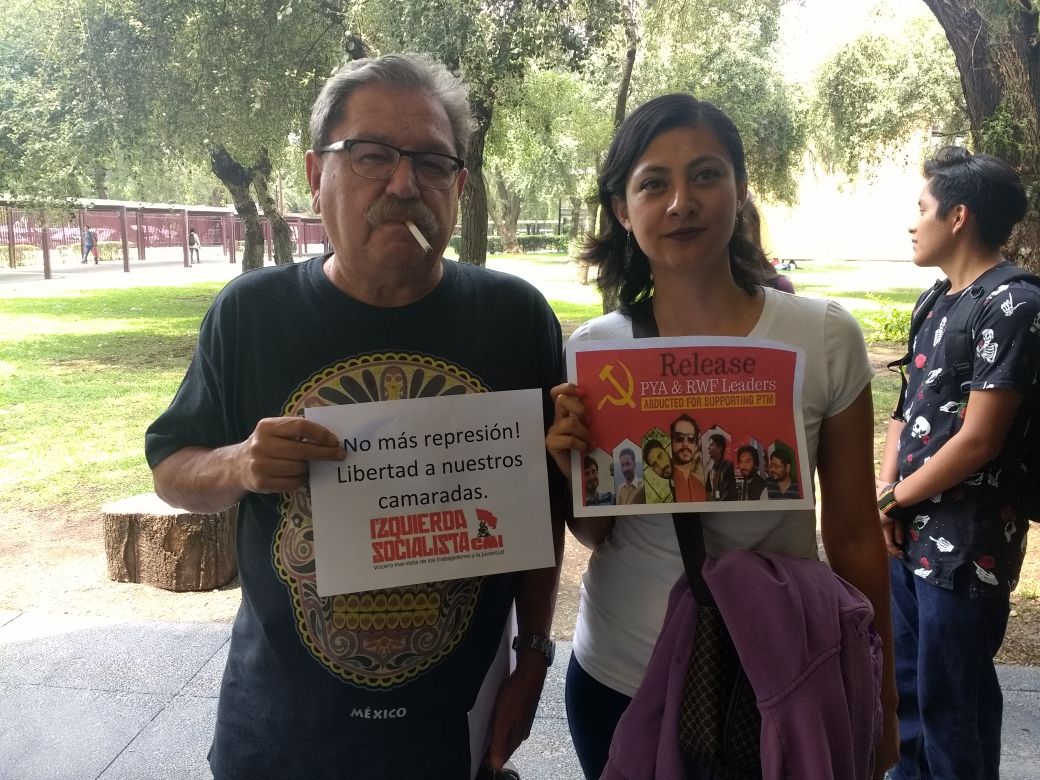 The comrades also picketed their embassy:

Amir Khadir, Québec Solidaire member of the National Assembly of Quebec, sent a letter to the Pakistani Consulate demanding the immediate release of our comrades: 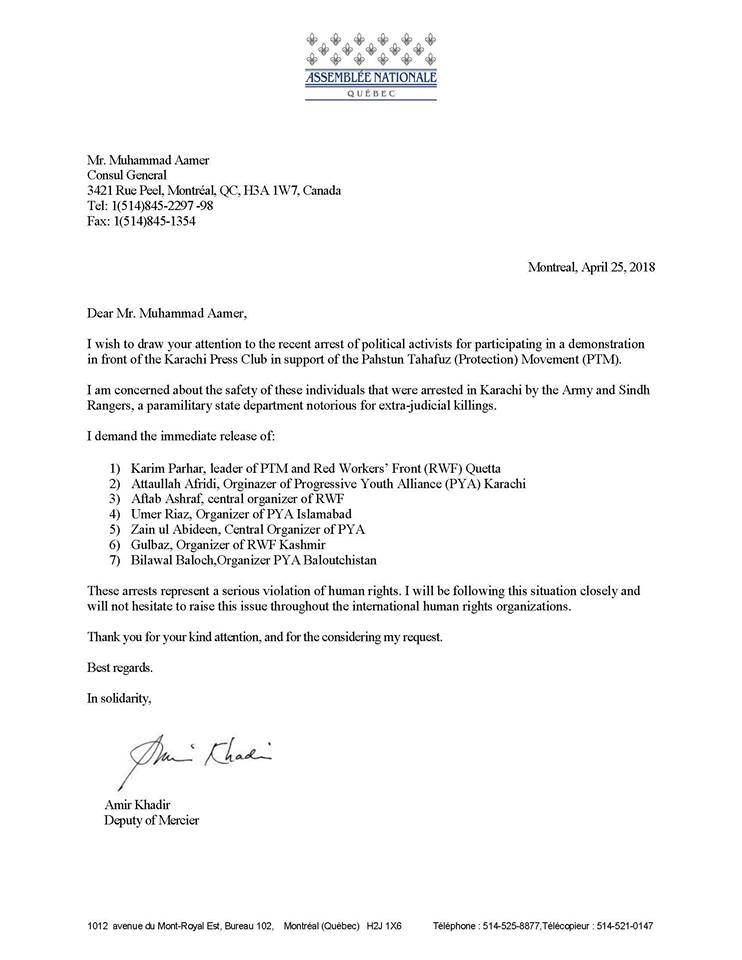 The comrades of Socialist Fightback at York University assembled to show their solidarity: 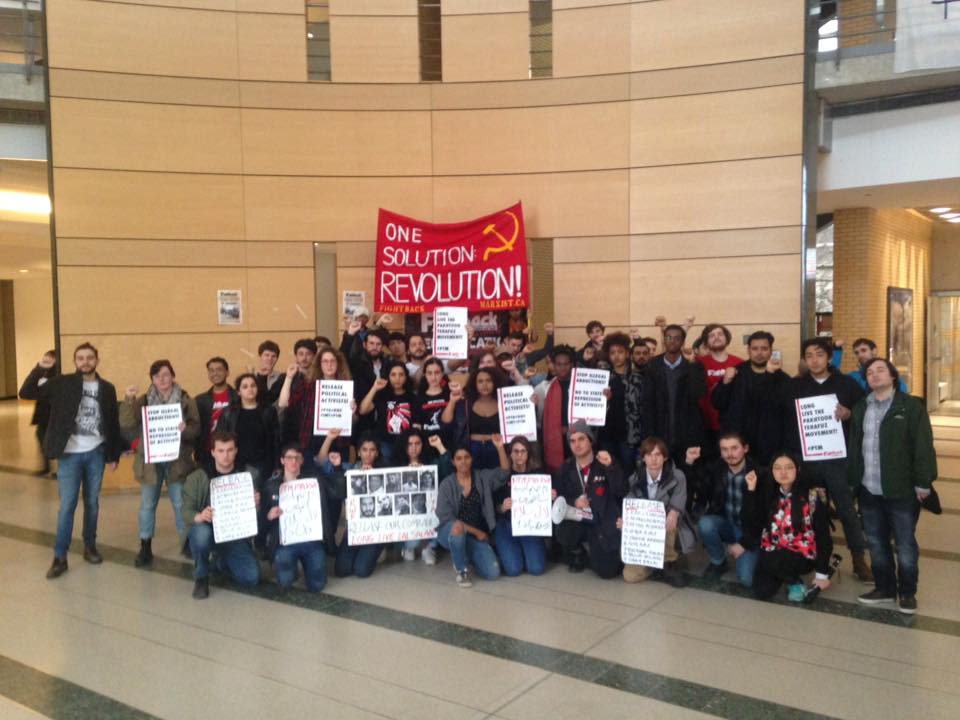 Fightback also paid a visit to the Consulate in Toronto:

The Alzey branch of Linksjugend ['solid] (the youth organisation of Die Linke) expressed its solidarity with our abducted comrades: 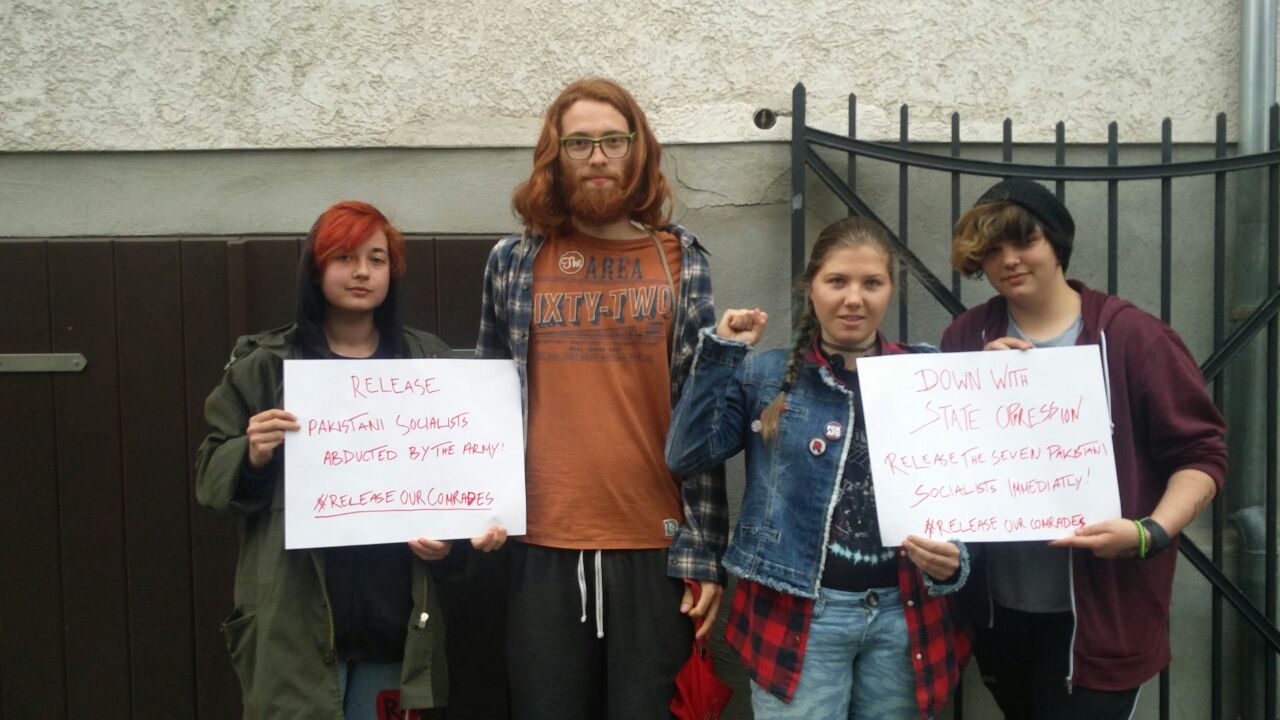 As reported yesterday, the Swiss Marxists protested the Pakistani embassy in Bern and the United Nations building in Geneva: 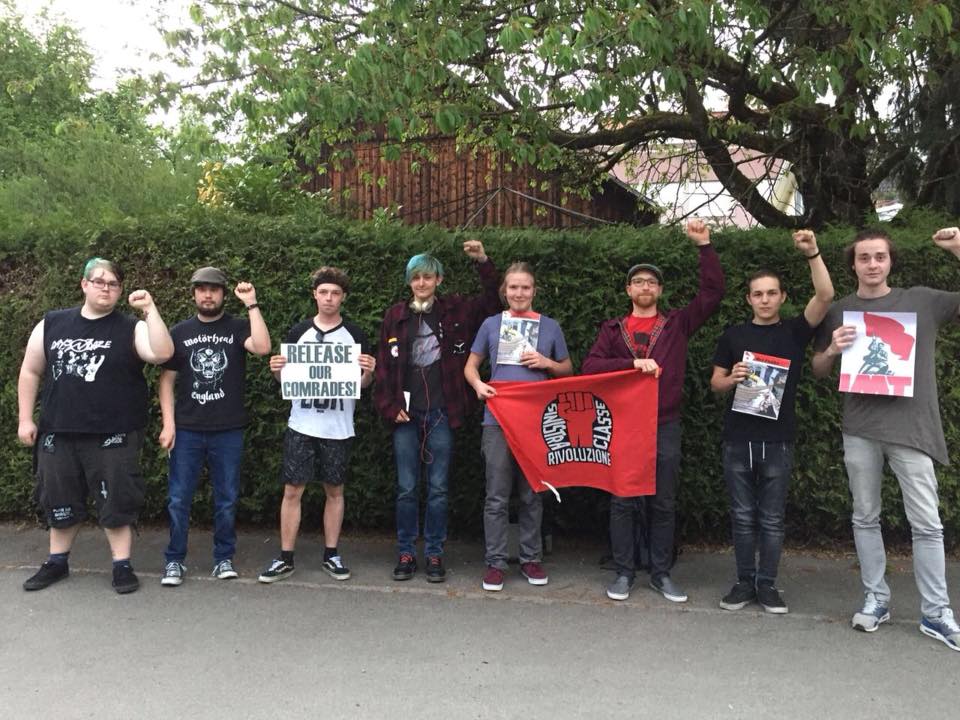 National spokesman for the Andalusian Trade Union of Workers, Óscar Reina, recorded a message in solidarity with the IMT comrades disappeared in Pakistan:

The comrades in Madrid sent a solidarity photograph for the abducted activists: 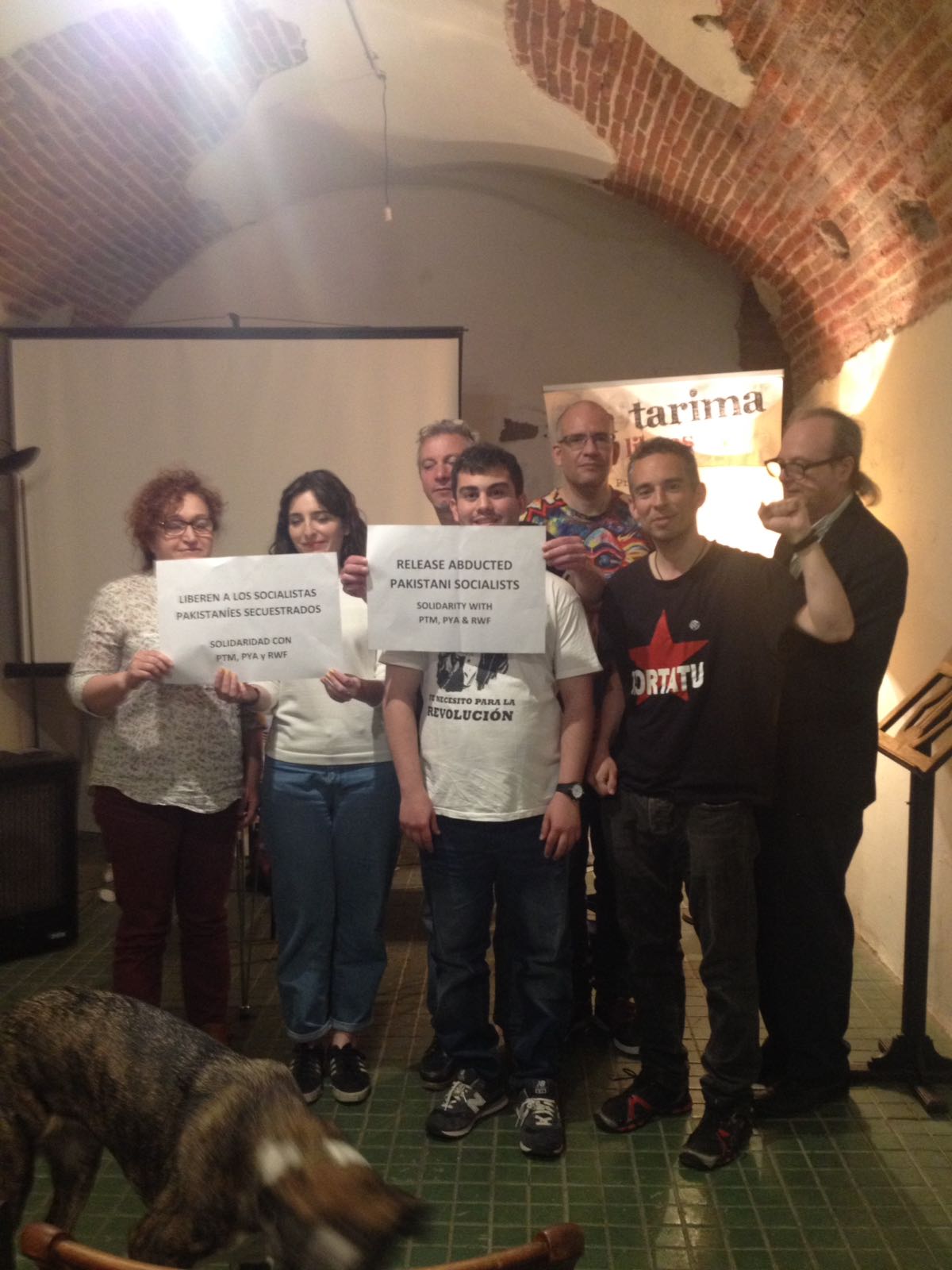 We have received a number of new prominent signatories in Spain, including:

The Danish comrades picketed their Pakistani embassy, where they were harassed and filmed by officials:

Vidal Aragonés, CUP member of the Catalan Parliament, added his voice to the chorus of protest. IMT comrades from the Barcelona branch of REVOLUCIÓ also took a solidarity photo: 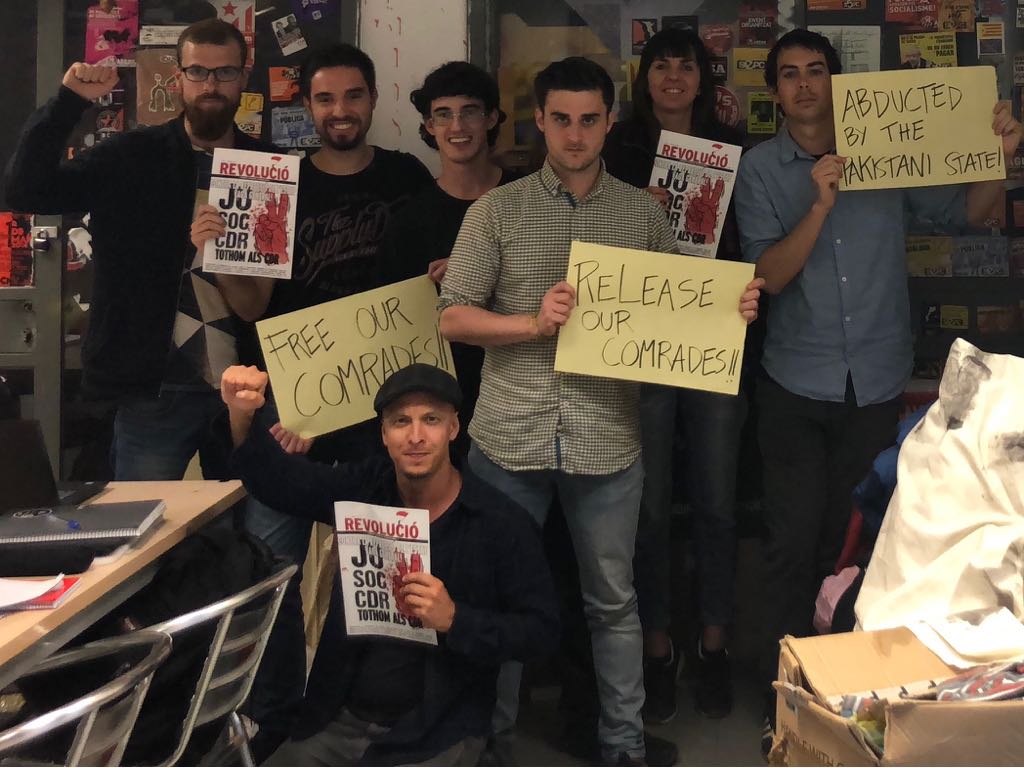 Veteran class fighters from the Merseyside Pensioners' Association, who participated in the struggle against Margaret Thatcher, passed the following, unanimous statement of soldiarity with the abducted comrades:

The MPA notes that seven prominent youth and trade union activists have been disappeared in Karachi by the Army and Sindh Rangers, a paramilitary state department notorious for extra-judicial killings. Nobody has been told about their whereabouts so far and no case has been registered against them.

These activists, were arrested because they joined the solidarity protest of Pashtun Tahafuz (Protection) Movement (PTM) in front of the Karachi Press club.The protest was organized and called by the leadership of the PTM as they were being denied the right to hold a peaceful public meeting in Lahore.

The MPA demands the immediate release of these seven activists abducted by the Pakistan Army. Their only crime is to have expressed their views about the Pakistani State and supported the PTM. We also insist that the demands of the PTM be accepted immediately and that the State end its atrocities in the tribal areas and stop supporting Islamic fundamentalism.

Yesterday, the Italian section of the IMT, Sinistra Classe Rivoluzione, made interventions raising the abduction of our comrades at April 25 rallies celebrating of the fall of fascism in Rome, Milan, Bologna, Modena, Parma, Pavia, Padua, Naples, and other towns: 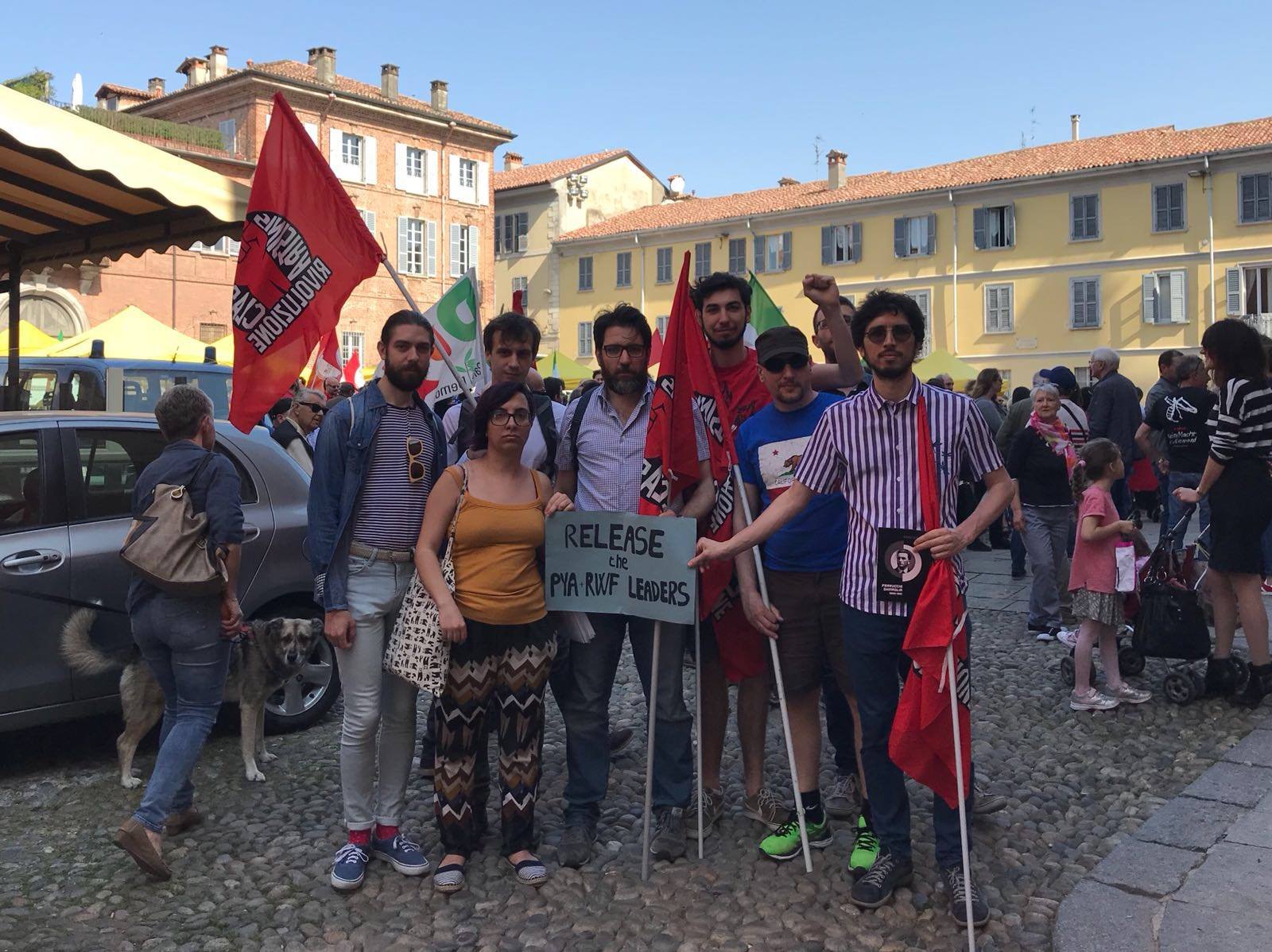 The comrades also contacted the Pakistan embassy in Rome asking for an urgent meeting. The response was that the officials have applied to the Ministry in Pakistan and are waiting for an answer, but at the moment they are not in a position to grant an appointment. As the embassy was closed yesterday due to the national holiday, a picket will be organized in the coming days, which will require police permission.

We publish here a list of the first signatories from Italy. The comrades also collected other signatures in yesterday's rallies:

In Greece, the following prominent figures have added their names to our petition:

Furthermore, the Greek comrades protested outside the Pakistani embassy in Athens:

Our comrades in Nepal wore photographs of the abducted Pakistani Marxists and publicly protested their disappearance:

The state abductions in Pakistan was raised at a young unionist meeting in Prague. Some of the attendees agreed to take a photo to show their international solidarity, and draw attention to the case: 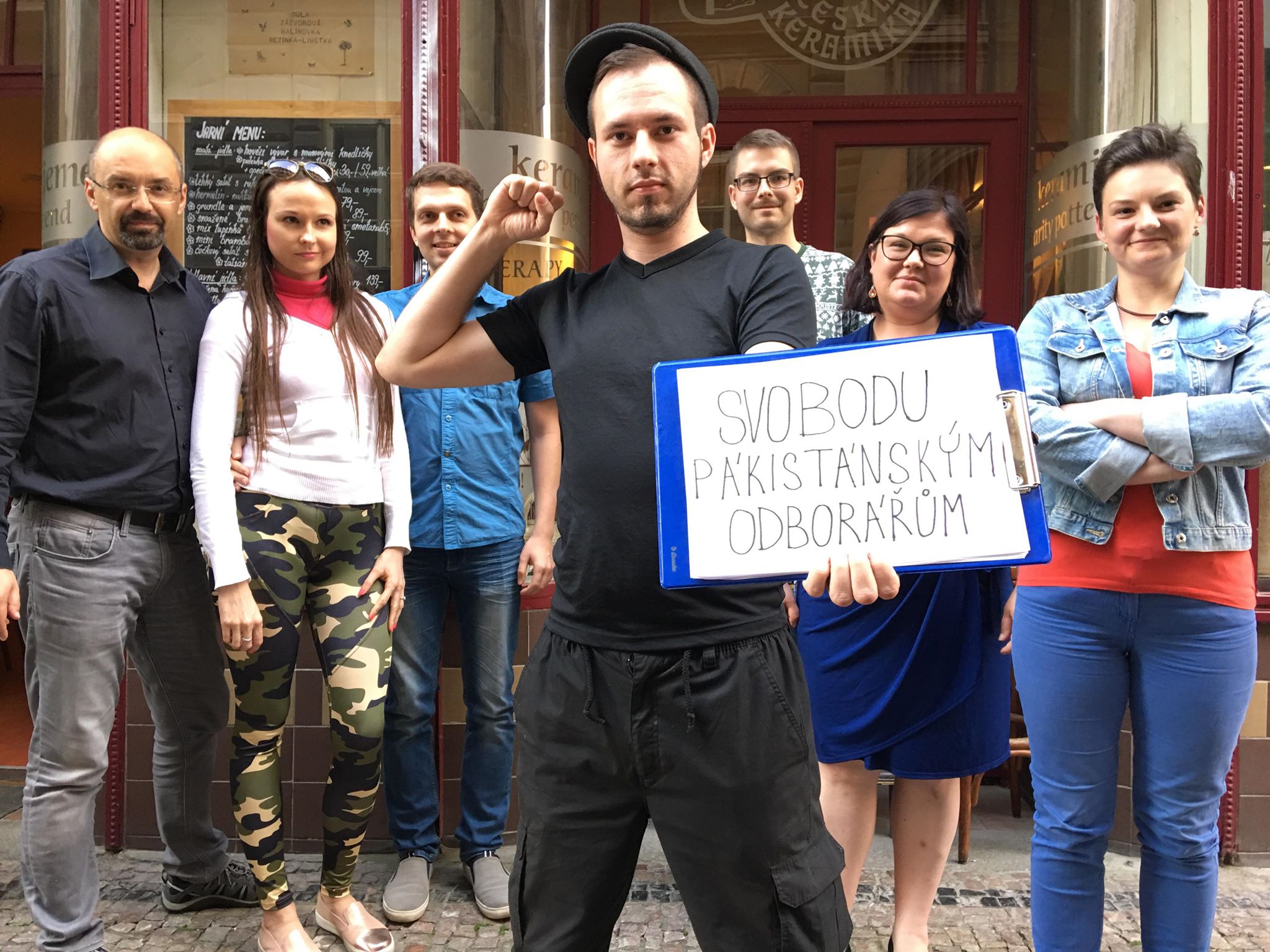 Comrades in Indonesia publicly protested the abduction of PYA and RWF activists by the Rangers: 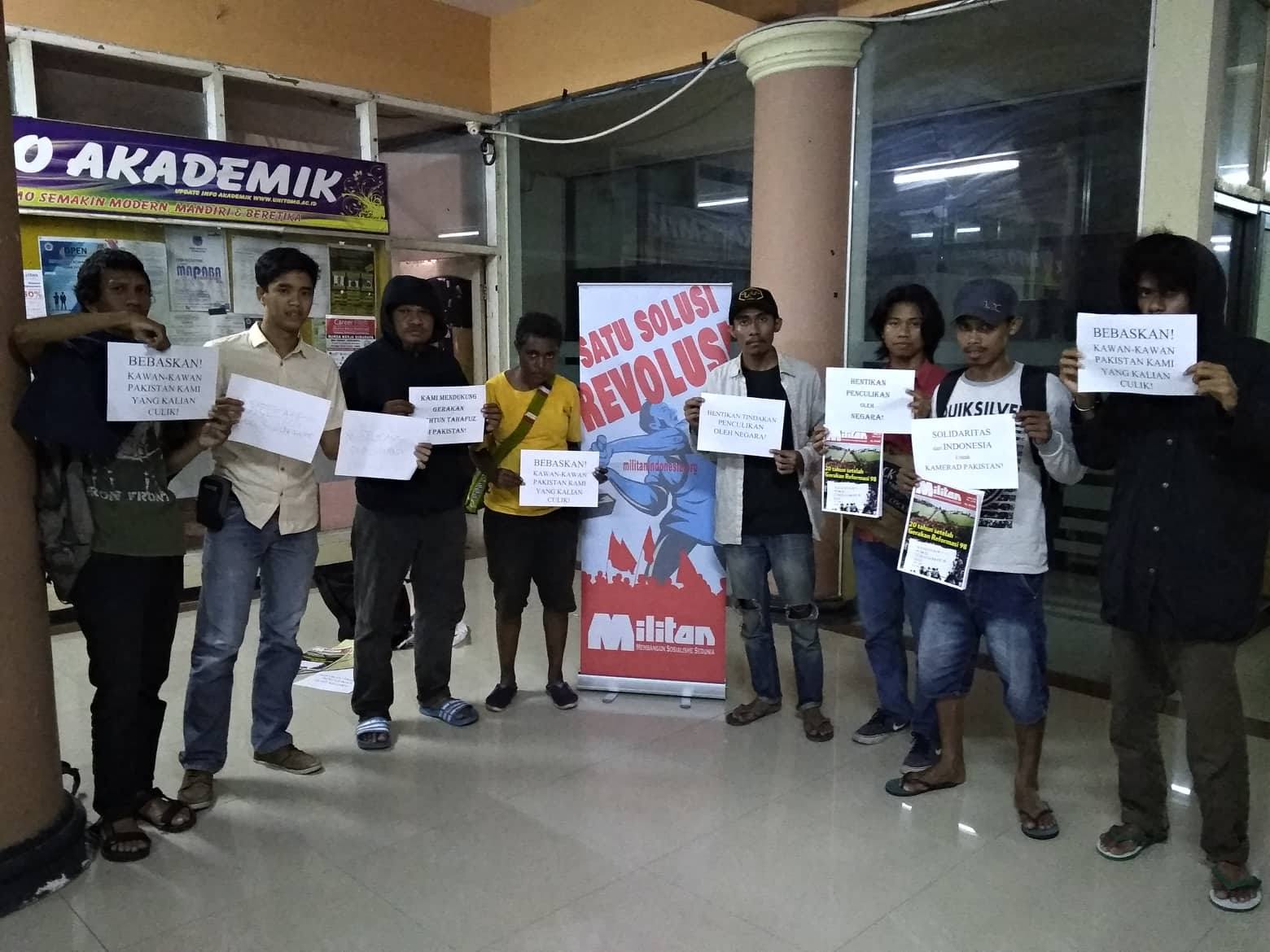 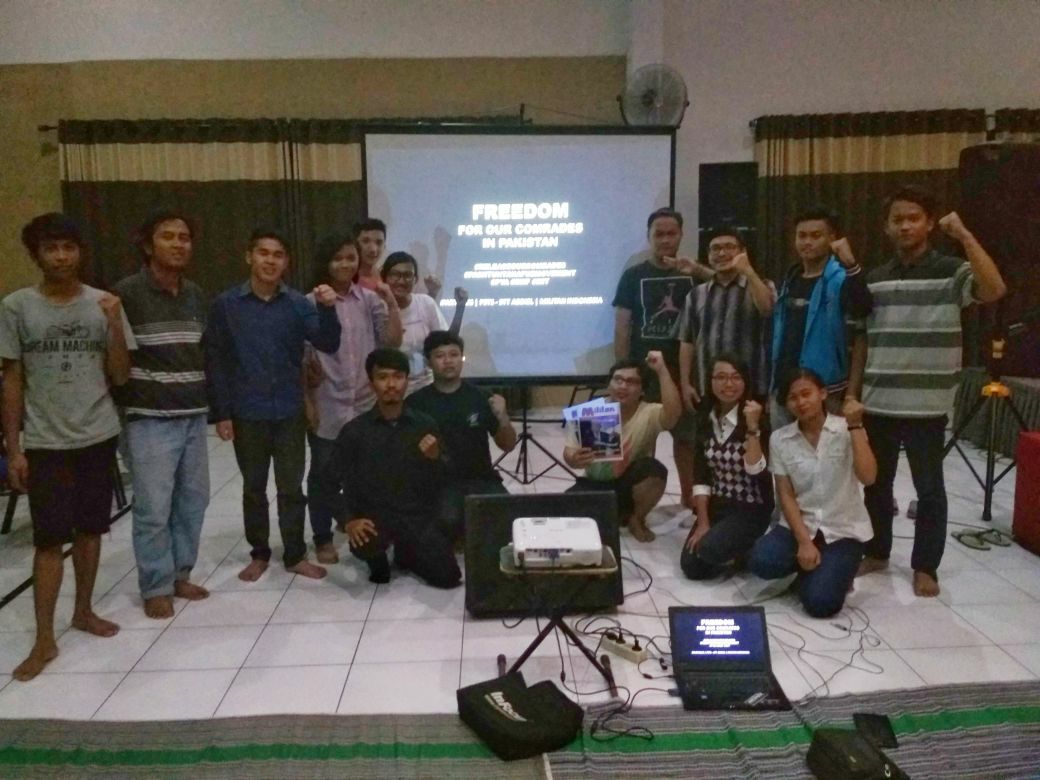 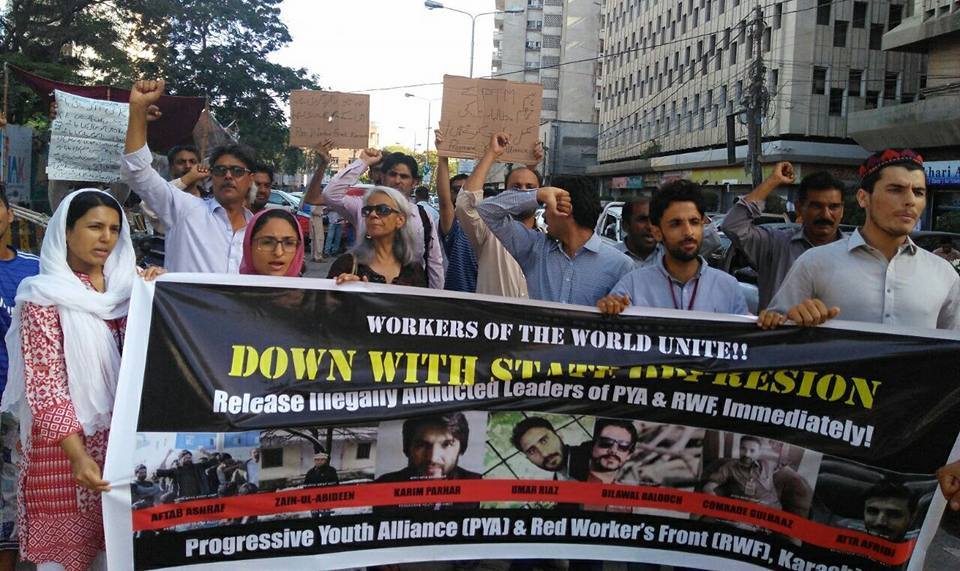 Furthermore, the following Indonesian trade unions, student organizations, and other activist groups have signed our petition condemning the abduction of socialist activists for their solidarity activity with the Pasthun people, and demanding their immediate release:

Finally, there were a number of protests and demonstrations against the abductions in different parts of Pakistan, including Islamabad, Multan, Peshawar, Rawalakot, Buner and Quetta:

However, a large demonstration in Lahore was broken up by the Punjab police, leading to the arrest of over 30 activists, including members of the IMT.

Keep up the pressure!

Comrades' international solidarity has had an effect: four of the abductees have recently been released. However, three remain in the Rangers' custody in Karachi: Bilawal Baloch, Umer Riaz and Mohammed Gulbaz. Not to mention the comrades who have now been arrested by the police in Lahore. Comrades and supporters must keep an international spotlight on the actions of the Pakistani state to ensure all the activists are released unharmed.

The world is watching!