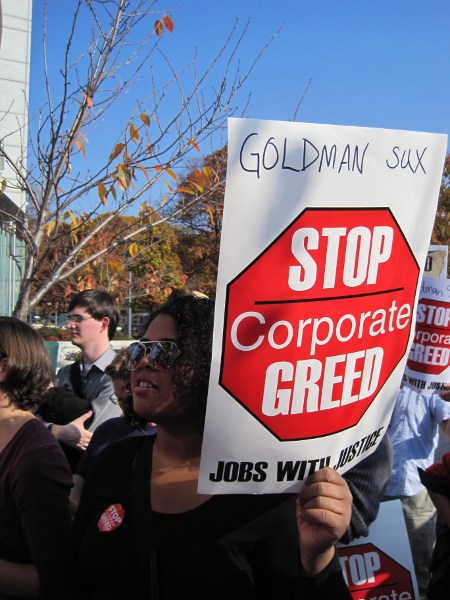 Goldman Sachs has been accused of fraud and is up before the American Securities and Exchange Commission. What is coming out of all this are the clever tricks of the trade, i.e. how to make money from money, without actually investing in the real economy, and in the process “advise” people on how to lose their money while making the likes of Goldman Sachs very rich... until it all crashes of course.

Goldman Sachs is banking royalty. GS is currently in the dock before the American Securities and Exchange Commission charged with fraud. The details are complex. Of course. That’s partly how outfits like GS have been able to pull the wool over the eyes of the world for so long.

GS is in part an investment bank. This means that, in addition to taking in deposits and lending money back out, they make a commission by advising rich clients. In effect they act as racing tipsters. Now imagine a tipster advised you on placing a bet, took your money and then went out and doped the horse. You would be angry.

GS doesn’t advise on anything as vulgar as tipping race horses, of course. They are financial advisers. They constructed an esoteric financial instrument called a mortgage-backed Collateralised Debt Obligation (CDO) with the help of a speculator called Paulson. They both knew the mortgages were duff. Then GS advised people to bet on the CDO. John Paulson knew what he was doing. In Paulson’s world you can make money by betting on a horse coming last as well as one coming in first. CDOs are described as ‘highly leveraged’. That means if you win you can ratchet up the winnings. But if you lose, you lose big time.

So they doped the horse (sorry, CDO) by filling it up with dodgy mortgages and sold it on as sure fire winner, a gold-plated investment. Royal Bank of Scotland was one of their suckers. The German bank IKB alone lost $150m on Goldman’s advice. They are very angry.

To add insult to injury in the middle of this scandal GS declares that quarterly profits have doubled to $3.5bn and that the bank is setting aside $5.4bn to pay its employees. There is no doubt the White House is putting on the pressure now. Economic adviser Austan Goolsbee makes the point, “Before they all pat themselves on the back for the great job they did and get a big bonus based on their profits, somebody ought to recognise that a great deal of their profit came from financial intervention from the government to save their bacon.”

GS is, of course, contesting the SEC allegations. They are quite prepared to spend a fortune defending the fortunes they have already made. Expect this story to run and run. This is just a report on who and what has crawled out of the woodwork so far. 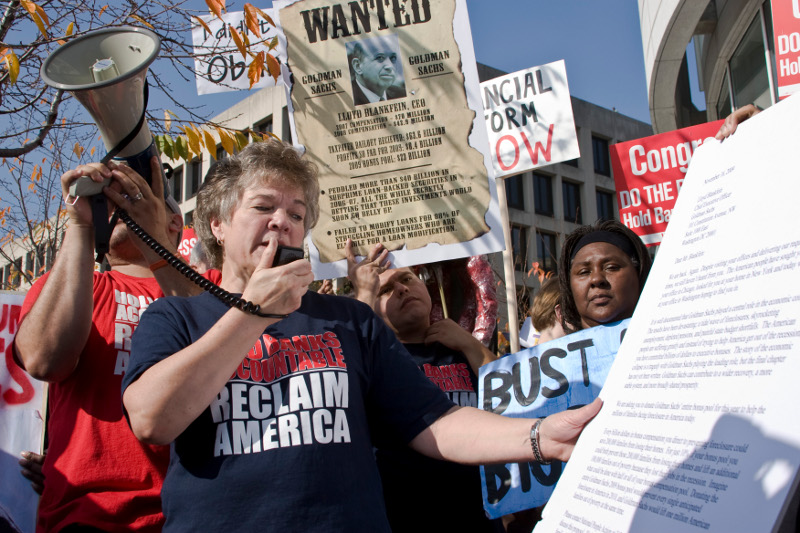 Protest outside Goldman Sachs. Photo by David Sachs, SEIU. The CDO scam was hatched in London, the Dodge City of finance capital. Fab Tourre was Goldman’s man on the spot. In one email in January 2007 he wrote: "More and more leverage in the system. The whole building is about to collapse anytime now… only potential survivor, the fabulous Fab... standing in the middle of all these complex highly leveraged exotic trades he created without necessarily understanding all of the implications of those monstrosities". Now he’s been suspended, after the damage has been done. Isn’t that a bit late?

GS will wriggle every way to get out of this. They certainly have friends in high places. Swindling became much easier in the heady atmosphere of financial deregulation in the 1990s. Bill Clinton was the President who presided over deregulation and the amassing of fortunes in finance. Now, he says, he regrets it. He was just a babe in the wood, following the advice of his economic advisers. Larry Summers and Robert Rubin, who actually pushed through deregulation during Clinton’s presidency, were of course both former Goldman employees. So is Tim Geithner, Obama’s present Treasury Secretary.

GS hasn’t just spiked the Democratic Party. In 2008, when the banks needed the government to splash out $700bn on the toxic assets (CDOs and the like) that they had created and sold each other, Hank Paulson of the Republican administration came to the rescue of the banks. Paulson, the former head of Goldman, was George W. Bush’s Chief Secretary to the Treasury.

The head of Goldman, Lloyd Blankfein is a pious man. He says he’s just a banker, “doing god’s work.” There’s another point of view. It’s difficult to disagree with Matt Taibbi who described GS as, “A great vampire squid wrapped round the face of humanity, relentlessly jamming its blood funnel into anything that smells like money.”

It’s not just GS. Lehman Brothers, being pursued by the authorities beyond the grave, are in trouble for sharp practice they got up to. Repo 105 sounds like a position from the Kama Sutra. In fact it is a scam used by the bank to show they had more money in their vaults than they actually had. By calling what was really a swap a ‘sale’ Lehman were able to conceal how much they had really borrowed out and how overstretched they were. Although Lehman had in effect borrowed tens of billions of dollars in these transactions they didn’t let on they had to pay it all back. In the end reality caught up with them and they went bust in 2008.

And countries, too, got dragged in. It was Icelandic banks that played the casino. But it was the Icelandic people who ended up paying the bill. A 2,000 page official report accuses the now bankrupt Icelandic banks and the regulators of “extreme negligence”. It points out that by mid 2007deposits in Landsbanki’s UK branch was £5.5bn, and goes on, “In light of the fact that the foreign currency reserves of the Central Bank of Iceland were only £1.2bn at that time, it may be viewed as certain that the Central Bank would not have been able to act as a lender of last resort to Landsbanki if that proved necessary.” So the Icelandic banks were in above their necks. Once again the sheriff seemed to be in cahoots with the bad guys.

This is serious. The banks seized up in 2008. We now find the activities they were involved in were (at least) borderline criminal. But the world economy came to a juddering halt as a result. Millions lost their jobs and many their homes. The banks have enormous power in a capitalist economy. The present revelations make the case for bank nationalisation overwhelming.