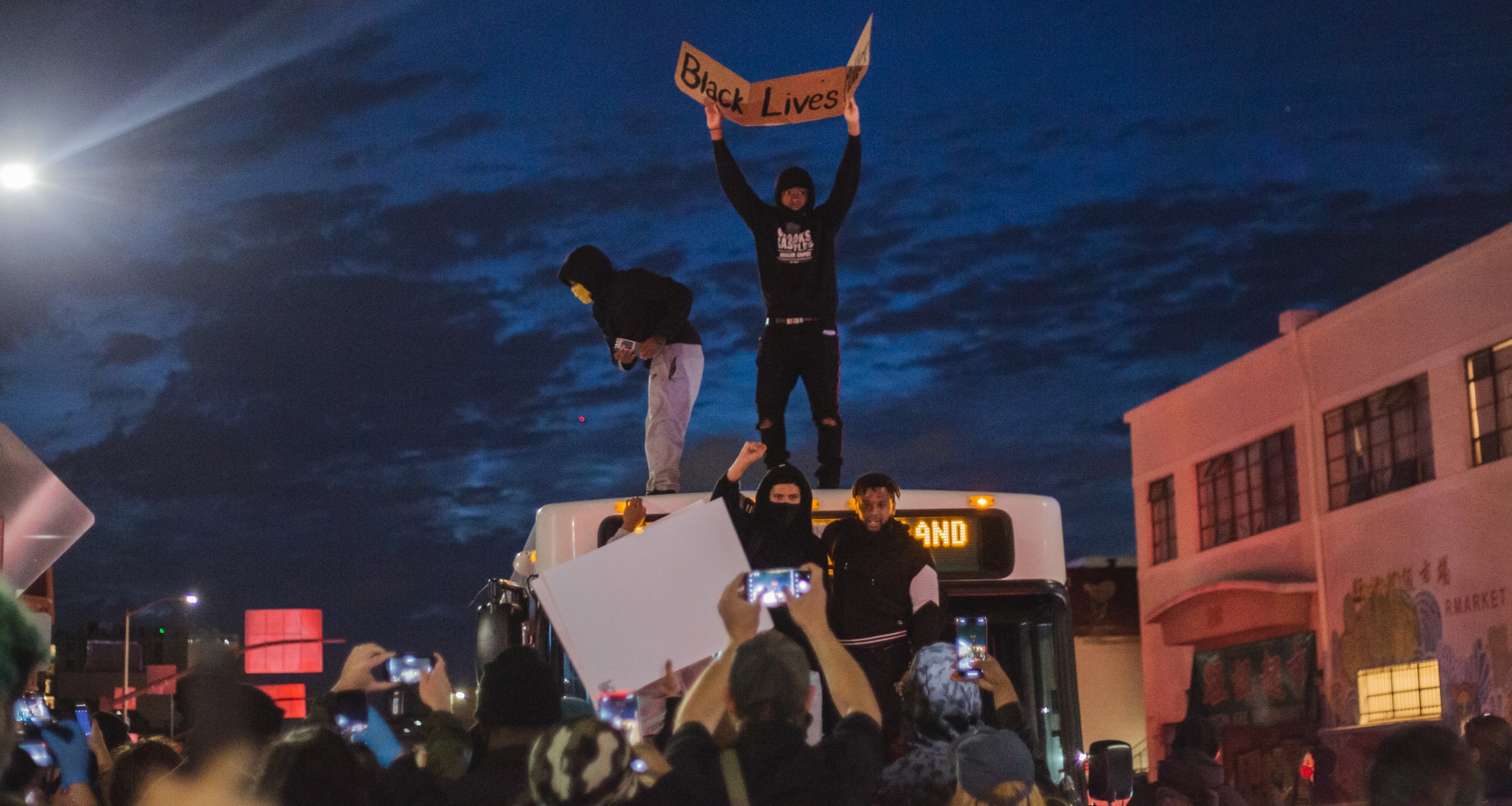 The police murder of George Floyd—an unarmed black man, who was handcuffed by four police officers in Minneapolis before being choked to death—has unleashed a wave of protests across the country, escalating out of control in several cities. Following the murders of Ahmaud Arbery and Breonna Taylor, this latest in an endless string of police killings was the straw that broke the camel’s back, unleashing a tsunami of pent-up fury at all the injustices in American society. Necessity has been expressed through accident – although Floyd’s murder was no accident.

In Minneapolis, the police used anti-riot weapons (tear gas, concussion grenades, etc.) against peaceful protesters, which only provoked a less-than-peaceful response. The police eventually had to evacuate the third precinct (where the killer cop had been stationed) in the face of a furious crowd, which proceeded to burn it to the ground. The scenes of police fleeing the precinct station, with patrol cars smashing through the parking gates to escape, were reminiscent of the evacuation of the US embassy compound in Saigon. In the face of the enraged masses, US capital’s armed bodies of men were forced to run for their lives.

Watch our US comrades' livecast

After five nights of mass protests in Minnesota, a curfew was declared by the mayor – which was immediately broken by protesters. The protests have included arson attacks and looting—but there is clear evidence that much of this was orchestrated by police agent provocateurs and far-right extremists in order to justify even harsher repression. Crowds gathered outside the fifth police precinct, threatening to burn it down as well. The precinct is now defended with barricades and armed officers on the rooftop.

The National Guard and State Troopers are also on the streets of Minneapolis, trying to enforce the curfew and regain control of the situation. At first, 500 National Guard troops were called by Minnesota Governor Tim Walz, but this has already been increased to 1,700. The US Customs and Border Protection services have also used an unmanned surveillance drone to gather information on the course of the protests.

This is the moment Minneapolis police abandoned, fled the police precinct during the protests for #JusticeForGeorge - minutes later the precinct went up in flames pic.twitter.com/thYDXBThLe

While Minnesota remains the epicentre, protests have spread to at least 22 cities. In Detroit, there have been big demonstrations, and a 19-year-old protester was shot dead in a drive-by attack, likely perpetrated by a right-wing vigilante. In New York City, there were clashes with the police when protesters defied a demonstration ban in place due to the COVID-19 lockdown, and a police van was set on fire in Brooklyn. In California, highways were shut down in Oakland, San Jose, and Los Angeles, and protesters attacked police patrol cars.

In Atlanta, police cars were also torched, and a state of emergency has been declared, with the National Guard also deployed on the streets. Protesters clashed with police officers outside the CNN building which also houses a police precinct.

In Washington DC, the White House was briefly locked down, and there were struggles between demonstrators and the secret service over barricades into the early hours of Saturday morning. And in Phoenix, protesters marched for Dion Johnson, a 28-year-old black man who was killed by an Arizona Department of Public Safety officer in a “struggle”, for which details are scant.

Similarly, in Louisville, there were large protests following the separate police killing of Breonna Taylor: a 26-year old black medical technician who was shot in her own apartment while sleeping. The police were pursuing a drugs warrant against a man who did not live in her apartment – and, as it turned out, had already been arrested. When police entered Taylor’s apartment unannounced, her boyfriend fired a gun in self-defence. In response, the police fired more than 20 shots: eight of which struck Taylor. In response, angry crowds set the Hall of Justice on Fire.

The clumsy and vicious reaction of the state is only pouring petrol on the flames. In a particularly hapless demonstration of the inherent racism of the police, a CNN team fronted by a black Latino journalist was arrested live on air by the police as they were filming the protests in Minneapolis. Meanwhile, another news team fronted by a white reporter was allowed to film the same demonstration. In Louisville, the police used tear gas against the crowd and fired rubber bullets at a journalist as she was on the air.

"this ain't a riot, it is a revolution" Minneapolis outside the police precinct (via @bgutenschwager ) #MinneapolisUprising pic.twitter.com/TI9nR0slMU

Notably, the crowds of protesters are black and white, and mostly youth: similar to the peak of the Black Lives Matter movement. The political mood, however, is more advanced than last time around, compounded by the economic catastrophe that has befallen tens of millions of Americans. Back then, there was a lot of discussion about how to make police more accountable: mandatory body cameras, community review boards, etc. None of this went anywhere and nothing was solved. In fact, the rate of police murders of unarmed black people has only accelerated over the last six years. Now, protesters have burned down the police precinct – a de facto act of insurrection. In Minneapolis, organisers have declared: “this ain’t a riot, it’s a revolution!”

The significance of this movement, and the dangers implicit in it, have not been lost on the ruling class. As the Washington Post wrote: “the tumult, set in the broader context of the twin health and economic emergencies, could mark a rupture as dramatic as signature turning points in the country’s history, from the economic dislocation of the Great Depression to the social convulsions of 1968”. 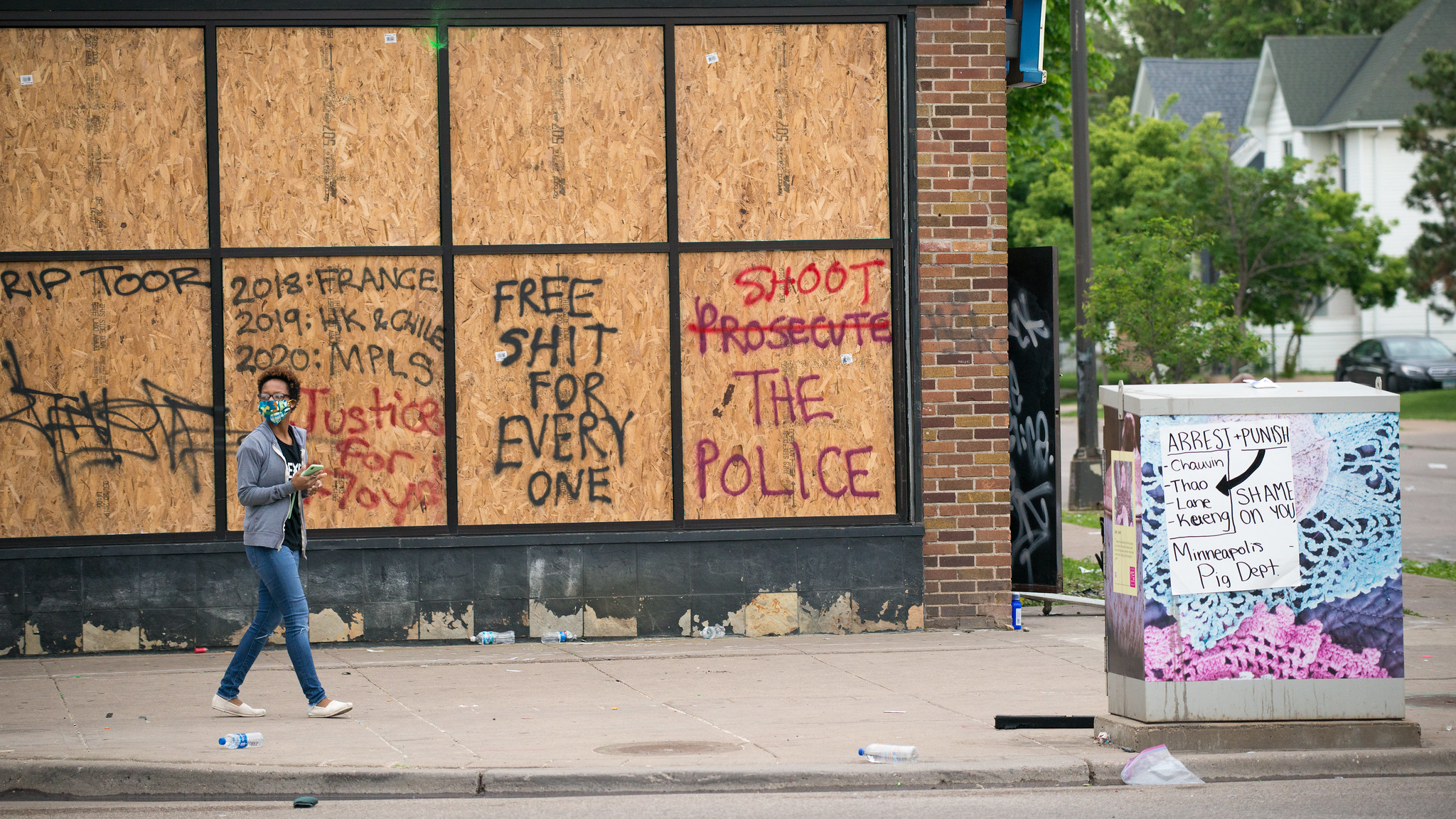 This movement expresses the pent-up rage that has accumulated in American society / Image: Fibonacci Blue, Flickr

These scenes are certainly not normal in the US. If you watched the videos without context, you’d be forgiven for thinking this was happening, not in the world’s foremost imperialist power, but in Chile, Lebanon or Algeria. What we are seeing is a spark triggering an explosion of anger that has been accumulating for a long time, intensified by the latest crisis provoked by the coronavirus pandemic. There are comparisons to be drawn here with the self-immolation of Mohamed Bouazizi in Tunisia, a single event that triggered the Arab Spring, which lifted the lid on the boiling anger at a thousand and one injustices that had accumulated across the Middle East and North Africa.

The bourgeois press is running rolling coverage of property destruction and looting in an attempt to turn public opinion against the protestors. Mayor Jacob Frey in Minneapolis gave an insulting, hypocritical speech today, chiding the protestors by saying: “There is no honour in burning down your city. There is no pride in looting.”

But the organised working class is showing solidarity with this expression of popular rage. For example, unionised bus drivers in Minneapolis have refused to collaborate with the police, who wanted to use their vehicles for mass arrests of the protesters. The same thing happened in New York, where a bus driver walked out of his vehicle after the police had commandeered it to transport those they had arrested.

NYPD commandeered a city bus for prisoner transport. The driver steps off the bus and refuses to drive it. Crowd cheering. #Brooklyn #BarclaysCenter #BlackLivesMatter #GeorgeFloyd pic.twitter.com/4F9IZ3sfDI

Typically, Trump is inflaming the situation even more. In a transparent attempt to whip up his reactionary base of support in advance of the election, he threw his support behind the forces of law and order. He tweeted that the protestors are “THUGS” who “dishonour the memory of George Floyd.” He added, “when the looting starts, the shooting starts”, quoting the notoriously racist Miami Police Chief, Walter Headley, who uttered these words in 1967.

This is not an idle threat. Even before coronavirus upended everything, the US ruling class had been bracing itself for escalating civil unrest as the crisis of capitalism deepens. It will use any means necessary – both official and extrajudicial – to maintain its power. In addition to police brutality, there have already been instances of right-wing vigilante violence against protesters, for instance, a drive-by shooting in Detroit.

Protests have swept across multiple major US cities, with crowds taking to the streets to demand action on police brutality.

In Memphis, signs were held for black Americans who had recently been killed -- George Floyd, Ahmaud Arbery, and Breonna Taylor. https://t.co/5ZtZGoZwKR pic.twitter.com/nZXVF66dnQ

Following a rare order from the Pentagon, military police and regular troops have been put on alert in several bases. Soldiers from Fort Bragg in NC, and Fort Drum in NY have been ordered to be ready to deploy within four hours if called upon. These forces would be used under the Insurrection Act of 1807, which gives the president the power to deploy federal troops in any state to suppress “any insurrection, domestic violence, unlawful combination, or conspiracy.” The last time this law was invoked was in 1992 in order to quell the uprising in Los Angeles sparked by the acquittal of the police who beat Rodney King.

But far from beating the masses down, the whip of counterrevolution often drives them forward, as we saw in the numerous protests that swept the world last year in Chile, Colombia, Lebanon etc.

It is worth remembering that in 2008, during the Republican National Convention in the small city of St. Paul, MN, they had to bring 50,000 police in from around the country to contain the protesters, and even then they could not control them fully. The ruling class doesn’t have enough cops—or troops—to hold down the entire country.

The fact that Derek Chauvin (the police officer who murdered George Floyd) has been fired and charged with third-degree murder and manslaughter has done precisely nothing to quell the protests. The masses have been here before. The problem is not one or two “rotten apples”, but the whole, rotten system.

It’s not enough that George Floyd’s murderers have been “separated from employment” and that one of them has been charged. To achieve genuine justice for all those exploited and martyred by this system, the capitalists must be “separated from ownership of the means of production.” The labour movement should link up with the protestors, and together grow this movement and put it on an organised basis. What is needed is a programme and plan of action to fight for the root-and-stem transformation of society. Only socialist revolution – in the US and around the world – will finally put an end to the vicious cycle of exploitation and oppression.

Read our US comrades' last article on the George Floyd protests