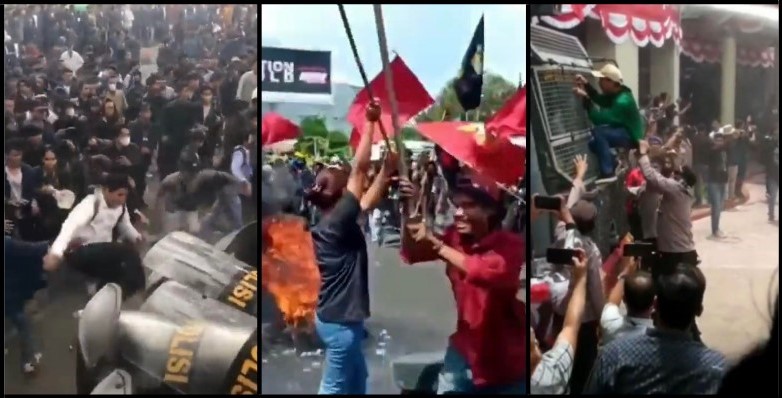 After weeks of speculation, the rumour that a fuel price hike was coming was finally confirmed. The working class was hit with a 30-percent price rise. Starting on Saturday 3 September, the price of petrol shot up from 51 cent to 67 cents per litre, and diesel fuel from 35 cents to 46 cents per litre.

This announcement by the Jokowi government was immediately met with mass demonstrations that have spread from city to city. Tens of thousands of demonstrators took to the streets across many cities. In some, violence broke out. Everywhere, people are indignant and explosive class struggle is being prepared.

In Jakarta, thousands of students and workers have taken to the streets. They have been demonstrating for days since the announcement. On Friday, the masses tore down the police barricade and clashed with security personnel.

A mass demonstration in Palembang was met with tear gas and water cannons from the police as the masses attempted to enter the parliament building. A number of students deemed ‘provocateurs’ were arrested by the security forces. In another part of the city, demonstrators tried to stop the motorcade of vice president Ma’ruf Amin, who was on his way to the airport. The vice president came extremely close to facing the wrath of the masses before being ushered to safety.

In Semarang, more than 1,500 people rallied at the office of the governor of Central Java. Although the rally blocked the main traffic of the city for hours, it was greeted with support by the locals. “I supported [this demonstration], the fuel price is high now. If the situation remains like this, our expenses and incomes are not balanced. Our wages stay the same, but prices of necessities are all increasing,” said one worker in an interview.

These are a few samples of the events that have erupted across Indonesia in the past week. Students, workers, and peasants spontaneously formed organs of struggle to organise their actions. Standing at the forefront of this struggle against the fuel price increase are the youth, which is a testimony of how today’s crisis of capitalism is first and foremost radicalising young people.

Protests in Indonesia are continuing to surge. The public is enraged by soaring energy costs. Take a look at the scene:pic.twitter.com/dlK5xPNv1l

The demonstrators have vowed to continue their mass actions into the next week. In Jakarta, on Monday 12 September, workers and students’ organisations are launching bigger mobilisations than the previous week. The demonstrations across Indonesia are escalating from day to day.

Since the war in Ukraine and the ensuing oil and gas price increase, the Indonesian government has been overwhelmed by the cost of the fuel subsidy, which has spiralled out of control. This has been exacerbated by a weakening Rupiah. The fuel subsidy has shot up this year to more than Rp 500 trillion ($33.7 billion), which is more than three times the originally allocated budget of Rp 152.5 trillion ($10.1 billion). This has created a large deficit that is putting the government’s international credit rating at threat. For creditors, a large deficit to subsidise the poor is not considered a ‘sound’ investment. Feeding the poor is not a profitable affair. Creditors and investors only lend money when they have a guarantee that doing so will facilitate making a profit.

International rating agency Fitch, in their recent analysis of Indonesia in June 2022, gave the country a credit rating of BBB (medium quality credit), with some notes. Indonesia was considered to have a “High Subsidy Burden”, particularly from “significantly increased subsidies to shield households from high international oil and food prices, allowing for unchanged domestic prices for the most used types of subsidised fuel.” In other words, to maintain or improve their credit rating, the government must cut down social subsidies because they are not profitable for the capitalists.

From the point of view of the government, a higher credit rating will allow for bigger debts and lower rates. Therefore, the government must create a better investment climate: enacting labour laws that are more investor-friendly, loosening up environmental protection regulations, and implementing a more ‘responsible’ fiscal and monetary policy. Fuel subsidies for the working people are not regarded as ‘responsible’ fiscal policy. On the other hand, if the state runs a budget deficit due to infrastructure projects, benefiting the capitalists, or if they offer stimulus to corporations, this is deemed a ‘responsible’ use of the budget.

The government has tried to explain away the fuel price increase as a way to improve a flawed subsidy mechanism. With the magic of government statistics, people were presented with figures of a fuel subsidy mainly enjoyed by the rich. According to President Jokowi, 70 percent of the subsidy benefits rich people. This number has been repeated ad nauseum by politicians, economists, and the mass media. The media, whose main job is to investigate the truth, never once bothered to ask the government where and how they came up with this 70 percent figure. Only Jokowi, Puan [the house speaker] and God seem to know how this 70 percent figure came about. It is true what Mark Twain once said: There are three kinds of lies: lies, damned lies, and statistics.

According to the government, ‘the poor’ are those with a monthly income below Rp 505,000 ($34). Those who make more than $34 per month would be considered ‘well-off’, or ‘rich’. With such poverty criteria, we can hardly be surprised that the government discovered that the fuel subsidy is being enjoyed by the rich!

To put a lid on the people’s anger, whilst also mobilising tens of thousands of security personnel in many cities, the government announced an increase in direct cash assistance for the poor. This is a classic tactic of the ruling class: a carrot and stick approach. This tactic might be effective in a normal period, but the period we are entering is far from normal. Today’s crisis of capitalism is unlike those of the past. This is an organic crisis of a system that is dying: it is just a step away from the grave, yet it is stubbornly refusing to die. The working class is beginning to wake up from its deep slumber and is taking up the struggle against the status quo. Even though there is a great deal of naivety resulting from inexperience, they are learning very quickly.

Another footage from the protests in #Indonesia. pic.twitter.com/IuWVJ88DTZ

If there is one obstacle to the masses achieving clarity and drawing the right conclusions, it is their leadership. The leadership of the mass trade unions have not shown a militancy and courage proportional to the anger we are seeing today from the masses. Instead, they are moderating their demands at every step. Said Iqbal, the leader of the newly formed Labour Party and the president of a main trade union federation, KSPI, demanded parliament create a taskforce to discuss the arguments around fuel price increase. “This demonstration is to demand the formation of a fuel price taskforce so that the fuel price can be lowered,” said Iqbal. What is needed is not yet another ‘taskforce’ – the kind of body that the government creates to sap the energy and militancy of a mass movement.

KSPI and many other trade union federations have millions of members. But until today, they have only managed to mobilise a few thousand workers: a fraction of their total membership. Meanwhile, polls have shown that the majority of people are opposed to the fuel price hike. In many cities, it has been the students who are at the forefront of the struggle and are taking the initiative. Even though the students have displayed exemplary courage, the student movement by itself is insufficient to defeat the government. The students do not have the one weapon that the workers possess: the power to strike. A one-day general strike would be much more powerful than days or even weeks of student demonstrations.

This fuel price increase can only be defeated by a national general strike involving not only the organised, but also the unorganised workers. This is the only language that the ruling class understands. But a general strike is not something that can just be called by the leadership without a serious will and preparation. Since the 2012 general strike, trade union leaders like Said Iqbal had repeatedly threatened general strikes, but this threat has yet to be carried out. Instead, they have opted for legal routes. In 2020, in the struggle against the Omnibus Law – a series of laws to weaken workers’ rights and environmental protections, among others – Said Iqbal repeatedly threatened to launch a general strike. But in the end, nothing concrete in that direction ever transpired. The leadership instead opted for a judicial review at the Supreme Court. The result was a big zero. Despite the verdict from the Supreme Court that the Omnibus Law is unconstitutional, the law is still in effect.

The workers no longer believe the calls of their leaders for general strikes, not to mention the ruling class, which only laughs when they hear these leaders utter the phrase ‘general strike’. As expected, Said Iqbal has one more issued the threat of a general strike: “If the government still does not lower the fuel price, still pass the Omnibus Law, and wages do not increase, then general strike, stop production, five million workers will join this [general strike] action,” said Said Iqbal. However, the workers are not like a water tap that can be turned on and off at will. Calling a general strike is not like turning on a light. Such a conception is the prejudice typical of a labour bureaucrat, who imagines that he can organise a strike through a letter of instruction.

INDONESIA: Thousands of people hit the streets of the country to protest against the increase in fuel prices with officials in front of the government Sukabumi DPRD office. pic.twitter.com/7daJtfxYFZ

The movement toward a general strike has to be prepared, but this will require a programme of escalation to stretch the workers’ muscles, which have atrophied. This cannot be achieved through ‘commandism’ from the top. This programme of escalation can be initiated by organising mass meetings and rallies in factories in order to hand back democratic control and initiative to the rank-and-file workers. These mass meetings must also draw in other unorganised workers, as well as other layers of working people, because this fuel price increase is hitting all layers of the working class. Through these mass meetings, the labour movement can free itself from the ossified bureaucracy.

All over the world the crisis of capitalism is sharpening the class struggle. Indonesia is no exception. Even though the past few years have had the appearance of stability and calm, beneath the surface there is a large, turbulent stream. Jokowi might enjoy high approval ratings at the moment, but things can change into their opposite in a heartbeat. These widespread demonstrations in the past week, though still small in scale, point to tremendous huge pressure under the surface that can quickly develop into a big explosion.