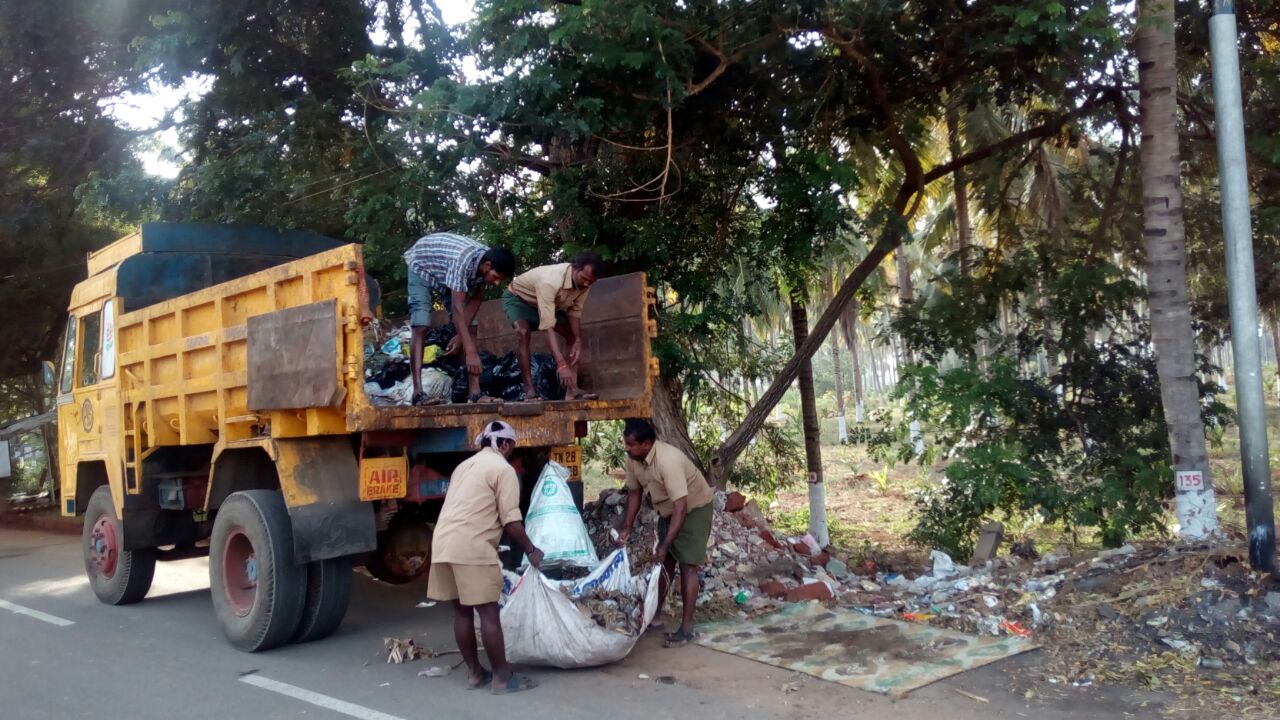 The 73 years that have passed since the transfer of power from British India to the native ruling classes of the Indian subcontinent has not alleviated the dire poverty, misery and exploitation of the vast masses of populace, and in particular the sanitation workers.

AICCTU (All-India Central Council Of Trade Unions) and its affiliated unions are at the forefront of organising and agitating for the rights of sanitation workers in many parts of the country. In Coimbatore District, the Sanitation Workers’ Union (affiliated to AICCTU) has been leading struggles, along with other unions, for the increase of minimum wages and regularisation of sanitation work, along with the abolition of the contract system of appointing workers in the Coimbatore Corporation, in addition to other legal demands.

The Coimbatore district is located in the southwestern part of Tamil Nadu, measuring 247 square miles, which is surrounded by the Western Ghats. It became a Municipal Corporation in 1981. It comprises some 100 wards populated with nearly 300,000 people including Hindus, Muslims, Christians, Kannadigas, Telugus, Malayalees, Dalits and also migrant workers from other states. It is also the second-largest city of Tamil Nadu, with nearly 25,000 small scale industries and is a manufacturing centre for textiles, pumps, motors, automotives and software, doing billions in business. Aside from that, it is also an education and healthcare hub of Tamil Nadu. It has long been ruled by the Dravidian parties (tracing their lineage to the social democratic, Tamil nationalist and anti-caste Self-Respect Movement of the 1970s). presently it is ruled by the All India Anna Dravida Munnetra Kazhagam (AIADMK)-led government of E. Palanisamy, after the death of Jayalalitha. It is a corrupt government implementing anti-people policies like the hydrocarbon project, privatisation of all sectors, receiving commissions for government contracts, and an eight-way lane project from Salem to Chennai, which would expropriate the land and livelihoods of millions of people. It is a government serving the interests of corporations and amassing wealth at expense of people’s lives.

Coimbatore is one of the most industrialised cities in Tamil Nadu and has a vast population of workers. The Coimbatore Corporation has been kept clean only because of the conservancy workers. There are some 2,520 permanent workers and 2,300 contract workers. There are only 5,000 sanitary workers where nearly 15,000 workers more could be appointed by the Coimbatore Corporation. This has been one of the demands of the trade unions like AICCTU. The permanent workers earn a starting salary of Rs.20,000 ($261 USD) a month - whereas a contract worker is given only Rs.300 (about $4 USD) per day. Until 2016, the contract workers were only earning Rs.100 (about $1 USD) per day, but due to the struggle of workers it has been raised to Rs.350.

Sanitation workers start from 5.00am to 11.45pm, and 3.45pm to 5.45pm. Most of them work part-time in their leisure hours. In 2018, the state government passed a general order stating that the minimum salary of sanitation workers was Rs.16,000: the G.O. has not been implemented until now. The contract workers are recruited by Vardhan infrastructure and other areas, which are under the jurisdiction of S.P. Velumani Rural Development and the Municipal Administration of the Minister of Tamil Nadu. The contractors have no license to recruit anyone. The contractors will be paid by the Coimbatore Corporation. Thus the workers will be at the mercy of unlicensed contractors, which will gain millions of rupees from the wages of these workers. The wages given to the contract workers are well below the amount guaranteed under the Minimum Wages Act of 1948. Moreover, most of the men and women contract workers have been working for more than 10 years, and the Contract Work Abolition and Regulation Act (1970) bans appointing contract workers in perennial employment. So they should’ve been given full contracts by now.

Meanwhile, the Coimbatore Corporation invited applications for 549 sanitary grade one workers (permanent workers) in 2019, for which nearly 7,000 engineers, diploma holders and other postgraduates have applied. This notification by the rural and municipal administration ministry of the AIADMK-led government has taken the contract workers by surprise because they had been demanding appointment as permanent workers based on seniority and due to the perennial nature of their work. There were attempts by some trade unions to obtain a stay of the government notification before Madras high court, while unions and workers sought a repeal of the G.O by the District Collector and Corporation Commissioner. This was ignored, and the corporation appointed 329 workers from the 7,000 applications. The contract workers resisted the action of the corporation with a strike, in which nearly 1,000 contract workers picketed the Coimbatore Corporation. The workers struck for three days in the second week of March 2020, which led to negotiations between the trade union leaders, workers, corporation officials and district government. In the meeting, it was agreed that the contract workers would be paid a Rs.550 daily wage as per the G.O. passed by the government in 2018, and so the contract workers withdrew their strike. AICCTU, led by its district president Dhamadoran and its executive committee member Santhanam Balasubramaniam played a vital role in organising the workers.

But the contract workers have not received the agreed daily wage of Rs.550. It was another false promise by the government to defeat the struggle of the workers. The sanitation system will be jeopardised without the help of contract workers in a vast city like Coimbatore. They are the ones who work during epidemics and floods in other parts of the state. This has been the condition of sanitary workers all over the country. They earn salaries below the 1948 Minimum Wage Act. The Modi government, despite cooking up schemes like swaach bharat (clean cities), has not been able to alleviate the poverty of contract sanitation workers. The Central Government, led by the BJP, has accelerated the neoliberal policies of previous governments by reducing state intervention in the economy, and privatising sectors like sanitation, limiting the government’s role to only maintaining law and order.

Now, the COVID-19 pandemic has only aggravated the plight of sanitation workers. Apart from the economic crisis, they have to clean the cities and work when the whole country is staying at home. They will not be able to work as part timers during leisure hours. They will be at risk of infection.

When asked about this situation, Comrade Santhanam (one of the workers and executive committee member of Coimbatore District Sanitation Workers’ Union) said that the government has provided protective equipment and has conducted tests for coronavirus in the contract workers. But the contract workers were not given the salary of Rs.550 per day agreed by the authorities, nor the additional wages for the days worked during the coronavirus lockdown in March. They were paid only a salary of Rs.9,500, even though the lockdown started from 24 March. He also said that the sanitation work was being done by one community predominantly in all parts of India: Dalits (‘untouchables’ as per Hindu caste society) and where once they were treated by the government and civil society in an appalling manner, now they are treated as Gods. The people in some wards of Coimbatore Corporation city clean their legs with water during this coronavirus pandemic due to their dangerous work. Apart from the change in attitude by the civil society and government, we also need their support in living a life of dignity (i.e permanent employment and minimum wages of Rs.26,000). The contract workers used to work part time during leisure hours, due to their low wages. But now they are unable to do so due to the lockdown, which has also added to their economic woes. He also said that, in developed countries, the sanitation workers are treated in a dignified manner in terms of available technology and their salary. Here in India, manual excavation is still prevalent in many parts of the country.

The world capitalist system and economy have been in recession since 2008 and will see a further recession due to this pandemic. The AIADMK government will not have diluted the struggle of sanitation workers by not fulfilling their demands. After the situation returns to normal, the economic impact of the pandemic will lead to another wave of struggle by these sanitation workers, with much pace and vigor, which will ultimately lead to the conquest of their demands.

Regularise the work of all the contract sanitation workers!

Expropriate the contractors’ wealth and pay the arrears to the contract workers from 2018!