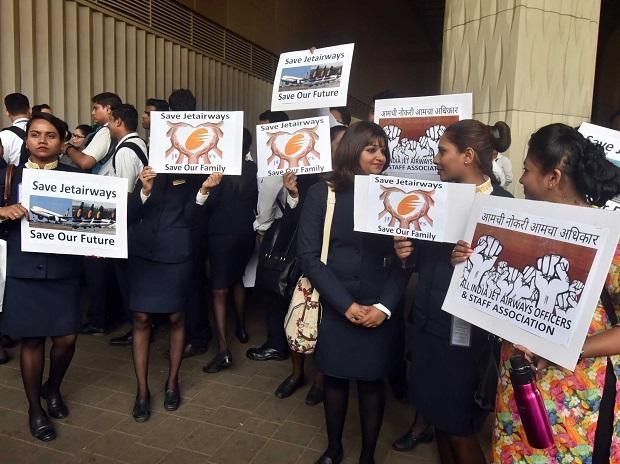 Jet Airways private airline services were suspended on Wednesday 17 April. The private airline was owned and run by Naresh Goyal from 1993, serving domestic and international destinations. In a fortnight’s time, it would have completed 26 years of service.

The airline has been suspended due to financial difficulties. It also couldn’t get necessary the support from its lenders. The State Bank of India, one of the largest banks in the country, has refused to offer further loans to the airline. Jet Airways shares plunged 32.23 percent, closing at Rs.163.90, down from Rs.650/- on the BSE on Thursday last week.

Those who suffer the most as a result of this decision are the 16,000 employees of the airline and the nearly 100,000 households that depend on it. The workers organised protests in Mumbai and Jantan Mantar, Delhi. A Delhi-based airport worker’s daughter has organised an online campaign addressed to the prime minister of India to save the workers’ jobs. There has been huge support for the solidarity campaign; in one day nearly 50,000 signed the online petition.

Airline workers’ salaries have not been paid for the past four months and this decision will severely affect their families. Right-wing economists in India have also been demanding privatisation of the government-owned Air India Airlines. Other than Air India, airlines in India are privately owned and most of them (like Kingfisher/Air Deccan) were closed due to financial problems and mismanagement by their private owners, not because they were government controlled.

Privatisation and liberalisation cannot be the solutions to the problems of the industry. This would only serve to increase the anarchy of the market, capital accumulation for a minority, while also resulting in employee layoffs. The mismanagement in presently state-owned nationalised industries could be solved by genuine planning under the democratic control of workers.

We extend our solidarity and support to Jet Airways workers and demand that the government nationalise Jet Airways, protect workers’ jobs and their families’ interests and pay all unpaid wages.