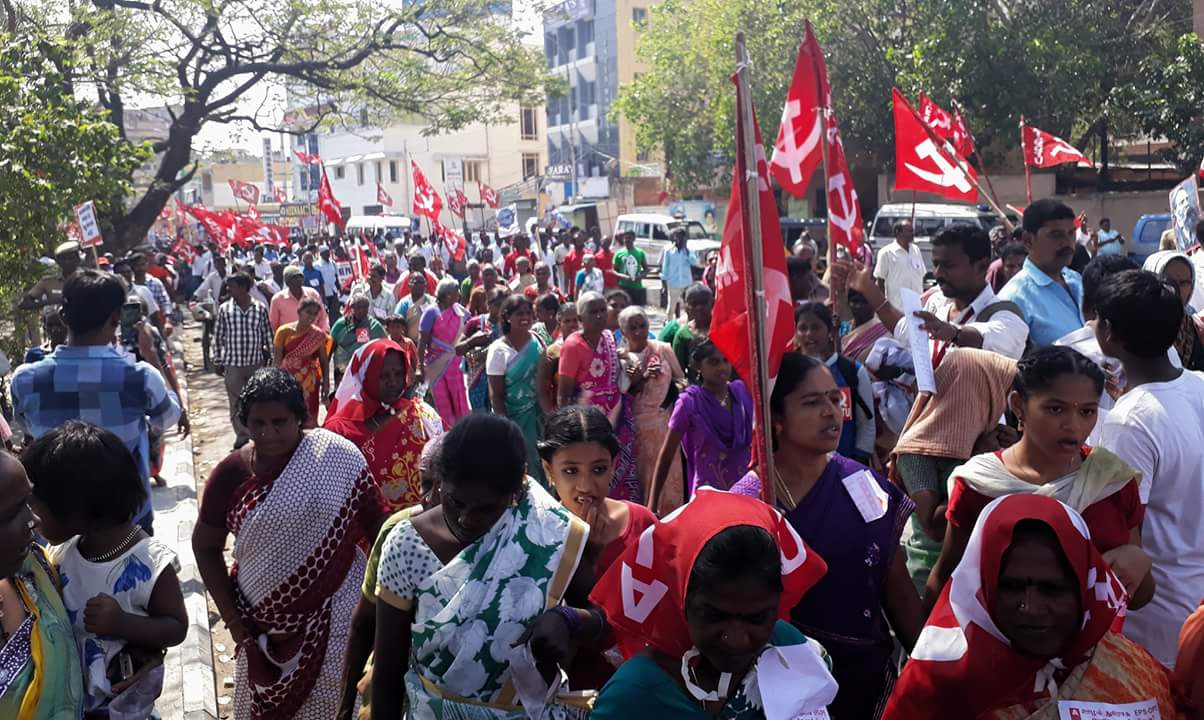 Indian workers face illegal pay cuts and layoffs at the hands of their unscrupulous bosses, working hand-in-hand with a yellow union. Meanwhile, the regional and central governments are using the COVID-19 crisis as cover to sneak in attacks on the working-class. Defend wages and workers’ rights!

Pricol Limited is an automobile component manufacturer located at Periyanaickenpalayam, part of Coimbatore District in the southern state of Tamil Nadu. It was founded in 1974 and is a multinational, with six manufacturing plants in India, one in Indonesia and one in Brazil. It has some 2,500 permanent workers and 3,500 contract workers in its Pricol plant. Aside from this, it has other arms like Pricol Properties and Pricol Logistics.

Coimbatore is an industrial city and second-largest in Tamil Nadu. It has a huge base of industrial workers. Numerous textile mills and engineering industries contribute to the numerical strength of the workers in Coimbatore. The working class has played an historic role in the struggle for freedom, and against exploitation through meagre wages in the textile mills. Communists played a vital role in these struggles. It is said that, during May Day gatherings until the early 1990s, Coimbatore would turn red, with scarlet flags flying all over the district.

After the 1990s and the implementation of neoliberal policies there was a period of lull in the trade union movement in all over India, including Coimbatore. Due to betrayals by the leadership of Stalinist unions, and those of bourgeoisie parties like Congres, the workers of the Pricol plant opted for new leadership under AICCTU (All-India Central Council of Trade Unions) from 2007. There were historic struggles for many years. As of 2007, Pricol workers earned only Rs.7000 (about USD$91) per month, even with permanent contracts and years of experience. These were very low wages in those times. After serious militant struggles, led by the AICCTU, the union was recognised and now the workers are in a better position, earning Rs.30,000 a month (about USD$390.05).

After 2017, the Pricol bosses started a new attack against the AICCTU-led union and its members. Nearly 302 frontline workers in the union were dismissed, without any due process, for seeking higher wages. In their place, 100 contract workers were employed on low wages by the Pricol bosses, thereby making huge profits. After dismissing the frontline workers, the bosses started threatening the remaining workers to force them to sign an agreement with a management-supported trade union affiliated to AITUC (All-India Trade Union Congress), which is under the influence of the Pricol bosses. The management-supported union signed a settlement with the Pricol bosses for six years. It was not a tri-party agreement, unlike the previous instances. There is no guarantee the bosses will implement it.

The Pricol bosses, like other corporates in India, have the support of the bootlicking governments in India and in Tamil Nadu. They have started attacking the hard-earned rights of workers. During this COVID-19 pandemic, the government of India has given guidelines to pay workers their full wages during the period of lockdown. But not following the guidelines of the government, the Pricol bosses sent a circular deducting 30 percent of the workers’ wages from March to July. It was stated that the reason for the deduction was a loss of profits due to this pandemic all over the world, and other reasons relating to changes in technology. This deduction is illegal under the Payment of Wages Act of 1936.

When questioned about this, a dismissed worker and leader of AICCTU, Mr. S. Balasubramaniam, said the Pricol bosses’ statement about a loss of profits is false. The Pricol plant has actually enriched its wealth through low wages and exploitation of its workers since 1974. It has a lot of reserve money, and the statement is a ploy by the Pricol bosses to take the plants back to old days where workers were given meagre wages and treated like slaves. He also said that the lockdown will be over by 20 April or 3 May, so why should the Pricol bosses deduct 30 percent of wages if the workers maintain full production and meet their targets? He said that, 20 years ago, the Pricol Management cut 10 percent of workers’ wages “for a period of a few months”, and promised they would be given back after a recovery, but the deducted wages were not given back.

He also said that the Pricol bosses are attacking workers’ rights with the assistance of a management-sponsored trade union. It has no support among the workers. He said the government of Tami Nadu must conduct elections through a secret ballot to decide which trade union will represent the workers. He also added that, if Pricol is making losses, the government should take over the establishment and let the workers organise the production according to workers’ control. The Pricol Ltd. bosses have no right to carry on in their position after violating the law.

Employers are obliged to pay wages during Lockdown

Pricol Management cannot invoke the “no work: no pay” principle here. A 29 March central government order makes it clear that the deduction of wages during the lockdown will be construed as a legal offence. This order was passed citing the National Disaster Management Act of 2005. Non-compliance with orders is punishable with a fine and imprisonment under that same Act.

Nearly 400,000,000 workers are affected all over India due to this unplanned COVID-19 lockdown, carried out by the Modi government. It has led to an economic disaster in the country. Many small and medium scale industries, and big corporates like Pricol, are carrying out wage cuts, lay offs and retrenchments. Modi is also intending to extend the working day from 8 to 12 hours through the backdoor during this period, as per the recommendations of senior bureaucrats of industry. The government has provided an economic package equivalent to $USD22bn, which is very little considering the population of India. The Modi government and other capitalist governments are unable to solve the problems arising from this pandemic, and are putting the burden on the shoulders of the working class by attacking their rights. The coming period will only sharpen the struggle between capital and labour, not only in the Pricol Plant but also all over the subcontinent.

We demand that the state and central government: