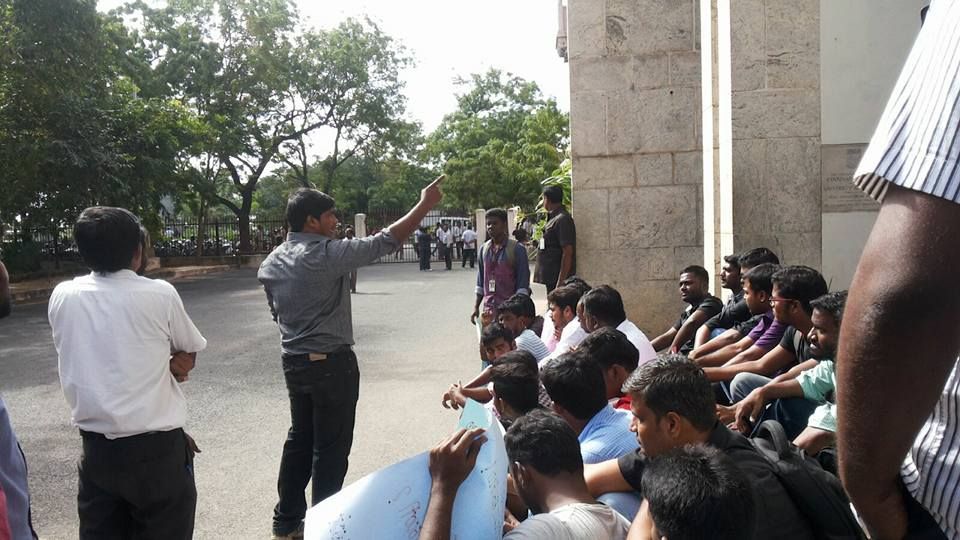 We have received the following report of a struggle at Madras University in India.

Madras University is one of the oldest universities in Chennai. It was established in 1857. The University offers teaching and research programs across its four campuses. The 68 University Departments of study and research are organized into 18 Schools each of which offer Post Graduate Courses in respective specialization, part time and full time Ph.D. Programs, Diploma and Certificate Programs. The Indian government has recognized the university schools as centers of excellence but in reality an undemocratic atmosphere prevails throughout the university. It still has all of the colonial hangovers prevailing over it. Students and scholars are harassed by the department heads. This practice prevails in almost all educational institutions in Tamil Nadu and across India. The C.B.C.S (Choice Based Credit System) which has been introduced at university, has enslaved the students even more. 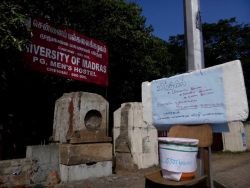 From November 20 to December 10 Chennai faced unprecedented floods during the North East Monsoon. The situation was aggravated due to the release of 30,000 cusecs (1 cusec = one cubic foot per second) of water from Chemberambakkam Dam up to 10 p.m. on Dec 1 without any prior warning. This led to severe floods. It is officially estimated that more than 400 people died due to this negligence and affected people faced losses worth billions of Rupees.

On December 15 the University of Madras conducted a seminar on Disaster Management. It was presented by Dr. Jyothi Nirmala, a government (I.A.S) officer. In this seminar Jonas, a student of M.A Political Science and French citizen of Sri Lankan origin, spoke from the floor. He commented that the speakers were only talking about the relief work and achievements of the ruling ADMK government but there has been no discussion about the reason for the floods. He also said that, apart from the government, students played a huge role in the relief work that took place. The student was silenced by the organizers and later, when he moved out of the seminar hall, he was beaten severely on his head and other parts of his body by three assistant professors and 10 non teaching staff. Jonas’ friends who came forward to question this criminal act were beaten, abused and forced out of the university by 300 non teaching staff under the direction of the registrar and chancellor of the university.  The registrar Dr.David Jawahar is the son of former C.P.I Tamil Nadu State Secretary T.Pandian.

Strike and boycott of classes on December 16 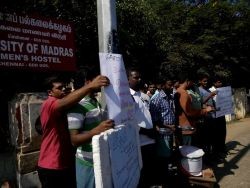 Against this brutal assault on the fundamental rights of students we have boycotted the semester exams and picketed the university, stopping all movement in and out of the university by 10 a.m on December 16 . It was a militant strike which has never happened before in such a manner at the university. Slogans for justice and action against the university officials echoed all around the campus. There were clashes between the students and non teaching staff, who were supported by the police. 42 students were arrested later on that day whilst the media were stopped from entering the campuses.

The university, under the pressure of striking students, declared I.T.C (Indefinite Closure of College) and the postponement of exams. This was done in an attempt to defeat the striking students by announcing the closure of the university and hostel but the students refused to vacate the hostel and continued their sit in strike until their demands were met. The management  shut off electricity and water to the hostel which is used by students from all over. Not only south Indian students but also students from north India, north east India and International students as well are living at the hostel. 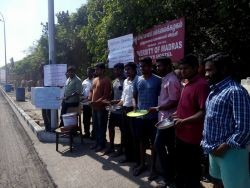 Students, who were left with no electricity, water or anywhere else to go, continued the strike until December 19 while looking for solidarity from the people of Madras. With empty plates they went to Marina Beach Road and spoke to the people, exposing the high handedness of the university officials towards the students.

With the building of support in the local community the university at last relented and decided to negotiate with the students. 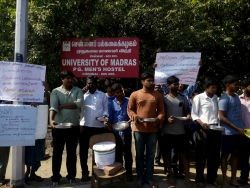 On 21 December there were negotiations between the student leaders and the registrar of the University of Madras. The student leaders stood firm with their demands for campus democracy and action against the brutal professors and non teaching staff. The management agreed to the demands of the students to recognize student associations inside campuses and gave assurance to form a committee of enquiry to investigate and prosecute the brutal university officials who attacked Jonas. This long sought victory for the students is an important mile stone for building student associations in this university. Now the students in jubilation are preparing for the founding conference of their new general student association.