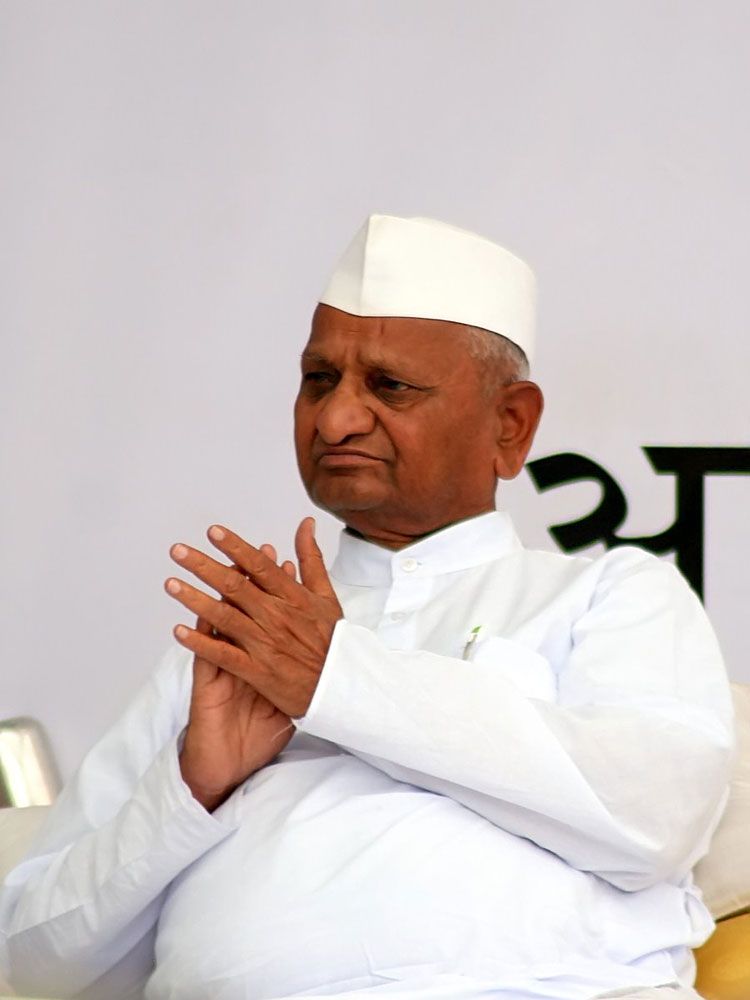 Societies seething with discontent and deprivation erupt in most peculiar ways. In India’s egregiously unequal society, the recent upheaval, if at all it can be called that, around the right-wing conservative social activist Anna Hazare shows the malaise that has set in in this largest democracy in the world with one of the fastest growing economies.

A majority of the urban ‘masses’ are from the middle class, which sprouted after the collapse of the Keynesian model of capitalism and the introduction of trickle down or “neo-liberal” economics at the end of the 1980s. The person credited with and glorified by the imperialists as the pioneer of this economic change is no other than Manmohan Singh, the incumbent prime minister of India. This resulted in an unprecedented rise in inequality and socio-economic polarisation. While this middle class has reached a substantial figure of more than 160 million, the destitute in India are more than a billion. This petit bourgeoisie is in turmoil and extremely perturbed by a life of cut-throat competition, price hikes and unemployment. It goes after superficial and pragmatic issues in its impatience as a class to find some respite. Its political representation these days is called “civil society”, with a pragmatic policy to reform a system that is historically obsolete and economically redundant.

The present movement against corruption is supported by this civil society and the NGOs that are sponsored by Coca-Cola, DFID, the British Council, World Bank, USAID, Lehman Brothers, the Ford Foundation and other national and international corporations and billionaires. The dominant corporate media has converted tens of thousands of these petit bourgeois urbanites into hundreds of thousands to suit its bosses. Anna Hazare himself supports Raj Thackeray’s ‘Marathi Manoos’ xenophobia.

He banned alcohol in his native Ralegan Siddhi in Maharashtra and those who dared to drink were flogged. He has heaped admiration upon the BJP’s Nitish Kumar in Bihar and the neo-fascist Narendra Modi in Gujarat. His connections with the Hindu fundamentalist Rashtriya Swayamsevak Sangh (RSS) have been recently exposed.

However, the most insidious element in this and other civil society movements is the blatant class collaborationism and ideological capitulation. There is a striking analogy between the present movement in India and the lawyers’ movement in Pakistan. In both of these civil society movements, we see the tapering off of the ideological conflict between the left and right and a despairing acceptance of the present rotting system and the state. In Pakistan we saw conciliation between the Jamaat-e-Islami and other right-wing parties with the so-called left parties for the restoration of a similar individual as Hazare and an institution that was and is a pillar of the despotic state apparatus. It was a movement to cut across the looming movement of the ‘uncivil’ society, i.e. the working classes and the youth. But it still erupted with a vengeance in the autumn of 2007. Two years after the restoration of the deposed judiciary, justice is much dearer and elusive for the vast majority of the people, the poor and the oppressed. The Supreme Court takes suo motu notice of two bottles of Atiqa Odho’s liquor while millions are dying from hunger, poverty and disease. Lawyers from the very same movement showered rose petals on Salmaan Taseer’s bestial assassin. Any movement not based on class struggle is doomed to compromise and failure.

It is an obtrusive fact that there is rampant and plaguing corruption in India. But what is being purported is that it is the cause of the crisis of the system and society. In reality it is the effect and product of a system in terminal decay. The deafening din of corruption under nationalisations was a travesty. It is true that under state capitalism, corruption and inefficiency are inevitable diseases, but the corporate media charade that by privatisation and deregulation corruption would be eliminated has been rejected by reality. The restoration of capitalism in China and the introduction of “neo-liberal” economics in India have proved that corruption has multiplied instead of diminishing. Manmohan Singh was a hero of corporate India and imperialism for decades.

Now when Indian capitalism is drenched in ever deeper crisis and the rates of profit of these vultures are not rising fast enough, they want the state to further withdraw from infrastructural sectors like health, education, electricity, transport, mining, etc. These captains of corporate capitalism, who themselves are drenched in corruption and crime, are shouting raucously against corruption to sideline and defuse their own outrageous scandals that are coming out at the present time. They have stashed away $ 1.4 trillion of this black money in Swiss banks. It is no surprise that the stalwarts of the so-called ‘progressive’ bourgeoisie of India, the Ambanis and the Tatas, are portraying Narendra Modi as the future political leader of India. The stench hanging over India is not really about trillions of rupees siphoned away in corruption. It is about perpetuating an exploitative class-based system through so-called parliamentary democracy.

If Anna Hazare is a dubious character, it is nothing new for India. If democracy, cricket and nationalism are the opium of its people, hypocrisy is the hallmark of its leaders. The whole history of politics of the ruling class and its most renowned leaders has not been dissimilar. Sarojini Naidu, a distinguished poet and one of the main leaders of the Congress, was a contemporary of Gandhi. He was neither Buddha nor Jesus for her. She called him half-mockingly Mickey Mouse. Gandhi mostly responded generously. But when at a meeting Naidu told the Congress high command in his presence, “Do you know, Bapu, how much it costs us to keep you in poverty?” he went pale in concealing his anger.

If anything the social, economic and political situation has deteriorated much further. Arundhati Roy wrote in The Hindu last week, “Will the 830 million people living on Rs 20 a day really benefit from the strengthening of a set of policies that is impoverishing them and driving this country to civil war? The awful crisis has been forged out of the utter failure of India’s representative democracy, in which the legislatures are made up of criminals and millionaire politicians.”

What we are witnessing is not a revolution but mendacity. But more than a billion Indians are yearning for emancipation. The mighty Indian proletariat has led gigantic movements in the past, with militant traditions. The betrayals of the left parties and trade union leaders have been manifest time and again. In spite of the setbacks, the youth and the toilers shall rise again and carry out a socialist transformation. It is the writing on the wall. Dare to read it?