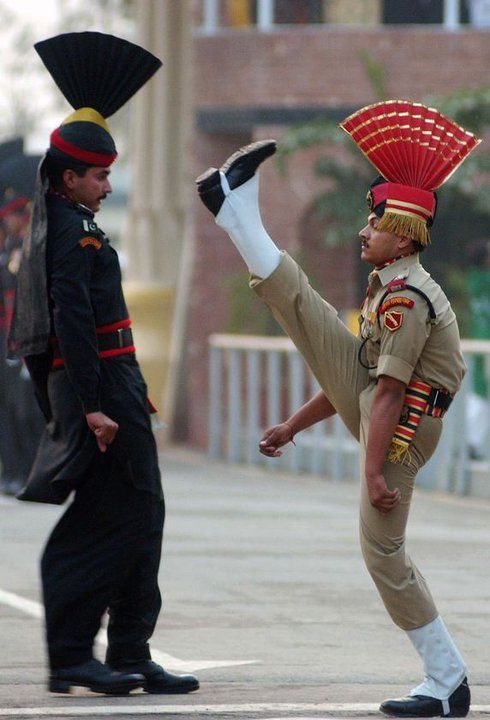 The famous Prussian military theorist, Carl von Clausewitz, once wrote that “war is the continuation of politics by other means”. In the South Asian subcontinent the threat of war and the process of peace are also used as a device of deception for domestic consumption.

The elites of India and Pakistan have used the turbulent relationship between them, blowing hot and cold, mainly to divert the social revolts in their countries. When this campaign loses steam and begins to exhaust itself, they switch over to the facade of peace and friendship. Meanwhile, in each and every situation, they continue to arm and spend extravagantly on a military build up. They have fought three and a half wars and have started peace processes more than a dozen times. But the reality of the recent period is that they can neither afford to go to war nor can they sustain a durable peace.

Yet despite this we are once again being told that talks have begun and the stalled ‘composite dialogue’ is going to restart. Talks between the Indian and Pakistani rulers, bureaucrats with ossified mindsets, are like ‘one for the road’ and the road never ends. Ultimately, the masses find themselves in another hangover with the threat of war hanging over their heads like the sword of Damocles. It is a vicious cycle where the process of ‘talking about talks’ is regularly punctuated with events that heighten tensions and scar the hope of the vast majority of ordinary people who in fact have no real enmity with their class brothers and sisters on either side of the divide.

This absurd drama begins with the first act of tit for tat expulsions of low ranking diplomats. Then the religious bigots start to breathe fire and soon the liberal and the secular elites join in this chorus of argumentative chauvinism. It all seems to be meticulously orchestrated by those vested interests who gain billions by these tensions and the military build up, but at the same time are trying to avert a full scale war between the two nuclear armed states.

It’s not just the top brass of the two militaries that benefits from these ‘dangers of war’ but the imperialists too have high stakes in this gimmickry of war and peace. India is now the world’s largest buyer of conventional arms. The second largest importer was China, followed by South Korea and Pakistan. In GDP terms Pakistan spends even more on weapon purchases. This arms race keeps on filling the coffers of the military industrial complexes, especially in the United States. The flagrant amount of money spent on nuclear programmes in the subcontinent, if used under in a planned economy, would have been sufficient to eradicate illiteracy, disease and poverty from the region.

And this nuclear madness continues to bleed the economies of the two countries. Misery, poverty and disease stalk the land. Imperialist businesses and officials are embedded as much in India’s politics as in those in Pakistan. A Guardian article reveals the brazenly mendacious and venal ruling class and its democratic farce as subservient to imperialism and a keep of the corrupt nexus of corporate power. It says, “In 2008, the aide to an old courtier of the Nehru-Ghandi family showed a US diplomat two chests containing $25 million in cash money to bribe members of Parliament into voting for an India-US nuclear deal, itself a prelude to a massive US arms sale to India.....Hindu nationalist BJP are at pains to reassure American diplomats of their pro-US credentials, even dismissing their murderous Hindu nationalism as opportunism, a mere ‘talking point’ ”.  Above all, throughout their existence, Indian and Pakistani politicians and generals have been the beneficiaries of hefty kickbacks from the makers of these weapons of mass destruction through these ‘deals’.

The diplomatic negotiations are intentionally prolonged and delayed. Some of the most simple of the issues, like Sir Creek, Saichen and others that can be resolved in a single round of talks, are made to rankle on. Most of the negotiations are about the structure of the talks and the setting of their agendas. By the time these technicalities are decided upon, some incident or event erupts and the process of talks is cancelled or postponed. And then the whole process has to restart from scratch. And this has been going on for 64 painful and tumultuous years. The Kashmir issue has been shuffled from one burner to another. The Indian and Pakistani ruling classes have wreaked havoc on the masses in Kashmir as elsewhere in the subcontinent. This wound, consciously inflicted by the British imperialists at the time of partition, continues to bleed and fester.

However, there is a growing awareness amongst the youth and workers of Kashmir that within the present setup there is no solution to their woes. They are now increasingly involved in socio economic struggles and fundamentalism has been on the retreat for quite some time now. The realisation amongst the Kashmiri masses of the need to link the national liberation movement with the class struggle in the rest of the subcontinent is palpable. The increasing disputes about the allocation of water show the geographical futility of partition. These disputes are going to be aggravated in the coming period and will further destabilize the situation.

The dilemma of visas is painful for the toiling classes of the subcontinent. The ‘civil society’ peace processes have been limited to demanding the rulers of both countries to bring some sanity, to relax the visa regime and to promote friendship. How naïve! The ruling classes, the belligerent states and imperialism need this sort of a two-pronged relationship. After all the partition took place when it became clear to the British and the local Hindu and Muslim bourgeoisie that the  struggle for independence  was not going to stop at the stage of national liberation but would move on to a social revolution that would abolish capitalism and put an end to the imperialist plunder.

The wounds of partition are frequently pricked to provoke religious hatred. Hindu and Islamic bigotry feed upon each other and sprout venomous chauvinism to divert the class struggle. There can be no peace or friendship between the two antagonistic states within the confines of capitalism. Nor is any issue going to be durably resolved by the present ruling classes. A socialist revolution in any of these countries would transform the whole region. It is only through a voluntary socialist federation of South Asia that peace and prosperity can be achieved in this subcontinent that has 22% of the world’s population and hosts 40% of the planet’s poverty.