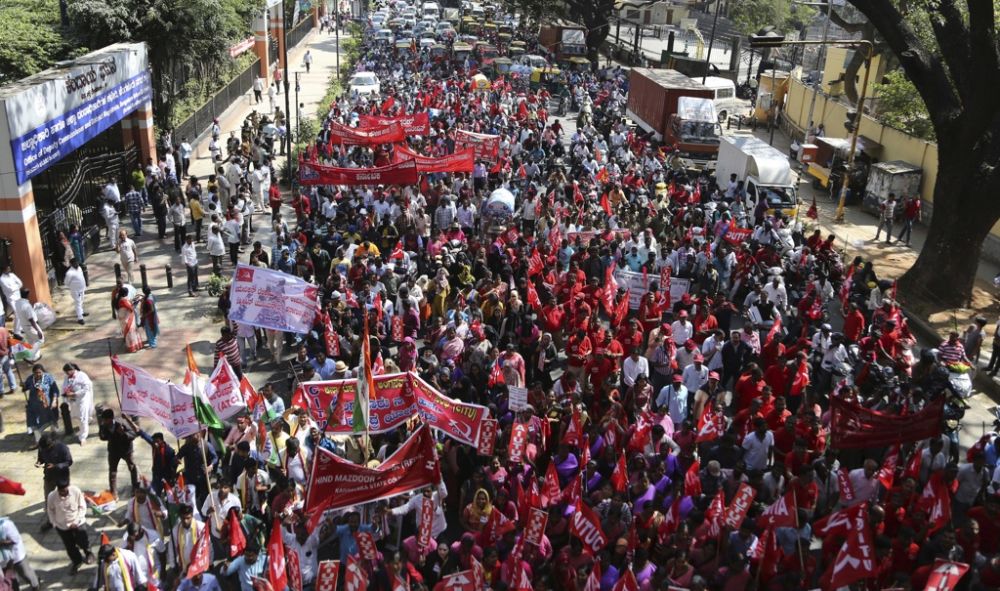 On 8-9 January, around 200 million workers went on a two-day strike across India, bringing the country to a grinding halt. The strike was called by 10 central trade unions of India against the anti-labour policies of the Modi government. BMS, affiliated with RSS-BJP, was the only central trade union that was against the strike and tried to sabotage it. All others supported the strike and made huge efforts to make it successful.

Public sector workers from the railways, banks and power stations participated with full force in this strike, along with workers from the private sector, including the mines, industrial sites, transport and even small traders. According to the reports of trade unions, a large number of informal workers also participated in the strike, including workers from the construction sector, street vendors, domestic and home-based workers, auto-rickshaw and agricultural workers.

This is being claimed as the largest ever strike in world history, as it also got huge support from farmers and students across the country. Farmers have been protesting many months huge numbers across different states against the callous attitude of the government and their falling living standards, which have driven them into extreme poverty. The general strike gave them an opportunity to unite with the industrial and public sector workers to press their demands. Students from various universities, including JNU, have been protesting against the government for many years now, and they also joined hands with the workers to raise their demands.

over 150 million workers on a two-day national strike in India ... but you won't have heard it on the news #WorkersStrikeBack pic.twitter.com/0kyzBWBqjA

The strike was called by a National Convention of Workers, held in September 2018, and agreed jointly the 10 central trade unions. The 12-point charter of the convention includes demands against price hike, unemployment, privatisation of public sector units, and contract labour, amongst other things. The trade unions also demanded universal social security cover for all workers, a minimum wage of Rs. 18,000 per month, assured pensions, the abolition of contractual labour and end to employer-friendly labour law amendments.

A challenge to Modi’s government of the rich

The working class in India has suffered greatly under the Modi government, with price hikes and unemployment reaching unprecedented levels, while the loot and plunder by big business have achieved new heights. Modi won the election in 2014 on the slogan of "Vikas", or “progress” and vowed to produce 10 million jobs every year. After the failure of the Congress government, these promises attracted huge numbers of people, who voted for BJP ignoring their extreme, right-wing fundamentalist background. But during his rule, Modi has been unable to deliver on any of his promises, while giving huge benefits to the filthy rich at the top of big business.

In December 2018, the official unemployment rose to 7.4 percent, which is the highest rate in the last 27 months. According to a report by the Centre for Monitoring Indian Economy, the country lost around 11 million jobs in 2018. Most of the job losses were in the rural areas but IT sector of India has also faced big job losses in recent years. 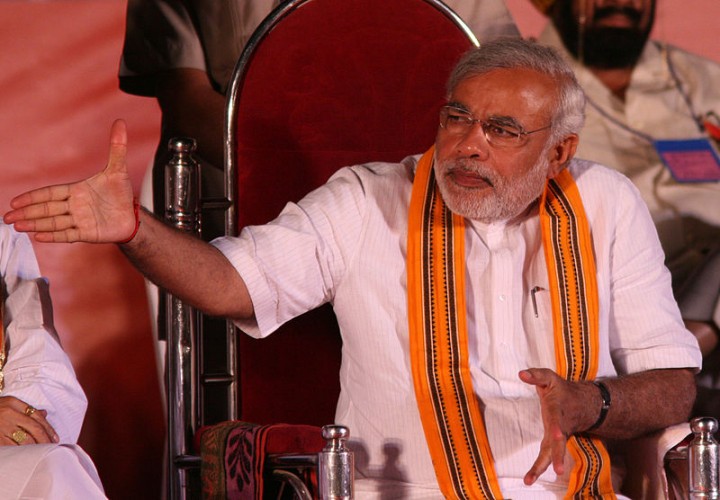 The anti-labour policies of the Modi government have brought misery to more and more workers in recent years / Image: Al Jazeera

Apart from job losses, the recent surge of price hikes has also affected the workers in the most devastating way and deprived them of their meagre savings. Wages have not increased in proportion with inflation and the lives of these workers have become unbearable as a result. In an interview with News Click on the day of the strike, many workers in Delhi talked about their plight, saying that they are earning from Rs. 7000 to 12000 per month (about $100-$170 USD) after 12-hour working days. The workers demanded the government raise the minimum wage to Rs. 18000 per month to make ends meet.

The industrial workers also have to work under precarious conditions, mostly without safety equipment. In the construction sector especially, which has grown rapidly in recent years, on-site deaths have become a common phenomenon, but still, the workers continue to do their jobs because they have no other option. If they leave, they will have to face death from hunger.

The Modi government has also introduced fixed-term employment to make it “easier” to do business. This means that an employer can hire a worker only for a specified project or a specified time without any further requirements. This has led to much deeper exploitation of the workers, who face dangerous conditions and extremely low wages. The trade unions have demanded the end of this law, along with other anti-labour amendments to existing labour laws.

The public sector workers also came out in big numbers in this strike. They were demanding an end to FDI in the public sector, which has left hundreds of thousands jobless. The central trade unions have demanded an end to privatisation of areas of the public sector under the control of central or state governments, especially railways, insurance and defence.

The workers of the Life Insurance Corporation held a demonstration at the Jeevan Bharati Building in Connaught Place in Delhi on 8 January. The leader of the All India Insurance Employees Association addressed the demonstration there. Talking with the media, Anil Kumar Bhatnagar, Vice President AIIEA said that two public sector insurance companies have already been privatised by the government, while others are also being targeted. The labour leaders said that rejection rate in case settlements in public sector companies is 3 to 4 percent, while in private sector ranges from 25 percent to 40 percent. Private insurance companies are looting the common citizens but the government is still hell-bent on privatising existing public sector companies, which will then lay off thousands of employees.

The General Secretary of the All India Trade Union Congress (AITUC), Amarjeet Kaur, talking to Press Trust of India claimed that in five states, life came to complete standstill on the first day of the strike. These include the eastern states of Assam, Manipur, Maegahalya and Odisha, along with the southern state of Kerala where communist parties are ruling. In these states, all types of establishments, including schools, colleges, hospitals, post offices, banks and industrial sites, remain closed.

Kaur also said that, in the rest of country, banks and postal services were affected. In many states, the trade union activists staged demonstrations to stop trains, causing a disruption of the railway service. Reports of such actions came from Odisha, Tami Nadu and other states as well.

The strike was observed in West Bengal, and clashes were also reported between the leaders of the CPI(M) and the police in various places. In the northern state of Jammu & Kashmir, the leader of the CPI(M), Yousaf Tarigami, led a demonstration in Jammu and spoke against the anti-people policies of the Modi government.

The strike was also observed in small islands and tribal areas of the country, showing its huge breadth and strength. One of the 12 demands raised by the trade unions includes withdrawal of Land Acquisition Amendment bill/ordinance. This amendment has affected more than one million people living in tribal areas, allowing local and multinational companies to bypass their rights and confiscating their land without any compensation.

The lie of capitalist “progress”

This was the third general strike against the Modi government by the central trade unions, and the most powerful. The anti-labour policies of the Modi government have affected more and more workers in recent years and the illusion of 'progress' has lost its shine. In recent state elections, the Modi government lost elections in three states, which shows the change in mood amongst the masses. With the real class character of this pro-rich government exposed, the BJP-led regime is now using religious fundamentalism aggressively to divide and rule the country. But this strike action has once again brought class solidarity on the agenda. All the efforts to divide the masses along religious lines, not only by the government but also the opposition parties led by Congress, have been seriously challenged by this strike.

In its long tenures in power, Congress has also not solved any of the problems faced by the masses and has implemented its neoliberal agenda, leading to mass unemployment, poverty and misery across India. Modi continued those policies more aggressively, which has led to more poverty and destitution among the masses.

The policy of state capitalism has also failed miserably in India, which was the hallmark of the Congress-led governments before 1990. The Soviet bureaucracy supported this Nehruvian model and called it a sister economy. After the collapse of the Soviet Union, India turned toward liberalisation and privatisation of the economy. Installing Manmohan Singh from the World Bank as India’s Finance Minister first, and later as prime minister for two consecutive terms, the road taken was to open up the economy for the loot and plunder of multinational companies. FDI was prescribed as the cure to all ills, but this eventually intensified the class divide, and poverty and misery have risen to unprecedented levels. Under Modi, neoliberal policies have achieved new heights, creating a divide between the rich and poor in India never seen before in history. Last month, India's richest man, Mukesh Ambani, spent an estimated $100 million on his daughter's wedding, while millions are struggling to survive the harsh, cold weather, while facing hunger and disease.

All this has created seething anger and frustration among the working class, which can be seen in numerous protests and agitations, involving hundreds of thousands in recent years. The communist parties have also not offered a way out for the masses during this impasse and have degenerated into corruption and dirty parliamentary cretinism. These Stalinist parties have ruled different states over last four decades but have again and again succumbed to the whims of capitalists and attacked the working class and rural poor under their rule.

This strike has once again posed a challenge for political leadership, that can lead the working class out of the oppression of capitalism, through a socialist transformation of the society. The current leadership of the communist parties is completely rotten and unable to offer a way out. It is up to the new generation of workers and students to unite and move toward a socialist revolution by revisiting the ideas of Marx, Engels, Lenin and Trotsky, on the correct lines.