Hands Off Venezuela, Bolivia Solidarity Campaign and others would like to express our solidarity with the Bolivian president Evo Morales, with the revolutionary workers and peasants of Bolivia, in the face of the blatant imperialist aggression which held the president against his will in Vienna for over 14 hours. 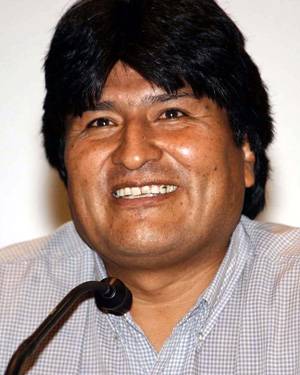 In the evening of July 2nd, Bolivian president Evo Morales was flying back to his country after having attended a summit of gas exporting countries in Moscow. His plane was denied air space passage and landing rights by France, Portugal and Italy which put the personal safety of all those on board at risk. The plane was therefore forced to make an emergency landing at Vienna airport. The Bolivian Foreign Affairs Ministry declared that the reason for this unprecedented violation of international law was the unfounded rumour that Edward Snowden was on board the plane.

By 4 am local time, both France and Portugal had changed their position, only after strong protests by the Bolivian authorities and a stern denial that Snowden was on board. Then it was the Spanish government which refused Morales the right to use its airspace. By 6 am the Spanish authorities offered to open their airspace only if they were allowed to search and inspect the plane. Evo Morales rejected the demand which was clearly illegal.

It was only after 9.30 am that the Spanish authorities finally gave permission for president Morales plane to fly over Spain. The Austrian police then conducted a passport check on all passengers of the plane. It was not until 11.30 am that the Bolivian Air Force 1 plane finally left Vienna airport. The democratically elected president of Bolivia had been held against his will for over 14 hours.

Source: In solidarity with Evo Morales