Details
In Defence of Marxism
14 October 2022 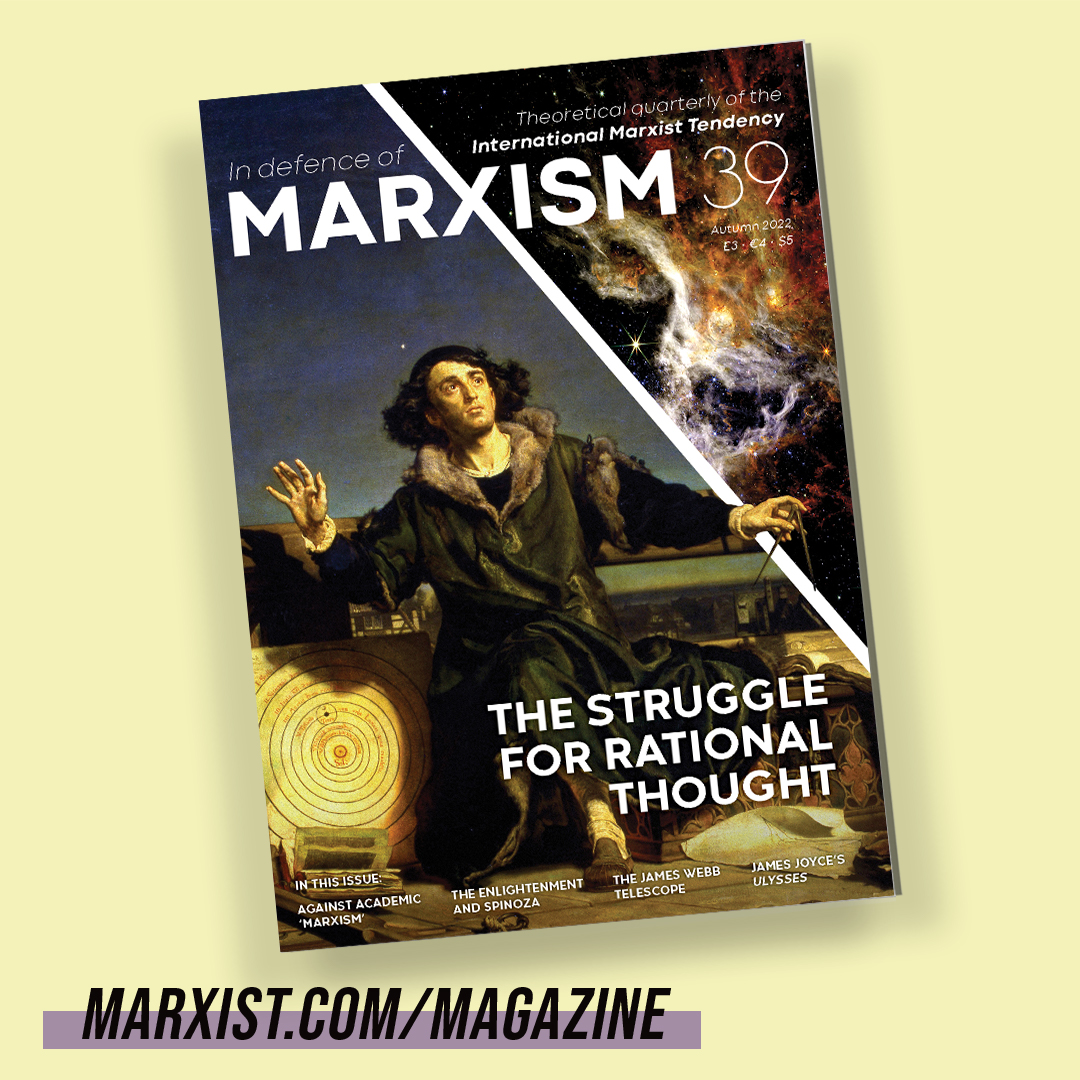 The latest issue of In Defence of Marxism (#39), the theoretical journal of the IMT, is launching tomorrow, featuring four articles around the theme of the Enlightenment and the struggle for rational thought. Order your copy today!

Alan Woods explains in his editorial that the rottenness of the capitalist system can be seen through the unravelling global economic and political situation. The future of civilisation itself is at stake, and a storm of class struggle is gathering. Only socialism can prevent humanity from falling into barbarism.

In The Frankfurt School’s Academic ‘Marxism’: Organised Hypocrisy, Daniel Morley shows how in the 20th century, petty-bourgeois, so-called Marxist academics including Marcuse, Adorno and Horkheimer rejected not only the ideas of genuine Marxism, but also the rational, scientific outlook of the Enlightenment, which they regarded as the source of society’s ills. They developed an extreme pessimism, and regarded post-war capitalism as having overcome its internal contradictions. Their reactionary ideas have exerted a pernicious influence ever since.

In The Enlightenment and Spinoza’s Revolutionary Rationalism, we explore Baruch Spinoza’s historical role in the struggle for rational thought. This great philosopher subjected all existing dogmatism and prejudices of the church and state to a merciless criticism. His ideas contained a materialist and atheistic kernel. As Hamid Alizadeh explains, it is we, the Marxists, who proudly claim the best revolutionary traditions of the Enlightenment and we reject the slanders of the postmodernists, Frankfurt School, etc.

From there, we enter the fray of modern cosmology. In The James Webb Telescope: An Eye onto a Universe, Infinite in Time and Space, we look at how the latest images from the James Webb Space Telescope have created further serious problems for modern cosmology, stretching the Big Bang theory to its limit. This article by David García Colín and Vincent Angerer discusses the philosophical crisis in cosmology, and the light that the philosophy of Marxism, dialectical materialism, can shed on the question.

Lastly, One Hundred Years of James Joyce’s Ulysses by John McInally looks at this revolutionary novel, claimed by some to be the greatest written in the English language in the 20th century. McInally challenges the view that it is apolitical, explaining why it should be on the reading list of every thinking worker and youth.

We are sure that revolutionaries fighting for a future society free from the chains of ignorance and superstition will find this to be a highly educational and stimulating read. Click here to order your copy now.