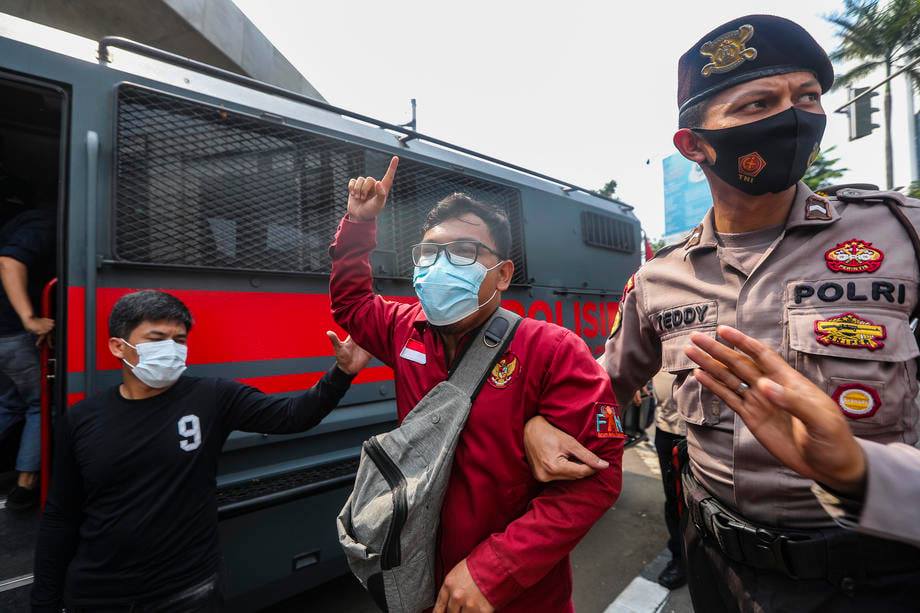 A number of activists, including members of Perhimpunan Sosialis Revolusioner (PSR), the Indonesian section of IMT, were arrested as they gathered to protest the arrival of Myanmar coup leader General Min Aung Hlaing in Jakarta for the ASEAN summit this Saturday. While Indonesian President Jokowi preached democracy to the Myanmar General, he ordered his own police forces to silence protesters.

In order to ensure the stability of the summit, and particularly not to embarrass their Myanmar guests as all eyes are fixated on them during this meeting, the Jokowi government mobilised more than 4,000 security forces to prevent any demonstration. Layers and layers of plainclothes police officers were stationed around the ASEAN secretariat building where these leaders were meeting. Members of PSR were encircled by more than a dozen police and swiftly arrested without any just cause. They were being told by the police that they were being “secured”, the notorious New-Order-Era double-speak for unlawful arrest.

There were great expectations from many people that the ASEAN summit would put pressure on the military regime, which has so far soaked their hands in the blood of more than 700 people. But the ASEAN is nothing but a club of robbers, created to facilitate the capitalist plundering of Southeast Asia. Once again, it has proven itself to be exactly that. Those who have illusions toward the ASEAN would do well to remember that, throughout its existence, it did not say anything against the murderous Soeharto regime. Why would it do anything different now with the military coup in Myanmar?

Yet, amidst a politically-charged world, these leaders were well advised that they should say something, lest the people they rule over start connecting the dots, that there is fundamentally no difference between their own governments and the military dictatorship in Myanmar. Diplomatic skills were deployed during this meeting, where the ancient art of saying something and nothing at the same time were on full display.

Hypocrisy by the regime, solidarity from the masses!

The ASEAN summit issued a Five-Point Consensus, which was touted as a breakthrough for the crisis in Myanmar. The democratic movement in Myanmar rightfully condemned and rejected it.

The first point of this Consensus is already an insult to the people of Myanmar and all thinking persons: It calls for an “immediate cessation of violence” and that “all parties[!] shall exercise utmost restraint.” But who is killing who? Whose violence is responsible for the massacre of more than 700 men, women, and children? The comment by Malaysian Prime Minister Muhyiddin Yassin summed up the spirit behind this consensus when he said: “we tried not to accuse his side too much because we don't care who's causing it.” 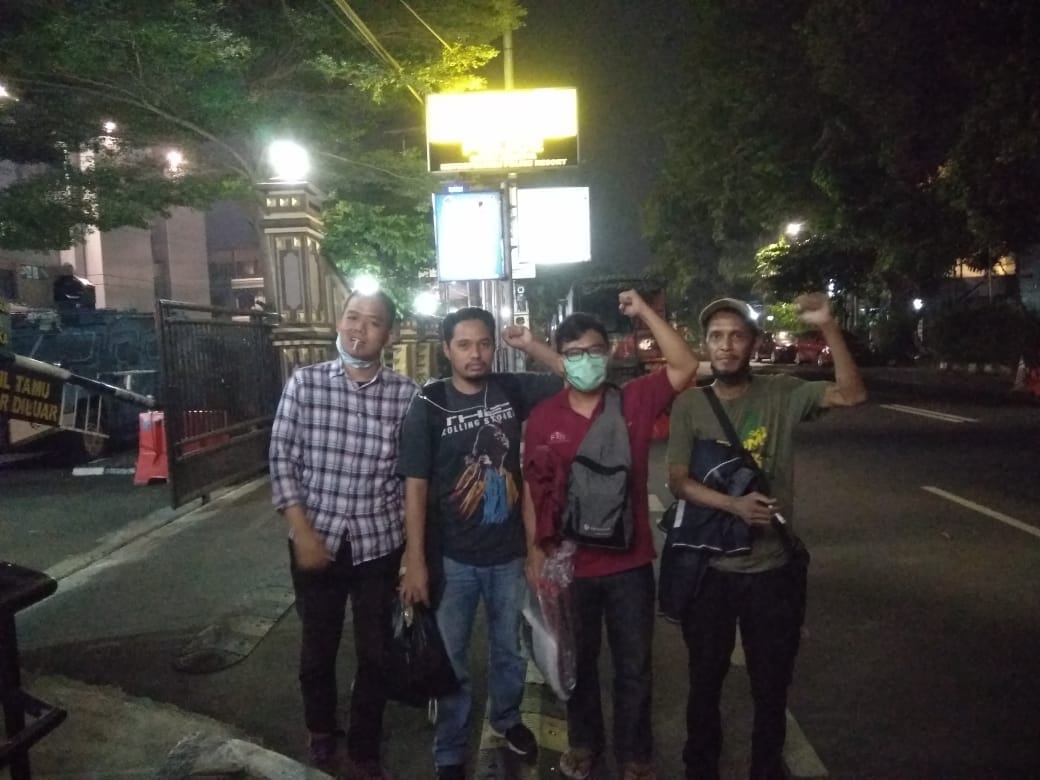 The only genuine solidarity that the working people of Myanmar can rely on is from their class brothers and sisters in Indonesia and beyond / Image: Front Muda Revolusioner

But the working masses of Myanmar very much care who is causing the violence: namely, the military. This consensus has served its diplomatic purpose: to condemn violence, without pointing out who is responsible for this violence. As Trump once said of the Charlottesville far-right rally, in which an anti-racist counter-protestors was killed: “there are very fine people on both sides.”

The second point calls for a “constructive dialogue among all parties.” But we were long past the point of any constructive dialogue when the generals have enacted their coup and drowned the people in blood. Dialogue is impossible when one side is armed to the teeth, while the other side is disarmed. In fact, a dialogue has never been possible when the constitution is written by one side and only accepted by the other under the threat of violence. Even these generals cannot abide to the rules that they themselves wrote to their utmost advantage. The working people of Myanmar have understood that the military only recognises one language: that of militant mass actions.

Finally, the consensus commits the ASEAN to provide “humanitarian assistance.” More bandages and antiseptics will not stop the batons and the bullets of the army. The self-organisational capacity and resources of the movement are more than adequate to provide the medical care needed to tend to the thousands and thousands of people that have been brutalised by repression. This call for humanitarian assistance is yet another smokescreen, when what is needed now is an armed defence, made up of workers’ guards, to face head-on the brutality of the army and end its military dictatorship.

The only genuine solidarity that the working people of Myanmar can rely on is from their class brothers and sisters in Indonesia and beyond. No trust should be placed on the so-called “International Community”: the ASEAN, the UN, and the like. The unlawful and indiscriminate arrests of Myanmar solidarity activists by the Jokowi government clearly exposes the hypocrisy of this regime, which preaches democracy while strangling it at the same time. Revolutionaries in Myanmar, Indonesia, Thailand, Singapore, and the rest of Southeast Asian region face a common enemy: the dictatorship of capital.

Solidarity with the Myanmar Revolution!

For a revolutionary overthrow of the junta!