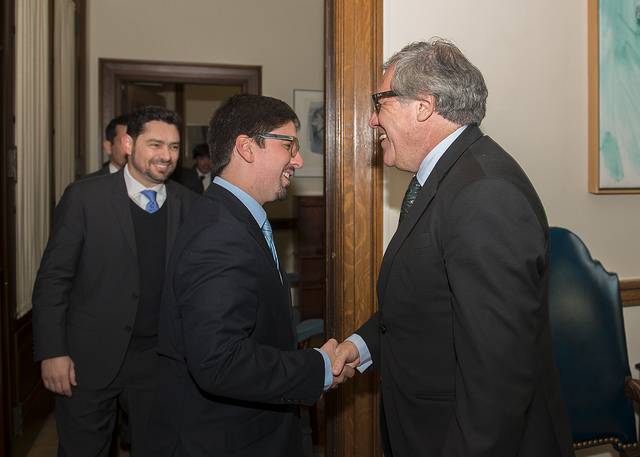 “There’s been a coup in Venezuela! Maduro has carried out a power-grab!” Just a few days before the 15th anniversary of the short lived coup against the democratically elected president Chavez (11-13 April, 2002), those who carried out that coup (the Venezuelan oligarchy, their masters in Washington and its lapdogs in Buenos Aires, Brasilia, Santiago de Chile and Lima, cheered on by the media wolf pack in Madrid and the US) are now shouting and screaming like hyenas against an alleged “self coup” by president Maduro.

What are the facts? The immediate cause of this hypocritical outcry is the ruling of the Supreme Court of Justice (TSJ) on March 29 which said that since the National Assembly is in contempt of court, the TSJ will henceforth take over its powers for itself or another power it determines. Immediately, the president of the National Assembly, Julio Borges, declared this as a “coup d’Etat” and Organisation of American States general secretary Luis Almagro described it as a “self coup” and called for the urgent convening of the OAS Permanent Council in order to activate its Democratic Charter against Venezuela. The Peruvian government decided to withdraw its ambassador from Venezuela. 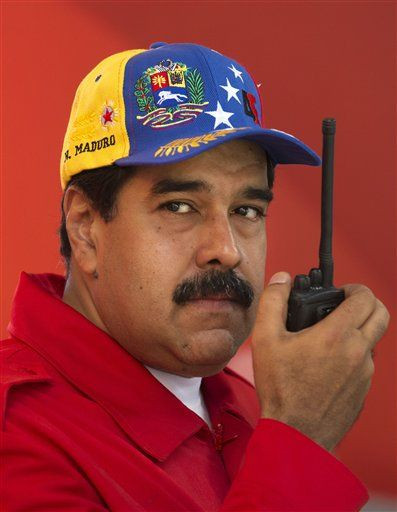 In a further escalation of the institutional conflict, in October 2016, the National Assembly voted to initiate proceedings for a “political trial” of president Maduro and also proceedings to declare that Maduro had “abandoned his office”. Amongst the reasons given for these actions was the allegation that Maduro is not a Venezuelan citizen and therefore unable to be president (!!). Finally in January 2017, the National Assembly declared that president Maduro had indeed “abandoned his office”. How can he be accused of “abandoning his office” and of “carrying out a power grabbing coup” at the same time is anybody’s guess. The National Assembly furthermore called on the Organisation of American States to invoke its Democratic Charter against Venezuela, in effect calling on foreign powers to violate Venezuelan sovereignty, something which reveals clearly the character of the Venezuelan oligarchy. The attempt to use the Democratic Charter was defeated at the OAS, despite direct threats from Washington against a number of member countries.

Finally, the government enquired from the TSJ whether it needed to send its decision to create joint venture companies in the oil sector to be ratified by the National Assembly. The TSJ replied with its ruling on March 29, that, since the National Assembly was in contempt of court and had not taken any actions to rectify that, the government did not have to send its decisions to it and that the TSJ was taking over National Assembly legislative powers to exercise them directly or through any other organ of power it would determine. That ruling had been preceded by one a day earlier in which the TSJ ruled that since the National Assembly was in contempt of court, its members could not enjoy parliamentary immunity.

If the opposition National Assembly wanted to actually use its powers, it would be easy to abide by the TSJ ruling on the three Amazonas deputies and then start legislating. However, the opposition is not really interested in that, but rather wants to create an incident as big as possible, to justify the removal of Maduro from the presidency.

We must oppose the hypocritical campaign of those who actually did carry out a coup in Venezuela in 2002, who now want to remove Maduro from power and to invoke foreign intervention against Venezuela. If they were to achieve their aims, we know clearly what would be the consequences: all of the gains of the Bolivarian revolution would be destroyed, the social missions abolished, nationalised companies and landed estates returned to their former owners, the labour law would be abolished allowing for mass layoffs in state and private enterprises, old age pensions massively cut, health care and education slashed and a regime of assault on basic democratic rights instituted. If anyone doubts this, you just need to see the initial measures taken by right wing governments as they have come to power in Argentina and Brazil. In Venezuela it would be ten times worse.

However, this is not just a question of who is right and who is wrong from a legal or procedural point of view. Like all fundamental issues in society, this is going to be resolved on the basis of who holds real power, in terms of the armed forces and/or mass mobilisation of the people in the streets which can break that state power. At the moment it does not seem that the reactionary opposition holds either. They have made constant appeals to the Army to come out “in defence of the Constitution” (read: to remove Maduro) which have so far fallen on deaf ears. Their most recent attempts to bring people into the streets in September and October 2016 completely floundered for the lack of a clear and decisive strategy. Some of the opposition leaders called for a march on the Miraflores presidential palace, but when the day came they backed off, provoking anger and demoralisation from their own followers.

Concessions to capitalists undermine the revolution 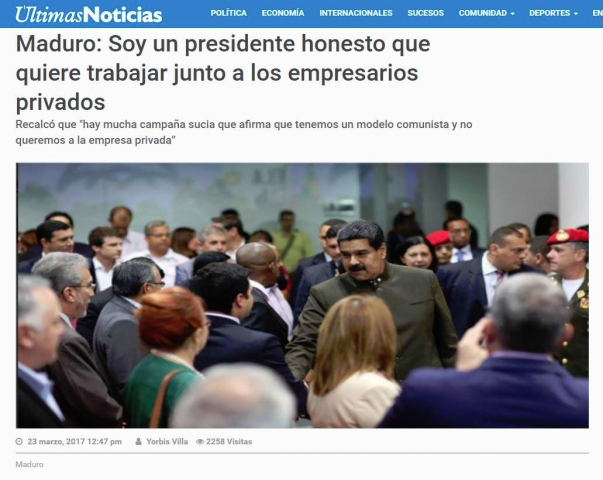 Maduro announcing concessions to capitalists - Photo: ScreenshotBeyond the legal and institutional questions, we have to ask ourselves what is Maduro’s government doing with its power? What is its strategy? A few days ago, Nicolás Maduro made a number of statements at the Expo Venezuela Potencia 2017 trade fair, which leave no doubt as to the fact that his strategy is one of making ever growing concessions to the capitalists, national and international. He rejected what he called was a “dirty campaign which says that we have a Communist model and we reject private enterprise”. On the contrary, he said, “90% of the economy is in the hands of private companies” (In fact what he meant to say was that 90% of all companies are in private hands, though they represent a smaller percentage of the economy.) He then proceeded to announce further concessions to the capitalists, national and foreign, by giving them loans from state owned banks, both in Bolivars and in dollars, and by further liberalising the foreign exchange controls so as to allow private companies easier access to dollars (which come from the profits of the oil industry).

These statements and actions have provoked widespread anger and unease amongst the ranks of the Bolivarian movement. They are a continuation and a deepening of the policy which the Maduro government has been following since it was elected: to respond to the attacks of the opposition in the political and institutional arena, while making ever more concessions to the capitalists in the economic field.

That is a policy which leads directly to disaster. The Venezuelan economy is in a deep crisis, with hyperinflation, serious scarcity of basic food products and medicines and a paralysis of production. This crisis is the result, in the last instance, of the rebellion of the productive forces - which continue to operate under the framework of a capitalist market - against the attempts of the government to regulate them, through price controls and foreign exchange controls. This has been aggravated and multiplied by the collapse in the price of oil in the world market. Faced with severely limited hard currency reserves and oil revenue, the government has resorted to prioritising the payment of foreign debt over imports, which have been severely cut, further aggravating scarcity. At the same time in order to pay for the state budget, where there is a running deficit amounting to 15-20% of GDP it has resorted to a policy of printing money which in turn has led to hyperinflation. What has failed in Venezuela is not socialism, which never existed, but rather, the attempt to regulate the capitalist economy through state intervention and make it work in the benefit of the majority.

There are only two ways out of this economic crisis: one is to lift all regulations and allow the capitalist market to work “normally”, which would mean that the workers will be made to pay the full price for the crisis. That is the direction the government of Maduro has been progressively taking. The other is to expropriate the capitalists and run the economy on the basis of a democratic plan of production which can satisfy the needs of the population, while at the same time making an internationalist appeal to the workers and peasants of the region to come to the aid of the revolution and defeat the attempts of their own ruling classes to smash it. That would mean to make the capitalists pay for the crisis.

The continuation of the current policy of the government will only aggravate the crisis from the point of view of the working people, thus further eroding support for it amongst the Bolivarian masses. The government has the idea that this year will see oil prices climb up to a level around 70 to 80 dollars a barrel and that this would give it the necessary margin to invest in social programs again, and thereby recovering popular support. After that it would be able to call for elections under better conditions. This is a pipe dream. Oil prices climbed slightly after the OPEC-Russia deal to cut production, but this has been cut across because as oil prices were rising, fracking became profitable again in the US, thus increasing global production and sending the prices down again.

How to fight the offensive of imperialism and the oligarchy 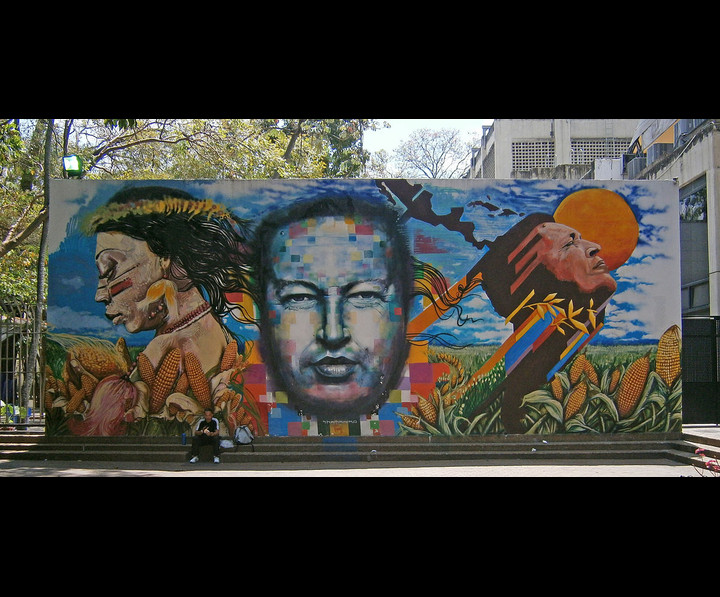 Photo: Public DomainIf we are to be frank, the policy of the government represents a betrayal of the legacy of president Chavez. In his last statements before his death, the Golpe de Timón (Turn the Rudder) and the Plan de la Patria Socialista (Socialist Country Plan), Chavez stressed two key ideas: a) we are still in a capitalist economy and we must move towards socialism, and b) we must destroy the bourgeois state and replace it with a “communal state” (that is, one based on the Socialist Communes). With all its limitations, these were correct ideas.

The current leadership of the Bolivarian movement and the Maduro government have moved in the opposite direction: in the economic field they have been making more and more concessions to the capitalists, while in the political field they have stifled all avenues of popular participation, workers’ control, rank and file power.

Regardless of their intentions, we must say it clearly: these policies will lead directly to the defeat of the Bolivarian revolution and the taking of power by the bourgeois opposition. This would be a disaster. In order to avert it we must return to the struggle for socialism and against the bourgeois state.

Faced with the onslaught of imperialism and the Venezuelan capitalists, what would be the most effective way to fight them? First of all, Venezuela should break diplomatic relations with Washington which is leading and coordinating this campaign. Second it should expropriate the property of all multinational companies from any country involved in this gross interference in Venezuelan national sovereignty. Thirdly, it should expropriate the properties of the Venezuelan oligarchy which has been constantly plotting against the will of the people for the last 15 years. Fourthly, anti-imperialist and anti-capitalist committees of workers, soldiers and peasants should be formed in every company, factory, barracks and in the countryside. These committees should be armed and exercise workers’ control against the sabotage of the oligarchy. Finally, the Bolivarian revolution should make an appeal to the workers and peasants of Latin America and the working class of the world to come to its aid and block the attempts of reactionary governments to intervene against it.

That is the only policy which can guarantee the defence of the revolution.