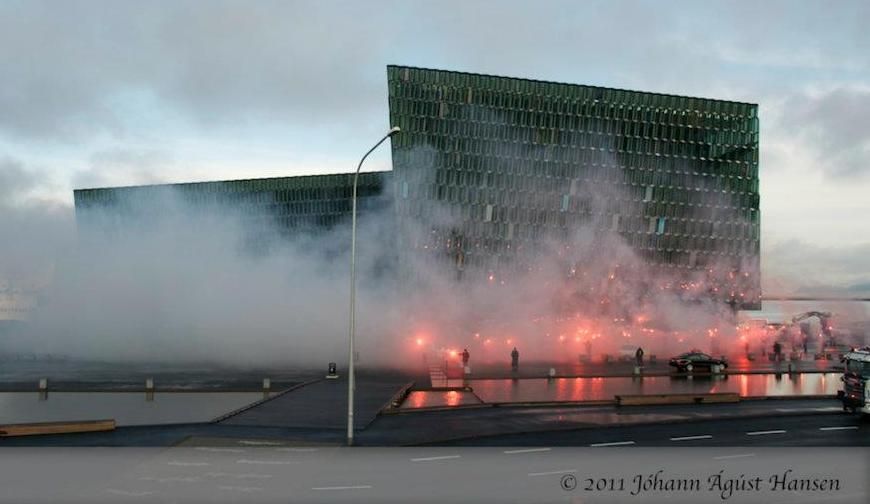 Iceland has often been cited as a model of how to solve the economic crisis, being presented as an example of recovery without austerity. As we have pointed out before, this is far from the truth, as any person from Iceland will tell you. On Sunday, the left government was unceremoniously booted out. This is the price they pay for the austerity of the last four years.

The government consisted of the Social Democrats (Samfylkingin) and Left-Greens (Vinstrihreyfingin – grænt framboð). The former lost more than half their votes and fell from 29.8% to 12.9%, the latter from 21.7% to 10.8%. In a dramatic turnaround this means that the Independence Party, the traditional party of the Icelandic bankers and speculators, will now be back in government. However, its 26.7% (up from 23.7%) cannot be seen as a massive victory for this party. The electorate have not forgotten what they did last time they were in government.

The real “winner” is the Progressive party, which almost doubled its votes from 14.8% to 24.4%. Sigmundur Gunnlaugsson, the leader of the Progressive Party, like so many right-wing leaders in Europe, put forward a nationalist agenda. He opposed EU accession and also the Icesave deal, so hated by the Icelandic electorate. This means that the new government will inevitably be a right-wing coalition of the Independence Party and the Progressive Party.

This result is a complete disaster for the left and the traditional parties of the working class in Iceland and should be taken as a warning to all left parties across Europe not to follow their example.

Like in many other European elections (notably Italy) new anti-establishment formations did well. Bright Future got 8%, one percentage point more than the Citizens’ Movement in the last election. The Pirate Party managed to get 5%, while 12% voted for parties that did not get into parliament. If you combine the vote of these new formations and the blank votes that makes a total of 27.2%, which means that a quarter of those that voted did not vote for one of the four traditional parties. Turnout was also the lowest since independence at 81.4% (down from 85.1% in the last election).

It would be wrong, however, to draw the conclusion that this represents a vote of confidence in the right wing. Rather, it is a damning indictment of the failure of the outgoing government. As elsewhere in Europe, it is more a case of voting against whoever is responsible for carrying out austerity measures, than support for the right wing.

The left were voted in at the last election precisely because there was hope that by doing so austerity could be stopped. Instead, the very people voted in to put a halt to the demands of the bankers and speculators went ahead with those same policies. And now they have paid the price for this. There is in fact a profound sense of disillusionment among Icelanders towards the left. The Iceland Weather Report, for example, posts a comment it received, which is fairly typical of the general mood:

“I voted for the Social Democrats [in 2009], consider myself a hard-line centre person who maybe leans a little towards the left (especially in environmental and welfare affairs) and I had tremendous hope that they would bring about effective change. But the truth is that they have been an enormous disappointment.”

“Myself and a lot of other people consider the betrayal by the government to be colossal. Not only because they constantly gave preferential treatment to the wealthy, both overtly and covertly, but also because they took billions of Icelandic kronur from the treasury to bail out private companies like Sparisjóður Keflavíkur [bank], VÍS and Sjóvá [insurance companies]. Completely unacceptable – especially from a left-wing government. They promised, and constantly lied, that they were safeguarding the welfare system.”

Some on the left in Iceland, rather than understand what has happened, prefer to blame the workers for the results of the election. The leader of the Pirate Party, for example, puts it this way: “It is the problem of the left wing: they clean up the vomit after the cocaine party of the neo-cons, who go into rehab and then come back to reap the benefits.” The idea here is that somehow the electorate doesn’t understand all the good things that the government has done. It’s a rather condescending attitude which hasn’t got much to do with reality.

The question has to be posed bluntly: Why did the people of Iceland turn against the left parties in these elections? As the new leader of the Social Democrats, Arni Pall Arnason, admits, “the rosy picture that is painted of Iceland isn’t right.” He points to the fall in the Krona of around 50%, which means, in a country heavily reliant on imports, a drop in living standards of 30-40%.

The situation is in fact dire. Inflation is high – prices have increased by 75% since 2005! (Eurostat) Not only that, but many Icelanders were sold mortgages that were linked to the Euro. So, their mortgages have doubled, even though the value of their homes has not gone up at all. If you take into account the fall in the Krona, the overall value of homes has fallen by 40-50%.

Looking at the real picture, therefore, Iceland rather than being that model so loved by the reformist leaders of the left parties, suddenly looks a lot less like its relatively prosperous Scandinavian neighbours and a lot more like Greece.

The government, when elected, promised to do something about the debt, and any amount of a mortgage above 110% of the value of a property was written off. However, that still left many home owners in negative equity with their investment in their house wiped out and with higher bills on everything else. One of the most popular demands of the Progressive Party – which did very well in the elections – was a pledge to write down up to 20 per cent of mortgage debt through money received from the foreign creditors of the collapsed banks. It is unlikely that they will carry this out, but for people in massive debt, it must have seemed as both a necessary and fair demand.

As a way out of the crisis, the left government proposed joining the EU and adopting the Euro as if this would somehow restore the purchasing power of the Icelanders. There is no guarantee that joining the Euro now would solve the question of the weak currency. The exchange rate would have to be fixed at its present market value, and this would be of no help at all. Furthermore, Iceland would likely be dragged even deeper into crisis because of the instability of the Eurozone, presuming that the EU would allow the country in, an unlikely prospect in present conditions.

The left government also agreed to a completely unfair deal, whereby the Icelandic tax payer would be called on to guarantee the foreign debts of the Icelandic banks! The deal fell after popular resistance but the fact that both left parties were prepared to support it clearly served to discredit them in the eyes of the Icelandic workers. The Progressive Party opportunistically opposed the deal and thereby gained in the elections.

While the outgoing government put the burden of paying for the crisis onto the backs of working people, public spending was drastically cut. This was in line with the IMF’s demands when it bailed out Iceland. Total government expenditure as a share of GDP has, as a result, fallen from 51.6% to 46.5%, a bigger fall than that in the UK (51.3% to 48.5%) which has a Conservative government, although not quite as big as that of Ireland (Eurostat). The budget deficit has been brought down from 15% to a mere 1% of GDP. Further tax rises and increases in social security payments are to be expected in the coming years according to plans laid out by the IMF and the former government. (We explained the details of this in an article three years ago.)

The outgoing left government was not simply a “victim” of the mess left by the right wing, and it wasn’t just a case of failing to take action to defend the falling living standards of the workers. It actively co-operated with the IMF, and implemented the austerity programme demanded of it, offering no alternative whatsoever. As in all other countries in Europe similarly affected by the crisis, once in government the reformist left leaders, having no answer to the crisis, simply bowed down before the needs of capitalism and put the whole burden on the shoulders of working people, who can not pay.

This is the reason why the left government was punished. It failed to propose any concrete way out of the crisis for the Icelandic people. We have pointed this out before, in relation to Iceland and other countries. There is no way out under capitalism. The lesson of the Icelandic experience is that unless the left adopts a revolutionary socialist programme, unless it offers the masses the prospect of putting an end to the capitalist system, it inevitably is forced to carry out the draconian austerity measures demanded by the capitalists. That plays into the hands of the right-wing parties who can make a comeback on the electoral front. The workers and youth voted the left in to fight the capitalists, not to carry out their dictates. And once it becomes abundantly clear that these “lefts” have no answer to the crisis they are very quickly booted out.

What is needed in Iceland is not deals with the IMF and austerity policies but a socialist plan. Four years ago, we proposed the following four demands:

These demands are as valid today as they were then. In 2011, we explained the following:

“On a capitalist basis the only way the present huge financial balance can be put right is by making the workers pay. That is what the proposed changes to welfare mean. But the workers cannot afford these measures. Accepting them would mean a life of hell, a life of dire poverty. A government that claims to be of the left should not accept such policies. The only real answer is repudiation of the country’s foreign debt, combined with nationalisation of the major industries and a socialist plan of reconstruction, including investments in geothermal energy and the extraction of raw materials. Only through a national plan of production can the people of Iceland not only move out of the crisis but also ensure that they will not fall into the same trap again.”

The past couple of years have borne this out. Over the coming years, with the Eurozone entering deeper into crisis, the situation will become worse, not better for the people of Iceland. The right-wing victory seems impressive on the surface. However, they have no alternative. They are the direct representatives of the capitalist class and they will merely continue and deepen further the austerity programme. That means that soon they will face mass opposition, just like they did in 2009.

What is required is an explanation of the real nature of the crisis and the perspective of radical change. But radical change today means breaking with the capitalist system. If either of the left parties were to put forward a real fighting socialist programme, they would rapidly pick up support. In Greece last year SYRIZA grew rapidly because it was perceived as being radically on the left. Whereas where the left hardly distinguishes itself from the bourgeois parties it fails to pick up the required support to win.

If the leaders of the left parties were to draw these conclusions and act accordingly, offering a genuine socialist alternative, they would be in a position to defeat the right wing once and for all, and on that basis the situation could be transformed. Then Iceland could truly become an example for the rest of Europe to follow.