Hungary
Share
Tweet
As the realities of capitalist crisis are biting deeper into the Hungarian economy, more and sections of the working class are beginning to mobilise and take strike action.

The world financial crisis has reached the furthest nooks and crannies of the globe, Hungary included. Even before the crisis hit Hungary, Ferenc Gyurcsány's socialist government had been doing its utmost to cut public expenditure and safeguard the profits of the banks and multinationals. After getting re-elected two years ago on the basis of promising tax cuts and all manner of goodies to the electorate, reality hit his government pretty sharply and austerity has been the guiding principle ever since. The highest budget deficit of the European Union has long standing origins. Even back in the Stalinist days, the then ‘liberal' Stalinist regime of János Kádár tried to overcome its problems by taking part in world trade and thus importing all the ills of a crisis ridden capitalist system. Inflation was already a feature of his economy, only to get out of hand after the fall of Stalinism. 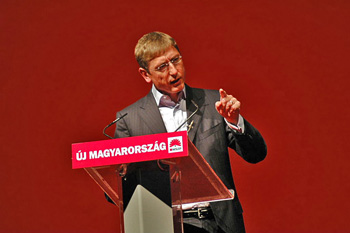 Since 1989 the ‘emerging' Hungarian capitalist economy has carried on borrowing on a scale way out of step with the growth in the real economy. There have been ‘readjustments', like the Bokros package of the first socialist government in the 90's, headed by Gyula Horn, where 30% of Hungary's industry had been laid to waste and the chronic unemployment and rise in crime, that bedevils Hungarian society today started become commonplace.

In a country as indebted as Hungary, that has been sold lock, stock and barrel to the multinationals for a song, continuous growth and prosperity is completely dependent on the health of the world economy. The domestic market, which has also been hit in the last couple of months, is fairly inconsequential in an economy producing for instant export. Redundancies have doubled in the last month with the threat of further layoffs appearing in the news daily.

The news came today that Parliament has finally voted in the matter of the 13th month bonus for state employees and pensioners. The former has been abolished and the latter restricted to those over 62 and has been capped to 80.000Ft (£250 at current exchange rates).

An interesting report on the radio today highlighted that the crisis has hit hard in industry as well as in people's pockets. An engineer, working in the electricity supply industry, reported that unlike in the previous decades, this year there are no supply problems, due to a drop in demand. He blamed the mild weather for this, but the last few years have been at least this mild, if not milder. I would guess that the factory closures, layoffs resulting in a drop in demand have more to do with this lack of usage. The population is also cutting back, which, of course, will cause real hardship amongst the poor, the elderly and the sick. 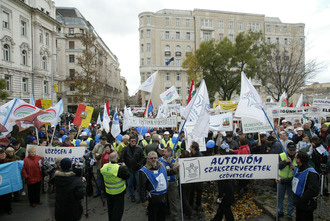 Demonstration by public service workers in defence of their wages and conditions, Budapest, November 29

Society is beginning to rise to the challenge. This week Hungary is beginning to taste the turmoil that is already here, but can only get worse in the coming months and years. Budapest Airport is still severely disrupted by an all out strike of security, luggage and other auxiliary staff, with the Malév pilots also threatening to join should negotiations not produce a successful conclusion soon. The main issues are outsourcing, reorganisation and proposed redundancies, as well as management's hawkish attitude to any of the union's requests for consideration when ununionised labour is employed. Management has been seriously belligerent in the last week or so, totally refusing to talk and only under the pressure of the airlines using the airport did they get back to the table yesterday. Results are not exactly likely to come soon, especially since recently they have imported Greek security personnel to strike break and the rumours are that they are staying and whole scale sacking of Hungarian staff is imminent.

In the meantime the railways are on strike as well: this time the issues are also manning levels, unnegotiated timetable changes, working conditions and the union's demand for a small part of the millions the railways received for selling off the goods services. The strike started on Sunday, initially only in the Eastern part of the country, but spread to the rest by Monday night. Only one railway station in Budapest is operating and that only partially. The mood is getting uglier by the minute and no end is in sight. Finally, the Budapest public transport workers have just announced a stoppage for Thursday, as redundancies are looming there as well, while the service gets worse and worse.

The fighting traditions of Hungarian labour are awakening under the horrendous pressure of the crisis of the capitalist system. What we need is a co-ordinated effort expressing not only this frustration, but also a solution to the problems in Eastern Europe and elsewhere. This early sign of the fighting spirit now in the service sector will spread to industry and other aspects of life in Hungary and in Eastern Europe in general.

We need a set of demands that not only produce a successful end to this strike wave, but one that ultimately wins the fight for a better life, without exploitation, cutbacks and redundancies. We need to tackle this decaying, rotten capitalist system and the only idea that can do that is socialism. This, and only this, can provide lasting solutions.